The price of gold increased on Inauguration Day, arousing investors’ hopes for a new bullish phase.

Ladies and gentlemen, it’s official now – Joe Biden and Kamala Harris have been sworn in as the President and Vice-President of the United States, respectively. What does this imply for America?

Well, before we move on to Biden, let’s say goodbye to Trump. You can love him or hate him, but there is no denying that the 45th presidency was excellent for the price of gold . As the chart below shows, the price of the yellow metal rose more than 50 percent since January 2017 (although gold initially declined after the election results). 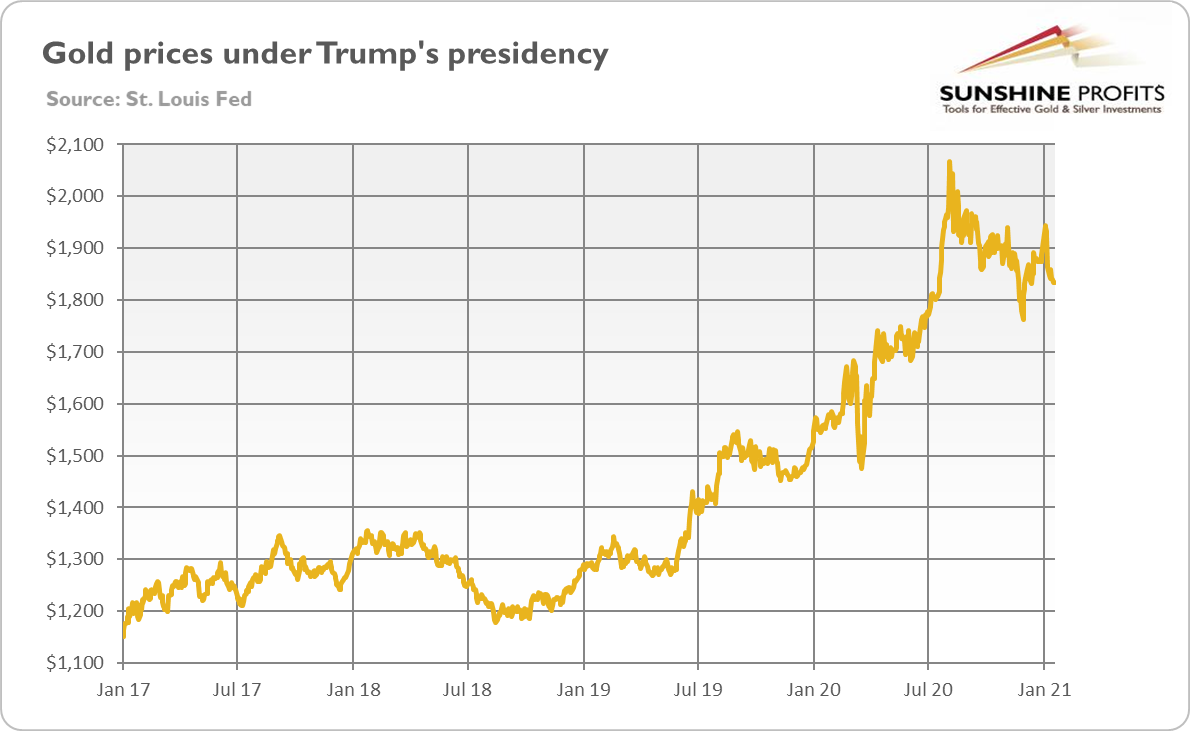 But Trump is now out of the White House, while Biden is in. What are the economic implications of this change? Well, I used to claim that people generally overestimate the impact that politics and the power of Presidents have over economic developments. However, this time may be different for two reasons.

First, Biden is going to quickly reverse many of Trump’s decisions . For instance, he is going to reverse the construction of the border wall, the travel ban targeting mainly Muslim countries, and the withdrawal from the Paris climate accord as well as from the World Health Organization. Biden will also impose a mask mandate on federal property, reversing Trump’s ambiguous stance on the epidemic in the U.S.

Second, the 46th presidency could be remembered in the future as having been fiscally lavish – and Biden seems to be determined to overshadow Trump in that matter. He has already proposed to spend $1.9 trillion to stimulate the economy – on top of previous aid packages worth more than $3 trillion. Importantly, Biden calls his mammoth plan just “the first step” and he is going to soon announce a plan for spending on infrastructure and clean energy which could be worth more than $2 trillion. Additionally, Janet Yellen , likely the next U.S. Treasury Secretary, has recently confirmed the stance of the new administration, saying that the government should act “big” to jump-start the economy, as “the benefits will far outweigh the costs” of being bold.

What does Biden’s presidency imply for the gold market? Well, we have already covered this theme in the two latest editions of the Gold Market Overview (and we will continue this topic in the next issue), but let us repeat that, from the fundamental point of view, Biden’s presidency looks promising for the price of gold . Although larger government expenditures can boost the GDP in the short run (the long-term economic impact could actually be negative), they will also expand the fiscal deficits and the federal debt .

Higher debts not only makes the economy more fragile and prone to debt crises , but they also make the normalization of monetary policy more difficult. The truth is that the U.S. simply cannot afford higher interest rates. You see, the higher the debts, the lower the interest rates must be to handle the debt servicing costs. Welcome to the debt trap . So, the Fed will have to maintain the federal funds rate at practically a zero level for a long time. The lower the real interest rates , the better it is for gold.

Oh, and did I mention inflation already? With the massive amount of stimulus injected into the U.S. economy, there is an overriding risk of overheating and increase in inflation, which would be positive for the gold prices.

So, as long as there is a strong risk appetite, hope for better politics (“this time will be different and this president will be different than everyone else and everything will change for the better”) and faster economic growth, gold may struggle.

However, when the honeymoon ends and investors acknowledge risks related to the higher fiscal stimulus, or when some economic crisis arrives and the risk appetite vanishes, gold will shine. Indeed, gold investors didn’t appear to be afraid of President Biden, as the price of gold increased on Inauguration Day.