When Will U.S. Debt Become Unsustainable?

"The critical consideration to examine here is not actually the level of debt or the ratio of debt-to-GDP, but rather the cost of servicing the debt."

With U.S. federal debt at 100.1% of GDP, the highest since World War II and rising, investors often wonder what the breaking point could be of mounting U.S. debt. The critical consideration to examine is not actually the level of debt or the ratio of debt to GDP, but rather the cost of servicing the debt. The chart on the left shows national debt soaring (gray), but the interest rate paid on that debt coming down sharply in recent decades (light blue).

This has made debt more affordable. The chart on the right shows the net interest payments on federal debt as a share of nominal GDP. Despite the surge in government debt to combat the effects of the pandemic, the cost to service this debt is much cheaper than it was in, for example, the mid 90’s to early 00’s when debt to GDP was below 50% and the government operated with a budget surplus. This is owed to the fact that interest rates are structurally lower, reducing the cost of debt. Using September CBO forecasts, interest payments would appear to be manageable throughout the next decade, but the forecast also suggests rates would remain low. This is likely in the near term, but eventually rates will rise.

If rates were to rise and the average interest rate paid were to rise to 3%, rather than the average of 1.3% forecast under current conditions, the net interest payments as a share of GDP would rise to 3.2%. This is significant because net interest payments as a share of GDP peaked in 1991 at 3.2%, which forced President George H.W. Bush to renege on his promise of no new taxes. While this may not be the absolute breaking point, it could be deemed as a point of fiscal stress by historical standards.

National debt may be sustainable in the short run, but at some point, rates will rise and deficits and debt will have to be tackled through spending cuts or tax increases. 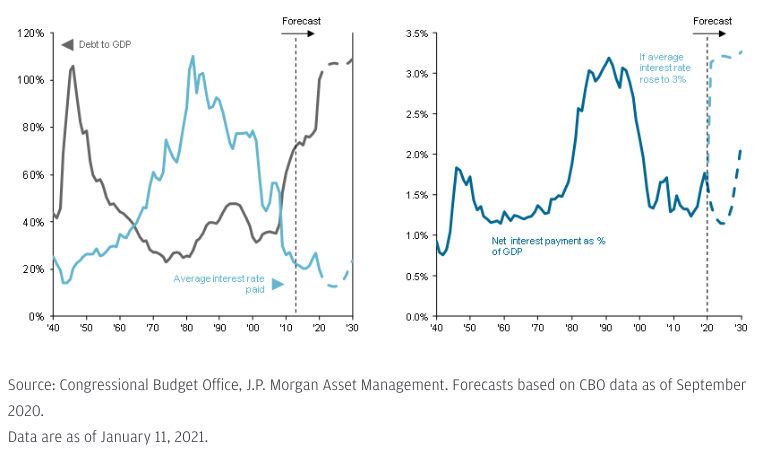 Related: The Investment Implications of a “Blue Ripple”