What Correction in Stocks? And Gold?

Stocks thoroughly rebounded yesterday, and corporate credit markets did even better. These are optimistic signs as the shape of the correction has been decided – again, as shallow, less than 5% one. Long-termTreasuries are no longer in a free fall, volalility has retreated back to the low 20s, and the put/call ratio swung back towards the bottom of its recent range.

Technology has rebounded as well, and the microrotations in the stock market keep being the haollmark of stock bull‘s health, and the risk-on (high beta) sectors and segments such as financials, semiconductors, or capex (capital expenditure such as construction and engineering) - and airlines are catching breath too.

Such was the sectoral themes likely to do well that I mentioned yesterday:

(…) That‘s the same about any high beta sector or stock such as financials – these tend to do well in rising rates environments. Regardless of any coming stabilization / retreat in long-term Treasury yields, it‘s my view that we‘re going to have to get used to rising spreads such as 2y over 10y as the long end still steepens. The markets and especially commodities aren‘t buying Fed‘s nonchalant attitude towards inflation. Stocks have felt the tremors, and will keep rising regardless, as it has been historically much higher rates that have caused serious issues (think 4% in 10y Treasuries).

In such an environment, the defensives with low volatility and good earnings are getting left behind, as it‘s the top earners in growth, and very risk-on cyclicals that do best. They would be taking the baton from each other, as (micro)rotations mark the stock market bull health – and once tech big names join again, new highs would arrive. Then, the $1.9T stimulus has made it past the House, involves nice stimulus checks, and speculation about an upcoming infrastructure bill remains.

Coupled with the avalanche of new Fed money, this is going into the real economy, not sitting on banks‘ balance sheets – and now, the banks will have more incentive to lend out. Margin debt isn‘t contracting, but global liquidity hasn‘t gone pretty much anywhere in February. Coupled with the short-term dollar moves, this is hurting emerging markets more than the U.S. - and based on the global liquidity metrics alone, the S&P 500 is oversold right now – that‘s without the stimulus package. It‘s my view that we‘re experiencing ... not a reversal of fortunes. … this remains one of the dips to be bought in my view.

All right, we‘re seeing a rebound in progress, on the way to new highs – but what about the embattled gold? Its seasonality component was „slated“ to help the bulls in Feb, and the king of metals instead succumbed to nominal yields pressure. Would the Mar historically negative slant be likewise invalidated – and again precisely for the reason called long-dated Treasuries?

Regardless of the immensely positive fundamentals behind the precious metals (including real rates, the true determinant, little changed and at -1%), it has thus far been commodities and Bitcoin who rose and held on to their gains since the 2H 2020. Please remember the big picture chart about commodities and precious metals taking turns in rising that I presented on Feb 17. The bullish case for gold (let alone silver) isn‘t lost – merely thoroughly questioned these weeks of sordid $HUI:$GOLD underperformance. 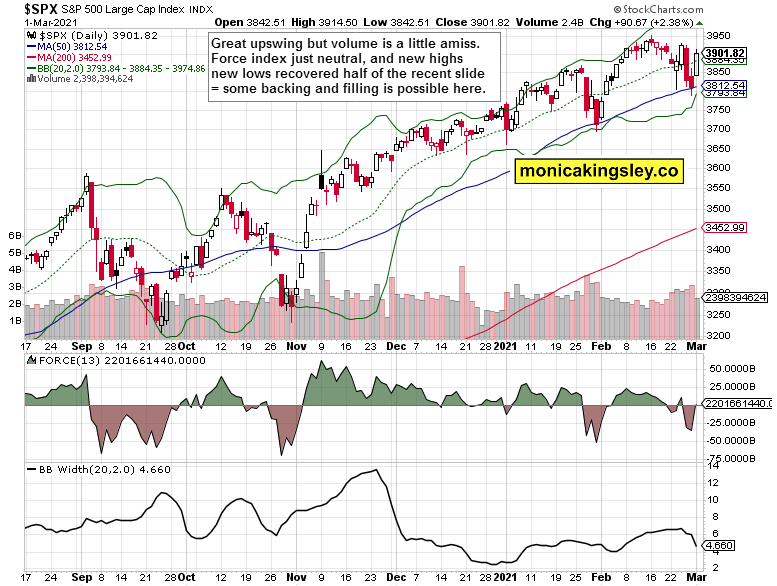 So far, so (very) good in stocks – volume is lagging but the Force index still flipped positive, indication that at worst, we‘re likely to muddle through in a sideways to higher trading pattern over the nearest days. 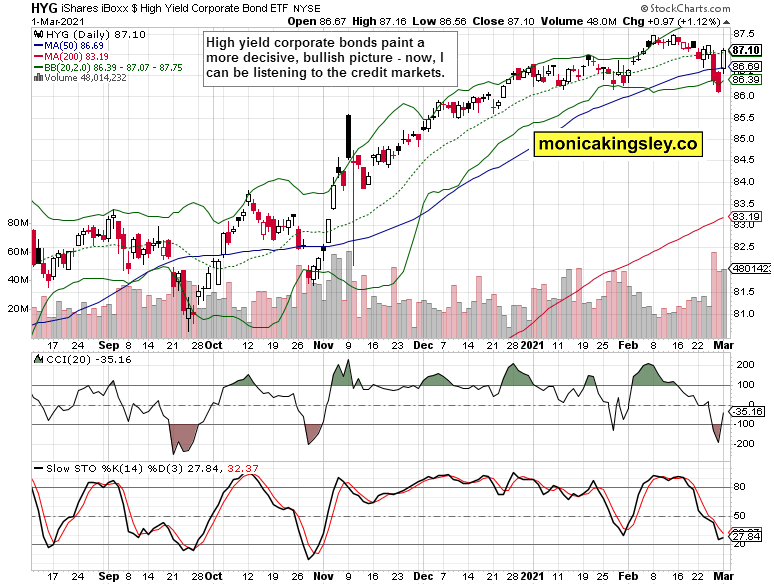 After a worrying move on Friday, high yield corporate bonds (HYG ETF) are once again assuming leadership, and I see this chart as the one with more bullish implications for the coming days than the S&P 500 alone. That‘s the dynamic I am looking for in a good run. 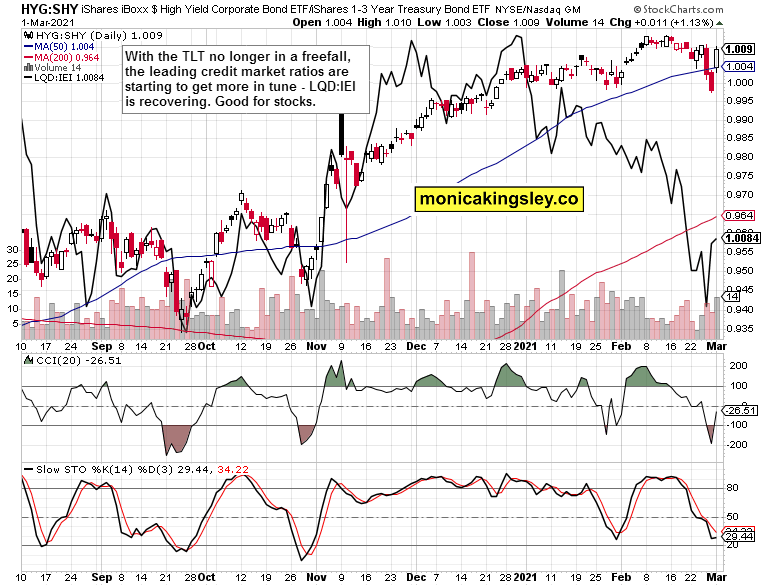 Both leading credit market ratios – high yield corporate bonds to short-dated Treasuries (HYG:SHY) and investment grade corporate bonds to longer-dated ones (LQD:IEI) – are looking to get back in closer sync than has been the case in 2021 thus far. It would take time, but would prove that the stock market can still keep on rising when faced with even higher nominal rates than we saw thus far. 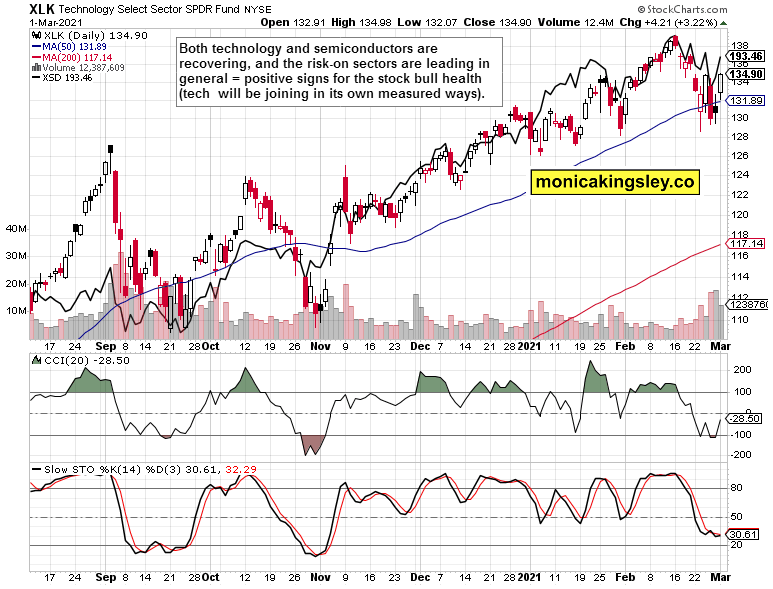 Technology (XLK ETF) clearly reversed, and while the volume isn‘t convincing on a standalone basis, coupled with semiconductors (XSD ETF) and other value stocks performance, it‘s encouraging enough to treat any significant correction calls heard elsewhere, as again plain wrong and premature, for the full picture view didn‘t support such calls in the first place, and you know what is being said about every broken clock being right twice a day…

Having said so, let‘s turn to precious metals, which offered more than a few bullish signs way earlier in Feb. Based on the evolving charts and gold‘s failure to gain credible traction, I was at least able to time most of the downside before it happened – such as last week. Still, there has been little bullish that could be said about the PMs complex, as encouraging signs emerged only to be gone shortly.

So, where do we stand at the moment?

Gold and Copper to Oil Ratio 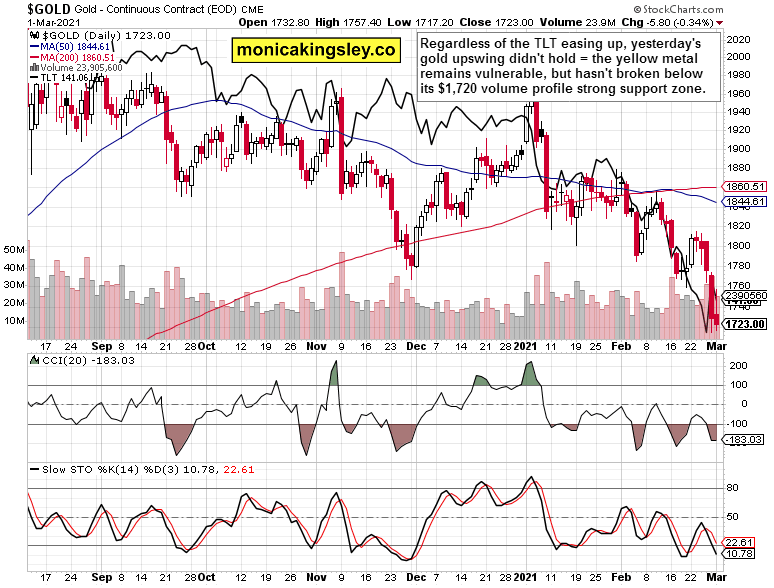 Rising TLT rates are turning a corner, but the yellow metal is staying at the strong volume profile support zone that marks the April-May consolidation zone. Earlier today, gold cut all the way to its lower end (that‘s low $1,700s) before rebounding. The danger zone hasn‘t been cleared in the least yet, but the signs of silver reversing once again from a double test of $26, is as encouraging as copper rising again, and oil not tanking. 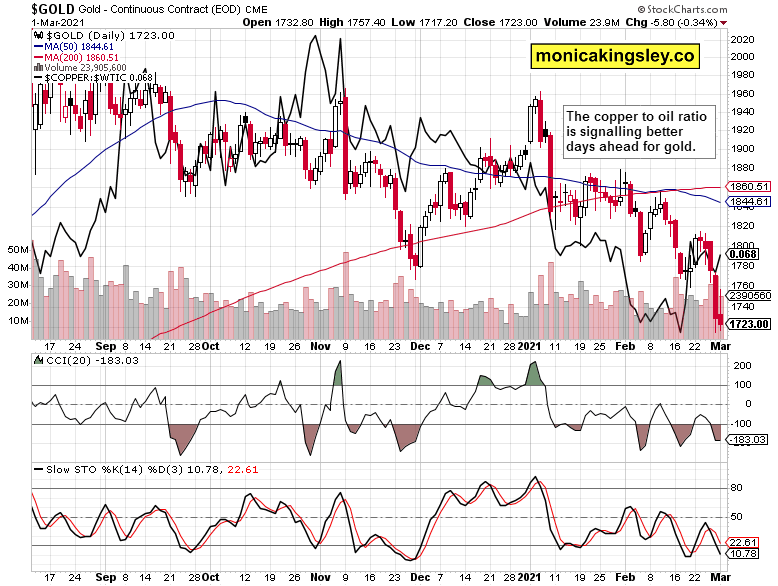 The copper to oil ratio whose long-term perspective I featured yesterday, is making a clear turn on the daily chart. Coupled with the TLT stabilization, and the dollar trading with relatively little correlation to gold these days, the table is set for a short-term rebound in the metals. How far would these take the sector?

The numerous bears would have you believe that not too far & that another downleg to ridiculously low values is at hand, but I am not convinced and prefer reading the tape instead. Yes, even in the mostly bearish PMs chart setups where nothing bullish has stuck for longer than several day over the past weeks. I repeat that the $1.9T stimulus bill (and infrastructure bill, even slavery reparations if we get that far really) hasn‘t been truly factored in by the markets – and yesterday‘s S&P 500 action proves that.

Silver keeps consolidating in a bullish pattern well above $26 still (not that it would be the line in the sand though), and when the silver miners (SIL ETF) start leading again, a new silver upleg would be born. For now, these are still mirroring the weak gold miners‘ performance, which is free from bullish signals for the yellow metal still. The gold sector isn‘t yet ready to run, plain and simple.

Stock bulls are on a solid recovery path, and new all time highs are again closer in sight. Crucially, the corporate credit markets and S&P 500 sectoral performance confirm, and once emerging markets join (the dollar weakens again), more fuel to the rally would be available.

Gold remains precariously perched, yet isn‘t breaking down – the bull run off last spring‘s consolidation remains intact – regardless of the short-term gloom and doom. I see the metals as likely to recover next as the Treasury yields stop biting. Restating the obvious, gold is far from out of the woods.

Related: Will Stocks and Gold Rebound?