The Tax Plan to Slay the Stock Bull?

A day like almost any other – S&P 500 about to take again on the ATHs until the capital gains tax hike proposal came, shaving off 50 points in stocks within an hour. The 4,415 support held though, both before and after the closing bell. Are we ready to shake off the cold water and resume running higher again?

Depends on where you look – stocks have quite some recovering still to do, and it‘s the precious metals and commodities that are performing best today. Both as an index and sectoral collection, the S&P 500 sustained broad damage, concentrated in the tech heavyweights. The volatility spike has been partially repelled but option traders seem expecting another shoe to drop, which attests to us better dampening expectations of a fast return above 4,170.

Look still though how little has changed, as if the tax raising plans haven‘t been around since the infrastructure bill or implicitly even before. It‘s still April, and markets are pricing in not only this select reality, but broader tax increases coming. Yes, they have woken up, and the reflation paradigm is getting an unwelcome companion. This hit won‘t bring down the bull, but will slow it down – and the implications for broader economy will only hasten the pronounced advent of the commodities supercycle (well underway since the corona deflationary crash last year).

As the Chinese say, may you live in interesting times, and I am glad to have caught the April 2020 turnaround reasonably well.  I‘m bringing this up just to say that this isn‘t the time to turn bearish on stocks yet – not in the least. The initial panic is over, real economy keeps recovering (amazing how fast were the reasonably good unemployment claims of yesterday forgotten, right?), inflation expectations aren‘t running progressively hotter, and Treasury yields continue retreating.

Another argument for why this is a storm in a tea cup (I‘m talking merely stock market perspective now, not the very real consequences about to hit the economy like a trainwreck in slow motion), is the Russell 2000 and emerging markets performance yesterday – reasonably bullish given the setback most keenly felt in the S&P 500 and Bitcoin.

Unless the latter recaptures $52,500 promptly and convincingly, it‘s going to remain in hot water as yet another tax cash cow on the horizon, which aligns nicely with the Yellen weekend cryptos announcement. A bit over 24hrs ago in response to a question from my great West Coast subscriber, I highlighted Bitcoin vulnerability as it has been unable to revert back above the 50-day moving average, drawing the $52,500 line in the „bulls still have a chance“ sand. Now, I would have to be convinced by the upswing‘s strength recapturing said level, which I‘m not expecting even though the asset trades quite extended relative to the lower border of its daily chart Bollinger Bands.

Thus far, precious metals, copper, oil and other commodities are holding up best – little surprising given the risk-off nature of yesterday‘s move and potentially misplaced hopes that the 28% collectibles tax on the metals would survive. These things tend to creep.

Gold or miners held up reasonably well yesterday, and I look for them to be fastest in recapturing the lost ground, followed by silver. The precious metals upleg has started, we‘re in a real assets super bull market, and this little hiccup won‘t derail it. The sad implication would actually drive it as capital formation would be hampered, unproductive behaviors encouraged, and potential output lowered.

Pretty serious consequences – add to which inflation as that‘s what the Fed ultimately wants, and the recipe for more people falling into higher tax brackets through illusory gains, is set. Then, as inflation starts firing on all cylinders – a 2022-3 story when the job market starts overheating – the pain would be felt more keenly. And this is supposed to be the environment where the dollar would be in a bull run, now and ever? Wake up:

(…) we‘re in the decade of precious metals and commodities super bull runs – and these are well underway. The debasement of fiat currencies against real assets is set to continue, and will accelerate given the unprecedented fiscal and monetary support already and ahead – sorry dollar bulls, the greenback declines are resuming – just look at the yen and yields nodding to the metals upswing. 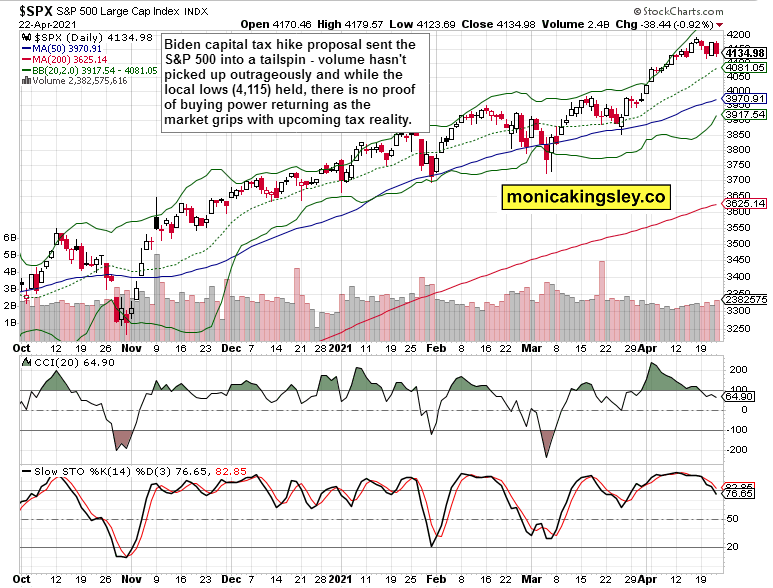 The intraday reversal is thus far lacking volume and follow through. That means it would be premature to jump to conclusions as to the shallow correction extending deeper. 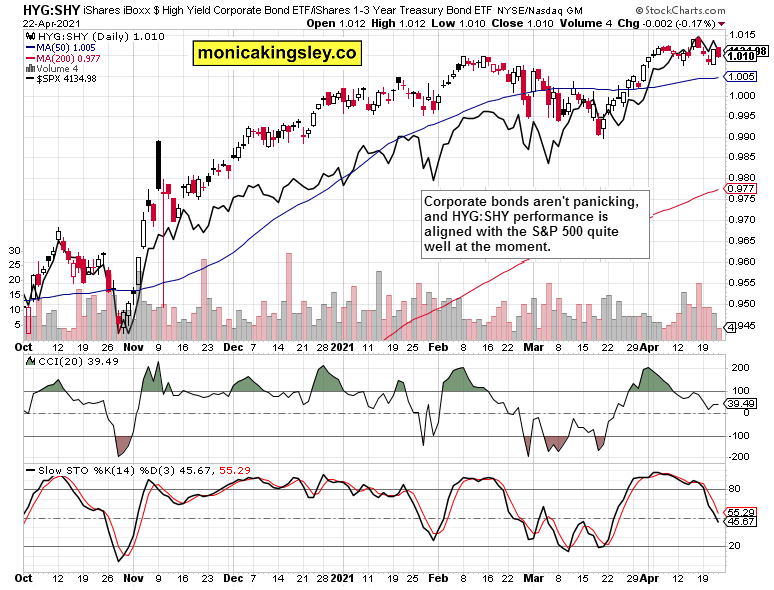 The high yield corporate bonds to short-term Treasuries (HYG:SHY) ratio isn‘t panicking either. So far, the move has been hesitant and orderly.

Value keeps being most resilient, and the tech sector stands in the middle, dragged lower by the heavyweights. I would like these to stop leading to the downside so as to declare the correction as approaching its end in terms of prices.

The inflation expectations are in a momentary limbo, but seem as likely to rise again shortly. That would be one more piece of the puzzle bringing real rates down, making the yellow metal‘s fundamental outlook more positive (as if it hadn‘t been already).

The key message is the one by the copper to 10-year Treasuries yield – a little hesitation yesterday, hinting at a little more time being necessary to overcome the $1,800 barrier next.

The S&P 500 is at a crossroads determining how low would the shock-facilitated consolidation stretch. Thus far, signs are modestly leaning in favor of the worst being in, and a gradual repair coming next.

Gold and miners took a daily dive in sympathy with stocks yesterday, but I look for the precious metals sector to recover fastest, and overcome the next resistance convincingly.

Related: Gold Unleashed: Rip Your Face Off Rally Is Here