Taper Shock That Never Was

Yes, more paring the risk-on bets came yesterday, indiscriminately taking down stocks (tech and value alike), oil and copper. The overall shape of the consolidation in real assets (commodities and precious metals) remains bullish though – it‘s mainly in the S&P 500 that the hanging man candle is giving me a pause – temporarily lower stock prices would be favored by the VIX too.

(…) Margin debt is contracting, M2 not exactly at the prior rates of growth, but celebrations in the paper and real asset markets largely go on. Gold and silver are understandably lagging in the drummed up taper expectations, but I‘m not looking for any kind of dramatic statement from the Fed. The two steps forward, one step backwards melodrama is likely to continue into the September FOMC, and even that may very well leave the markets guessing. The Fed is in no position to tighten, the economic recovery is likely to continue, and the central bank won‘t kill it – which means continuous noises, and data dependecy as they like to call it.

What we have seen thus far, and are likely to see next, are stealth real attempts to test the markets‘ tolerance to the continuing monetary largesse to the extent permitted by actual fiscal realities (nice qualifier to say „don‘t expect too much“), verbal interventions projecting the (sooner than anticipated, and most importantly, actually viable in the marketplace) taper (and later tightening) images while seeing the dollar hovering in a position of relative strength (useful tool to take on cost inflation). Make no mistake, Powell is keen to cement his legacy, and that doesn‘t involve succumbing to the hawkish (ehm, considered as hawkish in our loose monetary era) calls during a slowdown in the real economy growth.

As I wrote in the extensive daily analysis a week ago:

(…) Taking on inflation through the dollar doesn‘t come without its own risks, though – while taking down commodities a notch or two, global growth would face headwinds too. Treasury yield spreads aren‘t yet thankfully signalling more slowdown ahead – yields look ready to keep chopping, and only very gradually to start rising again. Rising greenback though isn‘t a silver bullet in extinguishing inflation given still stubborn rent prospects (it‘s one third of CPI) and wage pressures, let alone mounting supply chain issues when it comes to smooth international shipping (yes, China terminals restrictions etc). And I‘m not even raising corona anymore but look for the official start of flu season (Sep 15) to get interesting, if you know what I mean.

As you can see, there are plenty of potential headwinds, and Monday‘s slowdown in PMIs illustrates that perfectly. The Fed will continue walking a fine line, not willing to rock the (stock market namely) boat too much. They‘ve done a good job in preparing the markets for the taper, and should they decide to actually start it in Sep or Oct, it wouldn‘t make for a smooth market experience.

The risks of a policy mistake are still with us, and that‘s why I‘m not looking for overly courageous and ambitious taper path taken. Whenever taper comes, it‘s going to momentarily shock, but a keen eye would be cast so that it doesn‘t derail the status quo. 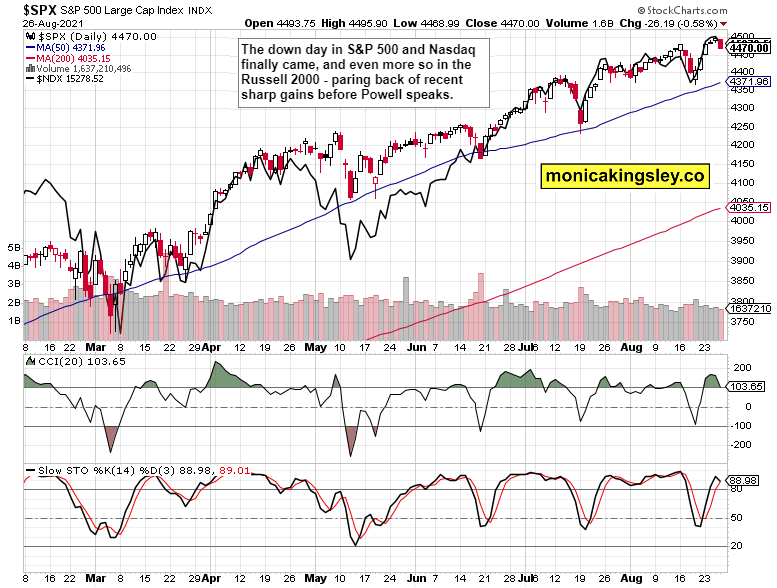 Stocks aren‘t willing to move too much, but their current position is perilous. Short-term perilous as the willingness to rebound off last week‘s lows shows.

Credit markets are sending conflicting signals, highlighting risk-on trades‘ vulnerability, but an actual downswing in these hasn‘t happened yet. A taper surprise would do the job, and close the shears wide open between HYG and the rest of the crowd.

Quite some bullish consolidations going on in gold and silver – their bullish flag approximations are ready to spring higher once the taper uncertainty gets removed to a degree. As I wrote yesterday, my bet was still on not too much downside followed by shaking off whatever little clarity is introduced by the Fed. 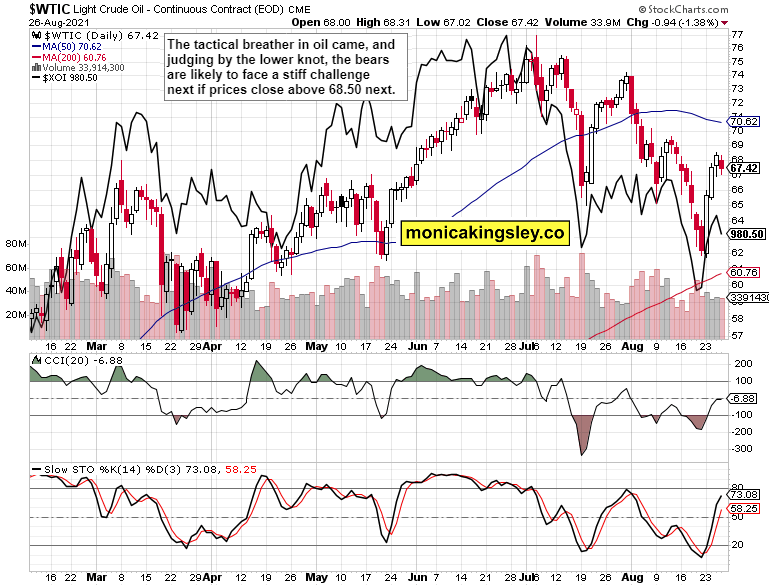 So far so good for the bulls – the brief time for a short in oil came and went. The rebound is unlikely to roll over to the downside hard and fast. 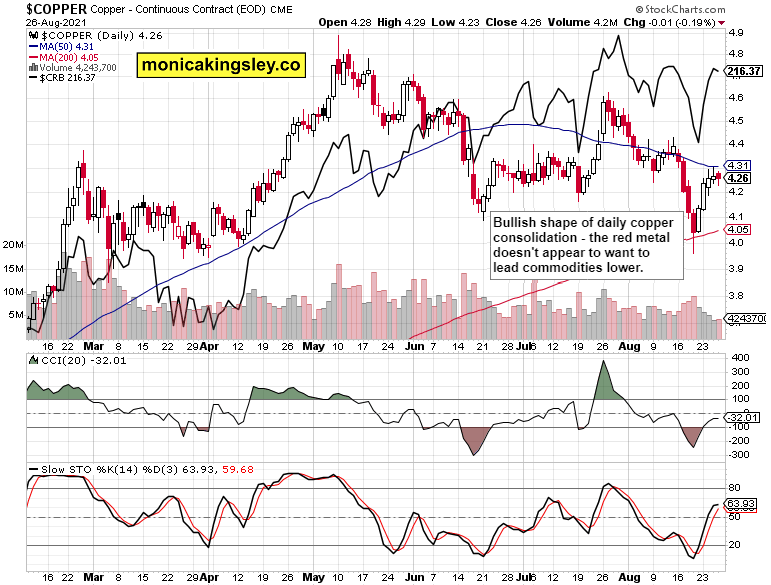 Copper consolidates even more bullishly than oil does – the 50-day moving average resistance will be challenged soon again. 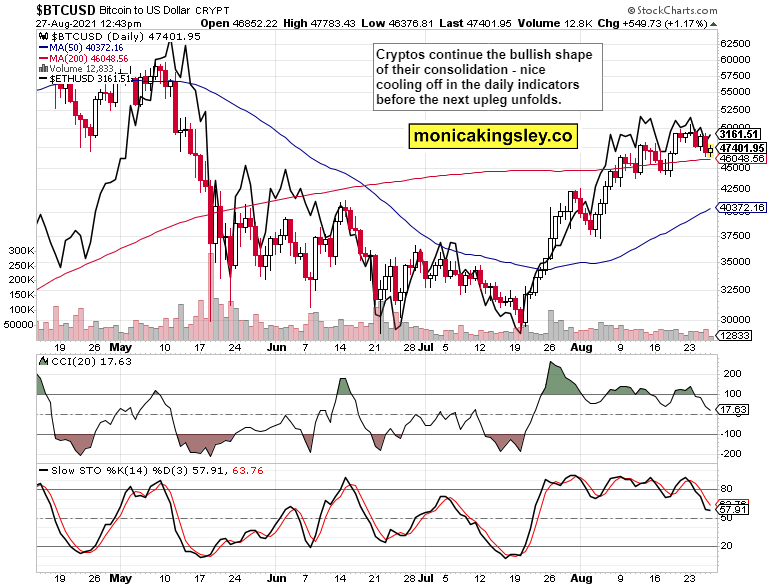 Cryptos keep on consolidating, and just as precious metals, aren‘t rolling over to the downside in the least. Fresh upleg looks approaching.

I‘m looking for the risk-on trades to continue performing well, in spite of any Jackson Hole curveballs introduced. The thinning monetary fuel air at markets‘ disposal would power different assets more selectively than was the case in first half of 2021, though.