Stocks Ripe for a Breather As Gold and Silver Remain Strong

Both the upside and downside in stocks appears limited as these keep cooling off not far away from recent highs. Yesterday‘s session sent us a telling signal that the bears might wake up from their stupor briefly. Largely though, all remains well in the S&P 500 land.

The anticipated gold rebound is underway, and the significant upper knot of yesterday‘s session isn‘t concerning – gold is not rolling over to the downside here. Let alone silver. I view yesterday‘s trading as consistent with a daily pause within an unfolding uptrend.

My open long position is growingly profitable, and I‘ve covered the bullish case in detail both on Monday and Tuesday. Today‘s analysis will strengthen the story even more.

Given the dollar performance, I can‘t underline enough the importance of what we‘re witnessing – let‘s move to my Monday‘s dollar observations, which are silently marking the turning point I called for, directly relevant to precious metals:

(…) The weak non-farm employment data certainly helped, sending the dollar bulls packing. It‘s my view that we‘re on the way to making another dollar top, after which much lower greenback values would follow. Given the currently still prevailing negative correlation between the fiat currency and its shiny nemesis, that would also take the short-term pressure of the monetary metal(s).

Finally, I‘ll bring you uranimum market analysis today as well. By popular demand, I‘ll dive into the commodity and its miners. You know already that my focus goes much further than the key topic of these analyses (stocks and precious metals). I am regularly covering oil, commodities and currencies too – just check out my trading story if you hadn‘t done so already.

So, let‘s dive into the charts (all courtesy of www.stockcharts.com). 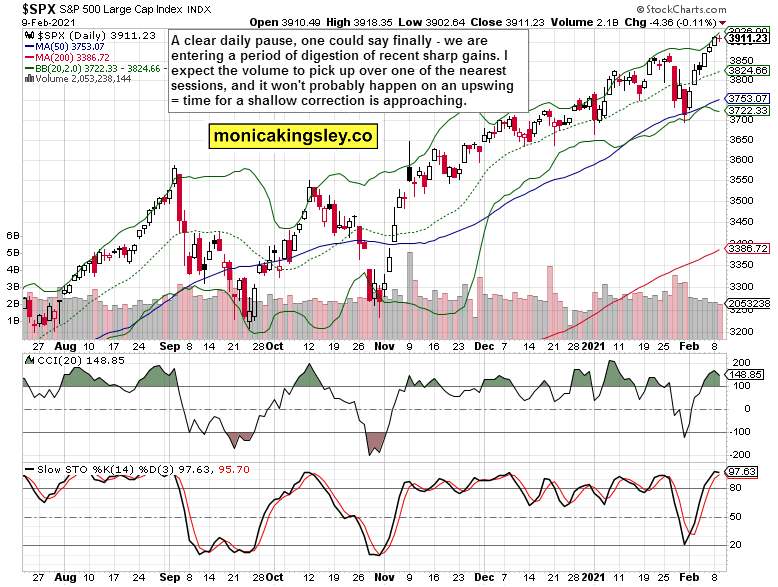 A first day of hesitation into a very strong chart with non-stop gains recently, yet it‘s exactly these moments when the bears might try to raise their heads once again. Just to rock the boat, that‘s all. 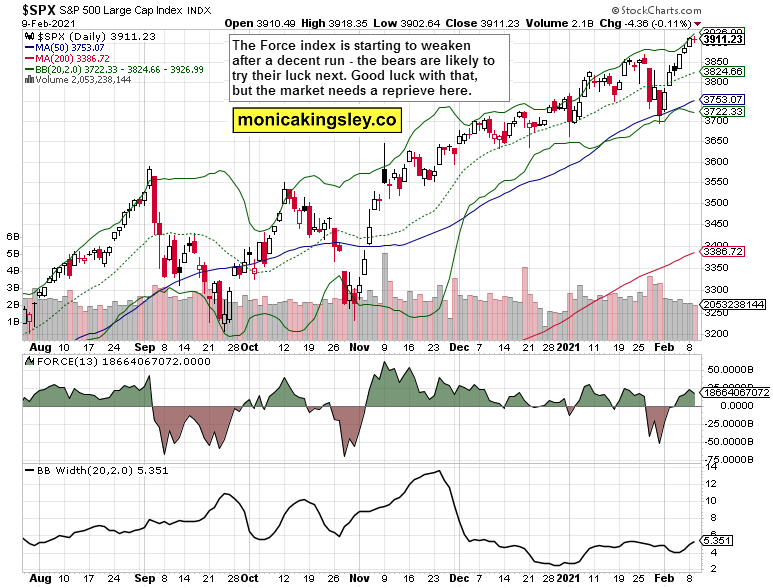 The Force index is warning that its solid upswing is due a reprieve here in what I perceive to be initial signs of selling into strength. Not too much, but distribution had an upper hand yesterday over accumulation. 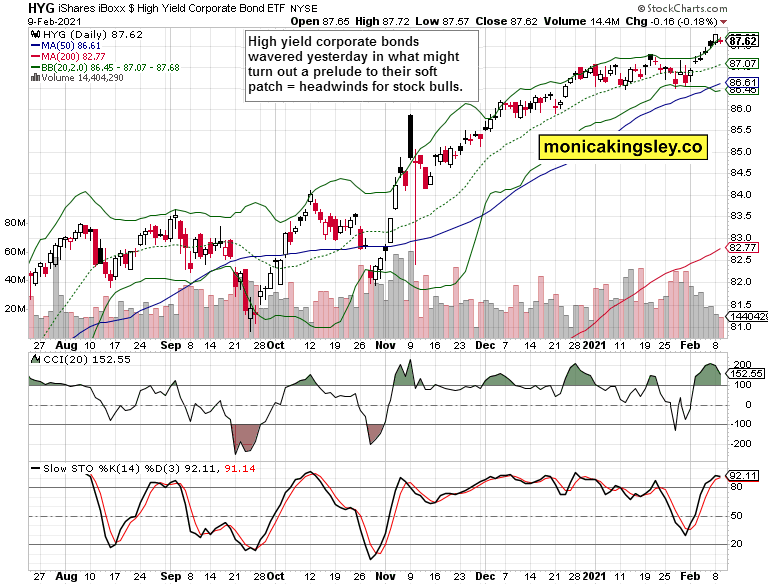 High yield corporate bonds (HYG ETF) didn‘t perform fine yesterday at all. On declining volume, the bulls couldn‘t close above Monday‘s opening prices, which given the post Jan 20 performance doesn‘t bode well for the short term. The steep uptrend simply appears in need of a rest. 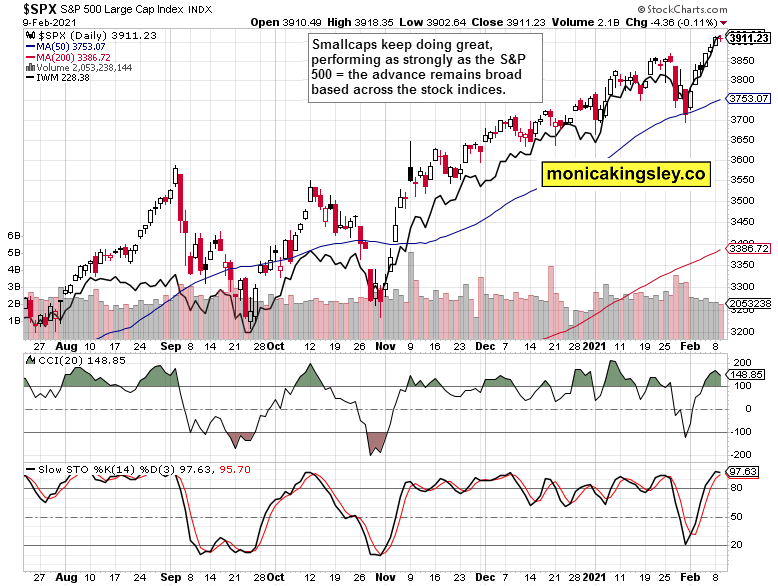 S&P 500 vs. the overlaid Russell 2000 (black line) isn‘t sending any warning signs of internal weakness when the two are compared. The rising tide is lifting all (stock) boats. 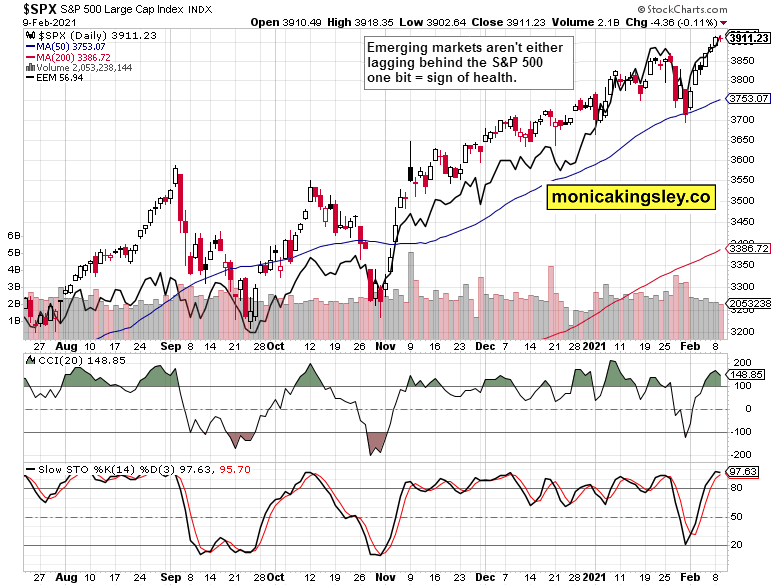 Neither the emerging markets (black line) are diverging – the many stock bull markets around the world, they are all doing fine. 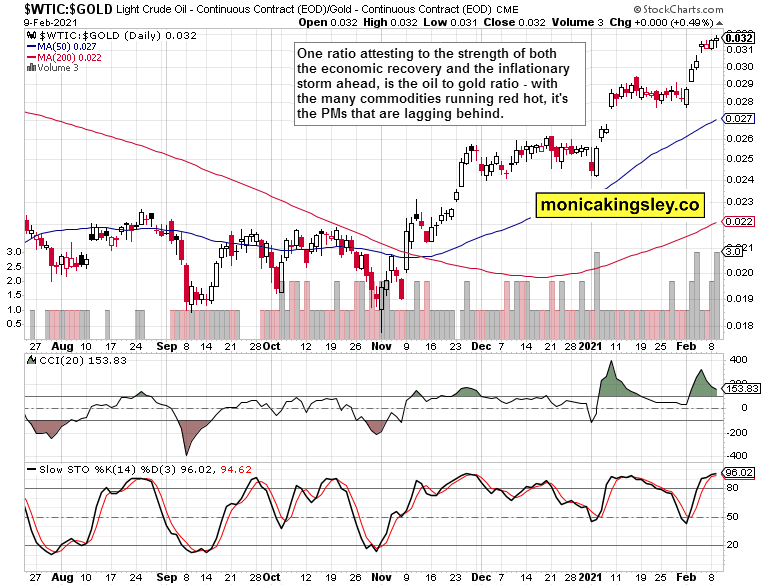 The oil to gold ratio keeps leaning in favor of oil, just as it‘s expected during an economic recovery, coupled with inflation that‘s lighting fire across commodities. The stock bull isn‘t going down really. 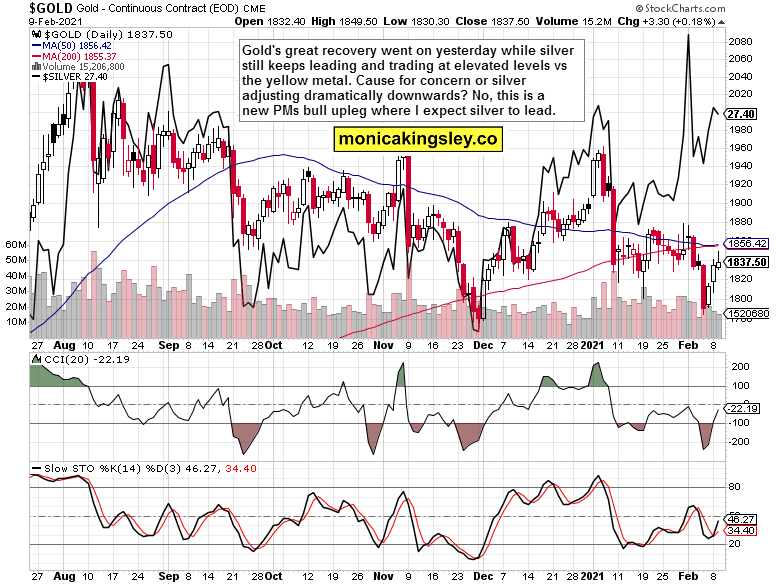 Let‘s overlay the gold chart with silver (black line). My yesterday‘s words are a good fit also today – the disconnect since the Nov low should be pretty obvious, and interpreted the silver bullish way I‘ve been hammering for weeks already. Please also note that the white metal has been outperforming well before any silver squeeze caught everyone‘s attention. 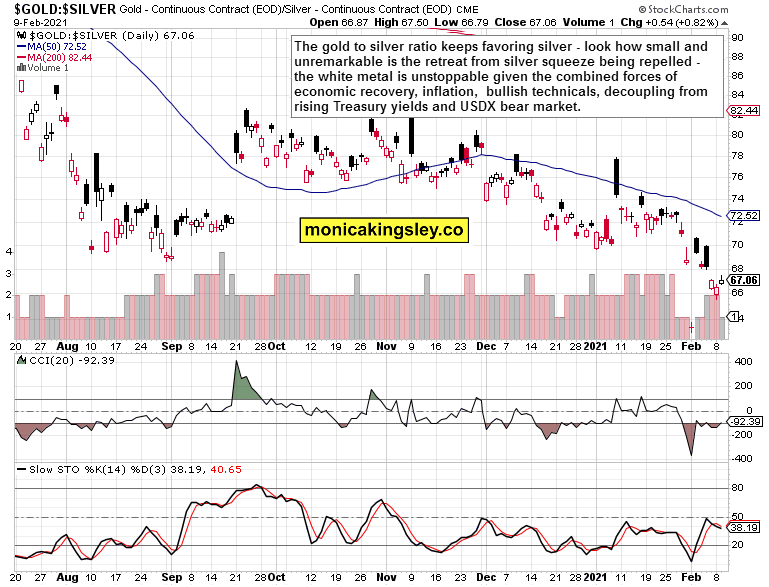 The gold to silver ratio sends a similarly clear message – the coming precious metals upleg will be characterized by silver outperforming gold for a variety of reasons beyond the industrial demand and versatility ones. Silver‘s above ground stockpile isn‘t being added to at the same pace as gold‘s is, and its recycling is less feasible practically speaking. Solar panels are but one of the ever hungry industrial applications, making heavy demands on silver reserves.

From the Readers‘ Mailbag - Uranium

Q: Hi Monica, despite all the dire warnings of $1500 on gold, you seem to be spot on so far.  Where do you think uranium might be headed.  It looks risky but some say nowhere but up others nowhere but down!

A: Thank you very much! That‘s honest analysis, free from fearmongering. I have been very vocal in writing here, on Twitter, and within comments everywhere that hypothetical technical targets divorced from reality (nonsensical) are dangerous to those who take them without a pinch of salt or two.

Whenever I turn from a precious metals (or stock market) bull to a more cautious tone, you all my dear readers, will be the first ones to know. Just as now, the technical signs supporting the bullish (PMs) case are appearing increasingly forcefully (hello, dollar), the same way I‘ll present to you the weakening bullish factors whenever their time comes. We are far away from that in both markets, and in oil too (you‘ll hear me cover that one more often as well).

Uranium was hit pretty hard with the Fukushima disaster of 2011 that brought about a long bear market. In 2016, a bottom was reached, and the commodity is slowly but surely on the mend. No spectacular gains, but modest positive returns that not even coronavirus managed to bring down.

The same though couldn‘t be said about uranium miners as the below chart shows. Having taken a plunge, they‘ve recovered with the veracity of Bitcoin (called right in my first 2021 analysis), outperforming uranium as a commodity greatly. Still, these remain considerably below their 2011 highs (over $105), and given the energy mix and policies, I am clearly on the bullish side of the uranium opinion spectrum. 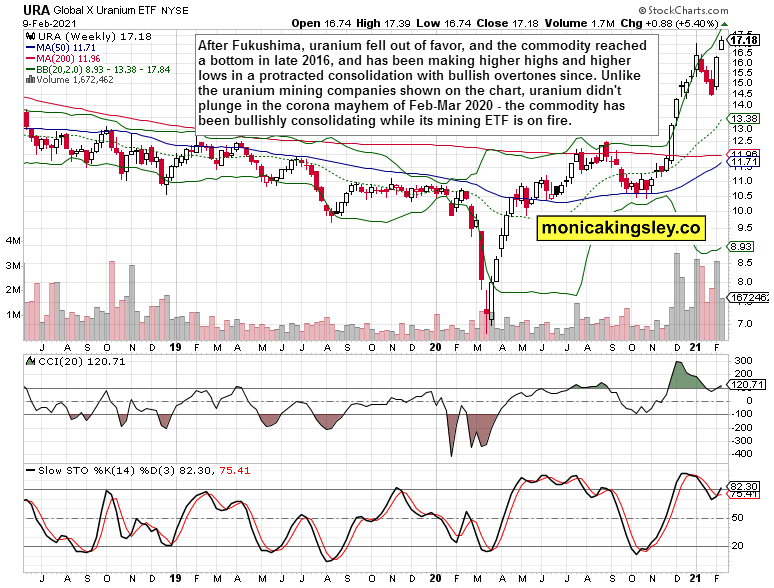 The stock market keeps holding gained ground, but regardless of the rather clear skies ahead, a bit of short-term caution is called for given the weakening credit markets, which may prove to be very temporary indeed. Expect any correction to be relatively shallow – and new highs to follow, for we‘re far away from a top.

The gold and silver bulls are consolidating gains amid their return, and the bullish case for precious metals is growing stronger day by day. Crucially, it‘s not about the dollar here, but about the sectoral internals, and decoupling from rising Treasury yields. The new upleg is knocking on the door, and patience will be rewarded with stellar gains.