Digital and renewable energy infrastructure represent a new wave of structures and systems needed to facilitate an economic future that will become increasingly digital in nature and also more sustainable.

Infrastructure investing is most associated with assets like roads, bridges, airports and pipelines that have long been the global economy’s connective tissue, but opportunities to invest in global “infra” stocks go well beyond the need to build more of these mainstays or replace them. Equally important to infrastructure’s potential as a strategic long-term holding are the cell towers, data centres and wind farms that represent a new wave of structures and systems needed to facilitate an economic future that will be become increasingly digital in nature and also more sustainable. 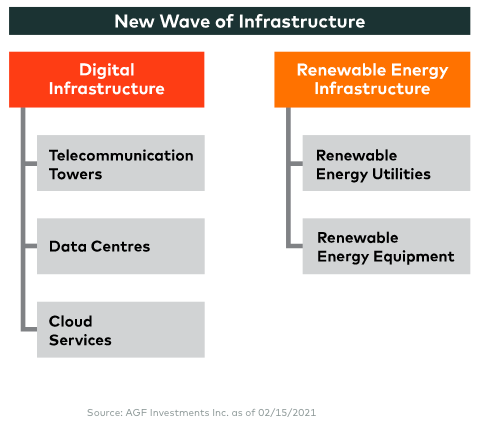 This new wave can be grouped into two broad investment categories, each of which can be broken down into sub-categories.

Telecommunication towers: The business of building and maintaining telecom towers and renting them out to the world’s largest telecom providers may not be fully appreciated by investors, but this type of B2B relationship is now commonplace in most of North America and Europe and has spawned several real estate investment trusts (REITs) with billions of dollars in revenue and market capitalizations to match. China Tower Corp Ltd, for example, is expected to generate CNY$87 billion this year and CNY$93-billion in 2022, while American Tower Corp. based in the U.S. boasts a market cap of more than US$100 billion as of the end of January1.

Data centres: A growing number of REITs and companies like Equinix Inc. CoreSite Realty Corp. and GDS Holdings Ltd. are focused on owning or leasing real estate space for use as data centres. Typically, these agreements include additional revenue-generating services such as power supply and cooling systems, and encompass a diverse range of customers from telecom, media and internet service providers to government and various other private enterprise.

Cloud services: One of the biggest operational trends in recent years has been the shift by many companies away from “on-premise servers” towards database hosting and cloud computing services sold and maintained by tech giants such as Microsoft Corp. and Amazon.com Inc. Both of these companies and many of their competitors have experienced a marked increase in the total revenues generated from these services as a percentage of their overall sales.

Renewable Energy Utilities: Several companies selling power to consumers and businesses now do so by shunning traditional fossils fuels like oil and coal in favour of multi-source renewable energy platforms that include hydroelectric, wind and solar facilities. But this trend may only be getting started. Brookfield Renewable Partners LP, in fact, says it has the capacity to invest as much as US$1 billion per year through 2025 to expand its renewables portfolio.

Renewable Energy Equipment: The demand for makers of solar panels, wind turbines, hydrogen cells and other equipment components that are used to harness the power of renewable energy sources has increased dramatically in recent years. For instance, according to the most recent statistics from Global Wind Energy Council, 60.4 gigawatts of wind energy capacity were installed globally in 2019, representing a 19% increase from installations in 2018. Meanwhile, Canadian Solar Inc., one of the world’s largest solar technology companies, has now delivered to over 49 gigawatts of solar photovoltaic modules to its customers.

Whether it’s a more traditional asset like an airport or one more nascent like a cell tower, it is widely understood that infrastructure investments are bound by certain criteria that help define it as a theme. For instance, most “infra” stocks tend to generate a stable cash flow that is derived from some essential product or service with a social benefit. In addition, they often involve the use of capital-intensive real assets and are considered high barrier to entry businesses that have minimal competition.

However, beyond these common traits, each of the categories making up the infrastructure universe comes with its own set of unique opportunities and risks which will help determine their future value. This is especially true for both digital and renewable energy infra stocks that in many cases have outperformed their peers in recent years.

For example, data centre and cell tower REITs have returned more than double that of the S&P 500 REIT Index since September of 2015. 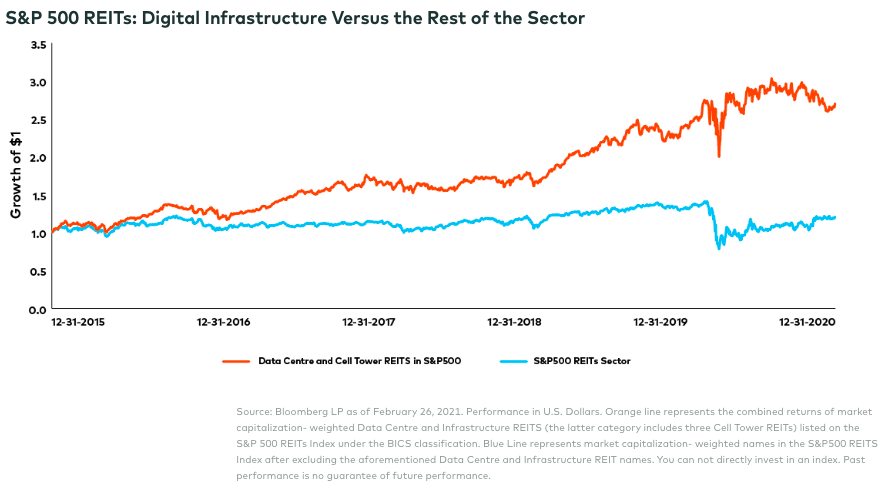 Renewable energy utility stocks, meanwhile, have climbed greater than 50% higher than broader index of utilities since September of 2017. 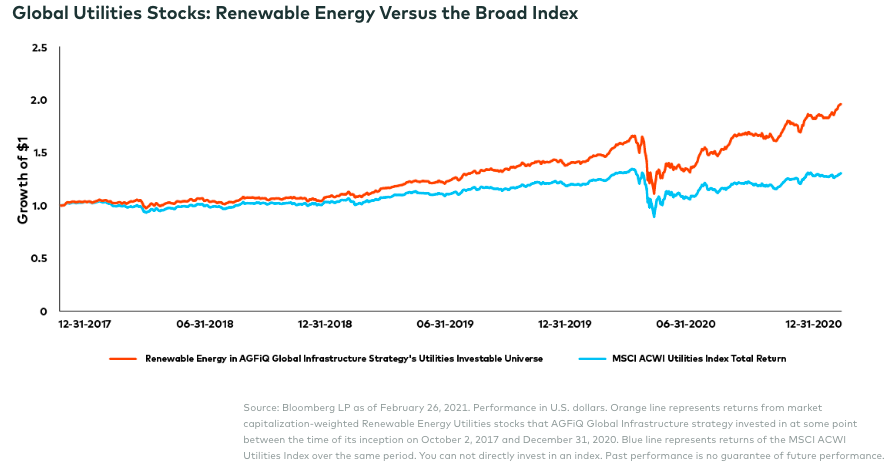 In large part, the performance across both these two categories has improved as the underlying trends in support of them have also accelerated.

For example, digital infrastructure is a direct beneficiary of the ongoing rollout of fifth generation (5G) cellular networks that are critical to bringing new technology such as the Internet of Things and autonomous vehicles to market. At the same time, the global pandemic’s impact on digital infra stocks can not be understated. In particular, shelter-in-place regulations have led to a significant increase in the use of online services and, perhaps, forever changed the way people work and socialize with each other. Similarly, the performance of renewable energy infrastructure stocks has largely been tied to growing public awareness about climate change and widespread political commitments such as the Paris Climate Agreement to limit global warming to at least 2 degrees Celsius by 2050 through the reduction of greenhouse gas emissions. In turn, renewables are expected to surpass coal as the largest source of electricity generation in the world by 2025, according to the International Energy Agency.

Still, the new wave in infrastructure isn’t without its challenges. For one, many of the businesses are private or publicly-listed in regional markets (i.e. Chinese A-shares) that are not easily accessible to global investors. Moreover, liquidity is often lacking even for more accessible listings.

As for renewable energy infrastructure stocks more specifically, the lower price of some non-renewables remains an obstacle to higher adoption, but government incentives that support the former and stricter regulations that penalize use of the latter are helping offset that risk. While coal is relatively inexpensive compared to solar, for example, it’s standing as a vital energy source has been significantly diminished in recent years as countries around the world increasingly set their low- or zero-net carbon emission goals.

The AGFiQ Global Infrastructure strategy utilizes a proprietary, multi-factor, quantitative investment process and seeks to provide long-term capital appreciation with reduced volatility and a high level of income over a full market cycle. It is actively managed to find opportunities beyond those which are generally defined by its underlying benchmark. Since the strategy’s inception in February of 2018, it has increased exposure to both digital and renewable energy infrastructure stocks and is overweight these areas in relation the rest of the holdings. This strategic action reflects our view that exposure to the new wave of “infra” stocks will provide long-term value for our clients. 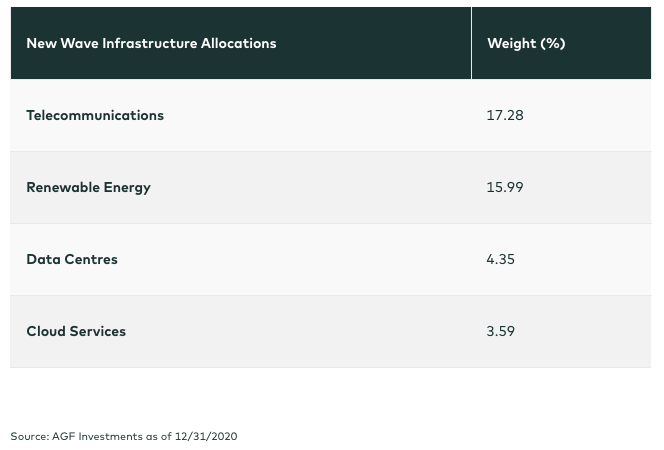 ¹ All company specific data is gathered from publicly available disclosures from the individual company directly as of March 1, 2021.

AGF ETFs are ETFs offered by AGF Investments Inc. ETFs are listed and traded on organized Canadian exchanges and may only be bought and sold through licensed dealers.

Commissions, management fees and expenses all may be associated with investing in AGF ETFs. Exchange-traded funds are not guaranteed, their values change frequently and past performance may not be repeated. Tax, investment, and all other decisions should be made, as appropriate, only with guidance from a qualified professional. There is no guarantee that AGF ETFs will achieve their stated objectives and there is risk involved in investing in the ETFs. Before investing you should read the prospectus or relevant ETF Facts and carefully consider, among other things, each ETF’s investment objectives, risks, charges, and expenses. A copy of the prospectus and ETF Facts is available on AGF.com.

The commentaries contained herein are provided as a general source of information based on information available as of February 26, 2021 and should not be considered as investment advice or an offer or solicitations to buy and/or sell securities. Every effort has been made to ensure accuracy in these commentaries at the time of publication however, accuracy cannot be guaranteed. Market conditions may change and the Portfolio Manager accepts no responsibility for individual investment decisions arising from the use or reliance on the information contained herein. Investors are expected to obtain professional investment advice. References to specific securities are presented to illustrate the application of our investment philosophy only and are not to be considered recommendations by AGF Investments. The specific securities identified and described in this commentary do not represent all of the securities purchased, sold or recommended for the portfolio, and it should not be assumed that investments in the securities identified were or will be profitable.

AGFA is a registered advisor in the U.S. AGFI is registered as a portfolio manager across Canadian securities commissions. AGFIA is regulated by the Central Bank of Ireland and registered with the Australian Securities & Investments Commission. The subsidiaries that form AGF Investments manage a variety of mandates comprised of equity, fixed income and balanced assets.