Mild Recession Likely To Be Worse Than Expected

“Pento said he’s reluctant to shed talent right away and may look to pick up bankers let go by other firms as inflation feeds talk of layoffs and recession on Wall Street.

Acknowledging that there could be a roughly 50% chance of a ‘mild recession’ ahead, Pinto said Tuesday he’s not expecting the investment banking business to come anywhere near the blockbuster results of 2021.”

“The eurozone and UK are now expected to enter recession later this year and the US will suffer a mild recession in mid-2023.” – FItch

“We forecast that the U.S. economy will enter a mild recession in H1 2023.” – Christian Nolting, Deutsche Bank

These are only a few of the analysts’ comments of late. As the Federal Reserve continues reiterating a more aggressive monetary policy stance, analysts are finally shifting from a “slow growth” to a “mild recession” view.

The problem, however, is that analysts are almost always overly optimistic. Therefore, the risk of a recession becoming “worse than expected” is a rising probability.

Such is the case given U.S. inflationary pressures and crushingly high energy prices in the Eurozone. Given the global linkages in supply chains, consumption, and production, a deeper recession in the Eurozone will add to the domestic downturn, leading to a policy mistake.

Such was a point recently by Paul La Monica via CNN Business:

“The big problem facing the Fed: The economy still seems to be running too hot for its taste. Inflation is undoubtedly a major problem, but the job market is strong, consumers are still spending at a healthy clip, and housing prices remain high despite a substantial spike in mortgage rates.

‘This data will likely encourage the Fed to continue staying in overdrive but also increases the odds that sooner or later they will make a policy mistake by tightening financial conditions too much to fight inflation,’ said Timothy Chubb, chief investment officer at Girard, in a report.

In other words, the Fed’s rate hikes could ultimately lead to the economy cooling off more than the central bank would like.”

In other words, a “mild recession” in the U.S. could be much worse.

The problem for the Fed, and Wall Street economists and analysts, is they make assessments based on lagging economic data like employment. Yes, employment was strong last month, but as shown below, that data has a historical tendency to reverse sharply. 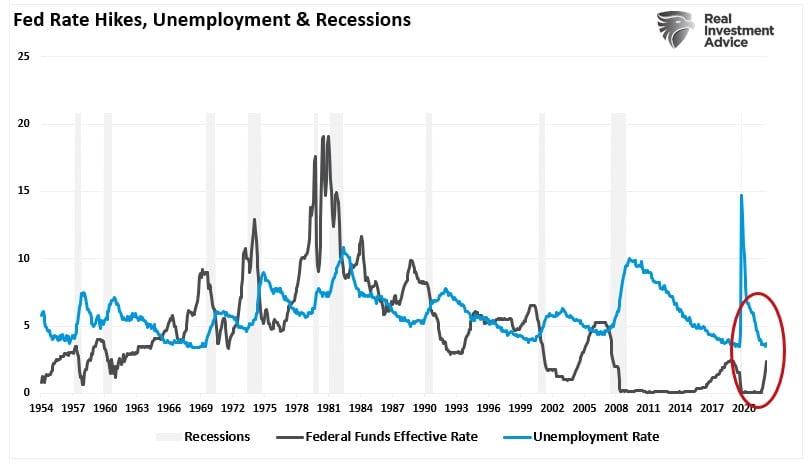 Furthermore, that type of data is also regularly subject to extensive negative revisions in the future. The other problem is that monetary policy has a 9-12 month lag effect. As noted previously:

“As the Fed continues to hike rates, each hike takes roughly 9-months to work its way through the economic system. Therefore, the rate hikes from March 2020 won’t show up in the economic data until December. Likewise, the Fed’s subsequent and more aggressive rate hikes won’t be fully reflected in the economic data until early to mid-2023. As the Fed hikes at subsequent meetings, those hikes will continue to compound their effect on a highly leveraged consumer with little savings through higher living costs.

Given the Fed manages monetary policy in the “rear view” mirror, more real-time economic data suggests the economy is rapidly moving from economic slowdown toward recession.”

The Economic Output Composite Index (EOCI) is a comprehensive measure of the overall economy. The EOCI index contains more than 100 leading and lagging economic data points covering the economy’s manufacturing and service sectors. Some data points included are the ISM surveys, Chicago PMI, CFNAI, Fed regional surveys, the NFIB survey, and the Leading Economic Index. Not surprisingly, the EOCI composite index has a very high correlation with economic growth, and readings below 30 indicate recessions. With the EOCI index currently below 32, the risk of a recession is rising. 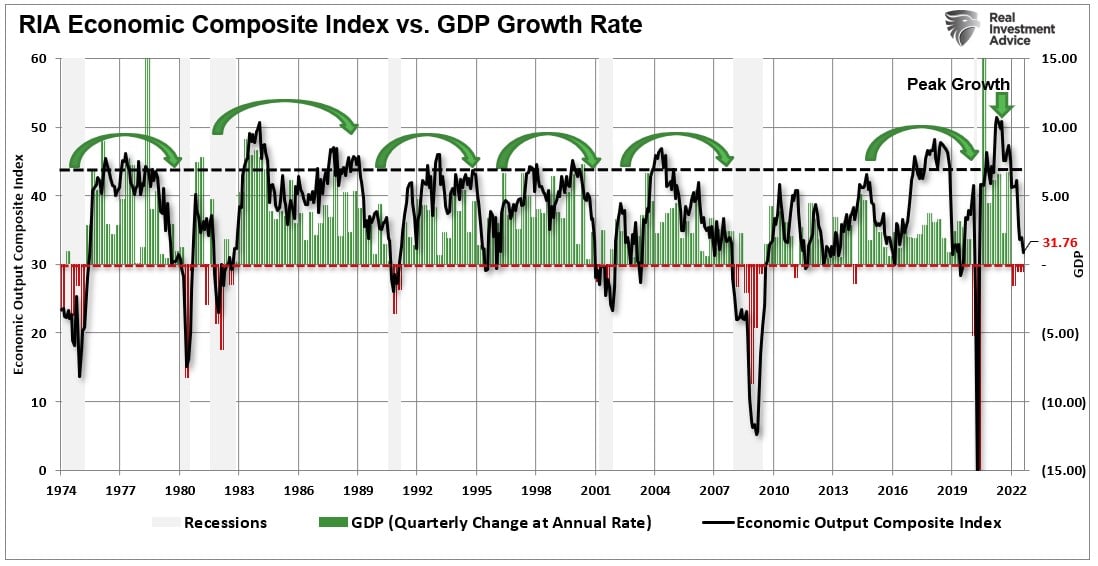 As the economic data continues to weaken, we are seeing analysts slashing earlier estimates of solid growth at the beginning of the year to slow growth in the second quarter, and now a “mild recession.” To wit:

“On its own, the higher rates path and lower growth trajectory imply higher odds of a recession, although the increase in recession risk is partially offset by an improving outlook for goods inflation and recent declines in inflation expectations that lower the chances that the Fed will hike aggressively enough to cause a recession. In addition, strong household balance sheets and an improving outlook for real income limit the odds that the economy will slip into a recession in the near-term and are part of the reason why we expect that any post-covid US recession would likely be mild. Nevertheless, on net we see somewhat higher risks of a recession following our forecast changes, and are therefore raising our odds of a recession in the next 12 months to 35%.” – Goldman Sachs

The problem with Goldman Sachs’s comments is that the average American household balance sheet is anything but strong. As we showed just recently: 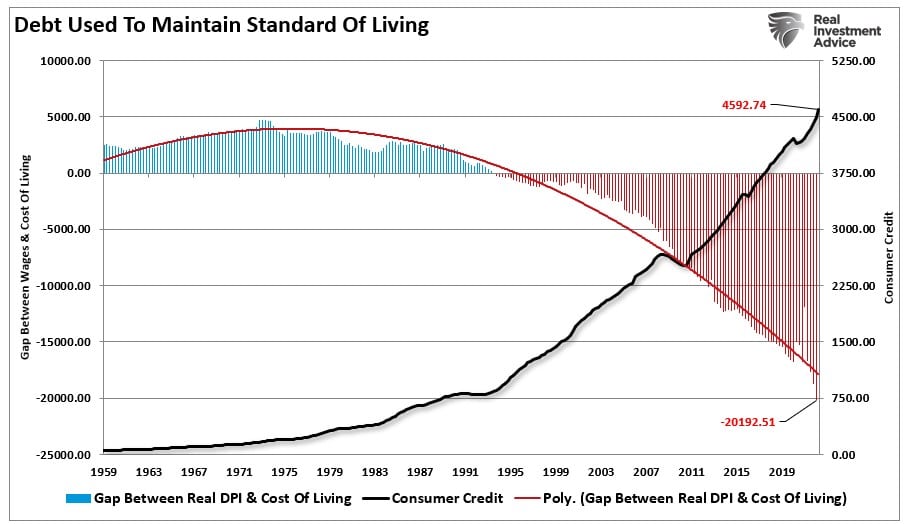 In other words, the coming recession will likely not be a “mild one.”

Why is this important from an investment view?

As discussed recently, the estimated earnings for the S&P 500 companies remain highly elevated. Such gives a false sense of security to investors looking at “forward valuations,” assuming stocks are fairly priced. In reality, most companies in the index remain overvalued despite the price decline in 2022.

“Despite the recent downward revisions, the current estimates still exceed the historical 6% exponential growth trend, which contained earnings growth since 1950, by one of the most significant deviations ever. The only two previous periods with similar deviations are the ‘Financial Crisis’ and the ‘Dot.com’ bubble.“ 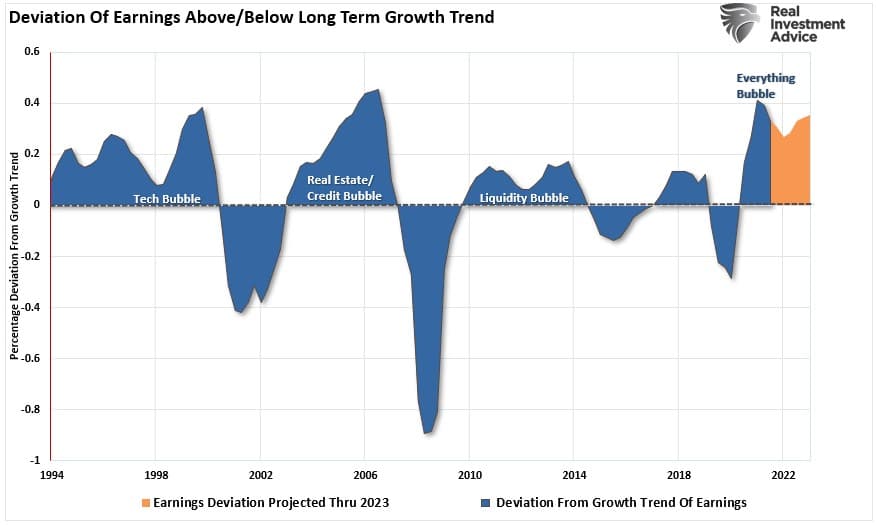 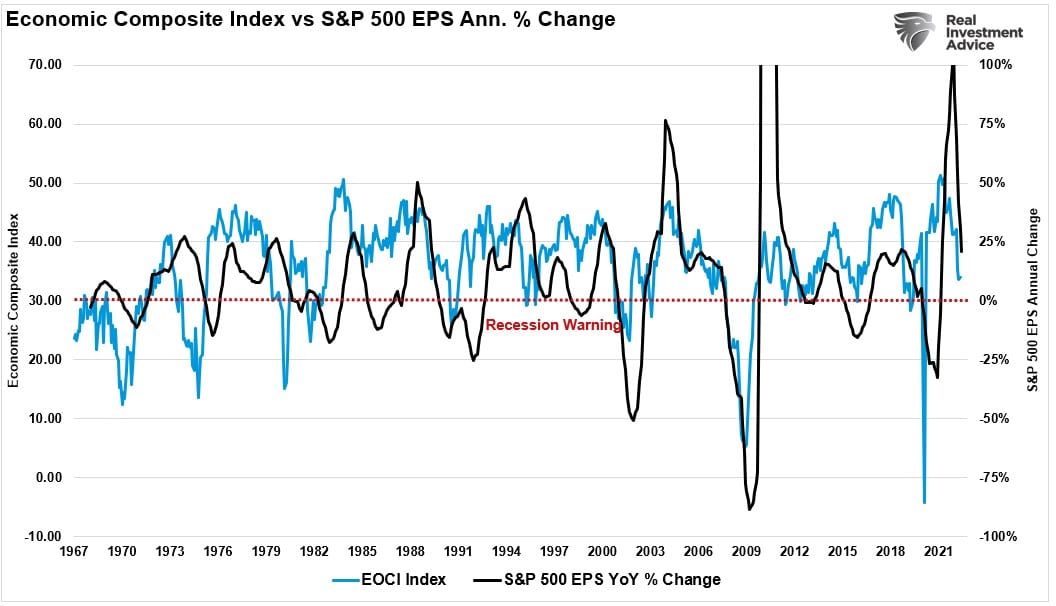 The “forward” earnings estimate annual change also suggests even a “mild recession” will push estimates substantially lower. During every previous recessionary period since the turn of the century, forward estimates declined to a negative 20% annual rate of change. 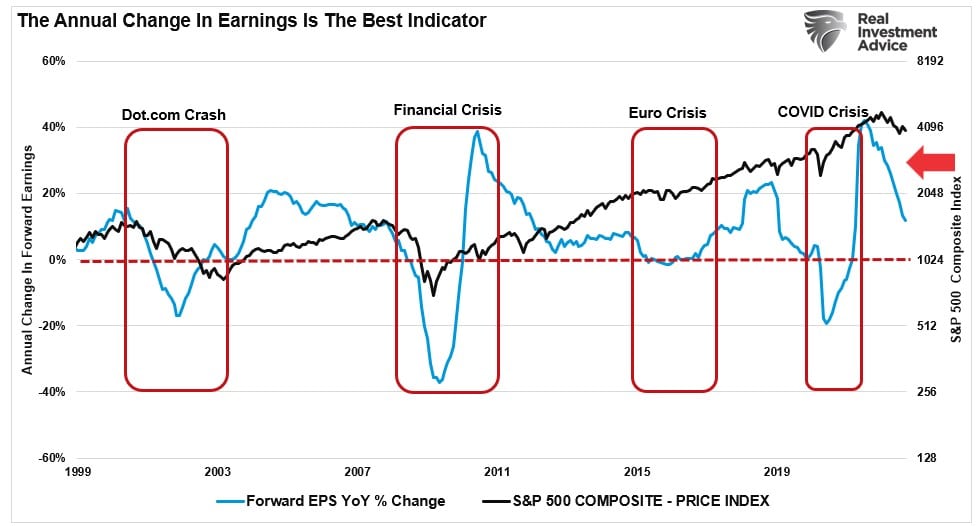 Given that the whole point of the Fed hiking rates is to slow economic growth, thereby reducing inflation, the risk of a recession remains elevated. Unfortunately, with the economy slowing, as higher interest rates and prices weigh on consumers, additional tightening could exacerbate the risk of a recession.

Therein lies the risk. Since earnings remain correlated to economic growth, earnings decline as rate hikes ensue. Such is especially the case in more aggressive campaigns. Therefore, market prices have likely not discounted earnings enough to accommodate a further decline. 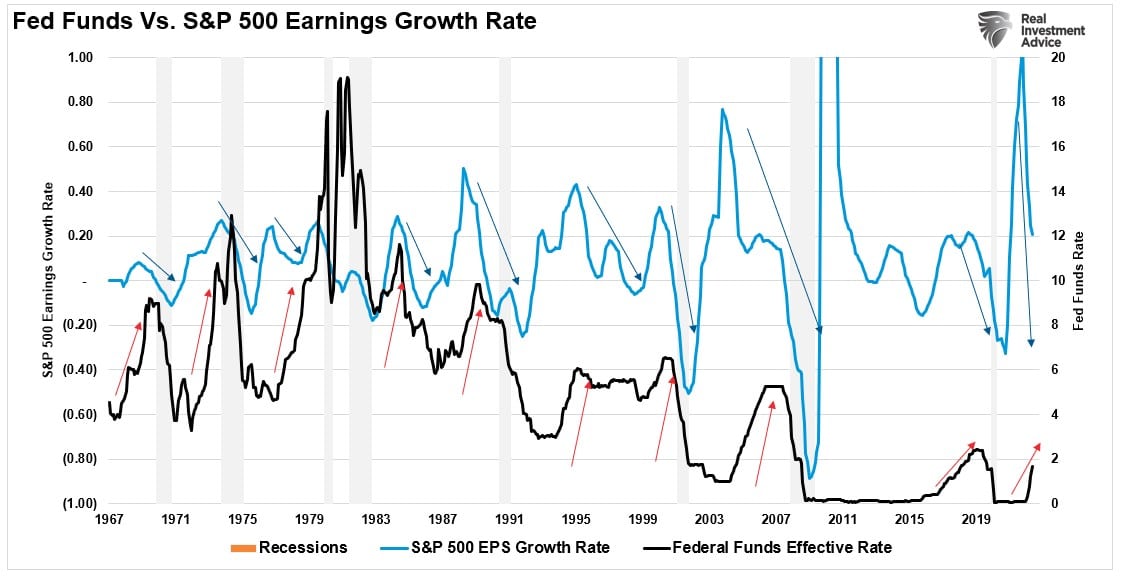 In other words, “fair value” for the market could still be substantially lower.

From our perspective, the risk of deeper recession remains elevated, particularly as the Fed aggressively hikes rates.

While there is always a possibility that the economy could avoid a “recession,” those odds are slim at best. Therefore, as investors, we should at least prepare for a storm and then cross our fingers and hope for the best. The guidelines are simplistic but ultimately effective.

If a recession occurs, the preparation will allow you to survive the impact. Protecting capital from the inherent destruction will mean less time spent getting back to even after the storm passes.

Alternatively, it is relatively straightforward to reallocate funds to equity risk if we avoid a recession or if the Fed does revert to monetary accommodation.

Investing during a recession is difficult. However, you can take some steps to ensure that increased volatility is survivable.

While the media tries to pick the next market bottom, it is better to let the market show you. You will be late, but you will have confirmation the selling is over.

If I am correct, the recession could be worse than expected, and prices will decline further.