Sea of red in stocks, reversed shortly after the open – is the worst behind? Remembering my Tuesday‘s words bringing up again downside risk (these have been growing for quite a few days before already), I don‘t think so – I consider yesterday‘s volatility as likely not to have yet peaked, and the VIX close above 21 could be overcome perhaps as early as Tuesday.

It‘s that the shift in sentiment to risk off is everywhere to be seen – surging dollar, declining yields, value doing way worse than tech, gold outperforming silver, gold holding up very well, copper and oil striving to bottom, inflation expectations approaching the lower end of its recent range, and quite a few more signs including from select currency pairs – pretty consistent with the takeaways from yesterday‘s extensive analysis. If you hadn‘t read this taper navigation game plan already, have a look, as the feedback was very positive:

(…) This is the time to be picky about where to be exposed to risks, which asset classes are likely to ride the taper and growth storms best. I think it would be copper over oil, and gold over silver. The stock market correction appears in its opening stages indeed, and cryptos still chopping around would be a great result. It‘ll take a while for the dollar to roll over to the downside, but look for it to do so over the medium to longer term, and keep an eye on Treasuries – would be great if they confirmed my midpoint economic cycle hypothesis and didn‘t spike. Finally, I expect the Fed to come to its senses as not enough of what‘s left of the free market, would step up to the plate and finance growing „building back better“ deficits. So far, so good.

Today’s report will be shorter than usual, and focus on select charts so as to drive position details of all the five publications. 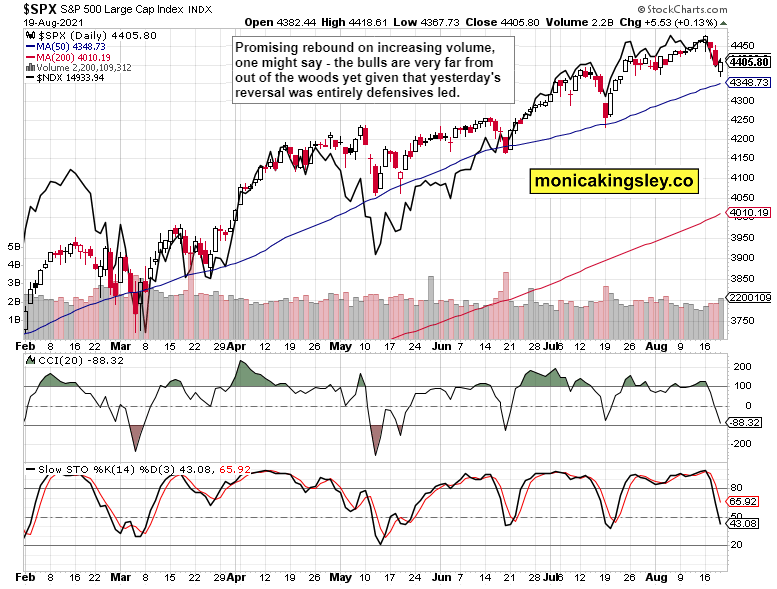 Rising volume isn‘t yet strong enough, and the rally‘s internals spell caution still. The overhead resistance above 4,425 would likely stop any advance on first encounter, and the bulls better think about convincingly defending (equals not letting price action anywhere near) 4,370s already today, and especially on Monday.

High yield corporate bonds haven‘t reversed powerfully, not nearly enough. The selling pressure isn‘t likely over even as Treasury yields are reaching for thin air again. The next two sessions will be particularly enlightening.

As said yesterday, gold resilience in the face of weakening miners, is a good sign – look for the yellow metal to lead precious metals sector higher. The parallels to early 2016 are hard to miss. Given that we‘re near Mar lows in the miners, capitulation is approaching – perhaps as soon as it becomes apparent what would come out of Jackson Hole. 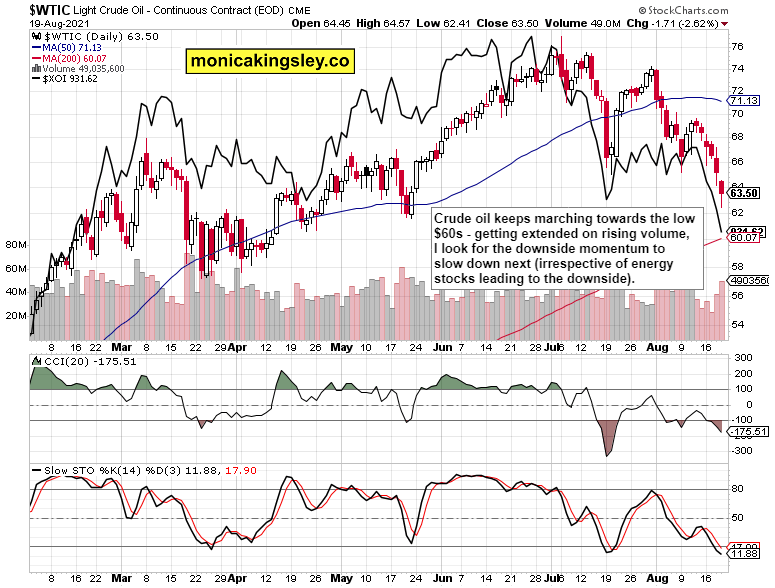 Energy stocks keep plunging, and attracted high volume yesterday, which means an oil bottom could be approaching. That‘s not yet my leading scenario as I look for price declines to slow down a little first – and it‘s an open question whether that happens above or below $60. 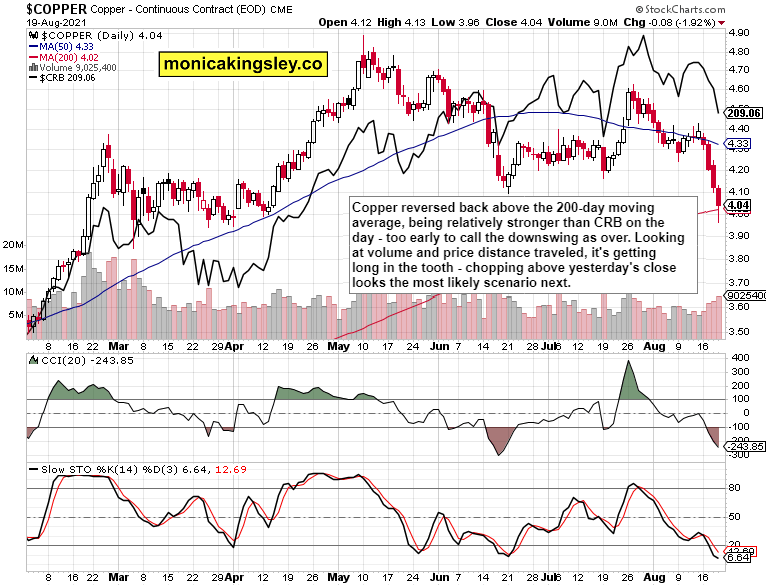 Copper erasing half of the intraday slide, is a good intial sign, but the road to flip the very short-term outlook bullish is more than a few days away still. The steadily rising volume spells accumulation, but FCX also says we aren‘t out of the woods in the red metal yet. 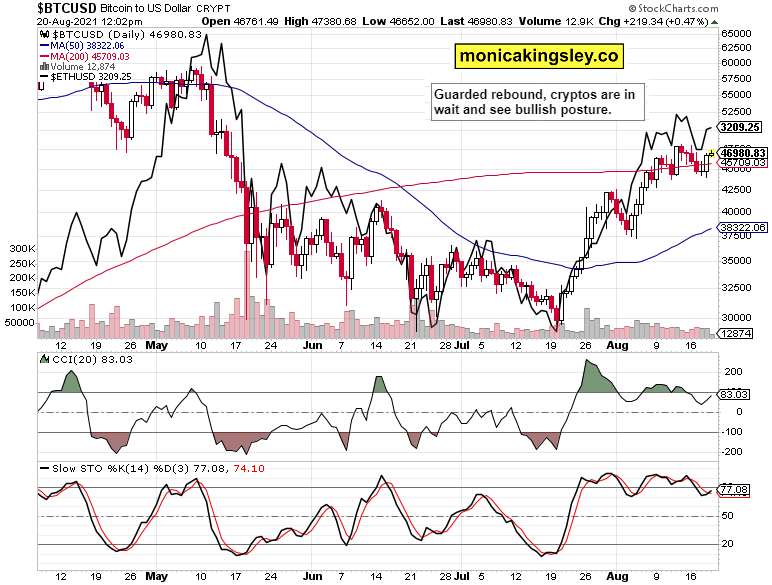 Crypto bulls replied solidly yesterday, but prices are still rangebound for now, and are likely to chop a little more before another upleg develops.

Fed taper prospects are being reassessed, and the decreasing liquidity is putting pressure on quite a few markets. With margin debt standing first in the line, the risks are skewed mostly to the downside as safe haven assets don‘t look to have topped just yet – I mean the deepest ones such as USD and Treasuries. We‘re getting there, and all it takes is for the Fed to blink.