S&P 500 fading the FOMC rally went a bit too far – credit markets aren‘t panicking, so I doubt a fresh lasting downtrend is starting here. Chop, yes – the 4,720 area is proving a tough nut to crack, but it would be overcome. If there are two arguments in favor, it‘s the financials and HYG – the likely rebound in the former, and Friday‘s resilience in the latter. Given that Thursday‘s spurt to 4,750 evaporated so fast, I‘m not looking for a stellar year end. Positive given where we‘re trading currently, sure.

Markets are now grappling with faster Fed tapering (which has opened the way to a rate hike in Q2 2022), getting slowly more afraid of fresh corona restrictions, and dealing with inflation that‘s not going anywhere. Outpacing wage growth, with real yields being deeply negative (no, 10-year Treasury yield at even 2% doesn‘t cut it – that‘s my 2022 target, by the way), the administration would be hard pressed in the year of midterms to counter the corrosive inflation effects on poll numbers. And the Fed expects to keep tightening when the real economy is already suffering from contracting liquidity as seen also in strengthening dollar?

The central bank will have a hard time taming inflation, and in my view won‘t succeed – the persistently high inflation rates are going to be with us for years to come, and outpacing wages. Corona response is another uncertainty, and given the APT performance, the odds of seeing economic activity (just at a time when supply chains would need to keep working off prior setbacks) restricted, have increased. Similar to the recent high PPI reading, this is one more argument for why inflation isn‘t receding in the short run – not when demand isn‘t likewise being destroyed. As if consumer sentiment weren‘t struggling already…

Still, equities are poised to extend gains in 2022, and I‘m looking for a volatile but positive year. 5,200 in Dec 2022 isn‘t out of the question – with large cap tech, financials and energy doing particularly fine. Real rates would remain negative, and precious metals would love the Fed slamming on the tightening breaks, and bringing back the punch bowl somewhat. If you look at the flattening yield curve, it‘s clear evidence of market fears (I call that certainty as that‘s what they excel at – the 1995 soft landing was a notable exception) of the Fed overdoing the tapering & rate hikes. Given all the inflation still ahead, and the expected fiscal-monetary policies working against each other (yes, more handouts), commodities would have another great year.

So much for the big picture 2022 predictions. 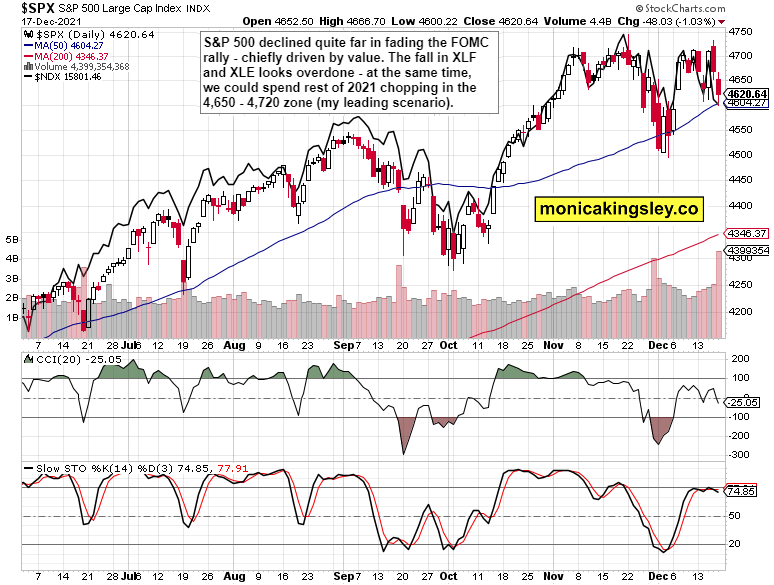 S&P 500 on the defensive, but the bullish case isn‘t lost. Some sideways trading of today‘s volatility is likely to preceed the upswing – we aren‘t rolling over to a 5-10% correction now.

HYG retreat could have been a lot worse, and it‘s a good sign bonds aren‘t panicking. Just the junk ones would need to outperform the quality ones to drive a good stock market day. For now, bonds remains on guard.

Precious metals decided to make a measured upswing – this isn‘t a real reversal. Pressure to go higher is building up, and rates rising a little before the Fed moves, won‘t cut it. When liquidity conditions and corona fears ease a little, look for a much steeper upswing. 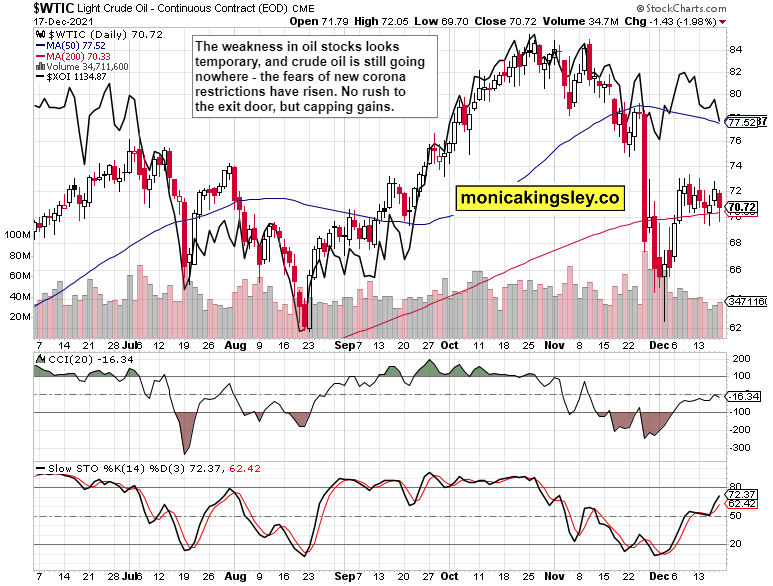 Crude oil is trapped in the omicron uncertainty – quite resilient, which is a testament to the overwhelming pressure for prices to keep rising. Waiting for some fears to be removed before the fundamentals sink in again. 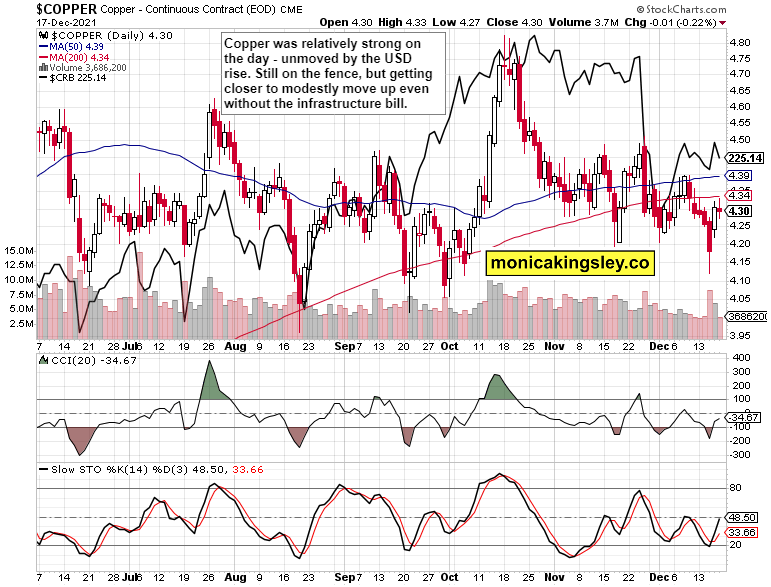 Copper is leaning to the bullish side of the spectrum – it certainly isn‘t disappointing. The low volume hints at little willingness to sell – an attempt to spike shouldn‘t be surprising next. 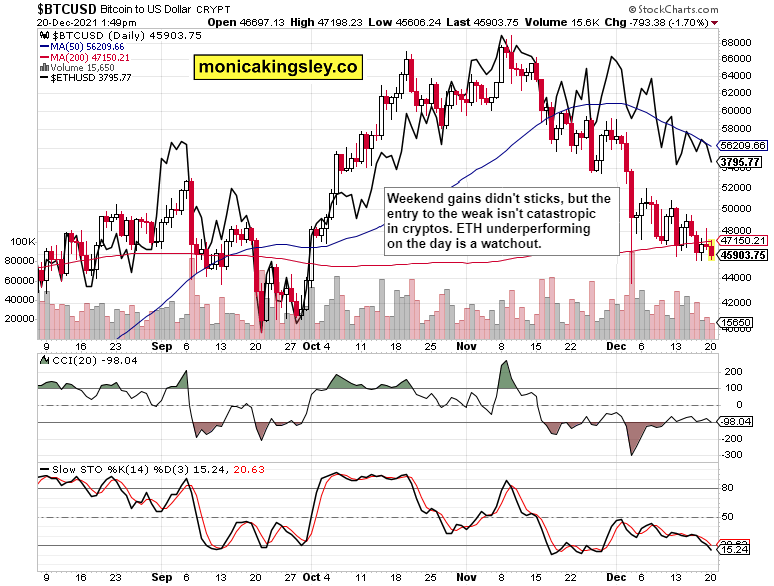 Bitcoin and Ethereum weakness today is there, mirroring commodities – but the decline isn‘t in the disastrous category. Wait and see with a whiff of preliminary caution – that‘s all.

S&P 500 and oil are feeling the omicron response pinch – the worries boosted by Netherlands lockdown Sunday. Corona remains the wildcard, and markets are ignoring its relatively mild symptoms while focusing on case count. Tech is likely to do better than most of value while yields aren‘t pressured to rise fast. For a moment, inflation is receding from the spotlight, but I‘m looking for it to come back.