Credit Market Wheels in Danger of Coming Off?

SPX backing and filling worthy of Monday‘s session – with important rotations below the surface. Namely, tech and Nasdaq underwent daily consolidation on long-dated Treasuries retreating a little. Key point though was rejection of the intraday downside, making the S&P 500 pendulum likelier to swing this week again bullish. The VIX spike was rejected while option traders didn‘t give up much of their bearish resolve, which doesn‘t spoil the bullish picture though.

Stock trading yesterday was accompanied by the bond markets moving down. Such a non-confirmation is encouraging in its implications, as the markets are still taking seriously the transitory inflation messaging in light of the less alarming nature of Thursday‘s PPI. Seems like we‘re in for a few relatively stable weeks of Treasury yields undeperforming inflation expectations before the yield climb returns:

(…) The transitory inflation story got modestly supported, but while I think that the red hot CPI inflation would die down a little (i.e. not keep rising ever as steeply as was the case with Wednesday‘s data) once the year on year base to compare it against normalizes, a permanently elevated plateau of high and rising inflation would be a reality for more than foreseeable future simply because the Fed would be as behind as Arthur Burns was in fighting the 1970s inflation, and upward price pressures in the job market pressures would kick in.

Given though the mammoth scale of money printing and fiscal injections that surely has the bond vigilantes rolling in their graves, it‘s miraculous that the bond markets aren‘t revolting more, much more. Okay, you may look at it as that the 10-year Treasury yield has more than tripled since August, but the low base (0.5% rate) is distorting the view. Plenty of room still before financial repression enters stage right even more noticeably (we are nowhere near the panic yield levels causing genuine hardship for the S&P 500), but we have time – I am looking for a reprieve in the Treasuries markets, which would help especially the tech sector recovery.

Final sign of encouragement for the S&P 500 bulls comes from the Russell 2000 and emerging markets, which had a better day than the 500-strong index. At the same time, the dollar went on to challenge its May lows, and is likely to break below them – in line with my dollar bearish calls.

Gold and silver fireworks go on, and the miners support these moves – including silver ones springing to life. Just as I stated a month ago, the unavoidable inflation data are bringing down real rates, are at work. What started as a decoupling from rising nominal yields that I talked in early Mar, continues in a more obvious day, sharply increasing my open gold profits.

Crude oil upswing is unfolding according to plan, and the lower volume isn‘t as concerning so as to invalidate it. Crucially, the oil sector ($XOI) continues pulling ahead, and remains fully supportive of making the open oil position even more profitable.

Bitcoin and Ethereum rebounded off their daily bottom yesterday, and in spite of choppy trading throughout the session, the Ethereum position was profitably closed. Bitcoin doesn‘t appear to be out of the woods yet, but the Ethereum chart is looking more constructive as time passes by. 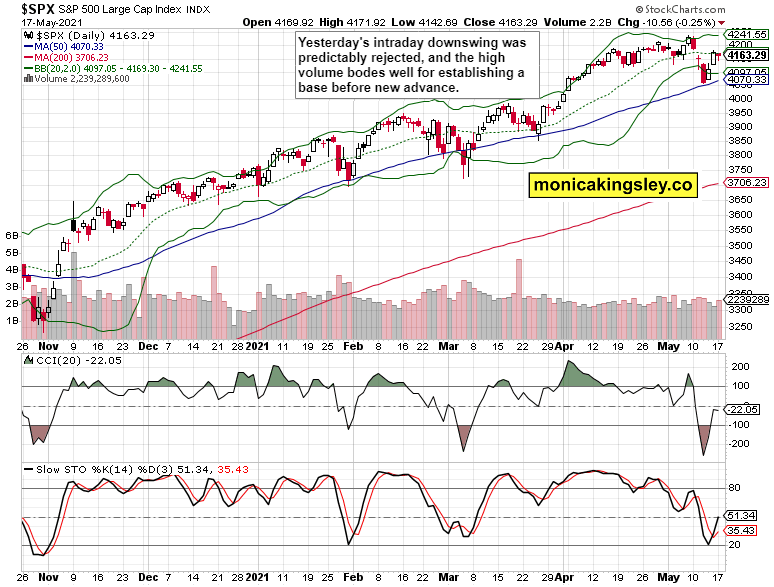 S&P 500 bullish consolidation goes on, and amid the sideways trading of the present, bulls are still the favored party.

Corporate bonds – whether high yield or investment grade ones – disagreed with the stock market daily resilience, and followed long-dated Treasuries to the downside. Such action though looks as a daily fluctuation, and isn‘t reason good enough to reevaluate the bullish outlook.

$NYFANG didn‘t participate in the daily tech setback while value mostly held gained ground. Technology is giving an impression of being ready for rebound continuation which would tie in well with the relative Treasury market calm.

Gold and miners are gaining speed, the latter especially – and that bodes well for the former, extending into silver naturally as well. Please note that this is happening against the backdrop of modestly rising nominal rates (see my earlier words about the ever more apparent decoupling).

Silver confirms and so does the copper to 10-year yield ratio. Just as I talked on May 06, precious metals are assuming the baton from commodities – catching up. 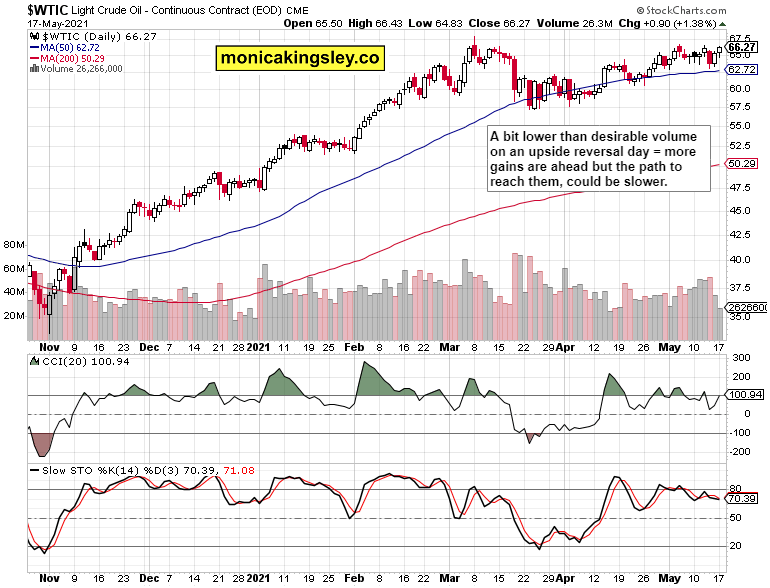 Crude oil is back in the growth mode, yet the lower daily volume advises patience, and perhaps also indicates less volatile trading the day ahead (today). Either way, I am not looking for its sharp downside reversal.

S&P 500 bulls are getting ready amid all the backing and filling for further advance, unless the corporate credit markets throw a fit. That‘s though unlikely to be of lasting importance.

Gold, silver and miners upswing goes full speed ahead, so look up as higher prices are on the immediate horizon.

Crude oil is yet another bullish bet, and its chart and oil index performance support higher prices still.

Bitcoin woes continue, and Ethereum is better placed to return to growth sooner. All doesn‘t seem calm though in the crypto land at the moment.