Why It‘s Reasonable to Be Bullish Stocks and Gold

Another day, another reversal – and a positive one for stocks. Universal sectoral weakness gave way to a unison rebound amid constructive outside markets. After weeks of on and off fits over rising Treasury yields, S&P 500 ran into headwinds on their retreat, and recaptured its luster yesterday as long-dated Treasuries (TLT ETF) rolled over to the downside. I guess nothing boosts confidence as much a troubled 7-year Treasury auction.

While it‘s far from full steam ahead, it‘s a welcome sight that the reflation trade dynamic has returned, and that technology isn‘t standing in the way. I think we‘re on the doorstep of another upswing establishing itself, which would be apparent latest Monday. Credit markets support such a conclusion, and so does the premarket turn higher in commodities – yes, I am referring also to yesterday‘s renewed uptick in inflation expectation.

Neither running out of control, nor declaring the inflation scare (as some might term it but not me, for I view the markets as transitioning to a higher inflation environment) as over, inflation isn‘t yet strong enough to break the bull run, where both stocks and commodities benefit. It isn‘t yet forcing the Fed‘s hand enough, but look for it to change – we got a slight preview in the recent emergency support withdrawal and taper entertainment talking points, however distant from today‘s situation.

Now, look for the fresh money avalanche, activist fiscal and moterary policy to hit the markets as a tidal wave. Modern monetary theorists‘ dream come true. Unlike during the Great Recession, the newly minted money isn‘t going to go towards repairing banks‘ balance sheets – it‘s going into the financial markets, lifting up asset prices, and over to the real economy. So far, it‘s only PPI that‘s showing signs of inflation in the pipeline – soon to be manifest according to the CPI methodology as well.

Any deflation scare in such an environment stands low prospects of success.

That concerns precious metals – neither rising, nor falling, regardless of the miners‘ message. After the upswing off the Mar 08 lows faltered, the bears had quite a few chances to ambush this week, yet made no progress. And the longer such inaction draws on, the more it is indicative of the opposite outcome.

Yes, that‘s true regardless of the dollar continuing down for almost a month since my early Feb call before turning higher. When I was asked recently over Twitter my opionion on the greenback, I replied that its short-term outlook is bullish now – while I think the world reserve currency would get on the defensive and reach new lows this year still, it could take more than a few weeks for it to form a local top. Once AUD/USD turns higher, that could be among its first signs.

(…) Gold is again a few bucks above its volume profile $1,720 support zone, and miners aren‘t painting a bullish picture. Resilient when faced with the commodities selloff, but weak when it comes to retreating nominal yields. The king of metals looks mixed, but the risks to the downside seem greater than those of catching a solid bid.

That doesn‘t mean a steep selloff in a short amount of time just ahead – rather continuation of choppy trading with bursts of selling here and there.

What could change my mind? Decoupling from rising TLT yields returning – in the form of gold convincingly rising when yields move down. 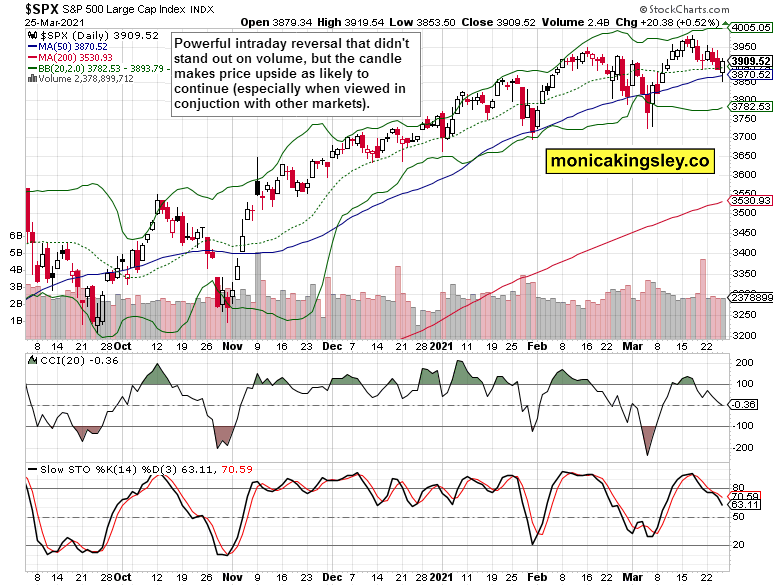 Yesterday‘s reversal was overall credible – more so in its internals than as regards the daily volume. On a positive and contrarian note, the put to call ratio reached higher highs yesterday, leaving ample room to power a swift upswing should it come to that. And it could as quite many investors are positioned for a downswing in stocks. 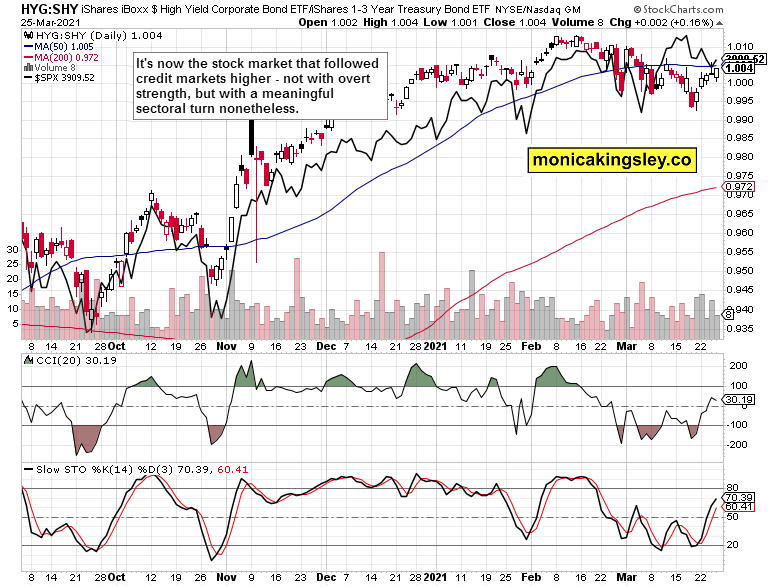 The high yield corporate bonds to short-dated Treasuries (HYG:SHY) ratio gave up all of yesterday‘s gains, but isn‘t leaving stocks as extended here. Much depends upon whether squaring the risk-on bets would continue, or not. Both stocks and the ratio appear consolidating here, and not rolling over to the downside. 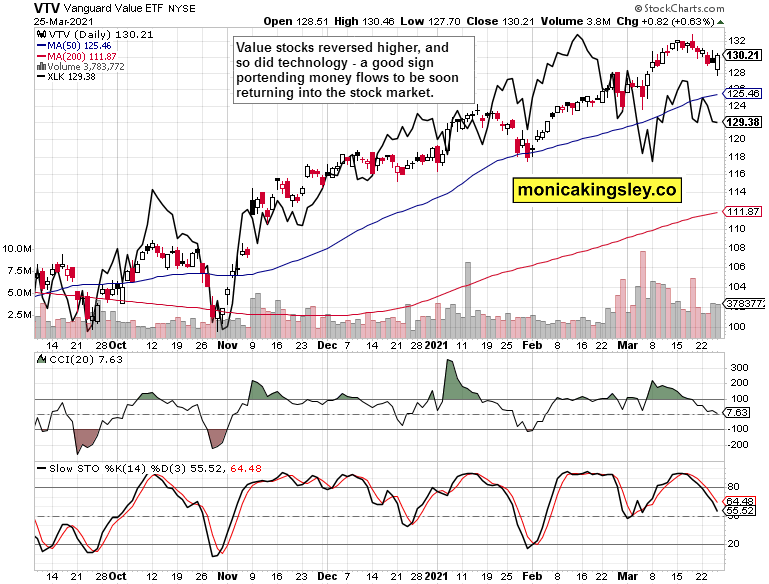 Value stocks (VTV ETF) finally showed clear leadership yesterday, the volume didn‘t disappoint, and technology (XLK ETF) recovered from prior downside on top. Closing about unchanged, it‘s key to the S&P 500 upswing continuation with force as opposed to muddling through. 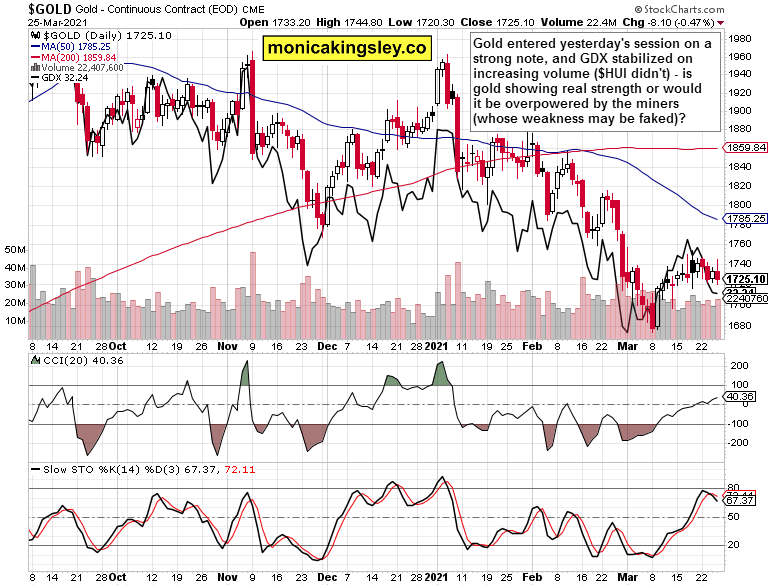 The troubled miners got a little less problematic yesterday. The GDX ETF recovered from intraday losses while gold didn‘t exactly plunge. Its opening strength was a pleasant sight as more often than not, miners‘ weakness while gold goes nowhere, is a signal for going short the metal. But as this sign didn‘t result in a gold slide, my viewpoint is turning bullish again because we might be seeing fake miners weakness that would be resolved over the coming week with an upswing. Now that the Wall and Main Street expectation for the coming week aren‘t probably as bullish as for the week almost over, an upswing would be easier to pull off (should it come to that). 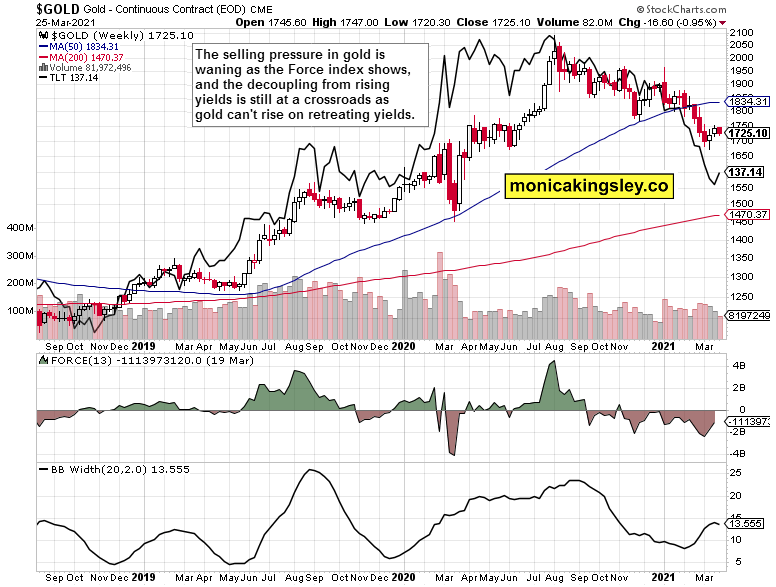 Big picture view remains (positively) mixed – the selling pressure is retreating but gold isn‘t yet reacting to declining yields. Once it clearly does, the waiting for a precious metals upswing would be over.

Silver staged an intraday reversal, which copper couldn‘t pull off. Not that it attempted to, but still the commodities selloff appears a bit overdone, given that nothing has fundamentally changed. Both gold and silver miners stabilized on the day, meaning that the sector is in a wait and see mode, unwilling to turn bearish just yet.

The odds of an S&P 500 upswing have gone up, and volatility made a powerful retreat below 20 once again. Value stocks have turned upwards, and the stock bulls appear readying another run.

Miners closed at least undecided yesterday, but gold and silver miners showing outperformance again is missing. Both metals still remain vulnerable to short-term downside. Once gold strengthens on declining yields, that would be another missing ingredient in the precious metals bull market.