The exchange traded funds landscape, in assets under management terms, is dominated by the “big three” of BlackRock (iShares), Vanguard and State Street (SPDR). A similar scenario is found in the indexing world.

There's a “big three” there, too – S&P Dow Jones, MSCI and FTSE Russell. Owing to the fact that across multiple market segments and asset classes these index providers offer competing benchmarks, this is one of the more compelling round robin rivalries in finance.

As experienced advisors well know, one of the segments in which S&P and FTSE Russell really butt heads is in the small-cap equity arena. That rivalry revolves around the S&P SmallCap 600 and the Russell 2000 indexes as well as the growth and value offshoots.

This piece isn't an endorsement of one of those indexes over the other, but the S&P SmallCap 600 turned 27 years old last week. More importantly, small-cap stocks are resuming the torrid paces seen earlier this year. Last week, the S&P SmallCap 600 Index celebrated its 27th birthday in style, soaring 6.41%, extending its year-to-date gain to 31%.

One of the primary reasons small caps impressed coming out of the coronavirus bear market and why some asset allocators are leaning toward the group today is smaller companies are domestically focused and few are export-dependent firms.

“A key reason for the strength of the S&P 600’s rebound in the past 12 months is its greater sensitivity to U.S. macroeconomic variables, as many investors revised upwards their economic projections amid vaccine announcements and the subsequent rollout,” notes S&P Dow Jones Indices. “Smaller companies are typically more domestically focused in their revenue exposures, which helps to explain why the S&P 600’s returns have been more correlated to changes in U.S. GDP growth and consumption and investment, historically.” 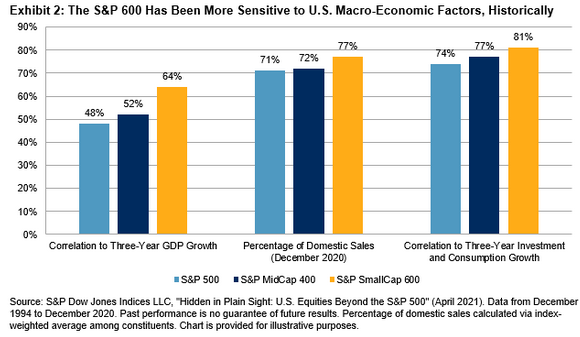 Indeed, the S&P SmallCap 600 has cyclical and reopening traits as it allocates nearly a third of its weight to financial services and consumer discretionary stocks, the former of which provides clients with some buffer against rising interest rates because small-cap financial stocks are often far more sensitive to Treasury yield gyrations than are their large-cap counterparts.

However, the S&P SmallCap 600 doesn't need rates to rise to deliver for clients. Over the past month, 10-year yields are lower by almost 7% while the small-cap benchmark is higher by 7.5%.

It might be surprising to clients that actively follow the active vs. passive debate (some advisors, too) that active managers, broadly speaking, don't fare all that well with small caps. The SPIVA U.S. Mid-Year 2021 Scorecard confirms as much.

That report shows domestic small-cap active managers didn't beat the S&P SmallCap 600 in 14 of the past 20 years.

Additionally, the S&P SmallCap 600 uses an earnings screen – a notable trait among small-cap indexes. Some rival benchmarks don't mimic that methodology, underscoring the point that as advisors talk about smaller stocks and related allocations with clients, the S&P SmallCap 600 Index is a viable building block.

Related: The Right Way to Get Clients Interested in Europe Again