The Unintended Consequence of Putting People in Boxes

The world’s population will reach 8 billion sometime in November 2022, and each one of those people has a different personality, different background and different set of values – making us all unique.

You wouldn’t know it though if you looked at how we design interactions with users in the social sector. I recently saw a mapping exercise taking place in the housing sector that listed 50 ‘customer groups’. Here’s a few of them:

And in case you felt left out..

How on earth can we categorise people like this?

And which box do you tick if you are a 50 year old executive who misuses alcohol as a result of previous involvement in the sex industry?

Seriously though – who would design services in such a way? What are we trying to say about people or achieve?

It’s certainly not just in housing. After John Seddon pointed out on Twitter that categorising NHS users as ‘frequent flyers’ or ‘bed blockers’ are living examples of failure demand, Alex Morrish asked a good question: 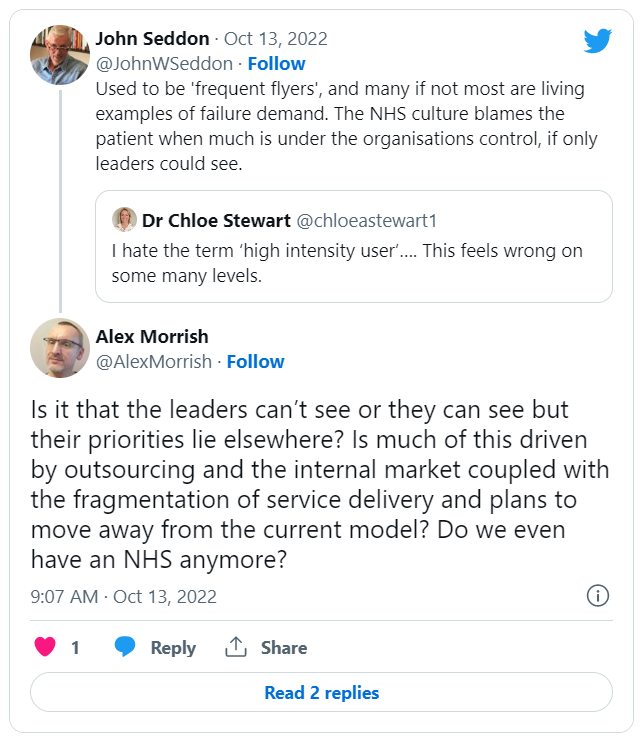 My take is that it can be both. Leaders who can’t see or have become unable to for all sorts of reasons. When the system has become accustomed to seeing people as walking problems it becomes self fulfilling. It becomes demand led – consuming more and more resource until it sinks under the weight of an entirely self created problem.

Seddon defines failure demand as demand caused by a failure to do something or do something right for the customer. Customers come back, making further demands, unnecessarily consuming the organisation’s resources because the service they receive is ineffective. 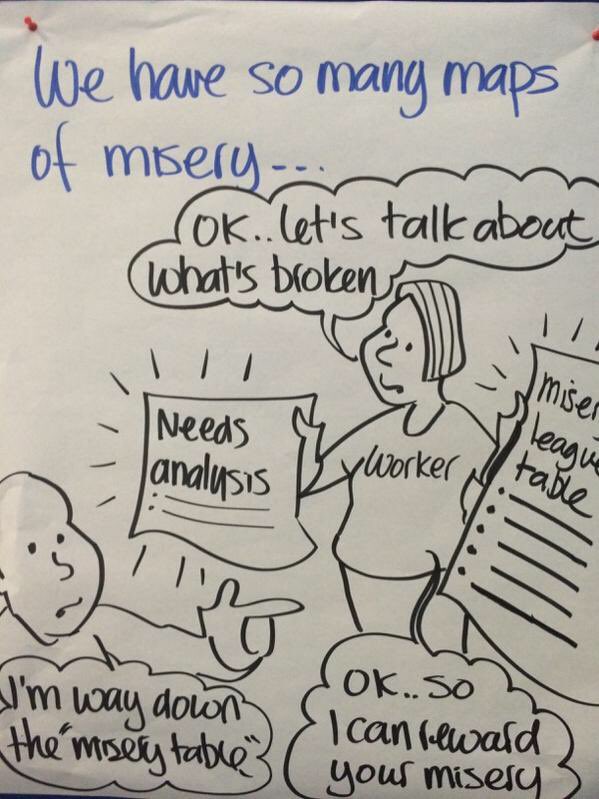 Placing people in these convenient boxes results in what people have termed misery mapping – putting humans into categories according to their particular problem. Although often borne out of good intentions it has the effect as John Wade describes: ‘the more examples of being broken that a service can find, the more things there are to fix and the more there is to fix the greater the need for the service or charity’.

Thinking about others in terms of their group memberships is known as social categorization—the natural cognitive process by which we place individuals into social groups. This helps us to make mental shortcuts, which are vital for quick decisions but an overgeneralization makes it more likely that we will think about and treat all members of a group in the same way. When we label people we end up limiting our curiosity about a person.

That’s why categorisations are so dangerous in a social sector contexts when understanding the needs of a user are so crucial. We’re not selling someone a Tesla, we are understanding their housing need or medical requirements.

If you’re using one of those 50 different labels to define someone you are literally failing to see the whole person. You are not having a conversation, you are not seeing, you are not listening – and that’s why you will misdiagnose the problem and keep them coming back.

50 different labels equals 50 different processes and 50 different ways to store data – the multiplier effect of this bureaucracy results in a system perfectly set up to go wrong.

Language, labels and jargon create confusion, risk and stigma but they also result in unnecessarily complicated and burdensome systems.