Do You Accept Closed Doors To Move On?

The question of whether you accept closed doors to move on or not has a double-sword edge to it.  It is essential to examine alternatives for obtaining a positive answer in the sales environment before we move on.  Otherwise, opportunities, one after another, slowly but surely disappear.

On the other side of the dilemma, being a nuisance never works.  More importantly, when we allow intuition to enter the reasoning behind what just occurred, it can and will point us to a better path.

My career experience roster is filled with stories about how I faced barriers, roadblocks, nastiness, and unethical behaviors.  The one qualifier I carry with me is that as soon as doubt about ethics or lack of honesty appears, I quickly move away, disconnecting from further communication.  Over time, it became apparent that those who attempt underhanded strategies will eventually pay a larger price.

When people told me they have no interest as a salesperson, I would counter with a question.  Eliminating any argument tone, I would softly ask if they would kindly tell me their ‘why’ to improve my effort.  Most people were happy to provide insights that proved to be helpful from that day forward.  And a small percentage had a change of heart as they saw me striving to learn.

Entrepreneurial endeavors require a broader range of ability to pursue many types of activities.  Accordingly, new ideas come to mind, and others present possibilities never before considered.  It is our job to qualify the offering to ensure it is consistent with our goals and priorities.  Our consistency defines our brand plus service to build credibility and trust in us.

One big differentiator between sales calls and entrepreneurial work is that the entrepreneur needs to be adept at making almost instant decisions. The action is where our intuition comes into play.  Many of us can ‘feel the vibe’ if an offer sounds genuine and whether the effort will be worthwhile.  The backup opportunity for intuition to play into the equation is when we wake up thinking about the project.  We know we need to make a decision.

This week, Carl called to express his frustration with a book project that was initially on full-speed.  My involvement is that with the help of a friend, I introduced Carl to Robert, the person who could assist with the project.  But the conversation quickly came to dead silence.  A few weeks later, I was able to reconnect and ask if he had a change of heart.  Sadly, I learned that he had a very mild case of the COVID19 virus.  The better news was that he had a keen interest in the material of the book.

Upon recuperating, Carl and Robert enjoyed follow-up conversations, and the project was once again, full speed ahead.  Unfortunately, the scenario repeated as Robert, once again, dropped out of communication.  Carl called to let me know the latest while his tone expressed much frustration. Unlike my previous gesture to reach out to see what Robert’s thinking is, my intuition says he probably had a relapse of the unthinkable.

However, amid frustration, Carl brought up an idea that I jumped on.  He mentioned that one family member has a video studio and that he could go that route instead.  Everything I have been hearing is that this is his opportunity to accept closed doors to move on.  Video is becoming more and more popular.  With the help of his family member, he will produce high-quality content for his audience. Even better, the upfront costs for creating the videos may well be far less than that of getting a book to market.

My additional tip is that he sings short snippets of his known songs to include in his videos series.  Carl likes my idea and will be getting to work shortly.  He came to realize that it’s necessary to accept closed doors to move on.

Our concerning environment continues to bring to mind the song ‘Stayin Alive’ by the Bee Gees as first heard in the movie Saturday Night Fever, starring John Travolta.  I hope you enjoy the YouTube version: 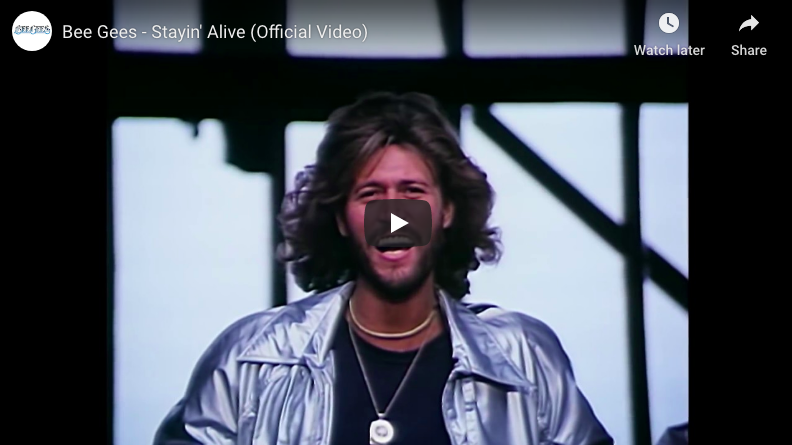