To Issue or Not to Issue? That Is Every Municipality’s Question

Last year the municipal (muni) market sold a total of $475.3 billion of debt, second to the record of $484.6 billion that was attained the previous year. Back-to-back historic supply would typically lead to greater selection and ultimately higher yields for investors, but the market essentially saw the opposite throughout the year. In fact, we witnessed the municipal market behave more like the supply constrained markets of Main Street for computer chips, used cars, and even the early pandemic market demand for toilet paper. It certainly did not help that more and more issuers continued to issue taxable municipal debt in lieu of traditional tax-exempt paper at a time when investors — who were anticipating higher tax burdens — poured record amounts of cash into tax-exempt muni bond funds. As a result, the municipal market of 2021 was mostly defined by:

There is little doubt that the municipal market’s supply-demand conundrum has been largely responsible for the weakening correlation between municipals and Treasuries over the past two years. 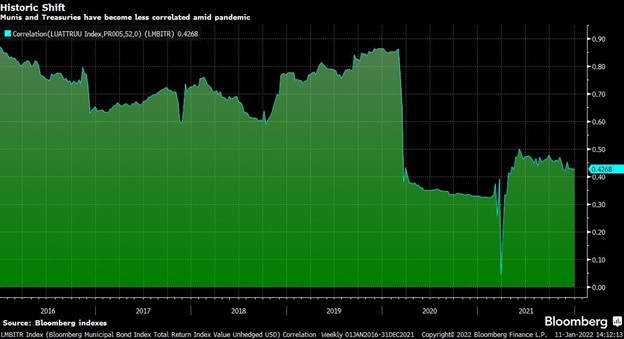 Based on the late 4th quarter forecasts of 11 of the largest municipal underwriters, states and municipalities are projected to sell an average of $470 billion of bonds in 2022, which would set the market up for a third consecutive year of record sales. Several of these estimates are contingent on a few key conditions coming to fruition and the following themes are currently among the most heavily scrutinized within the municipal universe:

The $1.2 trillion Infrastructure Investment and Jobs Act (IIJA) that was signed into law on November 15 allocated $550 billion of new spending into subsectors such as roads, bridges, transit, power, water, and broadband. Such a bill would theoretically be bullish for municipal credit quality as well as supply. However, like most government legislature, there is fine print to consider. First off, federal agencies have been tasked to oversee the distribution of these funds. Meanwhile, state and local governments will need to apply for said funds as they have a large say in determining which projects take precedence. According to the Department of Transportation, grants and loans could be distributed as early as mid-2022 but most of the funds are expected to be strategically dispersed over a five-year period. Outside of a clause that expands the use of private activity bonds (PAB), a form of municipal financing that is often subject to the Alternative Minimum Tax as well as numerous qualification testing categories, the IIJA bill lacked the bond-friendly provisions that many believed would meaningfully leverage the municipal market in the near term. With no direct subsidy on taxable interest costs, like the 2009 BABs program, or the reinstatement of tax-exempt advance refundings, it may be difficult to predict how much additional supply will be coming to the market by way of the infrastructure bill this year.

With the consumer price index climbing 7% on a year-over-year basis as of last Wednesday’s print, headline inflation is at its highest level in nearly 40 years. Costs have not only risen for individuals and corporations, but for municipalities as well. Considering the higher input costs for labor, real estate, and raw materials, a $500 million project in 2022 could hypothetically cost upwards of $600 million the following year. Given these challenges, we could see state and local governments not only increase the size of their debt sales but also pull forward projects that were further down the pipeline before they become even costlier. On a separate note, rising inflationary pressures were undoubtedly one of the main reasons why the Build Back Better bill was not passed last month. Should lawmakers continue to disagree this year, the municipal market, along with all the investors who anticipated higher tax burdens from the bill’s original proposal, may need to adjust their expectations accordingly.

Backed by strong tax revenues and federal relief, state and local governments are entering the new year on very solid financial footing. Last week, the state of California released a $213 billion general fund budget, which included a budget surplus of $45.7 billion, for fiscal 2022. Perennially one of the top issuers of the municipal market, the state allocated billions to continue their fight against COVID-19, wildfires, drought, and homelessness. These initiatives were all proposed without the aid of municipal debt financing. Afterward, Governor Gavin Newson even commented that his administration was looking for ways to reduce the state’s interest costs and ultimately the debt burden. On top of healthy government finances, elected officials might also need to consider the views that their respective constituents might have on increased spending and perhaps higher taxes. If Election Day 2021 was any indication of that sentiment — when voters across the country approved the lowest amount of local government debt in four years ($15 out of an eligible $27 billion) — state officials might have their hands tied when it comes time to repair their bridges, roads, and school buildings.

Through the first eight trading days of the year, U.S. Treasuries are returning -1.49% and the 10-year Treasury yield is up more than 20 basis points since December 31. Controlling four-decade-high inflation and calming market anxiety, while simultaneously reducing its $8.8 trillion balance sheet, will be among the Fed’s top priorities this year and the margin for error appears quite thin. When both interest rates and market volatility are biased toward the upside, state and local governments typically wait on the sidelines hoping for conditions to settle down. On the flip side, if interest rates were to stabilize or even reverse, we could see a flurry of municipal refunding deals hit the market. Either way, municipal issuers will have their hands full tackling macro challenges that were not necessarily present in 2021. 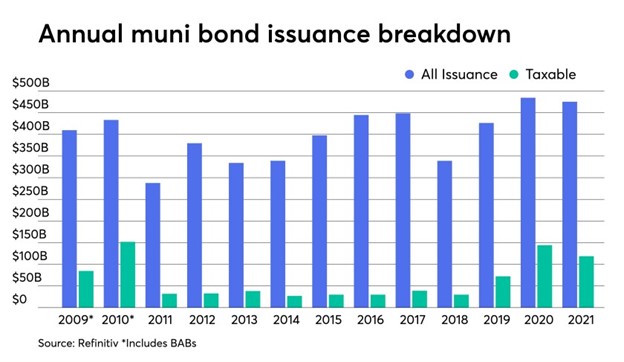 In our opinion, the +$500 billion supply targets that some underwriters projected might seem rather aggressive given the challenges outlined above, but we believe the 2022 landscape should be conducive for municipal debt sales. With rates still near their historic lows, fiscally responsible state and local governments should be able to efficiently access needed capital via the market municipal. Meanwhile, the demand for tax-exempt bonds, although it may not match the exuberance of 2021, does not appear to have an end in sight, at least on paper. Bank of America estimates a total of $540 billion ($406 billion of principal redemptions and another $133 billion of coupon income) will be returned to investors in 2022. Assuming the majority, if not all, of the cash is invested back into the market, reinvestment needs alone should keep municipals well bid throughout the year. Lastly, for those concerned about broad rate volatility, we believe investors have reason to be confident in the track record: the municipal asset class has historically outperformed its taxable counterparts during periods of rising rates. In other words, the higher yields rise, the more after-tax income investors have the potential to keep in their pockets.