Bond Badness: What Worked in Fixed Income May Be on Borrowed Time

Advisors and clients paying ample attention to fixed income markets in 2021 may just be counting down the days until the year is over. With the widely observed Bloomberg US Aggregate Bond Index off 1.57% year-to-date, it's easy to understand why.

A combination of 10-year yield volatility, historically low interest rates, the specter of when those rates will move higher and persistent inflation are among the factors crimping bonds in 2021 while trying advisors' (and clients') patience.

As noted above, plenty of market participants are wagering a simple change of the calendar while ameliorate today's fixed income issues. Advisors know better. Sure, it's possible aggregate bond strategies improve upon 2021 performances next year. However, the reality is 2022 could be just as if not more trying on bond investors than this year has been.

Two points confirm as much. First, with less than two months left in 2021, it's clear that inflation is going to linger into next year. Pinpointing when consumer prices will decline is a futile endeavor. It could happen in February or March or in October or November. Or not at all. Second, it's nearly a sure thing that the Federal Reserve will raise rates at least once next year.

Over the past couple of years, some prevailing propped up bond markets and that propping was largely built on a foundation of ample easy monetary policy and the notion that inflation, if it arrived at all (obviously, it did), would be transitory. Today, those assumptions are changing and advisors need to get out in front of those shifts.

“The final destination of transitory inflation remains in flux, casting central bank policy into tightening mode in some geographies and uncertainty in the U.S. and Europe,” says BlackRock. “Unprecedented amounts of liquidity are starting to slowly drain from the financial system, creating risks for market participants that have been reaching for yield. China’s reluctance to inject stimulus into its flagging economy may create waves in global growth projections.”

Remember the following. First, the October reading of the Consumer Price Index (CPI) showed a 6.2% year-over-year spike. Second, 2021 is on pace to be just the fourth time since 1976 that aggregate bond indexes post negative annual returns. Regarding inflation, there's another issue for advisors to grapple with. As the chart below indicates, it's not a distinctly U.S. phenomenon, meaning advisors can't rush to international bonds to buffer clients portfolios from rising consumer prices. 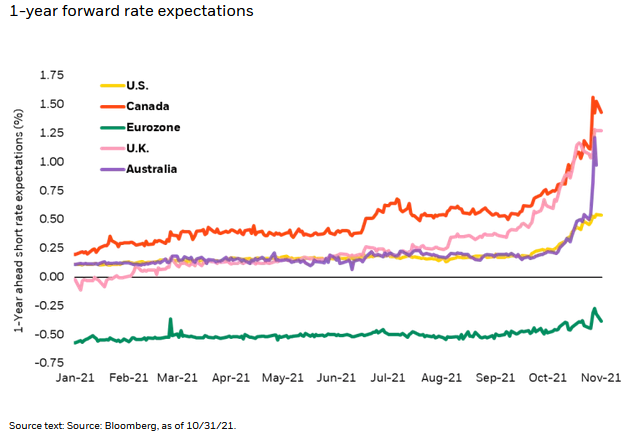 “As global economies reopened in the beginning of the year, inflation reflected the combined forces of a surge in demand with a significant disruption in supply,” adds BlackRock. “The most recent inflation reports highlight spreading inflation pressures into key areas associated with sticky rather than transitory inflation in rent, wages, and passthrough sale price increases from higher input costs.”

Another thing advisors are all too familiar with this year is the yield conundrum, as in from where to source income for clients.

These days, advisors face a classic scenario of not enough yield on low-risk bonds or having to elevate risk profiles to reach for yield in the junk space, but even that's not the best of strategies because credit spreads are depressed.

Throw in the specter of Fed tapering and 2022 could be a very challenging year on the bond front. The best options advisors have may just be fixed income groups with positive correlations to rising rates, such as convertibles. Bottom line: Gird for another year tricky year ahead in the fixed income universe.