The Beginning of the End of an Era in Bonds

In 1982, Pierre Trudeau was Prime Minister of Canada. M*A*S*H and Dallas were hit TV shows. The first commercially available laptop computer, the Osborne 1, had just been released; it weighed almost 24 pounds. Motorola was still a year away from its first commercial cellphone (MSRP: US$4,000) and Sir Tim Berners-Lee was seven years away from inventing the World Wide Web. We could go on, of course, but the somewhat jejune point is clear: a lot has changed over the past four decades. Yet for investors, amid all the cultural, social, technological and political transformations (notwithstanding a Trudeau still leads Canada), one thing has remained the same: bond prices have, over the long term, kept going up, and bond yields have kept going down.

The economist Herbert Stein once famously said, “If something cannot go on forever, it will stop.” The secular bond bull of the last decades of the 20th century and the first decades of the 21st is perhaps among the more remarkable capital market stories in history. And while it is undeniably long in the tooth, it is not yet officially over, despite the current cyclical bond bear market as the global economy recovers from the impact of COVID-19. Yet perhaps this resurgence in yields provides an opportune moment to wonder when Stein’s Law will kick in for the secular bond bull. After all, rates cannot decline forever, so at some point they will stop. When we think about that reality, two issues stand out. One is how far rates have fallen and how unsustainable ultra-low rates are, and the other is the dramatic shift from U.S. Federal Reserve policy priorities in the early 1980s under chair Paul Volcker to the Fed’s priorities today under Jerome Powell.

The rate environment in the Volcker era is almost unfathomable when compared with today’s. Throughout the world’s major economies, bond yields in the early 1980s were literally at multi-century highs – in the range of 20% for short-duration bonds and 15% for long bonds, according to Bloomberg data. That is why we ended up with the best bull bond market in history: it started at the highest level of rates in history. Look at where rates are now, however. As Bloomberg also shows, last year ended with global negative-yielding debt surpassing US$18 trillion, representing more than a quarter of all investment-grade debt (Thanks to bond issuance by governments fighting COVID, that was actually an improvement over earlier in 2020, when sub-zero bonds comprised 30% of the market) Central bank-set overnight rates are still negative in several jurisdictions, including Europe, Japan, Denmark and Switzerland. 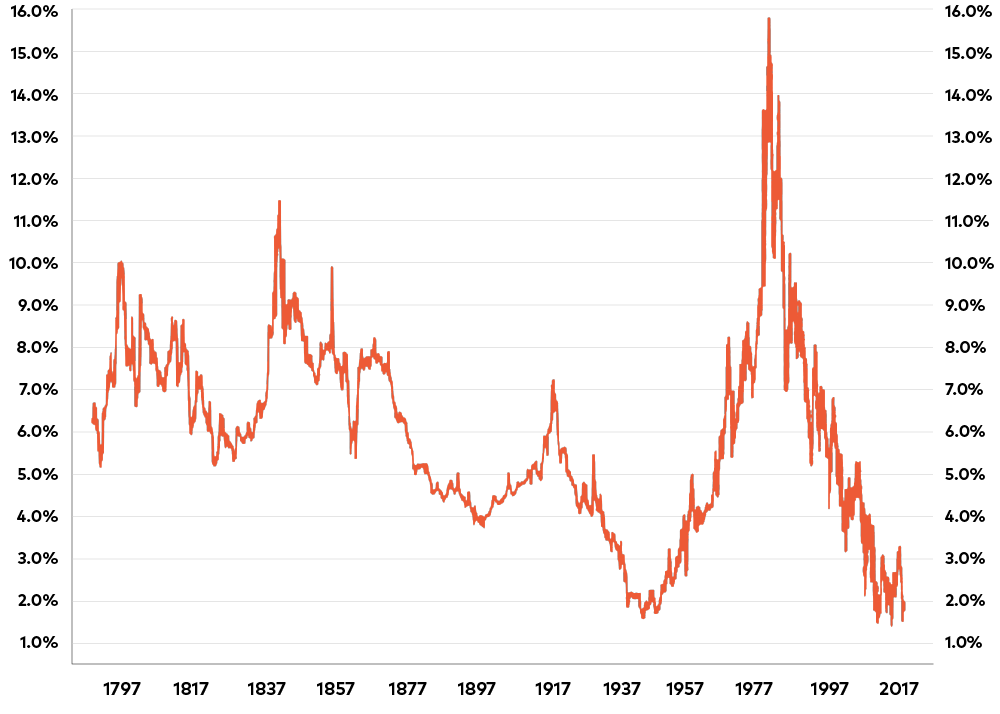 We understand that there may be reasons to rationalize sub-zero rates, and that investors can in certain instances still generate returns from them. Those rationales, however, do not contradict the simple reality that negative rates are antithetical to the way economies should normally work. It simply does not make sense on any sustainable basis to pay someone to borrow money. When you think about how fundamentally illogical that is, and when you consider the huge proportion of bond and overnight markets that got to negative yields, then it’s reasonable to conclude that declining rates are getting closer to the end of the runway than to the beginning. Negative yields cannot go on forever, so eventually they will stop.

Of course, these radical changes in yield trends do not occur in a vacuum. Central bank policy is a critical factor, and none is more important than Fed policy. Remember, the Fed has a twin mandate: to maximize employment (effectively, maximize economic output) and to maintain inflation at a moderate level. Now go back to 1979, when Paul Volcker became Fed chair. The U.S. economy had experienced nearly 15 years of increasingly toxic inflation, and Volcker decided to focus on combating inflation even at the expense of the other pillar of the Fed mandate. The Volcker Fed drove rates up to break the back of inflation, and while that contributed to the early 1980s recession and a spike in unemployment, the campaign ultimately succeeded. Volcker subdued inflation with historically high rates, and he set up the secular bond bull that has thrived for nearly 40 years.

Jump to today and the Fed’s new regime under Jerome Powell. By adopting average inflation targeting last summer, the Fed is basically saying that it is less concerned about inflation than it was before. Instead, the Powell Fed is more focused on maximizing output and employment, in large part because monetary policy has struggled to do so over the past two decades. In the obverse of the way Volcker set aside output and employment to fight inflation, Powell could be setting aside inflation concerns to boost output and employment – in effect, putting one part of the Fed mandate on the back burner to fix a challenge with the other. That should have ramifications for the future and, if the Fed succeeds, it could be a major contributing factor to a potential change in trend. So it seems reasonable to ask: Is Powell setting the stage for a long-running secular bond bear market, as opposed to just the current cyclical bond bear market?

This is not to suggest that a shift to a secular bear market is imminent. These things tend not to happen quickly. When we look at historical secular bond moves over the past couple of hundred years, rates turn upwards from lows very gradually. Such a measured shift would make sense in this cycle, as well. Debt levels are so high that the global economy simply cannot accommodate a fast reset to much higher rates, and we are likely to remain in a low-rate environment for years to come. Other factors such as demographics and tech-related disinflation may also continue to keep a lid on yields. Importantly, we will know a secular bear has arrived only in retrospect. It will take years of inflation sustainably above 2% to reliably suggest the trend has shifted. Another indicator would be a multi-year rounded base (“saucer bottom”) for yields, which has historically signalled a secular change for bond markets. Most importantly, debt levels need to start receding sustainably for yields to be able to rise secularly.

Yet despite those caveats, in our view it is prudent to note that the groundwork is gradually being laid for a secular bond bear somewhere down the road. Rates are unlikely to be able to fall much further. Negative rates are unsustainable. The Fed has turned more tolerant of inflation risk while prioritizing output and employment. These are not guarantees of higher yields, but they are signposts on that path. The secular bond bear will not happen overnight, and in our view it is still not imminent, but it will come eventually. And paying attention to its timing and magnitude will be critical to capital market returns going forward.

The views expressed in this blog are those of the author and do not necessarily represent the opinions of AGF, its subsidiaries or any of its affiliated companies, funds or investment strategies.

The commentaries contained herein are provided as a general source of information based on information available as of March 25, 2021 and should not be considered as investment advice or an offer or solicitations to buy and/or sell securities. Every effort has been made to ensure accuracy in these commentaries at the time of publication, however, accuracy cannot be guaranteed. Investors are expected to obtain professional investment advice.