Should ETF Investors Be Worried about the Delisting of Chinese Equities?

On December 2, 2020, the House of Representatives voted to pass the Holding Foreign Companies Accountable Act, which passed the Senate in May. President Trump is expected to sign it into law.

The competitive landscape between of the U.S. and China still exists. The U.S.’s market efficiency, work ethic, freedom of speech and well-tested legal system is still a formidable advantage and attraction to foreign companies. But whether, and how, this issue is resolved is a good signal to watch regarding U.S.-China economic dynamics over the next four years.

To answer my question from the title, in short: no. Here are a few things to keep in mind around these recent announcements.

1. The Bill Provides a Three-Year Window for U.S.-China Negotiations.

The bill gives companies three years to become compliant. This is crucial, because in absence of a U.S.-China compromise, the natural home for delisted companies such as Alibaba Group Holding and Baidu is the Hong Kong Stock Exchange (HKSE), which has actively courted them to dual-list their shares.

Even now that the delisting law is forecast to become official, Chinese companies continue to list in the U.S., showing the attractiveness of the U.S. financial and legal system.

For example, Chinese dating app company BlueCity had its IPO in the U.S. in July. It gave investors renewed hope and confidence that this issue would be resolved.

The dispute is now focused on who has the power to audit the auditors such as Ernst&Young-China, Public Company Accounting Oversight Board (PCAOB) or China’s equivalent organization.

Before the trade war in 2017, China and the U.S. were already testing a potential solution that would allow both regulators to have authority. PCAOB did an audit test run in tandem with its Chinese equivalent, though was not entirely satisfied with the process. With a new administration in the U.S. in 2021, this issue is highly likely to achieve satisfactory compromises on both sides.

2. ETFs Are Impacted Differently Than Individual Stocks, and WisdomTree Is Already Trading HK shares Where Liquidity Is Sufficient

That brings us to the second point. If these companies already have dual listings by the time the law passes, investors in exchange-traded funds (ETFs) that seek to track indexes—such as the WisdomTree China ex-State-Owned Enterprises Index (CHXSOE)—wouldn’t even notice the impact on their portfolios.

A swap of New York Stock Exchange (NYSE) shares for Hong Kong shares would most likely be treated as a corporate action, which portfolio managers deal with daily. For investors who directly own those stocks, it may be a bit more complicated, depending on how their brokerages handle corporate actions.

WisdomTree has already started trading the HK shares of dual-listed companies where liquidity is sufficient. For an ETF investor, this is already happening in the background. For individual investors, swapping the U.S. share for a Hong Kong share will be a taxable capital gains event in regular accounts. The tax advantage of the ETF structure shines through in events like this.

3. The Role of the PCAOB

The history of the PCAOB is as much about regulatory power as protecting investors from fraud; it was created in response to the 2001 Enron scandal. Enron’s auditor is believed to have colluded with the company to manipulate and falsify its accounting records.

The PCAOB is supposed to be the auditor’s auditor, regulating accounting companies such as Ernst &Young (EY) and PricewaterhouseCoopers (PwC).

Most of the Chinese companies listed on the NYSE use the Chinese branches of the Big Four U.S. auditors. Chinese firm Luckin Coffee—which has been accused of committing accounting fraud—used EY as its auditor. But most news articles missed the fact that EY didn’t certify Luckin’s recent annual report, which is believed to have covered the period when the fraud allegedly occurred. Presumably for legal reasons, EY has been silent on whether its auditing independently uncovered fraud. Emerging markets companies generally carry a valuation discount for the possibility of accounting fraud, so it is not evident that delisting would help protect U.S. investors.

4. Other Regulatory Risks in Chinese Equities (Besides Delisting)

Chinese equities have other risks beyond delisting. If U.S. public opinion were to turn sharply against China—if, for example, an investment in any Chinese stock was seen as analogous to investing in South Africa during the apartheid era—then there would be substantial divestment, which could lead to lower valuations.

So far, that kind of opinion has not translated into mainstream investment actions. Based on most of the sanctions imposed to date, the non-state-owned segment of the Chinese equity market is likely to be less politically controversial than banks or state-owned energy firms. The latest White House executive order forbidding investment in some Chinese equities with military ties was also mainly directed toward state-owned companies.

Chinese technology companies also face relentless headwinds from Chinese regulators, such as Ant Group’s IPO debacle and China’s platform antitrust regulations released in November for comments. On December 14, subsidiaries of Alibaba and Tencent were fined the maximum amount allowed of 500,000 RMB (about $77,000) for not filing for their acquisitions. Around the same time, Alibaba, JD, Meituan, Pinduoduo, etc., were sternly warned by the People’s Daily against getting into the community grocery group shopping business , with the implication that these tech giants are threatening jobs of generally lower skilled local grocery workers.

In a separate, more detailed, Market Insight article, I lay out the legal and social history behind the antitrust issue and continue to argue that these headwinds are headline grabbing, but not of significant risk to China’s tech and consumer discretionary sectors. Part of doing business in China is the challenge of whether/how much to accept and manage the constraints of opaque regulatory risk.

5. Potential Outcomes of a Reciprocity-Based Strategy

Based on the U.S. response to Chinese restrictions on airline travel between the two countries this year, as well as executive actions and legal challenges against TikTok and WeChat, a theme of reciprocity in market access seems to be driving economic conflicts.

This reciprocity-based strategy does not suggest  a dramatic escalation of U.S.-China financial conflict over the next four years or so, such as forbidding U.S. investors from investing in any Chinese equity, whether listed on the HKSE or the Chinese mainland.

The hope—the belief—is still that the U.S. and China will work out some issues based on mutual benefits and common ground, with a whack-a-mole game of broad economic and political conflicts persisting decades down the road.

We can only follow Winston Churchill’s advice: “It is a mistake to try to look too far ahead. The chain of destiny can only be grasped one link at a time.”

The final point is that the primary factor driving Chinese equities is their expected earnings growth rate and whether actual growth supports current valuations.

Pinduoduo, an e-commerce company that directly competes with Alibaba and JD.com, has seen heavy volatility recently. It delivered high growth, but sometimes not as much as the Street had hoped given its rich valuation. The top non-state-owned Chinese firms, which are the most vibrant segment of the Chinese economy, have delivered significant sales growth compared to top U.S. firms in the S&P 500.

Future earnings and stock price increases of these companies will come from both U.S. and Chinese economic growth continuing to support global growth. 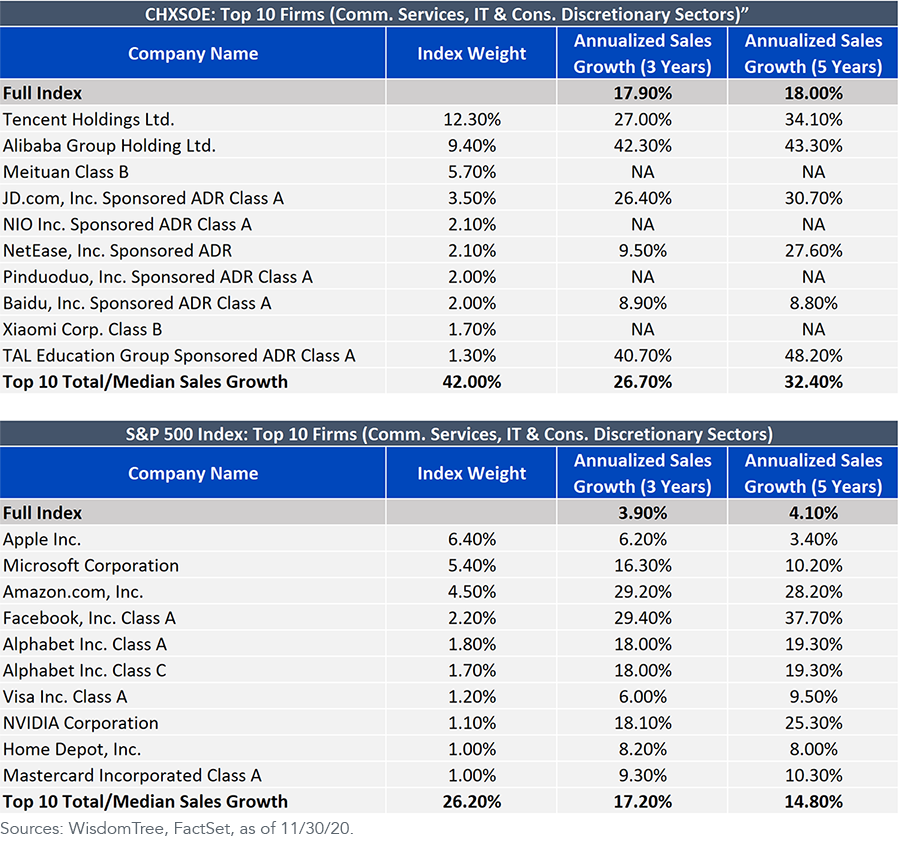 Related: These ETFs Might Help Explain Why Your Portfolio Is up or Down