Hidden Gem of Dividends Is Hiding in Plain Sight

Advisors that have been in business awhile and savvy, income-oriented clients don't usually associate the technology sector with dividends.

In fact, of the 11 sectors represented in the S&P 500, perhaps none – save for communication services owing to the inclusion of former tech stocks – are less associated with dividends than technology. That's not surprising because the tech-heavy Nasdaq-100 Index (NDX) and the S&P 500 Technology Index currently yield 0.53% and 0.78%, respectively.

Those aren't numbers that are going to get income-starved clients excited. However, the face of technology dividends is changing for the better and that's a positive for advisors because tech usually isn't a tough sell for clients. With dividends credibly on the table in the sector, there's one more reason to embrace the largest sector exposure in the S&P 500.

Of course, how advisors access tech for dividends matters nearly as much as knowing that the sector's payout legitimacy is increasing. Due to the fact that the tech is still new, relatively speaking on the dividend scene, it takes more than knowing that Apple (NASDAQ:AAPL) and Microsoft (NASDAQ:MSFT) are dividend payers.

What to Tell Clients

Some clients may already know that until about a decade ago, finding tech companies that paid dividends was difficult. Ask many market participants to name a tech dividend payer with a lengthy increase streak and most are likely to say IBM (NYSE:IBM) and that's it. However, the payout scene is changing for the better.

“The times have changed. According to S&P Dow Jones sector data, by 2020, approximately one-half of all technology stocks now pay a dividend and almost one-third are growing those dividends,” according to ProShares research. “The trend toward paying and growing dividends is also meaningful when compared with one of the sector’s consistent storylines—share buybacks.”

Tech's relevancy as a dividend destination is cemented by the fact that many of dividend-paying names in this sector – Apple and Microsoft being prime examples – fit the bill as quality companies. Yes, it's undeniable that tech is associated with the growth factor and rightfully so, but the sector is also home to a slew of cash-rich, high return on equity, wide moat firms.

As noted with the cash component, quality companies – regardless of sector – usually have strong balance sheets. That's a crucial trait because it means a company has the means to sustain current dividend obligations while growing those payouts in the futures. Speaking of growth, that's exactly what's happening with tech dividends.

“Since 2011, the tech sector has quadrupled its dividend payout, and has grown dividends at a compound annual growth rate of over 16%, far exceeding other S&P 1500 sectors and the broad market in general,” notes ProShares. 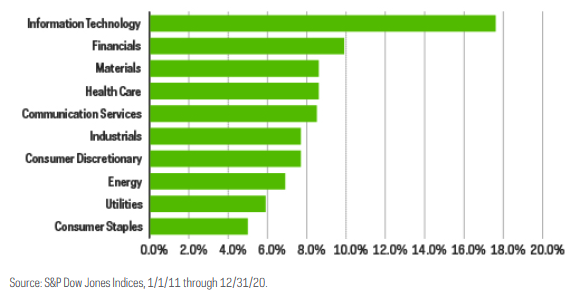 Putting It Into Practice

Owing to the aforementioned newness of the tech/dividend marriage, there aren't many funds dedicated to this concept. One that is the ProShares S&P Technology Dividend Aristocrats ETF (NYSEARCA:TDV).

TDV tracks the S&P® Technology Dividend Aristocrats® Index, which requires member firms to have dividend increase streaks of at least seven years. Additionally, the fund is equal-weighted, meaning it significantly reduces the concentration risk that comes along with cap-weighted tech strategies. That's advantageous for another reason: Components in TDV's index trade at more attractive multiples than the broader technology sector. All of that is to say there are some fine reasons to talk tech dividends with clients.

“The technology sector has become a critically important component of today’s market. The sector has matured over time, and now represents some of the largest and most successful companies,” adds ProShares. “That success has translated into increasingly large amounts of cash being returned to shareholders, and tech stocks have become the second-largest source of the market’s dividends. Technology stocks have also been growing their dividends at a faster rate than any other sector in the market.”

Ideas to Consider as Quality Comes Back Into Style

Metaverse Could be Marvelous in New ETF Form

Advisors, It's Time to Talk Taxes with Wealthy Clients