Gusher of Cash Funneling Into ETFs Could Turn Into Tidal Wave

Market participants, including advisors, are again allocating massive amounts of capital to exchange traded funds. Through the first four months of 2021, inflows to domestically traded ETFs reside north of $320 billion.

For those that need convincing that's a big number and one that affirms the status of ETFs as perhaps this century's dominant capital allocation strategy, here's some context. Last year, ETF inflows were a record $507.4 billion, meaning this year's tally through four months is about 60% of the 2020 haul. The prior annual record was $476.1 billion in 2017. That could be taken out in by the end of June.

Before getting into some of the factors driving ETF flows, it's worth noting the aforementioned data points don't spell the end of active management. Among the many things I've learned in a decade-plus of being involved in the ETF business, it's that folks – including money managers themselves – love a good active/passive debate.

Just my two cents, but perhaps the only subject folks are more dug in about is politics and it's not unreasonable to say the active/passive debate contains nearly the same amount of conjecture and misinformation. All that aside, the rise of ETFs doesn't mean active management is dying. Rather, it's evolving because data confirm active managers are getting hip to the ETF structure. In fact, US-listed active ETFs now have a record $329 billion in assets under management.

A primary reason for extended ETF ebullience to this point in 2021 is the recovery trade.

“US-listed ETFs have been on a roll for the past six months, taking in $482 billion since the end of October — with $325 billion amassed in the first four months of 2021 alone,” notes Matthew Bartolini, SPDR Americas head of research. “ETFs are on the greatest three-, four-, six-, and twelve-month rolls ever, as shown below. On a six-month basis, the $482 billion is four times the typical average.” 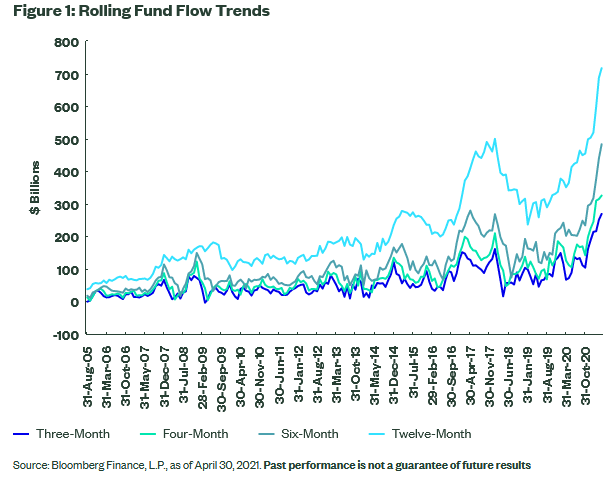 Of note to advisors is that sector funds, particularly those with cyclical leanings, are major recipients of ETF flows this year.

“The flows were also once again heavily skewed towards cyclical segments, such as Financials (+$ 2 billion), Materials (+$1.8 billion), Energy (+$1.5 billion), and Real Estate ($1.3 billion),” said Bartolini. “Overall, cyclicals outpaced defensives by $8 billion in April — their seventh month in a row of doing so and have now out-earned defensives by $40 billion over those months.”

Save for a sharp reversal in equities or a rapid acceleration of 10-year yields through the psychologically important 2% level, it's not a stretch to say ETF flows while continue their impressive

In fact, President Biden's effort to raise capital gains taxes on the wealthy, could add fuel to the fire of ETF inflows.

“If capital gains tax rates are going to be higher, if you have a choice of a structure that helps to defer capital gains and gives you more control over when to recognize those gains, you’d be more inclined to go in that direction,” said David Perlman, an ETF strategist at UBS Global Wealth Management in an interview with Bloomberg.

It's as simple as the tax-efficient creation and redemption process used by ETFs becomes more attractive against the backdrop of rising capital gains levies and that's a credible catalyst for more cash moving into ETFs.

Broadening Healthcare Sector Horizons Can Pay Off for Clients