Why You Should Care About a $208,000 Video of LeBron James Dunking

Jesse Schwarz could have bought a Lamborghini.

He could have placed a winning bid on Jimi Hendrix’s guitar. Or paid off a mortgage. Instead, the 32-year-old entrepreneur spent $208,000 on a video clip of LeBron James dunking a basketball.

Schwarz didn’t buy the broadcast rights to the clip or even a physical copy. He got a few lines of computer code that proves he owns the ten-second digital video.

Christie’s, the revered 255-year-old auction house, recently held its first-ever NFT art sale. It was a collage of five thousand digital images created by a digital artist known as Beeple: 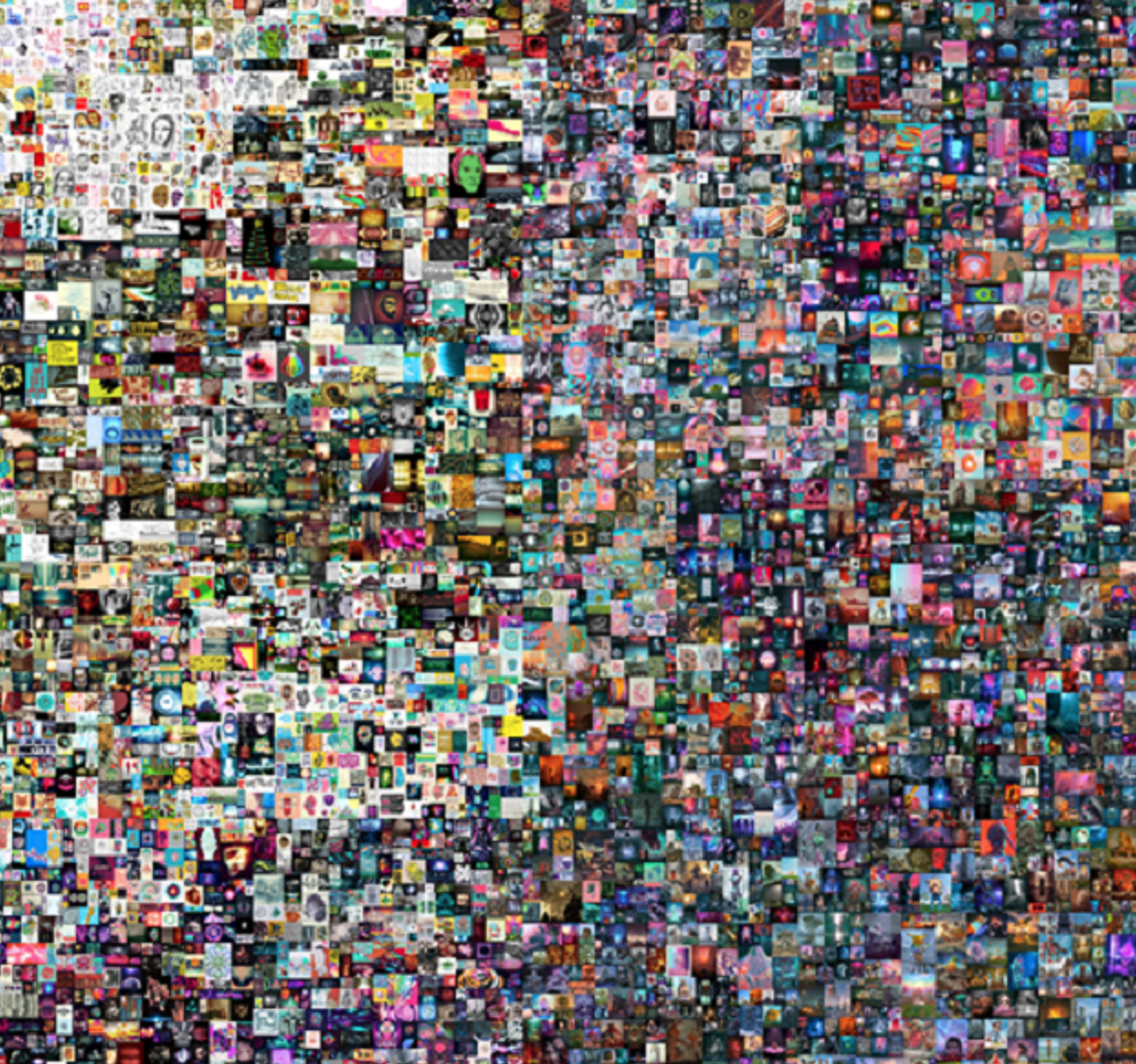 I know what you’re thinking. Did someone really blow $70 million on an internet image? To make sense of this madness, we have to dive into the crypto world.

You’ve surely heard of Bitcoin before. The cryptocurrency was created back in 2008 and is valued at over $600 billion today. Bitcoin was the first application of an incredible new technology called blockchain.

I could spend the next ten pages explaining blockchain, but here’s a quick run-down.

Blockchain is a new way to record transactions and asset ownership. It’s essentially a permanent digital record. Blockchain allows anyone to verify an asset’s authenticity and ownership. Assets stored on blockchains are unfalsifiable, which allows for trust and authenticity in ways that weren’t possible before.

A non-fungible token (NFT) is a certificate of ownership stored on a blockchain. Think of them as virtual deeds.

Each NFT is tied to a specific item, like artwork or a video clip. It acts as a unique serial number certifying the authenticity and ownership of that digital asset.

For example, the video Jesse Schwarz bought for $208,000 is the only LeBron James NFT from NBA’s Top Shot series. Blockchain records show he owns the only certified clip. And get this… the NBA’s NFT sales topped $700 million+ in less than a year.

Guys, you’re telling me NFTs are basically digital files. Guess what? Internet files are pretty worthless. Anyone can rip that $69 million painting off Google.

I get why NFTs sound ridiculous. There’s little difference between the NFT-backed LeBron James dunk and the one you can watch on YouTube for free. So why are folks splurging millions of dollars on them?

Collectors have pondered this question for years. Take The Mona Lisa, for example.

The Mona Lisa has been reproduced millions of times. It’s on every t-shirt and postcard sold at Paris’ Louvre. You can Google the painting now and make it your desktop background. But there’s only one Mona Lisa. And the original is worth hundreds of millions of dollars.

In short, the value comes from owning the verifiable, real thing. An authentic Picasso is worth millions of dollars. You can buy a perfect replica for ten bucks on eBay. The fact that both paintings look the same when hung on a wall doesn’t influence their value.

This is why blockchain and NFTs are huge breakthroughs. Digital files can be replicated infinitely, so there was no way to prove you owned the real thing. How do you authenticate a YouTube clip that can be shared a million times?

But remember, NFTs act as a unique serial number certifying the authenticity of an asset. They make it possible to own a digital original for the first time ever. NFTs enable the mind-bending idea of digital rarity.

Many of the world’s most iconic companies are experimenting with NFTs. 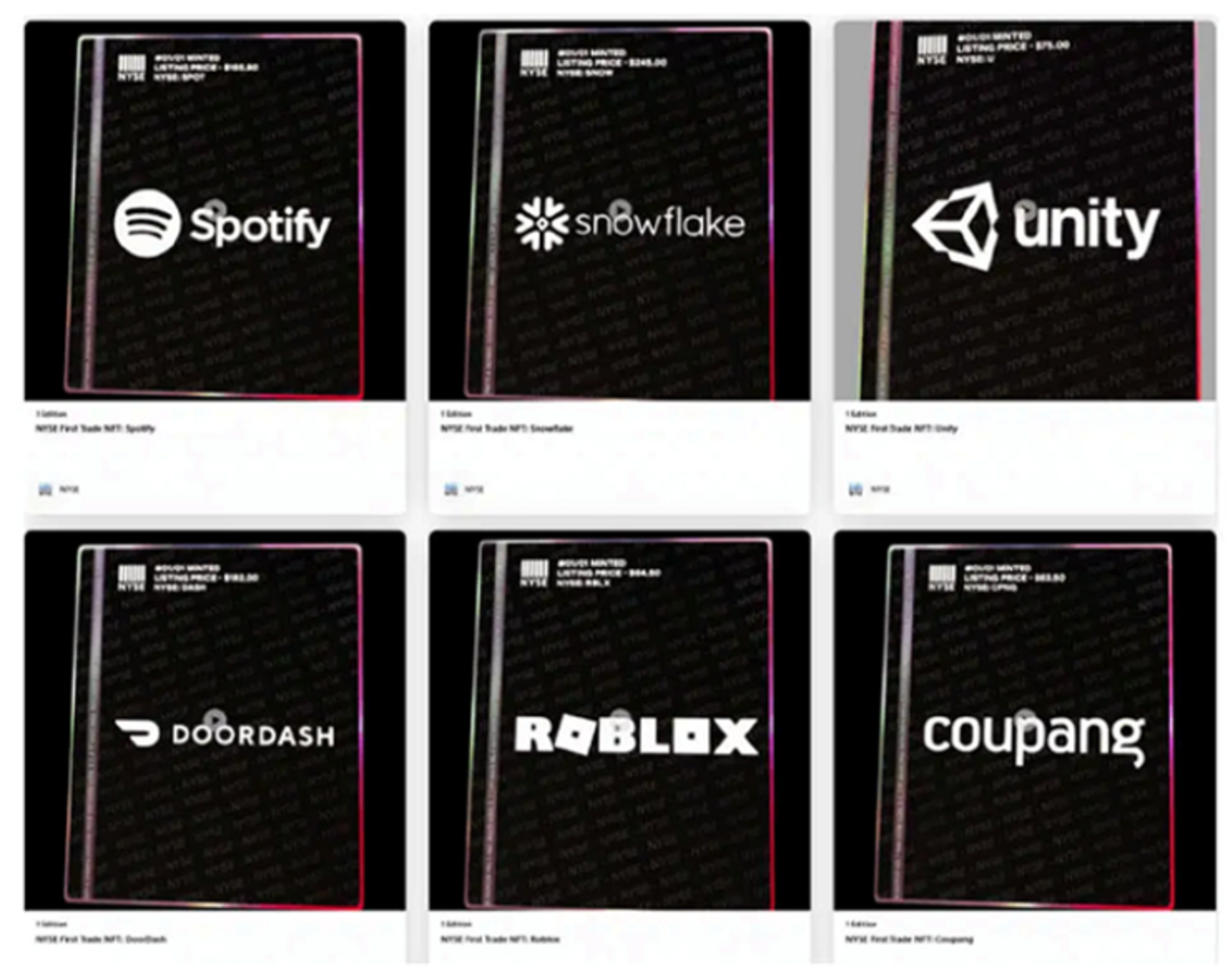 NFTs have stormed the hallowed halls of centuries-old art houses like Christie’s and Sotheby’s too.

Sotheby’s recent “Natively Digital: A Curated NFT Sale” fetched $17 million. The fine arts company also opened its first virtual gallery. It’s a replica of Sotheby’s real-world building in London. You can go to events in the virtual gallery and look at NFT artwork on display.

Luxury brands are cashing in on the digital asset gold rush, too. Gucci recently sold its Fall/Winter 2021 collection ad as an NFT for $25,000. The designer also started selling one-of-a-kind digital sneakers.

And a few months ago, Louis Vuitton, Richemont, and Prada launched a blockchain platform to enable NFT sales. Watchmakers like Rolex and Hublot are in talks with Sotheby’s to auction digital replicas.

Where Will NFTs Be in Five Years?

Now everything from the NBA… to Formula One… and Louis Vuitton is involved. Sales of these digital assets have topped $2 billion this year. 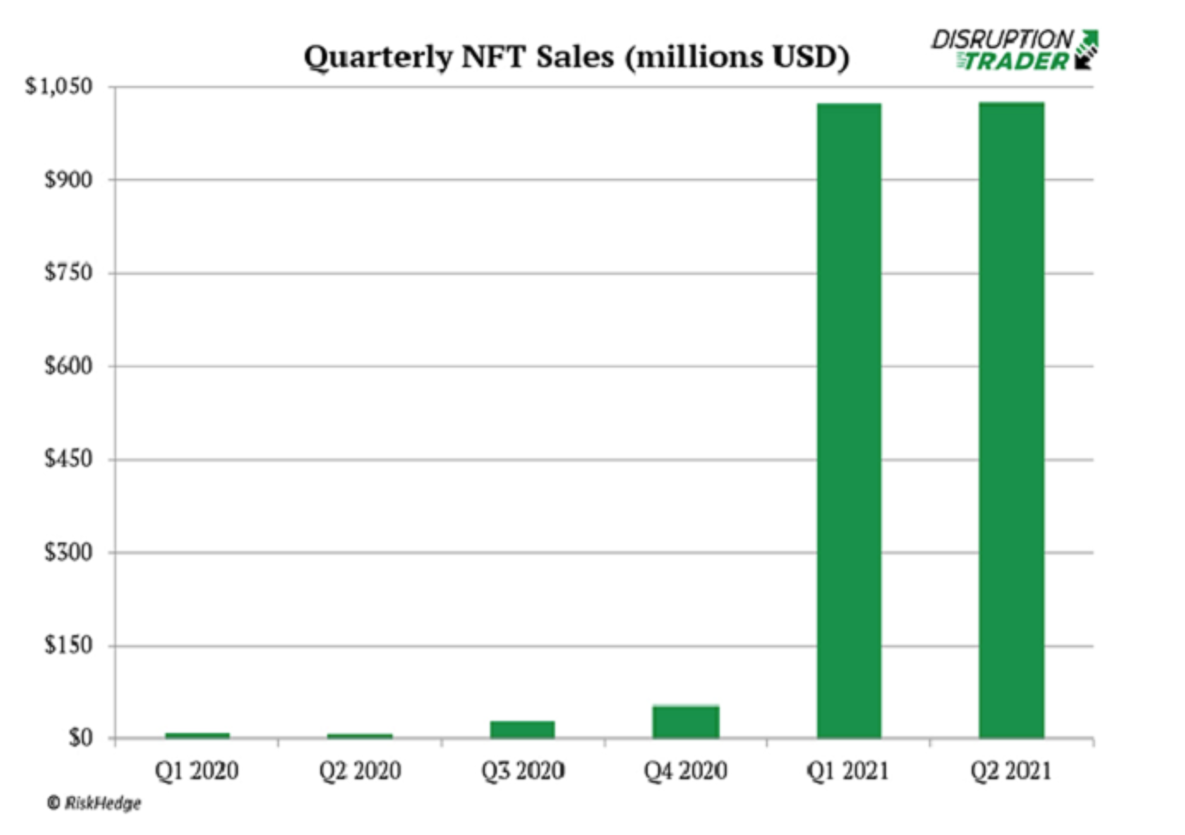 There’s a lot of skepticism about this breakthrough tech. Many folks think, “NFTs are dumb. Who wants to own a digital original when I can copy and paste it for free?”

Here’s the thing… there’s always skepticism surrounding new technologies. A banker at JP Morgan once told Henry Ford that cars were just toys for rich people. And as recently as 2000, journalists thought the web was a fad: 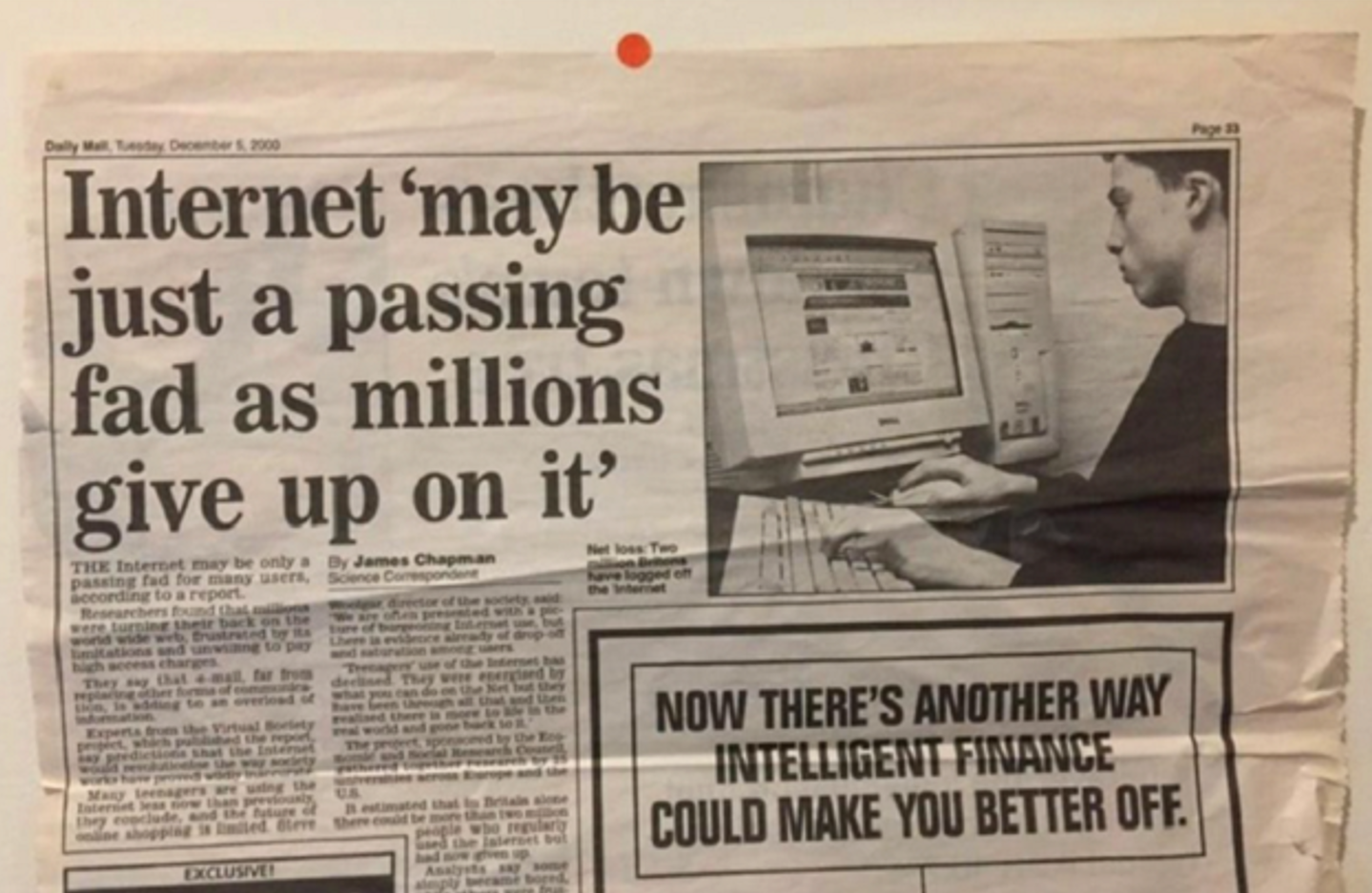 Every major disruption is always filled with hype. NFTs are no different. But look past the $69 million digital painting, and you’ll see a game-changing technology.

Remember, NFTs make virtual goods provably rare, which was never possible before. In the past, digital meant fake. Nothing digital could be trusted as real.

This tech is magic in that it creates unforgeable digital assets. It’s an incredibly powerful thing... And I bet it will lead to dozens of new uses that are hard to fathom today.

I’m not saying you should rush out and spend thousands of dollars on digital watches. Just like physical collectibles, most NFTs will be worthless. What I am saying is the underlying technology can unlock new multibillion-dollar markets.

For example, imagine you’re living in 2040, and roughly $100 trillion worth of assets are being digitally transacted. Each deal will automatically come with proof of ownership—an NFT on a blockchain.

And we won’t have to wait 20 years for this tech to become useful. I predict all event ticketing will soon run on NFTs.

NFT-backed tickets would totally stamp out scams and fakes. NFTs live on a blockchain, which makes it easy to authenticate and verify every ticket. You could instantly recognize fakes. It’s obvious that within five years, all ticketing will run on this tech.

I see the same cynicism toward NFTs today as I did with cryptocurrency Bitcoin a couple of years ago. Folks couldn’t wrap their heads around the idea that something totally virtual could be worth real money.

But blockchain catapulted Bitcoin to a $600 billion valuation. This breakthrough tech is also behind multibillion-dollar NFT markets.

Don't let the silliness of $208k digital files distract you from the opportunity here. This space will be fertile ground for very lucrative investments. I'll let you know when one comes across my desk...