5 Bitcoin Developments You Need to Know About

I want to start by addressing the recent pullback in Bitcoin and Ether prices, as well as shares of crypto miners, since Bitcoin hit a new record high last week. It’s important for investors to remember that the crypto ecosystem remains, and is expected to remain, highly volatile.

Whereas gold bullion and the S&P 500 have a standard deviation of ±1% over a single trading day, Bitcoin has one closer to ±4%. Ether’s is even higher at ±6%, and HIVE Blockchain Technologies can easily go up or down 8% during any given trading session.

Needless to say, the crypto ecosystem is high-risk and potentially high-reward, and it’s essential that investors who are thinking of participating manage their expectations.

There’s much more to cover from last week that was! Below are five Bitcoin developments you need to know.

1. The first Bitcoin ETF was also the fastest to $1 billion in assets

Many of you reading this may be aware that Wall Street finally got a Bitcoin-linked ETF. The ProShares Bitcoin Strategy ETF (BITO), which tracks the performance of Bitcoin futures contracts, was first out of the gate last Monday, mere days after the Securities and Exchange Commission (SEC) said it would no longer block the issuance of investment products related to the digital asset.

But that’s not the only record BITO now holds. The ETF attracted over $1 billion in as little as two days after its debut, making it the fastest ever to reach that milestone. The previous recordholder, appropriately enough, was State Street’s SPDR Gold Shares ETF (GLD), launched in 2004. It took the popular gold-backed ETF three days to reach $1 billion in assets.

BITO may be the first, but it will hardly be the last. A second Bitcoin futures fund, the actively managed Valkyrie Bitcoin Strategy ETF (BTF), became available for trading on Friday.

Having said that, not everyone is jumping to buy a Bitcoin futures contract. Of the nearly 700 people who took a recent HIVE poll, more than three quarters said they were either “probably” or “absolutely” not interested in an ETF that tracks the futures market. Presumably they are holding out for a Bitcoin spot ETF, or they would prefer to own the crypto outright. 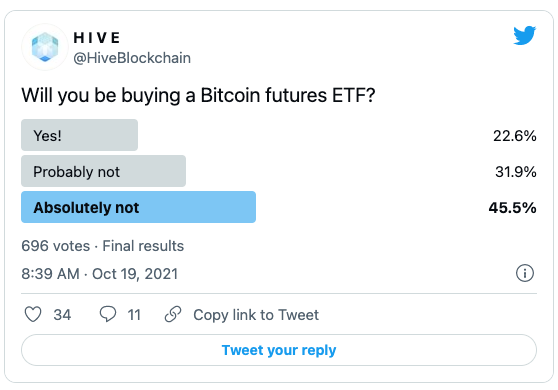 The price of Bitcoin topped $66,000 for the first time ever last Wednesday, pushing its market cap above an incredible $1.3 trillion. The surge was driven largely by the debut of BITO as well as the undeniable power of FOMO, or fear of missing out.

This has reawakened speculation that the crypto is headed for $100,000, perhaps as early as year’s end. Take a look at the logarithmic chart below. Each horizontal line represents a growth factor of 10.

BITO wasn’t the only love Bitcoin got from institutional investors last week. For the first time ever, a U.S. pension fund has invested in the space. On Thursday, the $5.5 billion Houston Firefighters’ Relief and Retirement Fund (HFRRF) announced that it had purchased $25 million in Bitcoin and Ether, representing a “watershed moment for Bitcoin and its place in public pensions,” according to Nate Conrad, Global Head of Asset Management at New York Digital Investment Group (NYDIG), which facilitated the purchase. “Fiduciaries are increasingly aware of how even a small allocation to digital assets can make a big impact over time,” Conrad went on.

Like BITO, this allocation may be the first of its kind, but I don’t believe it will be the last. Imagine what would happen to Bitcoin and Ether’s price if the approximately $440 billion California Public Employees’ Retirement System (CalPERS), the largest such fund in the U.S., got involved.

4. Walmart now has Bitcoin ATMs, with plans for thousands more

Well, now nearly anyone will be able to convert their loose change into “worthless” Bitcoin at their neighborhood Walmart. Last week, it was being reported that Walmart quietly began installing special Coinstar machines at select locations that give customers the option to buy Bitcoin.

Some 200 kiosks are currently available at the giant retailer, but according to Bloomberg, there are plans to install as many as 8,000 of them over time.

On a final note, the Bitcoin Mining Council (BMC) released its quarterly report last week, and it contained much to celebrate about Bitcoin. If you recall, this group came together during the summer in response to Elon Musk’s claims that Bitcoin mining consumed too much energy, and too much dirty energy. The Council’s findings, on the other hand, tell a very different story.

According to the group, which is headed by MicroStrategy CEO Michael Saylor, and of which HIVE is a member, Bitcoin mining uses a negligible amount of energy globally when stacked against any major country and even any major industry, gold mining included.

In fact, you may be surprised to learn that Bitcoin mining uses even less energy than holiday lights do every year.

And contrary to Elon Musk’s claims, the network uses a more sustainable energy mix than any major country on earth. Germany leads this list at nearly half renewable, whereas the global Bitcoin mining network is estimated to be 57.7%. The figure rises to almost 66% for the members of the BMC. And then there’s HIVE, which uses 100% green renewable energy to mine Bitcoin and Ether. To learn what else might be driving Bitcoin prices right now, be sure to watch my video on Metcalfe’s Law by clicking here!

U.S. Global Investors is very proud to have been a sponsor of the 2021 Health Care Heroes, the annual event that celebrates the doctors, nurses, researchers and other health care professionals who serve our hometown of San Antonio. On behalf of everyone at the company, I tip my hat off to all of you! Thank you for keeping our community safe and healthy, particularly over this past year.

Related: How to Help Nervous Clients Nibble at Bitcoin