Will Gold Shine Under Bidenomics?

Bidenomics is a big departure from sound economics. But when reason sleeps, gold fortunes are born.

Biden’s triumph in the presidential election does not just mean that a new man lives in the White House. It actually implies a fundamental shift in economic policy . Some analysts even see Biden’s agenda as a decisive break with neoliberalism or “Washington consensus”.

You see, in the old orthodoxy, most economists trusted in markets, argued for privatization, deregulation, and liberalization. Taxes and social benefits should be low and don’t discourage work and investments. The governments should run balanced budgets, avoiding large and permanent fiscal deficits , while central banks should hike interest rates to prevent inflation from running out of control.

The focus was on scarcity and limited supply. The economy was believed to operate generally at potential, so the key factors to fast economic growth were structural reforms and adequate supply-side policy to strengthen incentives to work and invest. Governments shouldn’t run fiscal deficits as they could crowd out private investments, and they shouldn’t stimulate the demand as it would misallocate resources and could overheat the economy, leading to inflation. The monetary policy was better suited to occasionally fight economic crises .

How much has changed! Now, the focus is on slack and the demand side of the economy. The growth is held by chronic lack of demand – this is the key tenet of Keynesian economics, the hypothesis of secular stagnation, and the Modern Monetary Theory – so, governments and central banks should continuously stimulate the economy through easy monetary and fiscal policies . As real interest rates are low and demand is weak, rising public debt is not a problem. Inflation is not a problem either; after all, if there is always slack in the economy which operates below its full potential, there is practically no risk of inflation.

Indeed, Biden has pushed the American Rescue Plan Act of $1.9 trillion (or about 9%of the GDP ) without presenting any plan of longer-term deficit reduction. And additional huge government expenditures are coming with Biden’s infrastructure plan. It seems that no one is interested any longer in how the government is going to pay for its spending and obligations, or in long-term consequences of practically unprecedentedly large fiscal deficits (see the chart below). Interest rates are low, so let’s live like there’s no tomorrow! 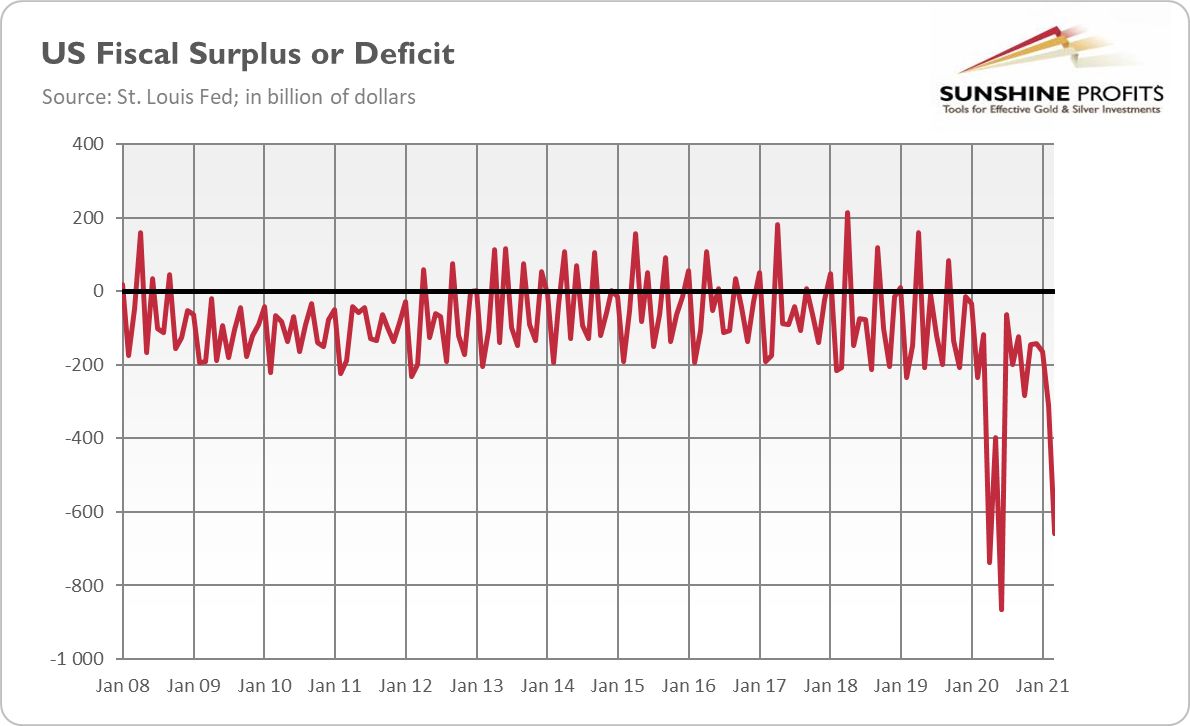 Another notable example is, of course, the Fed’s new monetary framework. The US central bank has ultimately disregarded the idea of the Philips curve and the natural rate of unemployment . There is no level of employment that could boost the inflation rate, so there is no need for any preventive actions. What really counts is the actual inflation rate, not the expected one. The central bank shouldn’t fight with symmetrical deviations from the economy’s long-term path determined by technological progress and other supply-side factors any longer, but only with shortfalls from the full employment.

So, what does Bidenomics (and Powellomics) imply for the gold market? Well, Biden is not the first politician who thinks that there are no economic limits to his ideas. But the pandemic and the economic crisis, the environment of ultra-low interest rates, and the fact that the Democratic base has shifted further to the left implies that Bidenomics may become a radical departure from sound economics. However, a crazy idea that “borrow & spend without a limit” is the key to prosperity is positive for the gold market , as the yellow metal is a safe-haven asset and a hedge against insane economic policies.

What is important here is the fact that we have actually tested this approach. In 1960, just like today, the Keynesian economists who dominated in the mainstream (and politicians who trusted them) thought that the main task of economic policy is to actively and permanently stimulate aggregate demand. The result was stagflation in the 1970s, as it turned out that economies may overheat as well. Gold shined then, so it should also benefit today from similarly unsound economic ideas and policies.

So far, the pace of economic recovery has been fast, while the inflation rate has remained limited. But this may change quickly when people stop trusting that the Fed and the government will swiftly take action to contain inflation if it breaks out. However, given the current mindset and macroeconomic ideas, how probable is it that the policymakers will accept substantial interest rate hikes, cuts in spending, and probably also a recession when faced with 1970s-style inflation? Not very likely, indeed. Hence, if inflation continues to rise, while the Fed remains ultra- dovish , inflationary expectations may become unanchored, and inflation may get out of control taking gold with it on a wild journey north.

Related: Rising Cost Pressure: What Will Mr. Powell and Gold Do?