The United States is just at the beginning of a housing boom that could last for the next five years. Of course, most folks who are either homeowners or are in the market to buy a home understand that prices have gone up quite substantially over the last year. Indeed, the Case Shiller 20 city average of home prices is up about 17% compared to last year. The US only saw annual price increases like this in the 2002-2005 housing boom period. 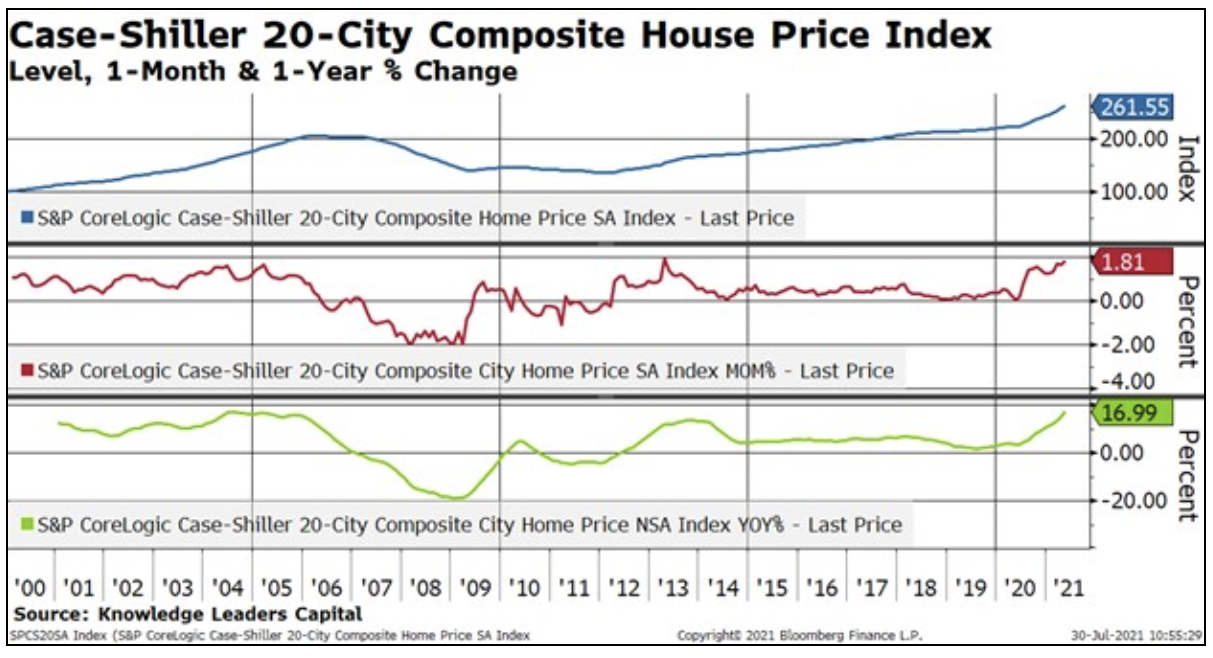 But, what we are focusing on here is not price increases necessarily, but actual housing construction activity and all its knock-on economic effects. In contrast to the early naught housing boom that was at least in part driven by shoddy lending standards, this one appears to be squarely driven by an utter lack of housing inventory. As readers can see in the next chart, existing houses for sale per working age adult have never been lower in the history of our dataset. Houses for sale per adult are a fraction of the level that existed during the 2002-2005 housing boom. 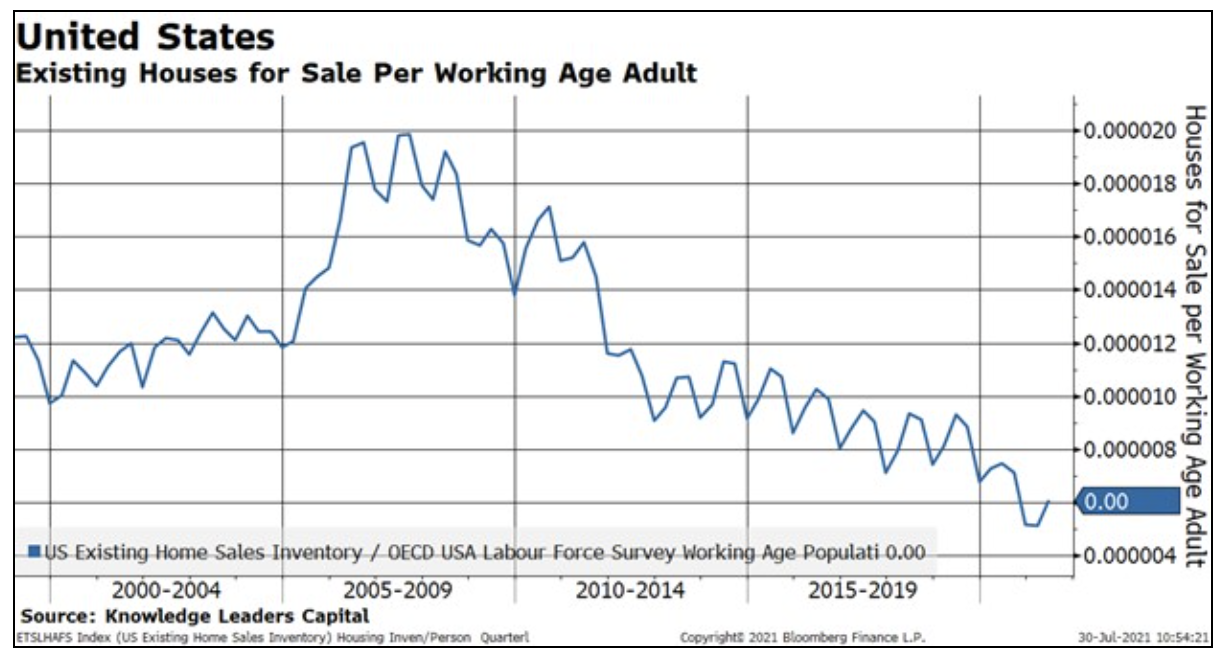 This lack of inventory, as opposed to price pressures, appear to be a larger explanation for the deteriorating sentiment of homebuyers recently. It’s true that the University of Michigan’s “good time to buy a house” survey hit a record low in June, but we also observe that housing affordability does not necessarily appear to be the primary driver. Indeed, not only is absolute housing affordability at levels consistent with or better than most of the 2009-2020 period, but income-adjusted mortgage payments for new homebuyers remain very accommodative. For this we can thank 30-year fixed mortgage rates that are below 3% nationally. Clearly, another year or two of 17% price increases, or rising mortgage rates, would eat into housing affordability in a huge way. But we think a more likely outcome is that building activity accelerates on a sustained basis just as soon as supply chain disruptions ease around materials, appliances, and labor. 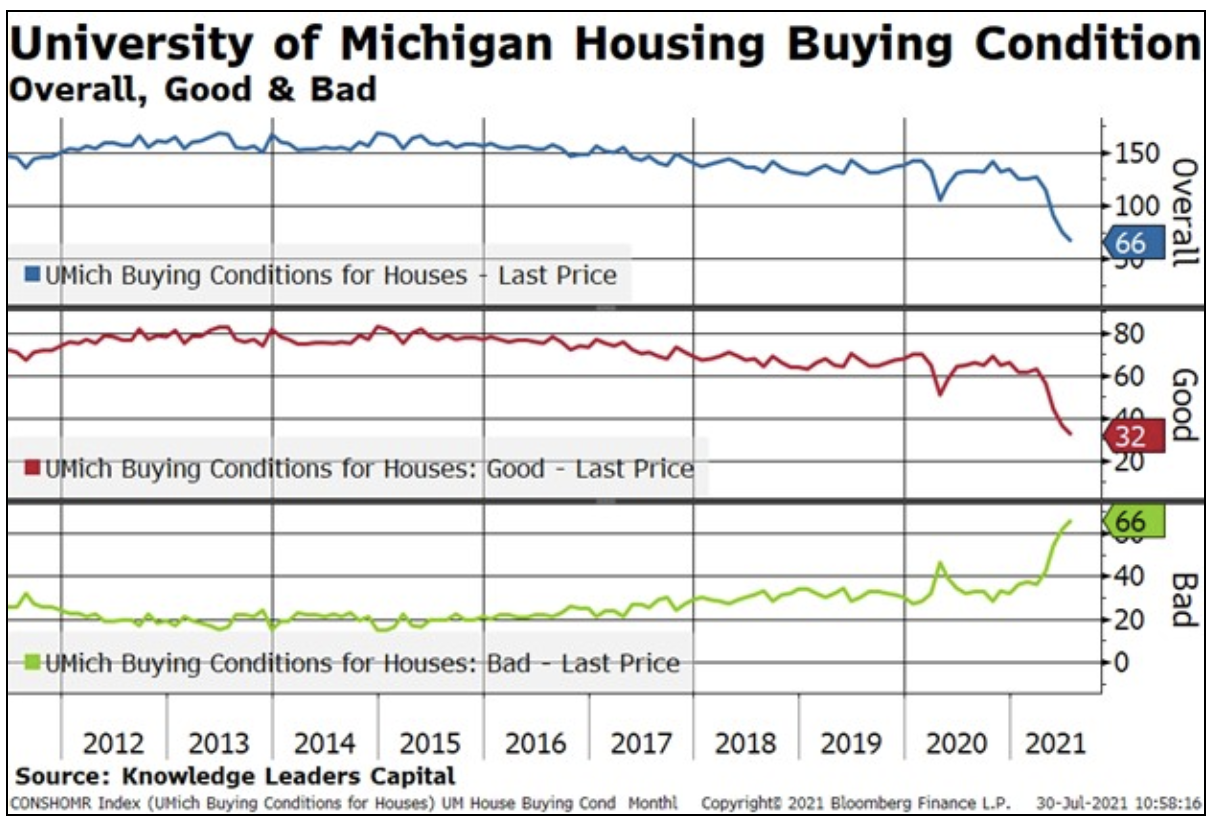 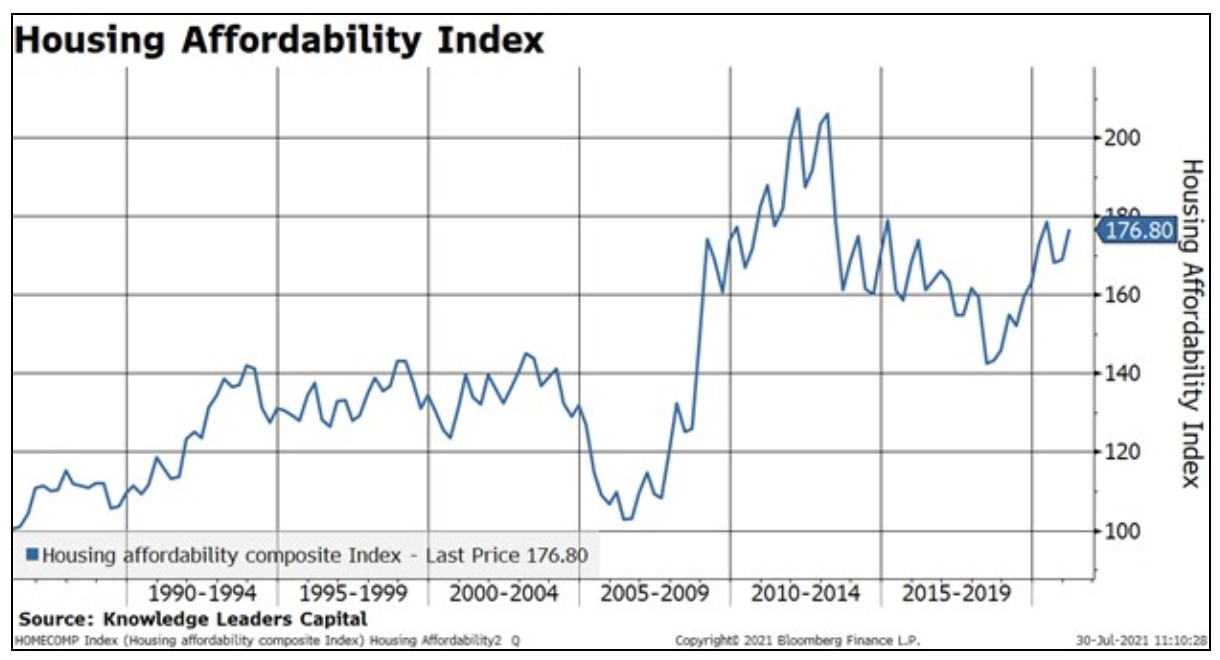 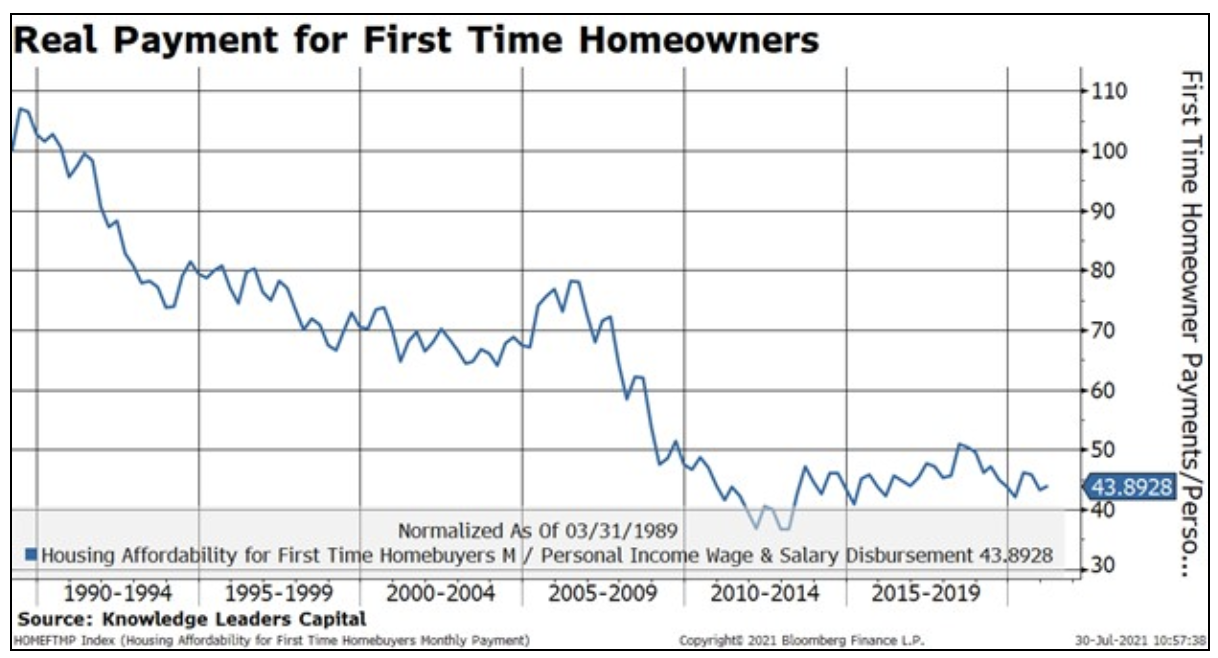 Following the housing bust in the 2007-2009 period, and the excess inventory it created, homebuilders responded by slashing construction of new homes. New home construction fell from an average of 2M units per year in 2006 (too many units) to an average of less than 1M units per year (too few units) for the entire 2009-2020 period. This occurred at a time when the working age population (the group most likely to buy new houses) in the US increased by 9M people and the total population increased by 25M people. The lack of construction for the last decade, and especially over the last five years when a lack of inventory has become a major issue, appears to be a significant, if not the primary driver of house price appreciation. 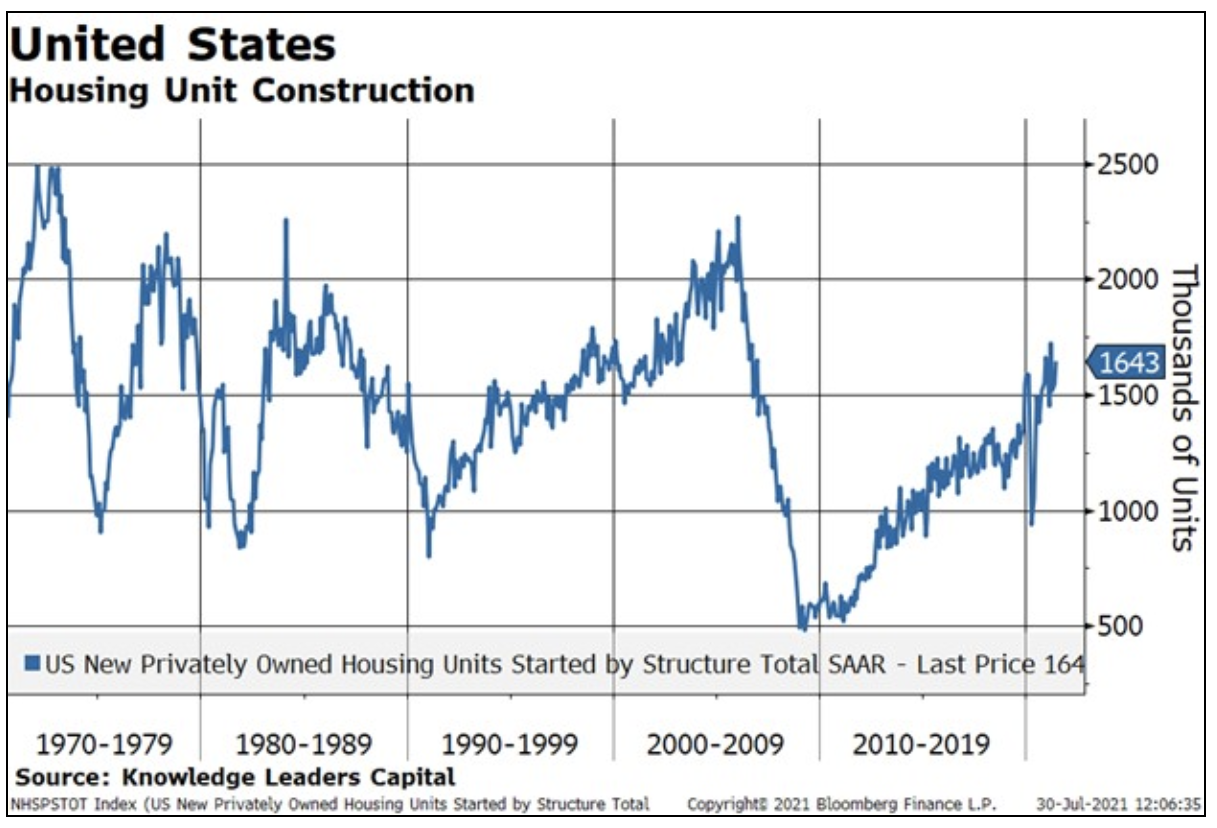 The solution is an easy one: build more housing units. The hard part is that the US is short A LOT of housing units. Indeed, the 5-year cumulative construction of housing units per working age adult stands at just 0.36 compared to an average (including both boom and bust years) of 0.48 going back to 1980. For new housing units per working age adult to get back to average over the next five years, it will require construction to run at an annual pace of 1.95M units per year. This compares to 1.6m units in June (annualized), 1.3M units over the last 5 years, 800K units from the 2010-2014 period, and 1.88M units from 2002-2006. Said in other words, the US will need to construct as many homes as it did during the peak housing boom years, in each of the next five years, to in order to get new construction per adult back to normal levels. Said differently again, the US will need to construct nearly 50% more units each year over the next five years as we constructed over the last five years, on average. That is what you call a boom! 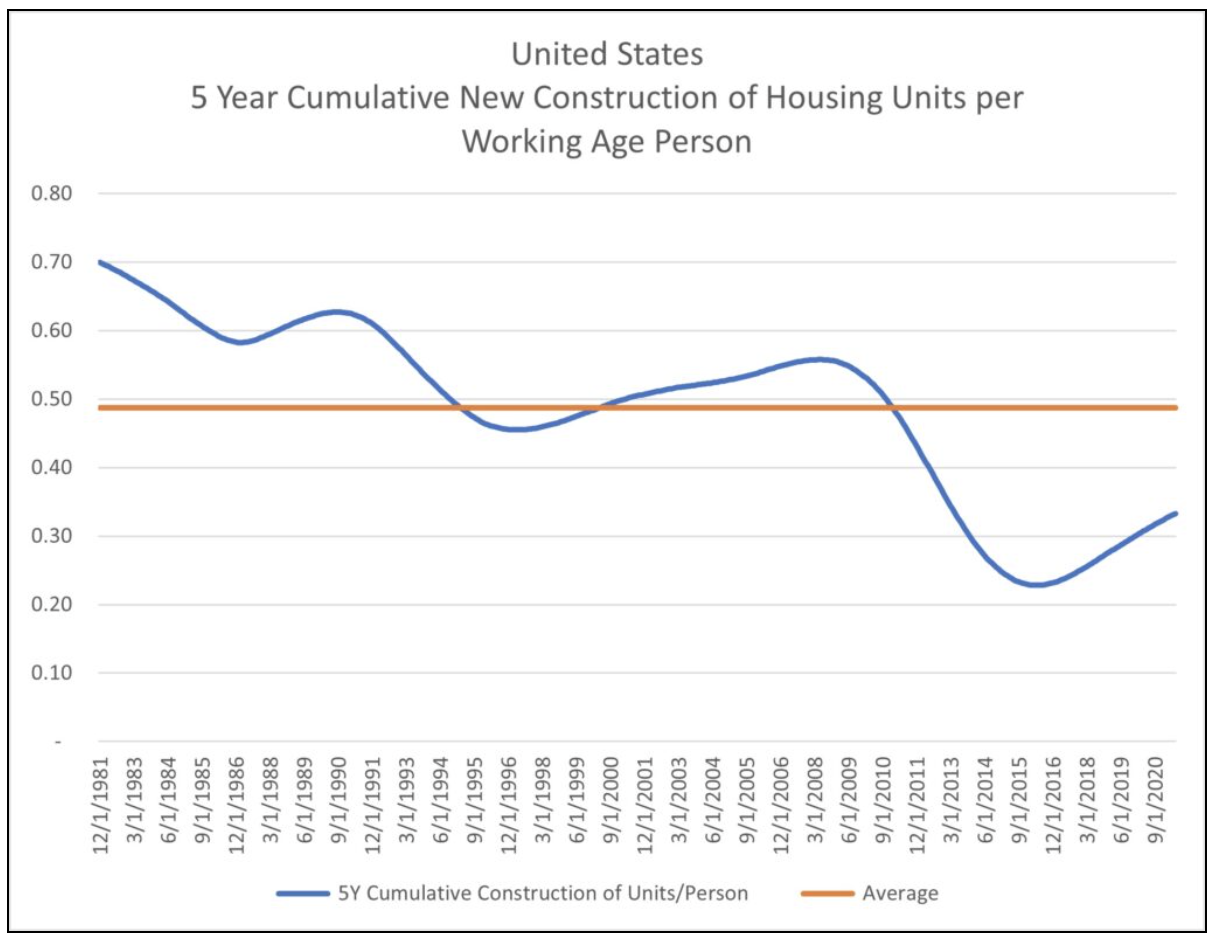 Another interesting wrinkle is that US homebuilding stocks, which have been in the penalty box for the last decade currently sport a price to earnings ratio of just 8.8x, which is below the historical average for the group and about 1/3 the valuation of the S&P 500 as a whole. 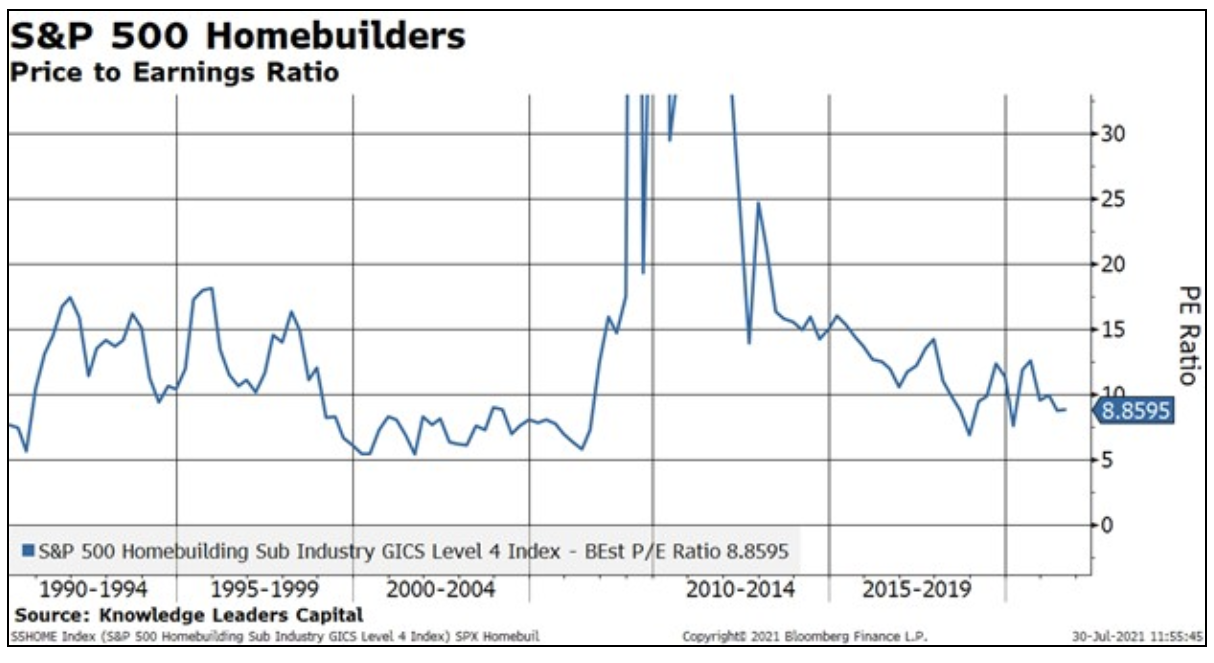