What Does Biden Imply for Gold?

America has elected a new President. It was a close race, but Joe Biden eventually won and he will be inaugurated and take office in the White House on January 20. The price of gold rose initially in the aftermath of the elections, only to plunge on the news regarding Pfizer’s vaccine breakthrough, as the chart below shows. This is what we know. 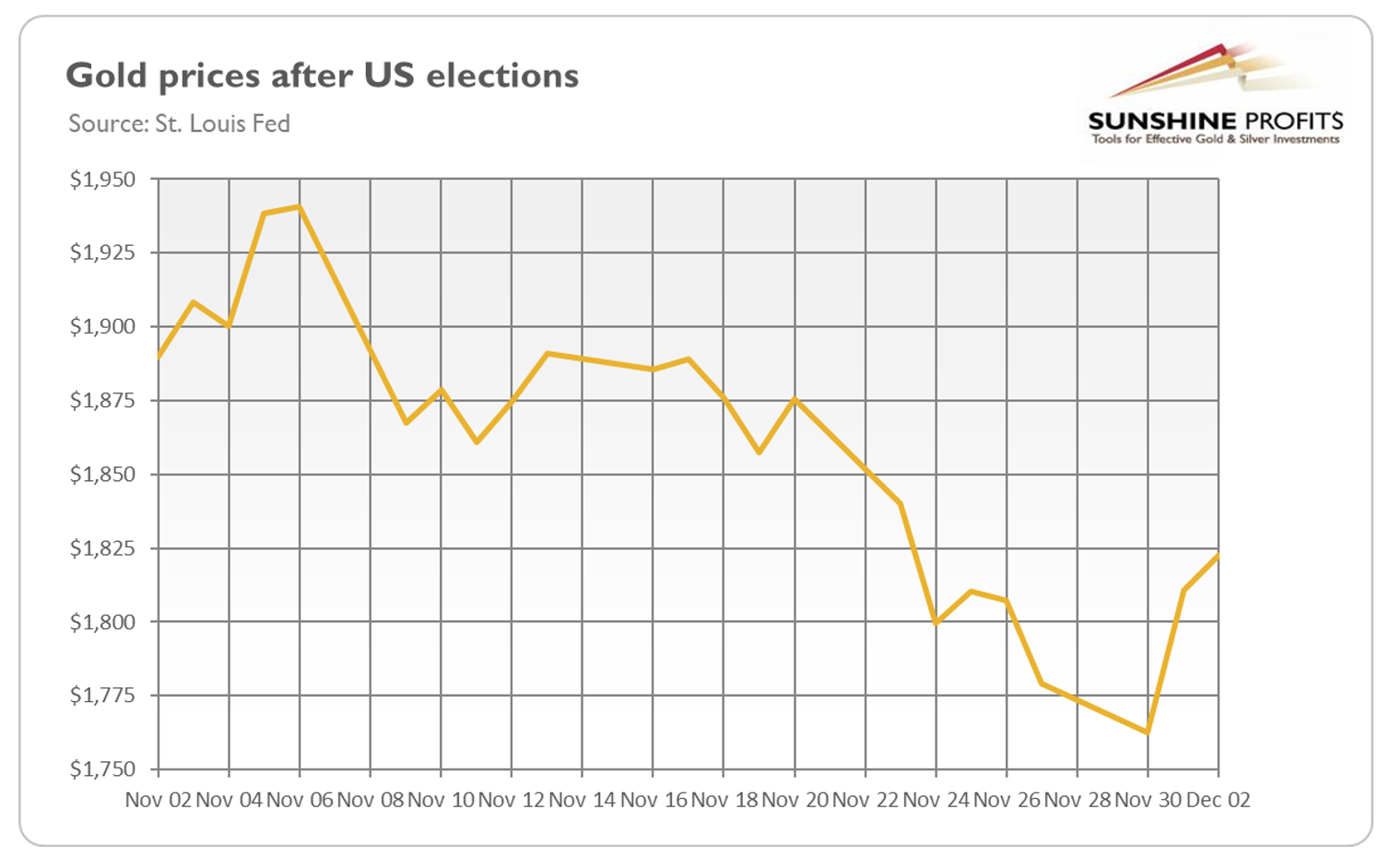 But what’s next for the price of gold? What does a Biden presidency mean for the yellow metal? To answer these vital questions, we will analyze the agenda of the President-elect. On the official Biden-Harris Presidential Transition website , we found that the new administration has four priorities: COVID-19, economic recovery, racial equity, and climate change .

The first issue obviously concerns the pandemic . While Trump remained relatively indecisive as to whether to fight aggressively with the coronavirus or to downplay the threat – which I believe cost him the votes of the elderly and ultimately a second term – Biden seems to be determined to beat the epidemic . He has acknowledged the challenge and promised to listen to science and health professionals, although it remains to be seen whether he will actually do so. Regardless, Biden has a seven-point plan to combat the virus, of which the two most important points are: 1) to ensure all Americans have access to regular, reliable, and free testing; 2) to implement mask mandates nationwide by working with governors and mayors and by asking the American people to do what they do best: step up in a time of crisis.

Boosting testing rates is a great idea. Quick and widespread testing, combined with contact tracing, is believed by many epidemiologists to be the best idea in combatting the virus. The mask mandates, although controversial from the libertarian point of view, could also importantly reduce transmission of COVID-19. Also important is what the plan does not mention. By this I mean the lack of any references to a lockdown. Therefore, Biden’s determination to beat the virus without resorting to a lockdown, is rather negative for gold prices.

The second priority is economic recovery. The most important points of Biden’s agenda concern building more modern infrastructure, which implies higher government spending. Importantly, Biden plans to partially fund these expenditures by reversing some of Trump’s tax cuts for corporations. Moreover, Biden plans to reform the labor market. He proposes more than doubling the minimum wage, raising it from $7.25 to $15 an hour. He also wants to make it easier for workers to organize unions, and to implement universal paid sick days and 12 weeks of paid family and medical leave. Widening access to affordable health care is also a stated goal.

From the economic point of view, such bold reforms in the labor market that would increase labor costs are not the best idea during an economic recovery, when many small and medium entrepreneurs are still struggling to survive in the market. Reversal of tax cuts would also not be welcomed by Wall Street and corporate America. So, Biden’s economic agenda could benefit gold somewhat , especially if higher infrastructure spending is financed by large fiscal deficits and if it further increases public debt.

However, a lot depends on the narrative adopted by market participants. If investors focus not on the rising public debt, but on the revival of infrastructure and economic recovery, then gold may struggle. However, I believe that in the current macroeconomic environment of low real interest rates , rising public debt and risk of higher inflation in the future, gold should perform satisfactorily.

The third priority of racial equity is described in a somewhat vague manner, which takes the form of postulates rather than specific points. The agenda definitely includes police reform legislation to reduce racial disparities within the criminal justice system. The push for greater racial equity shouldn’t impact gold prices significantly.

And finally, Biden also wants to deal with climate change by investing in green infrastructure, and hoping to achieve a carbon pollution-free power sector by 2035 and net-zero emissions, economy-wide, by no later than 2050. This plan is bold and if the new administration focuses too much on the environment, it could easily burden the private sector with regulations and hamper economic growth. So, this can be positive for gold prices, especially when combined with fresh fiscal stimulus, higher government spending, and ballooning federal debt .

To sum up, Biden’s presidency could be somewhat positive for gold prices due to higher government spending and anti-corporate points like the reversal of Trump’s tax cuts and increasing labor costs (raising the minimum wage, etc.). However, Biden’s impact on the gold market is likely to be smaller than previously thought by many analysts. This is because Republicans may remain in control of the Senate (if they win at least one of two seats in Georgia’s runoff in January), with power to block the most radical ideas of the new administration.

Moreover, the Republicans performed above expectations in the elections, gaining seats in the House and almost retaining the White House. It clearly shows that voters do not support the most progressive elements of the Democrats’ agenda. Biden is, therefore, likely to govern more as a centrist rather than a radical leftist, which is positive for the economy, but bad news for gold prices . Nevertheless, investors shouldn’t overestimate the power of the President over the economy. It means that gold’s bull market can continue under Biden’s presidency, unless the macroeconomic outlook changes abruptly and the real interest rates start to rise.