Will There Be Roaring Twenties for Gold?

The United States is strongly polarized, with blue versus red, liberals versus conservatives, and so on. People are divided along many lines, but the biggest division line is between those who count decades from 0 to 9 and those who count them from 1 to 10. It is intuitive for many people to adopt the first method, especially that we think of decades as ‘the 20s’, ‘the 30s’, and so on. However, the catch is that there was no Year Zero, so the first decade of the common era was years 1 to 10. Following this logic, the current decade started on January 1, 2021, not January 1, 2020.

So, I feel fully entitled to investigate how gold will behave in the new decade. The issue is especially interesting as some analysts claim that we are entering the Roaring Twenties 2.0. Are they correct?

On the surface, there are some similarities. The 1920s were a decade that followed the nightmare of World War I and the Spanish Flu pandemic . It was a time of quick economic growth (the U.S. GDP grew more than 40 percent in that period) and rapid technological innovation fueled predominantly by the rising access to electricity and big improvements in transportation (automobiles and planes).

Fast forward one century and we land in the 2020s, which is a decade following the nightmare of the coronavirus pandemic . There are hopes for an acceleration in technological progress driven mainly by the rising scope of remote work, digital solutions, cloud computing, artificial intelligence, Internet of Things, 5G networks, robotization, super-batteries, electric vehicles, and so on. And given the pent-up demand and months spent in lockdowns, consumers are ready to congregate and spend!

However, there are good reasons to be skeptical about the narrative of the Roaring Twenties 2.0 . The era of post-war prosperity was fueled by the return to the normalcy in the sphere of economic policy. I refer here to the fact that after WWI, there was a successful transition from a wartime economy to a peacetime economy. In contrast, in the aftermath of the Great Recession , there is a gradual transition from the peacetime economy to a wartime economy, that was only accelerated during the epidemic and the Great Lockdown .

In particular, both the government spending and the fiscal deficits were sharply reduced in the post-war era. In consequence, the U.S. public debt declined, especially in real terms. Similarly, the Fed reversed its monetary policy and allowed for monetary contraction (and quick recession) in 1919-20 to reverse wartime inflation .

In other words, the tighter monetary and fiscal policies led to an environment of economic prosperity. Also helpful for the U.S. were developments such as trustbusting and an economic recovery in Germany after its hyperinflation – all developments that will not replay in the 2020s.

In contrast, neither the fiscal policy nor the monetary policy are going to normalize anytime soon , even if the COVID-19 pandemic is brought under control. The national debt has risen by almost $7.8 trillion under Trump’s presidency – a level that rivals Italy’s. The debt-to-GDP ratio has soared, as the chart below shows. And Joe Biden doesn’t worry about deficits – instead, with his plan of $1.9 trillion economic stimulus, he is going to balloon the public debt even further by increasing government spending. 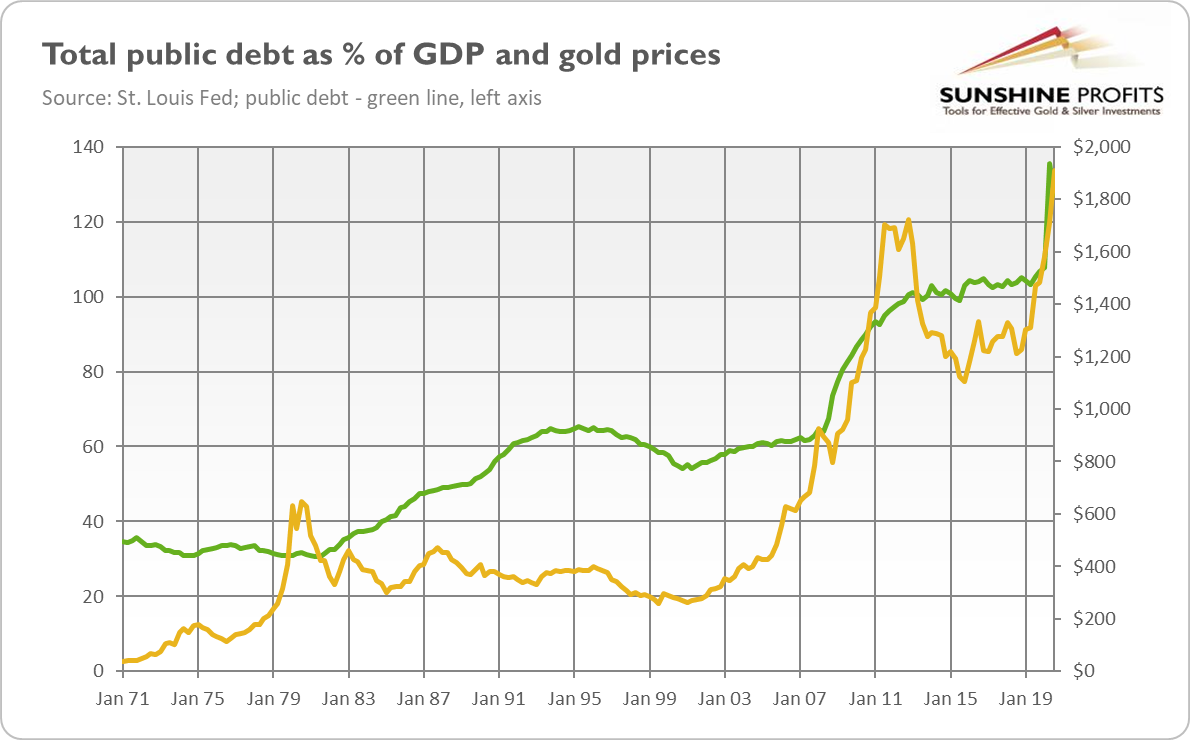 But maybe we shouldn’t worry about the debt? After all, after WW2, the public debt was even higher, but the economy didn’t collapse – actually, it grew so rapidly that the debt-to-GDP ratio diminished significantly. Yup, that’s correct, but after the pandemic, the economy will not recover as quickly as in the aftermath of WW2. Oh, and by the way, the economy grew its way out of debt only thanks to several years of high inflation .

Therefore, the current complacency and naïve belief in low- interest rates and debt-driven economic recovery makes the scenario of the Roaring Twenties 2.0 not very likely, despite all the fantastic technological progress we are observing. So, instead of acceleration, we could rather observe an economic slowdown due to the poor economic policy that hampers the expansion of the private sector. Indeed, the recent report by the World Bank warns about the lost decade: “If history is any guide, unless there are substantial and effective reforms, the global economy is heading for a decade of disappointing growth outcomes.” This is good news for the gold market.

But even if the Roaring Twenties 2.0 do happen, it wouldn’t have to be very bad for the yellow metal. It’s true that the 1920s was a period of wealth, prosperity, and decadence in which people didn’t think about preserving capital and investing in safe-haven assets such as gold. In contrast, there was a lot of risk-taking fueling the boom in the stock market. However, the Roaring Twenties were an inflationary period of debt-driven growth that ended in the systemic economic crisis called the Great Depression – and gold can shine in such an macroeconomic environment .