Powell’s testimony to Congress failed in generating a rebound in gold prices; thus, the bearish trend could continue.

On Tuesday (June 22) the Fed Chair testified before the Select Subcommittee on the Coronavirus Crisis, U.S. House of Representatives . Before Powell’s appearance in Congress, there were some hopes that he would soften the Fed’s hawkish signals from the previous week. However, these hopes only partially materialized.

This is because Powell’s testimony was basically a confirmation of the last FOMC meeting . In particular, he reiterated the view that higher inflation would be transitory, as “a substantial part or perhaps all of the overshoot in inflation are from categories directly affected by reopening.”

Actually, some of his remarks were quite hawkish , as he said that the price pressures “don't speak to a broadly tight economy, but these effects have been larger and may persist longer than expected”. The admission that strong inflationary pressure could last longer than expected suggests that Powell is more worried about inflation than several months ago. He even explicitly admitted that “5% inflation is not acceptable.”

Luckily for the gold bulls, there were also some dovish comments . In particular, Powell said that the Fed wouldn’t hike the federal funds rates too quickly based only on inflationary worries:

We will not raise interest rates preemptively because we fear the possible onset of inflation. We will wait for evidence of actual inflation or other imbalances.

Of course, it doesn’t make any sense, as actual inflation is already 5%, more than twice the target, and the Fed hasn’t reacted. The US central bank remains passive because it believes that inflation will prove to be transitory. However, it means that it actually acts based on expectations, not the current data, contrary to what the Fed is saying when justifying its ultra-dovish stance.

And Atlanta Fed President Raphael Bostic also sent some dovish signals in an interview with National Public Radio’s Morning Edition he gave the next day after Powell’s testimony. He adhered to the view about temporary inflation, but he explained that the time horizon of this temporariness would be longer than previously thought:

The recent jump in prices will prove temporary, but "temporary is going to be a little longer than we expected initially... Rather than it being two to three months it may be six to nine months.

However, Bostic didn’t mention the necessity to hike in the face of prolonged high inflation. On the contrary, he pointed out that the Fed shouldn’t announce the victory in the jobs battle too quickly: “We have to make sure our policies don't pivot in ways that make it look like we are declaring victory prematurely.”

What does all this mean for the yellow metal? Well,  theoretically, more lasting high inflation with unchanged dovish stance of the US central bank s hould be positive for gold prices , as an unresponsive Fed implies lower real interest rates , which usually support the yellow metal.

However, gold hardly reacted to either Powell’s or Bostic’s comments . As the chart below shows, contrary to some hopes, Powell’s testimony failed in sending strong dovish signals that would be able to overwrite the hawkish turmoil triggered by the recent dot-plot . So, there was no rebound in gold prices. Instead, the price of the yellow metal merely stabilized at about $1,775. 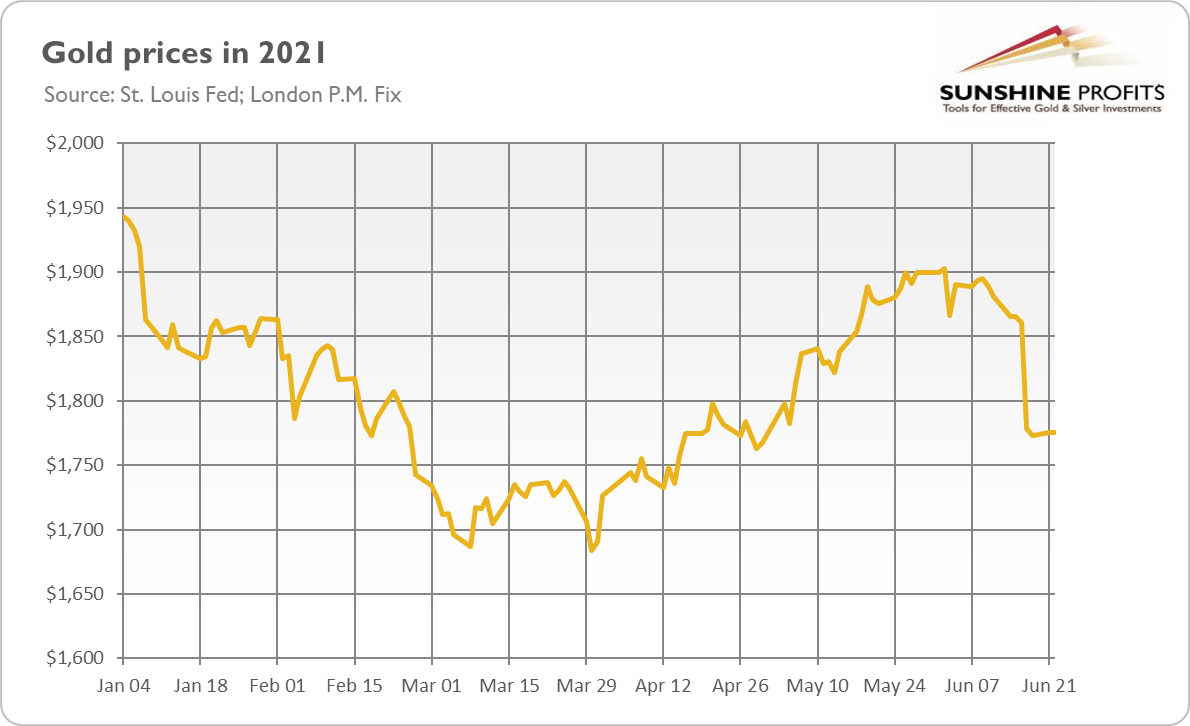 The lack of any rebound is a bad sign, indicating gold’s weakness (especially given that some other assets rebounded a bit this week after the post-FOMC turmoil ). This suggests that gold prices have room for further declines. It seems that gold would need a very dovish surprise from the Fed to go the other way, which is not likely without some kind of economic crisis or at least an influx of significantly negative economic data.