With the CPI annual inflation rate spiking 5% in May, gold could have gained a lot in response. However, it rallied only $20. Should we prepare for more?

Whoa! Inflation soared 5% in May – quite a lot for a nonexistent (or transitory) phenomenon! But let’s start from the beginning. The CPI rose 0.6% in May, after increasing 0.8% in April. Meanwhile, the core CPI, which excludes food and energy, soared 0.7%, following a 0.9% jump in April. So, given that the pace of the monthly inflation rate decelerated, we shouldn’t worry about inflation, right? Well… we should.

First of all, inflation was higher than expected , as the consensus forecast was a 0.4% increase. Inflation surprised pundits once again, but not me. Last month, I wrote in the Fundamental Gold Report that “Inflation escalated in April. In May, however, inflation could be softer, but it will remain relatively elevated, in my view” – and this is exactly what happened. However, the unexpected rise in inflation is positive news for gold, as such a surprise should decrease the real interest rates .

Second, pundits cannot blame energy prices for this jump, as the energy index was flat. Apart from energy and medical care services, which decreased slightly, all index components increased last month. In particular, the index for used cars and trucks soared again (7.3%). Also, the indexes for new vehicles and apparel surged in May, which shows that inflationary pressure is broad-based .

Last but definitely not least, the latest BLS report on inflation reveals that the overall CPI skyrocketed 5% for the 12 months ending May (before seasonal adjustment), followed by a 4.2% spike in April. For context, the annual inflation rate has been trending up every month since January, when the 12-month change was just 1.4%. Therefore, we’ve just seen the largest move since a 5.4% jump for the period ending in August 2008 , just one month before the bankruptcy of Lehman Brothers that triggered the global financial crisis and deflationary Great Recession .

But that’s not all! The annual core CPI rate soared 3.8% last month after rising 3% in April, as the chart below shows. It was the fastest pace since June 1992. So, the Fed cannot by any manner of means blame higher inflation on food or energy prices. 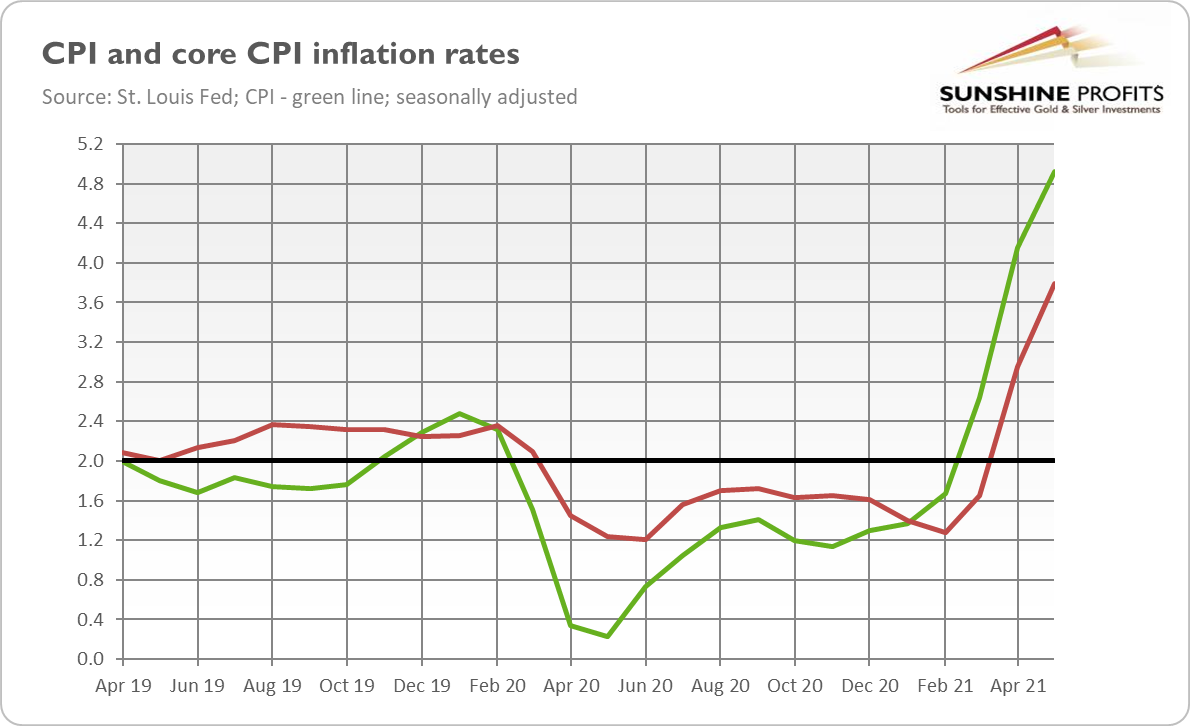 Supply disruptions are not a credible explanation either, as the inflation acceleration is broad-based. How likely would it be, that the production of virtually all goods and services would face supply bottlenecks at the same time and extent? Indeed, a significant boost in the broad money supply is a much more convenient explanation for widespread price increases.

What does accelerating inflation imply for the gold market? Well, on the one hand, higher inflation should be positive for the yellow metal , as it means a stronger demand for gold as an inflation hedge . Additionally, higher inflation could lower the real interest rates, also supporting gold prices. And indeed, the price of gold has risen from about $1,870 to $1,890 in a response to the inflation spike.

On the other hand, some analysts point out that stronger inflation could be rather negative for the yellow metal, as the Fed would have to tighten its monetary policy, taper its quantitative easing and hike the federal funds rate to contain inflation. After all, the overall CPI annual rate is more than twice as high as the Fed’s target. Moreover, the mediocre gold’s reaction to the surge in inflation suggests that investors are worried about a normalization of the ultra-dovish monetary policy .

However, the Fed has recently become more tolerant of higher inflation, and Powell is likely to continue claiming that inflation is merely transitory. Also, on Thursday, the European Central Bank held its regular monetary policy meeting and maintained its elevated flow of stimulus, even though recovery takes hold. And the Fed may do the same, i.e., nothing, tomorrow.

Nevertheless, the relaxed stance of the ECB and the Fed could come out as incorrect. We have the economy operating above potential, with big fiscal injections along with a very easy monetary policy. Such a combination could bring us to an environment of higher and more lasting inflation, which could disrupt the market later in the future.

After all, many indicators suggest that financial markets believe in the narrative of “transitory” inflation. But if inflation proves to be more permanent than expected, there could be some turmoil in the markets – and gold could benefit from it. Gold is not always a good inflation hedge, and it could suffer somewhat if the nominal interest rates increase; however, it should prosper if the real interest rates decline further.