Gold About To Spring As Stocks Cool Off At Highs

Stock bulls aren‘t yielding an inch of ground, and technically they have precious few reasons for doing so. It‘s still strong the stock market bull, and standing in its way isn‘t really advisable. With the S&P 500 at new highs, and the anticipated slowdown in gains over Friday, where is the momentary balance of forces? As the proverbial rubber bands gets pushed upwards still, what about those rising probabilities of seeing at least a short-term pause in the stellar pace of gains since last Monday?

Gold did recover on Friday, and didn‘t disappoint after Thursday‘s slide. The weak non-farm employment data certainly helped, sending the dollar bulls packing. It‘s my view that we‘re on the way to making another dollar top, after which much lower greenback values would follow. Given the currently still prevailing negative correlation between the fiat currency and its shiny nemesis, that would also take the short-term pressure of the monetary metal(s).

Let‘s dive into the charts (all courtesy of www.stockcharts.com). 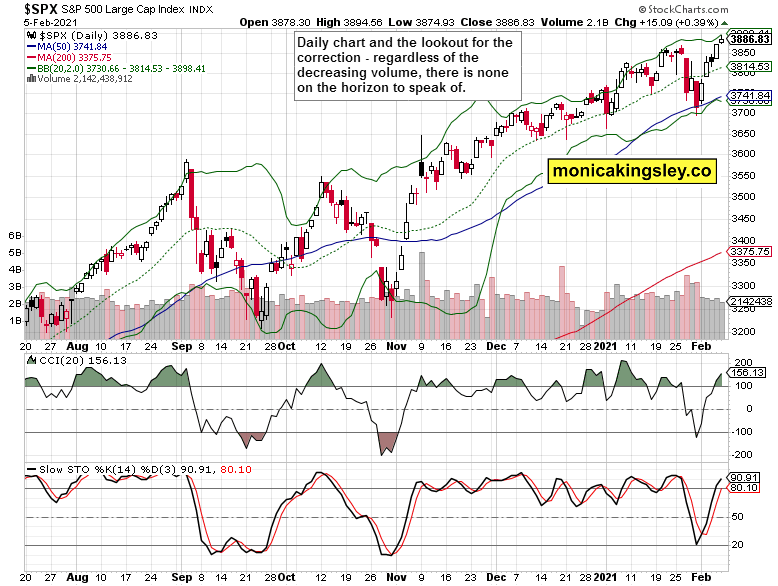 Stocks keep pushing higher, and the bulls are strong regardless of the little contraction in the daily volume. The daily indicators attest to the strength of the uptrend, but the pace of daily increases looks set to slow down as minimum though. 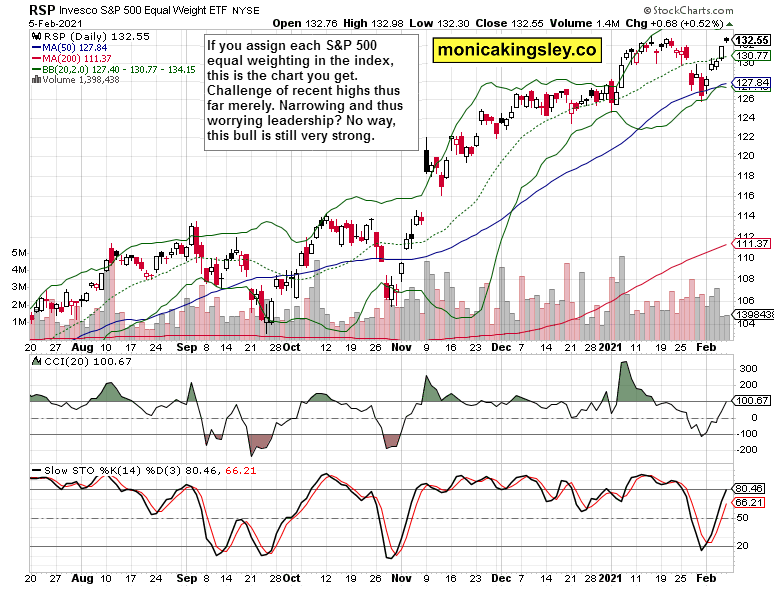 Imagine that all the constituent shares in the S&P 500 had equal weight (i.e. forget about $NYFANG) – this is the chart you get. RSP ETF is only now challenging its highs, which is however not a disappointment or a red light flashing divergence at all. The march to new highs in the S&P 500 still looks satisfactorily broad based. 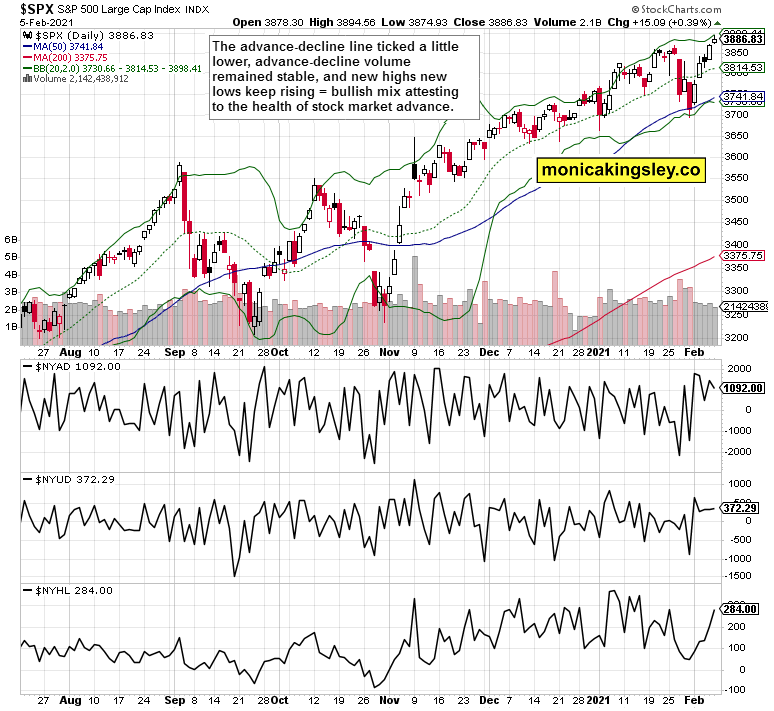 Market breadth confirms that very clearly. Both the advance-decline line and advance-decline volume aren‘t disappointing in the least, and new highs new lows have made a strong comeback from preceding setback. The intermediate picture is one of strength. 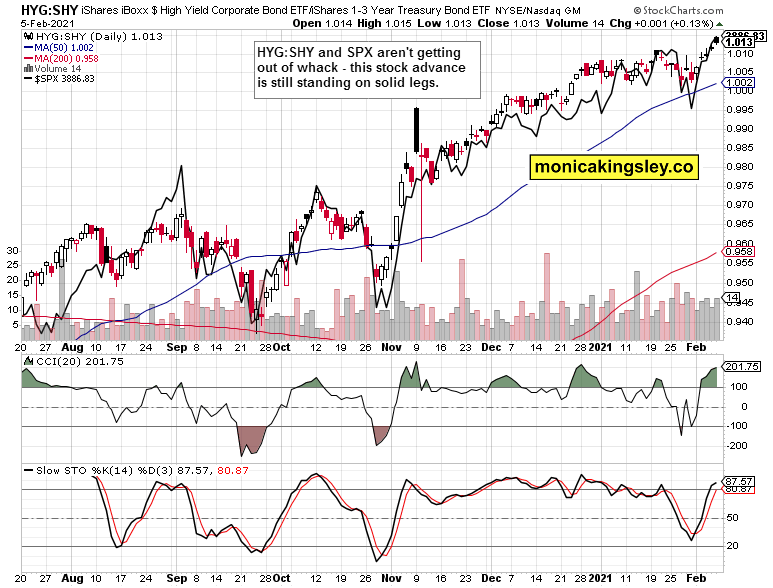 High yield corporate bonds to short-term Treasuries (HYG:SHY) ratio with S&P 500 overlaid (black line) shows that the two are tracking each other tightly in recent days. Stocks haven‘t yet yielded in their attempt at taking leadership position, regardless of their performance since the start of November (which makes the attempt suspect in the very short-term, as stocks have lagged a little relative to the credit markets back then). Bearish prospects? No way, dips are still to be bought. 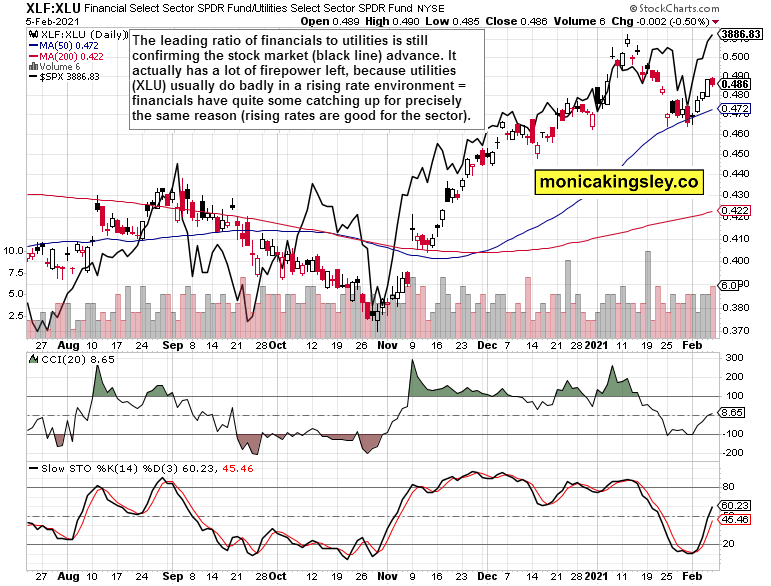 The financials to utilities (XLF:XLU) ratio still broadly supports the stock market advance. Looking at the bond market dynamics, I expect utilities to remain under pressure while financials would gain faster. I‘m not worried by the current relatively depressed ratio‘s value, and don‘t consider it a warning sign for the S&P 500 in the least. 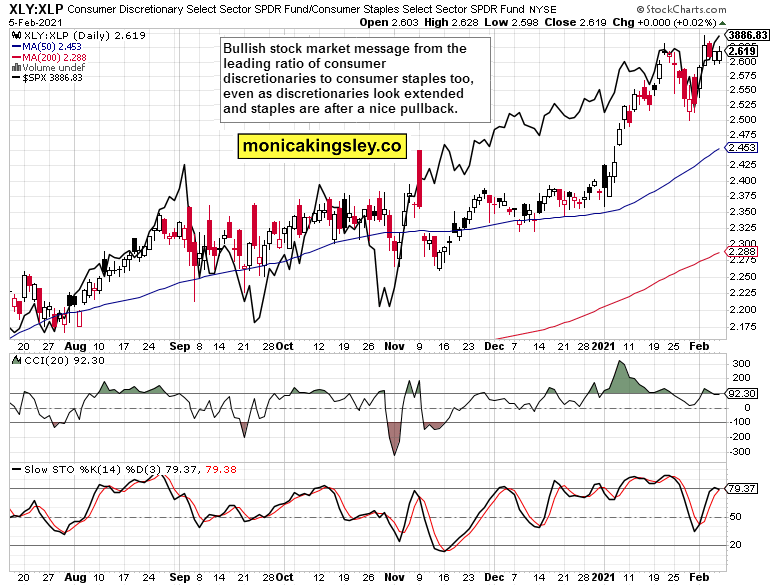 Consumer discretionaries to consumer staples (XLY:XLP) is another leading ratio worth watching. It‘s currently at quite elevated levels, as I view the discretionaries as extended while the staples have undergone an appealing pullback. Even though that makes for short-term headwinds in the ratio, it‘s still primed to support the stock market bulls. 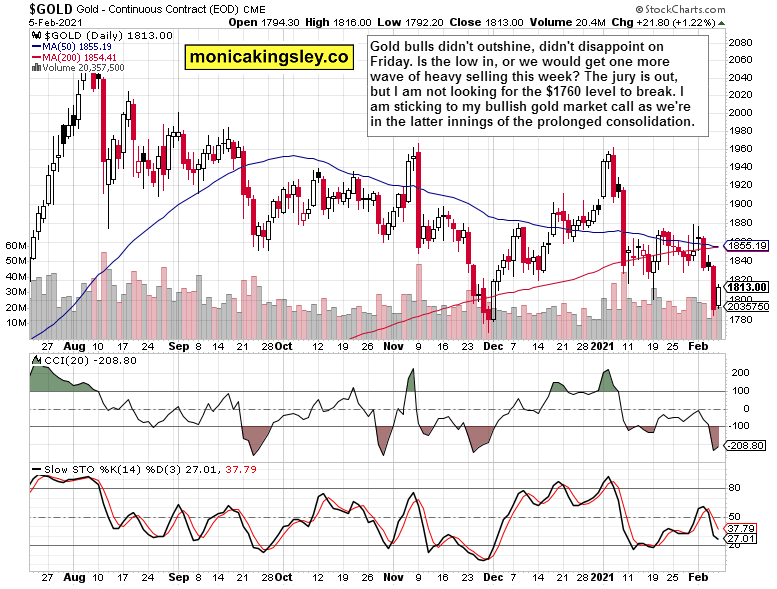 Friday‘s gold session still is cause enough for optimism among the gold bulls about an important low being made. The other option would be a brief dip below Thursday‘s lows, which I however due to more powerful $USD reversal on Friday (erasing all Thursday‘s gains on the heels of poor non-farm payrolls data), don‘t look at as the more likely scenario currently.

For now, it still remains most probable that Thursday‘s bottom in gold won‘t be overcome by much, not going down to more than $1760 (though I am obviously not betting all in my trading plans on this strong support) – if at all. It‘s the „if at all“ part that I subscribe to most heavily. 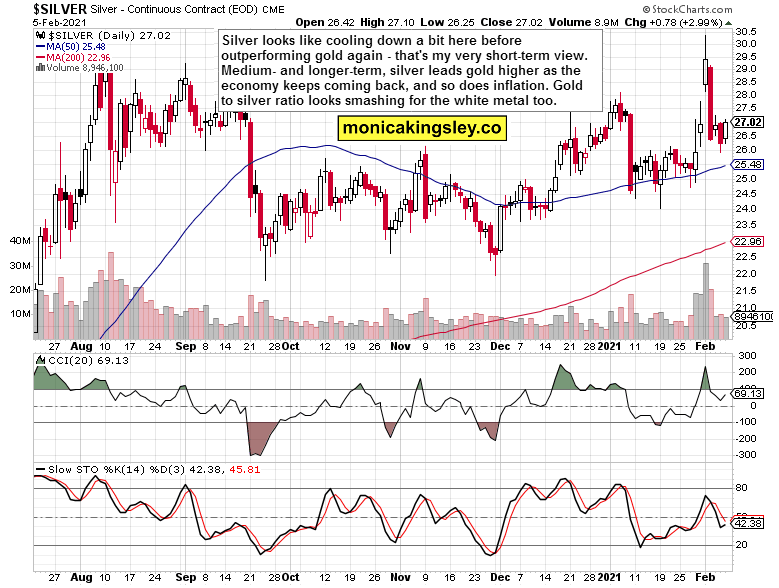 Silver‘s chart is the livelier one, less under pressure but given the recent squeeze-driven run, the white metal might need to cool down a bit here. The 1H real economy recovery outlook is though guaranteed to put a solid floor below any sub $26 dip should that – which is as questionable as in case of gold – happen at all. Base building at roughly current levels would be a healthy development for the bulls to rejoice. 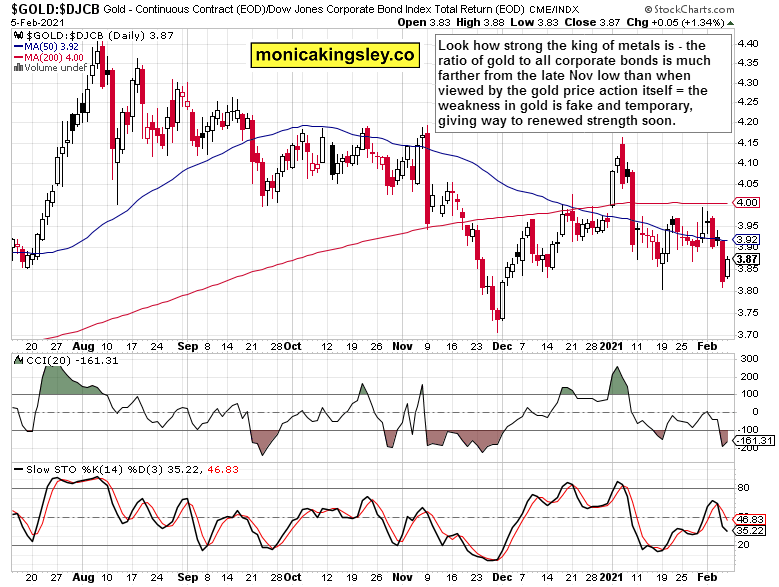 Checking out on the gold to all corporate bonds ($GOLD:$DJCB) ratio reveals relative strength in the yellow metal currently. It‘s trading much farther above its late Nov low than the metal itself. Similarly to the case junior miners to senior ones are making, this is a hidden sign of strength in the precious metals sector, whose next upleg is knocking on door. 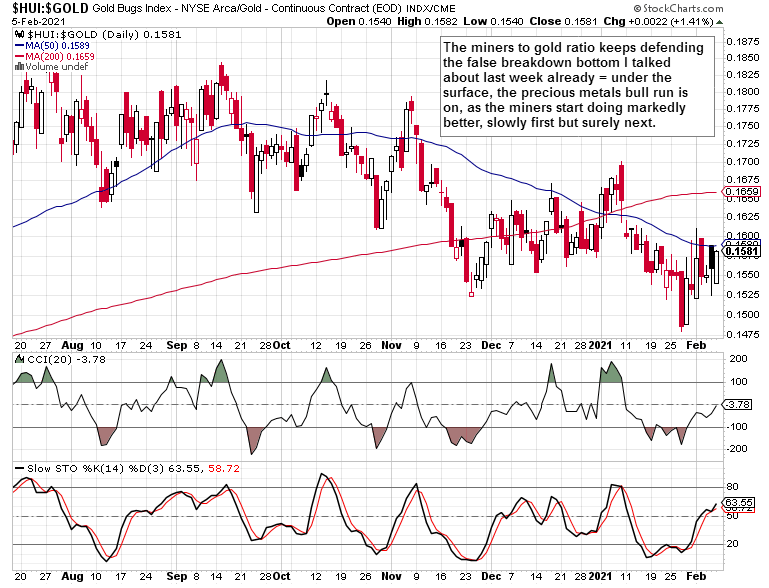 The miners to gold ($HUI:$GOLD) ratio‘s false breakdown announcing another upleg that I discussed on Feb 01 already, is still intact, and sending the very same signals of internal strength inside the precious metals complex. The 1H 2021 future is bright, and approaching fast.

The stock market keeps powering higher, and despite the rather clear skies ahead, a bit of short-term caution given the speed of the recovery and its internals presented, is in place. I wouldn‘t be surprised to see today or tomorrow a brief and weak whiff of lower prices – nothing to call home about if you were a bear, that is.

The gold and silver bulls apprear to be staging a return, slowly but surely, which is consistent with the price damage repair pattern frequently experienced after sizable red candles that felt to at least part of the marketplace as out of the left field. The case for the next upleg remains as strong as it has ever been in my view.

Related: More Than a Snapback Rally in Gold As Stocks Keep Marching