Fed to Taper This Year: What Are the Odds?

The latest FOMC minutes show that the Fed will likely taper quantitative easing this year. It’s largely priced in, but downside risks to gold remain.

Yesterday, the FOMC published minutes from its last meeting in July. The publication is rather hawkish, as it shows growing appetite among the Fed officials for tapering the quantitative easing as early as this year:

Looking ahead, most participants noted that, provided that the economy were to evolve broadly as they anticipated, they judged that it could be appropriate to start reducing the pace of asset purchases this year because they saw the Committee’s “substantial further progress” criterion as satisfied with respect to the price-stability goal and as close to being satisfied with respect to the maximum-employment goal.

The discussion about the tapering of the Fed’s asset purchases must have been the key point of July’s FOMC meeting, as it was reiterated later in the minutes with a similar conclusion:

Additionally, starting tapering sooner rather than later has several advantages, as it would help to manage the upward risk of the inflation outlook, giving the Fed the opportunity to hike the federal funds rate sooner, if needed. It would also allow the US central bank of a more gradual pace of tapering, reducing the risk of the taper tantrum:

Some participants suggested that it would be prudent for the Committee to prepare for starting to reduce its pace of asset purchases relatively soon, in light of the risk that the recent high inflation readings could prove to be more persistent than they had anticipated and because an earlier start to reducing asset purchases would most likely enable additions to securities holdings to be concluded before the Committee judged it appropriate to raise the federal funds rate.

What’s more, although FOMC participants decided that the economy had not yet achieved the Committee’s broad-based and inclusive maximum-employment goal, a majority of them stated that most of the negative factors which weighed on the employment growth would ease in the coming months, warranting the start of the tapering.

Last but not least, the Fed seemed to become more hawkish on inflation. The staff considered the risks of the inflation projection to be tilted to the upside, while FOMC members started to see it as potentially more persistent than previously believed:

Looking ahead, while participants generally expected inflation pressures to ease as the effect of these transitory factors dissipated, several participants remarked that larger-than-anticipated supply chain disruptions and increases in input costs could sustain upward pressure on prices into 2022.

It seems that someone at the Fed has finally noted that inflation had jumped above 5%, as the chart below shows! 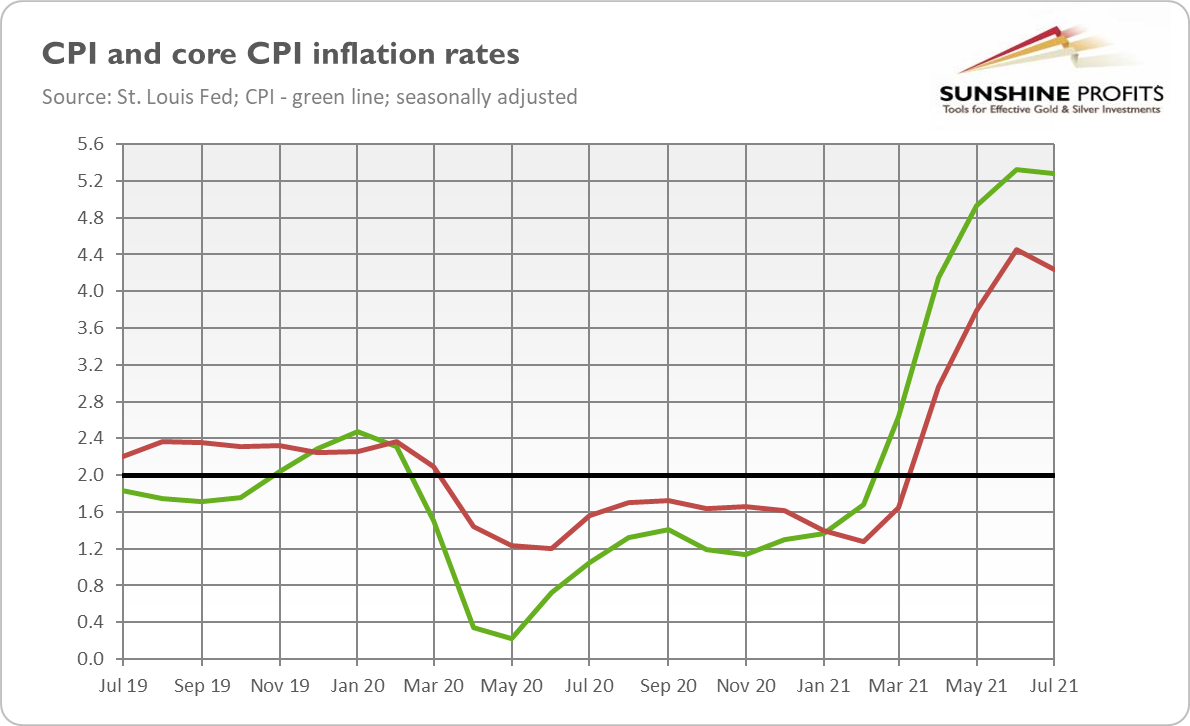 Of course, there were also dovish parts, in particular related to the possibility that the spread of the Delta variant of the coronavirus would hamper the economic growth, or that the slack in the labor market could be greater than commonly believed. Thus, several participants emphasized that the Fed should be patient with tapering and that it would be better to start it early next year:

Several others indicated, however, that a reduction in the pace of asset purchases was more likely to become appropriate early next year because they saw prevailing conditions in the labor market as not being close to meeting the Committee’s “substantial further progress” standard or because of uncertainty about the degree of progress toward the price-stability goal (…) Those participants stressed that the Committee should be patient in assessing progress toward its goals and in announcing changes to its plans on asset purchases

What do the recent FOMC minutes imply for the gold market? Well, they came in, on balance, hawkish, so they should be negative for the yellow metal. However, the initial reaction was bullish. Perhaps investors were afraid that the minutes would be even more hawkish. The decline in equities could also fuel some safe-haven demand for gold. It’s worth noting that the reaction was rather muted, as the publication didn’t offer any groundbreaking revelations. It seems that next week’s annual Jackson Hole conference could provide more clues about the future US monetary policy.

Having said that, the minutes clearly show that tapering is coming. The Fed could announce it as early as in September, as Dallas Fed President Robert Kaplan prefers, and start it later this year. So, precious metals investors should brace for the inevitable. Luckily, the Fed’s tightening cycle is largely priced in, but any unexpected acceleration in the pace of the monetary policy normalization could rattle the gold market.