Since its peak in the spring of 2020, the U.S. dollar index has lost almost 12 percent, and it could decline even further, thus supporting gold prices.

There is a weakness in the U.S. dollar. Let’s start off by taking a look at the chart below. As you can see, the broad trade-weighted dollar index has been declining recently. Since its peak in late March 2020, the greenback has lost almost 12 percent. 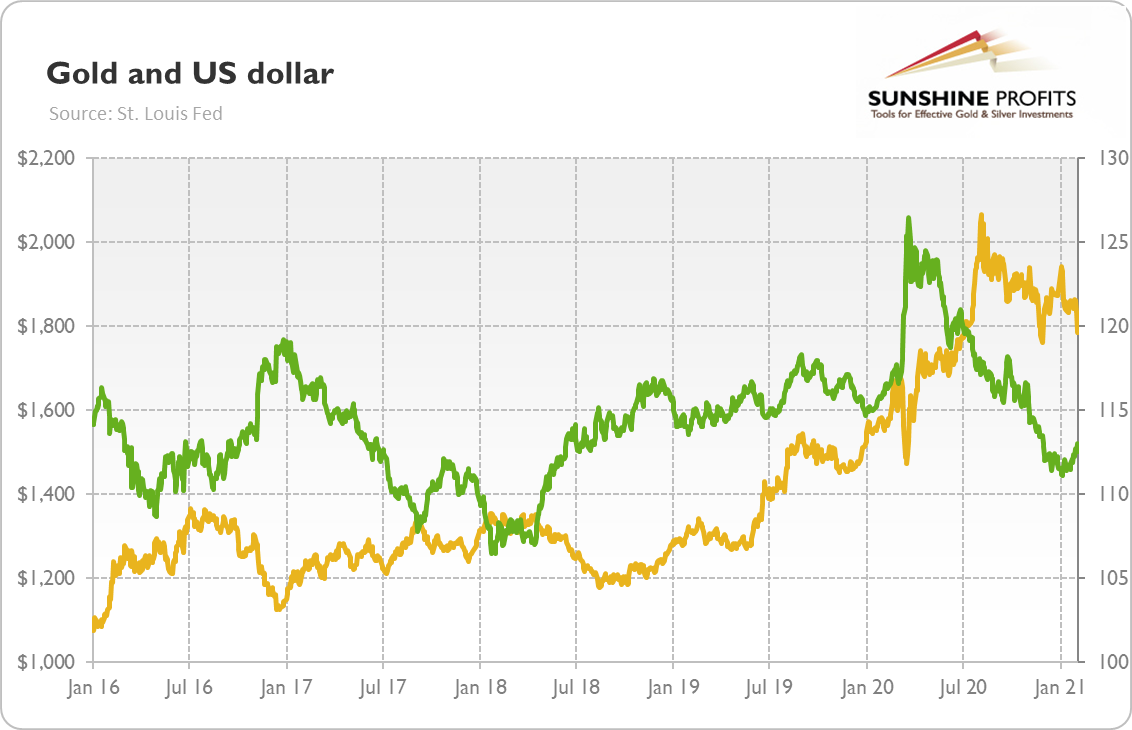 Not surprisingly, some analysts argue that the American currency has entered a multi-year bear market , with more declines on the horizon. Are they right? And what would that imply for gold?

Well, there are strong arguments for the bearish performance of the greenback . The confidence in the U.S. dollar is waning . To be clear, I don’t predict the collapse in the greenback anytime soon. I’ve been hearing the rumors about the dollar’s death for years – and they are often exaggerated. The truth is that the greenback remains the least ugly sister of the fiat currencies . And it’s dominance is overwhelming: the U.S. dollar’s share of currency reserves reported to the IMF was 60.4 percent in Q3 of 2020, while the share of the euro , the second most important reserve currency, was only 20.5 percent.

However, the share of the U.S. dollar has declined from 64.7 percent in the first quarter of 2017. It seems that Trump’s trade sanctions and ambiguous stance towards U.S. allies have pushed them to reduce their exposure to the American currency. No one wins trade and currency wars . In addition, in October 2020, the greenback ceased to be the world’s most used global payments currency , falling behind the euro for the first time since August 2013 .

And the recent update to Tesla’s investment policy, which enables Musk’s firm to hold part of its cash holdings in cryptocurrencies and gold, is a clear sign the big companies are losing some confidence they previously had in the U.S. dollar. Indeed, sentiment is clearly bearish , as bets against the dollar have recently risen to nearly their highest level in a decade.

The negative sentiment may of course, be excessive, especially given the fact that the American economy would probably, as always, recover quicker than its European and Japanese peers. However, there are important headwinds against the buck . First of all, the Fed aggressively slashed interest rates and expanded its balance sheet , thus having its monetary policy resemble the ridiculously dovish stance of the ECB and the Bank of Japan . The U.S. central bank also become more tolerant toward higher inflation , so it’s going to leave the federal funds rate at or near zero for years.

Second, the Fed’s recent dovishness is accompanied with the expansion of the fiscal deficits . The explosion in the U.S. debt and in the broad money supply has significantly increased the supply of dollars, making their value decline. The lavish fiscal policy not only ballooned the public debt , but it also contributed to the large twin deficits , i.e., the simultaneous fiscal deficits and the nation’s current account deficits. As a reminder, the twin deficit that President Bush triggered in the 2000s reduced investors’ confidence in the American economy and its currency. Hence, it contributed to the bull market in gold .

And the same may occur this time. After all, a twin deficit means that more dollars are being printed and moved abroad. In contrast, the EU runs a huge current account surplus, so there is an inflow to the euro through foreign trade.

Third, with an economic recovery from the pandemic , the risk appetite has been increasing. Such a “risk on” environment has been historically negative for the greenback, as capital flows into more risky emerging markets.

So, the black clouds over the dollar should be fundamentally positive for gold prices, as the yellow metal is often negatively correlated with the greenback. This is an important difference between 2011 and 2020. As the chart below shows, the American currency bottomed out in the summer of 2011, starting its multi-year bull market. 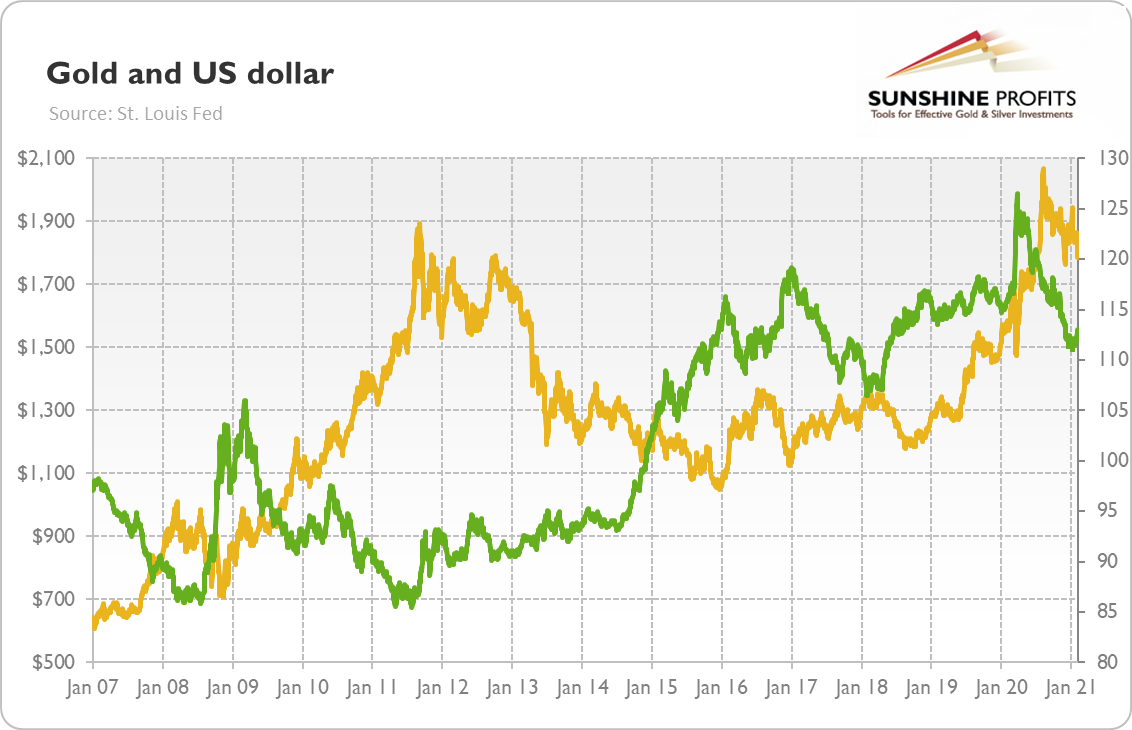 If this scenario replays, it would be, of course, bad for gold. But the above presented arguments show that the bull market in the U.S. dollar being similar to that of 2011-2020 is unlikely. And the euro doesn’t suffer from a similar crisis as it did in 2010-2012.

The bearish case for a dollar is also supported by the The Economist’s Big Mac Index , as only three currencies are now overvalued against the U.S. dollar, which suggests that there is more room for declines in the greenback’s value. Indeed, in 2009-2011, the American currency weakened more than 19 percent, while now it hasn’t weakened by even 12 percent! The continuation of the bear market in the U.S. dollar should be supportive for the yellow metal, especially if the weaker greenback will be accompanied by a slide in real interest rates .