There Is No Excuse to Not Respond to a Customer

Let me put it to you in the simplest terms possible. When your customer calls, emails or texts you, you must respond. That is unless you don’t care if they ever do business with you again. 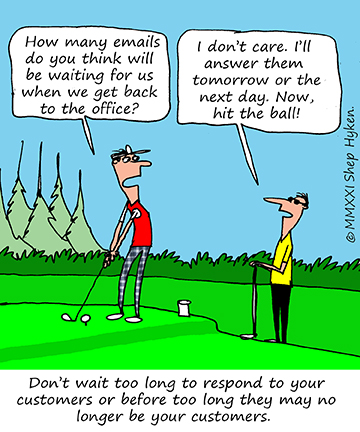 One of our subscribers to The Shepard Letter, Andy Saks, owner of Spark Presentations and professional corporate presenter, sent in a story worth sharing. (By the way, if you’ve got an amazing – or horrific – customer service story, send it over. I collect them and may include them in one of my articles or videos.) Here’s a short version of what happened.

Andy was interested in buying more life insurance, so he emailed the agent he had done business with in the past. He didn’t get a reply, so after several days he called the agent’s office. He explained to the receptionist that he’d reached out to him and nobody had responded. Her explanation was, “He was out that day and has been in a lot of meetings.”

Andy asked me, “Am I out of touch with reality? Should I have expected a quicker response? After all, I’m a client, a warm lead for new business, and I represent income to him. If he can’t respond the same day, if not the same hour or minute, then don’t you think someone from his organization should have been tasked with responding for him, rather than leaving me hanging for several days?”

It’s not that Andy is impatient. He mentioned that an auto-response from his email would have been acceptable for the day he was out. But to keep him waiting for days and forcing him to call was, for Andy, unacceptable. Especially with the excuse, he was given. In effect, he was chasing the agent down to give him more business. Usually, it’s the other way around.

Here’s the lesson: Fast response builds trust and confidence, shows you care and is respectful. It’s just the right thing to do. A slow response – or no response – sends the opposite messages and will work against you for future business. At best, you’ll have to work hard to overcome that Moment of Misery. At worst, your customer will move on and find someone who is more responsive.

There are two considerations for determining the speed of response times. First, decide what your minimum acceptable standards are for responding to calls, emails, and any other type of communication from your customers. It may be the same business day, by the next business day, or something much shorter. And two, determine the optimal best response time. One that would impress your customers.

Andy Saks shared his thoughts on this. “I’ve made quick responses a key tenet of my own business. I’ve found that responding within an hour to a lead shows, through my actions, that I care about them, distinguishes me immediately from other options, and helps build the trust that leads to business.”

It doesn’t matter if you’re in sales, service, or any other part of your organization, something as easy as a quick response time has so many benefits that add to the customer experience.

Related: Why You Need To Stop Comparing Yourself to Your Competitors