A Fictional Press Release Can Be a Great Motivator

I’ve been asked many times how to get the C-suite to invest in customer service. There are plenty of good answers. My go-to response has always been, “Show them the numbers.” The C-suite loves numbers. Prove that spending $100 will make the company $200, and you just may capture the attention of a decision-maker in the C-suite. 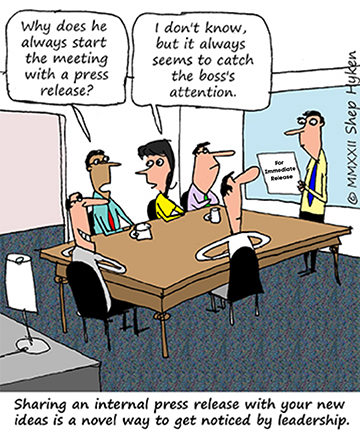 Now there is a new way to approach leadership with an idea, which is to write a Fictional Press Release.

The Fictional Press Release is probably not what you think it is. It’s not a fake release with fake news. The word fictional does not refer to the contents of the press release, but instead, to the idea that the press release will never be posted or published. It’s only to be seen by the people inside a company.

For example, you may have a new idea that’s important and beneficial for the company and/or its customers – and even its employees. One way to write it up to be considered by decision-makers is to create a press release. The traditional reason for a press release is attention. You want something to get noticed in a way that motivates the reader to take some form of action. Often, a typical press release is trying to promote or sell something, be it something of interest, such as late-breaking news or an actual product. In this case, it’s about introducing and promoting an idea. Why is it good? Why should it be implemented? And why should anyone spend money on it?

The Fictional Press Release is meant to create focus on the outcome of an idea. For example, maybe there is a piece of software you want to buy for your department. One way to get the financial decision-maker to say yes to investing in the software is to create a press release. Consider this title:

If I were the CFO and in charge of signing off on major expenses in a company, that headline might catch my eye. Follow that up with some attention-grabbing numbers. Maybe some stats and facts followed by a predicted ROI (return on investment). Those numbers need to make the case for an investment. If the company could save a million dollars by investing just $50,000 into new software, most executives would wonder, “Why didn’t we do this sooner?”

The Fictional Press Release can be used for other ideas as well. If you want to sell anyone in your company on any type of idea, consider not just writing it up, but writing it as a press release. This is a powerful way to create a summary of the idea, how much it will cost, the process, and most importantly, the benefit.