Workaholism Is About Emotional Pain, Not Money

Are you a workaholic, or are you someone who works hard at what you love to do? Does the distinction really matter?

As a recovering workaholic who loves what I do, I have to say that it does. Even though workaholism is generally considered a mark of success and rewarded with praise and pay raises, it is an addictive behavior that often has destructive consequences. In our co-authored book Facilitating Financial Health, Brad Klontz, Ted Klontz, and I include workaholism as a money disorder. Workaholics turn to work for relief from emotional pain in the same way alcoholics turn to alcohol or compulsive gamblers turn to gaming tables.

In a 2019 study of 2,000 employed Americans done for the Vision Council, 48% of respondents said they were workaholics.

The top 10 signs of a workaholic, according to the survey, are: 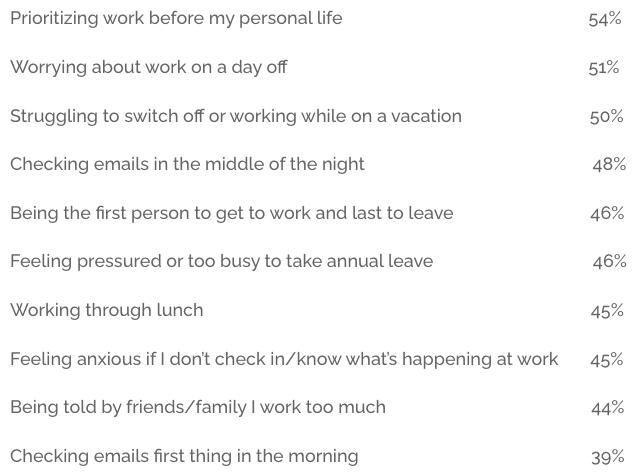 Despite being a recovering workaholic, I still can check off five of the traits above.

Ironically, most workaholics report a lower job satisfaction than do non-workaholics. For years, I felt stuck in a job that afforded me a great lifestyle. I yearned to make a career shift to fee-only financial planning but hesitated because, at least initially, it would not have paid the bills.

Being obsessed with and addicted to work can have serious negative effects on relationships—including our relationships with ourselves. I can attest that this was true of myself 30 years ago, when I routinely worked 80-hour weeks. There is no doubt I was medicating with work. One of the consequences was the end of my first marriage.

Workaholism is often a family disease, what the field of IFS therapy would call a Legacy Burden, passed from one generation to the next. Workaholics tend to be productive and perfectionistic, with feelings of inadequacy, anxiety, and depression.

Gabor Mate, author of the bestseller In the Realm of Hungry Ghosts: Close Encounters with Addiction, affirms the link between trauma and addiction. He says, “I think childhood trauma or emotional loss is the universal template for addiction.” It is impossible to understand workaholism without asking what relief the work addict finds, or hopes to find, in work.

Workaholism, like other addictive behaviors and destructive money beliefs, can be rewired and changed. The first step is to acknowledge it, not as an indicator of success or a trait to be admired, but as a disordered behavior. Then you can begin to heal the underlying trauma and change the behavior.

Today, I still focus a great deal on my work. Does this mean I’m still a workaholic? I think not. I do a job that is greatly satisfying, that I love, and that—most days—feels like play.

Related: Ten Things a Financial Therapist Wants You To Know