Why We Need To Learn To Unlearn

The Cycle of Unlearning isn’t a once-and-done event. It’s a system—a habitual, deliberate, and repeating practice of letting go and adapting to the situational reality of the present as we look to the future. ~ Barry O’Reilly

I’ve had a couple of conversations this week with people about forming internal plans or business pitches. One was with a company who are embarking on a ‘big transformation project’. (As an aside, why are transformation programmes always ‘big’? They are never discreet, small, focused or time-boxed. I reckon that’s part of the problem).

The plan on the face of it sounded great – a crystal clear plan of getting from A to B to C. Any board would lap it up and press go. Except we all know that life isn’t like that at all.

Things rarely, if ever, work out as planned.

So why do we persist in presenting plans that offer the illusion of certainty but are bound to get disrupted?

It reminds me of those Plans v Reality memes: 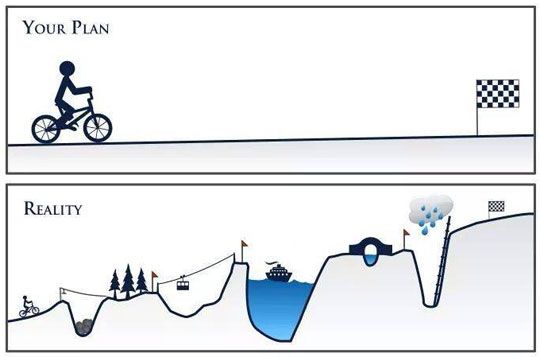 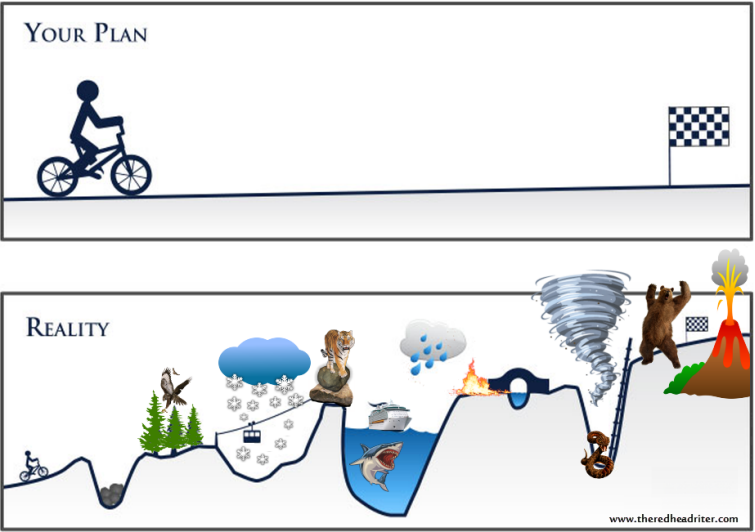 The first lesson to be drawn from 2020-21, and undoubtedly the biggest lesson, is that the future is entirely unpredictable, whatever your plan says. As Jason Fried has said – a plan is just a guess that you wrote down. “Financial plan? It’s a financial guess. Strategic planning? Call it with it really is: a strategic guess. 5 year plan? You mean 5 year guess.”

I imagine we present plans in a fail-safe way as fundamentally we are optimistic and we all want to believe the future is predictable, despite the evidence to the contrary. And of course we want people to think we are competent: why would someone buy-in to a plan that predicts we are going to mess up at some point?

But we will mess up. I’m working on a proposal with a group of colleagues at the moment that has a high failure probability, or at least a high probability that things won’t work out as expected. We’ve initially time boxed it to just six months and resisted any pressure to imagine what it looks like twelve months from now. Why? Because when you’re trying something new involving multiple moving parts, you’re better to get a start on something and begin learning rather than spending months trying to predict the unpredictable or try to avoid the unavoidable. If we all focused on becoming endlessly adaptable rather than pretending to be fortune tellers or soothsayers, we’d build much more resilient workplaces.

None of this answers the why. Why are executives and management teams hooked on receiving plans that offer up what is likely to be an overly optimistic , if not unreal, vision?

I think a lot of this is rooted in our obsession with heroic leadership and leaderism. We have a disconnect before us:

This can only be bridged by those in power challenging their mental models of the world, and allowing more people to try new things out without requiring them to produce cast iron guarantees of success.

As Neil Tamplin has written , in today’s world of work people want to be accountable for their own actions and our leaders can’t possibly know the fullness of every decision they make. In our increasingly uncertain operating environments, this model is setting ourselves up to fail because we choose to avoid vulnerability and uncertainty in favour of comfort. Empowering people throughout a company doesn’t mean abolishing leadership, but democratising it. Anyone can and should be able to lead

I’ve picked up a lot of useful insights from the work of Barry O’Reilly and his book, Unlearn.

Unlearning is the process of letting go, reframing, and moving away from once-useful mindsets and acquired behaviours that were effective in the past, but now limit success. To succeed in this rapidly changing world, we need a system to recognise when our existing behaviour is working (so we continue with it), and when it’s not (so we unlearn).

The design principles we try to follow as a business try to promote unlearning , abandoning , and ceaseless questioning. Just having principles doesn’t change behaviours, but it does at least create a visible template of what we are striving for. 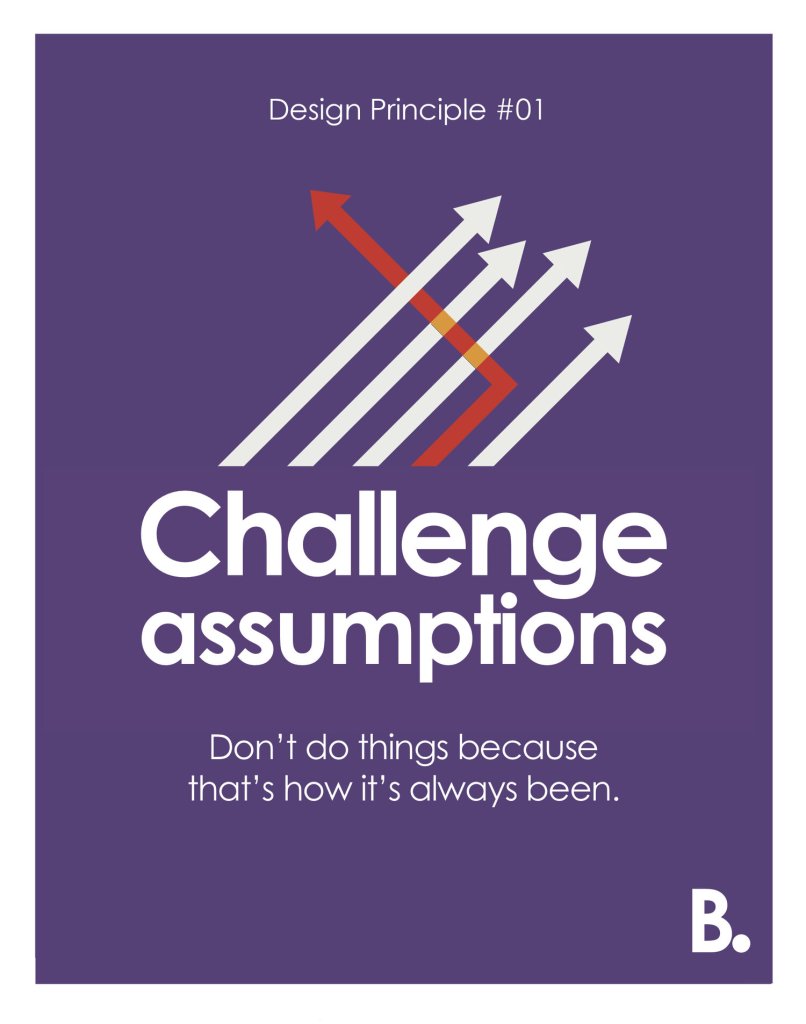 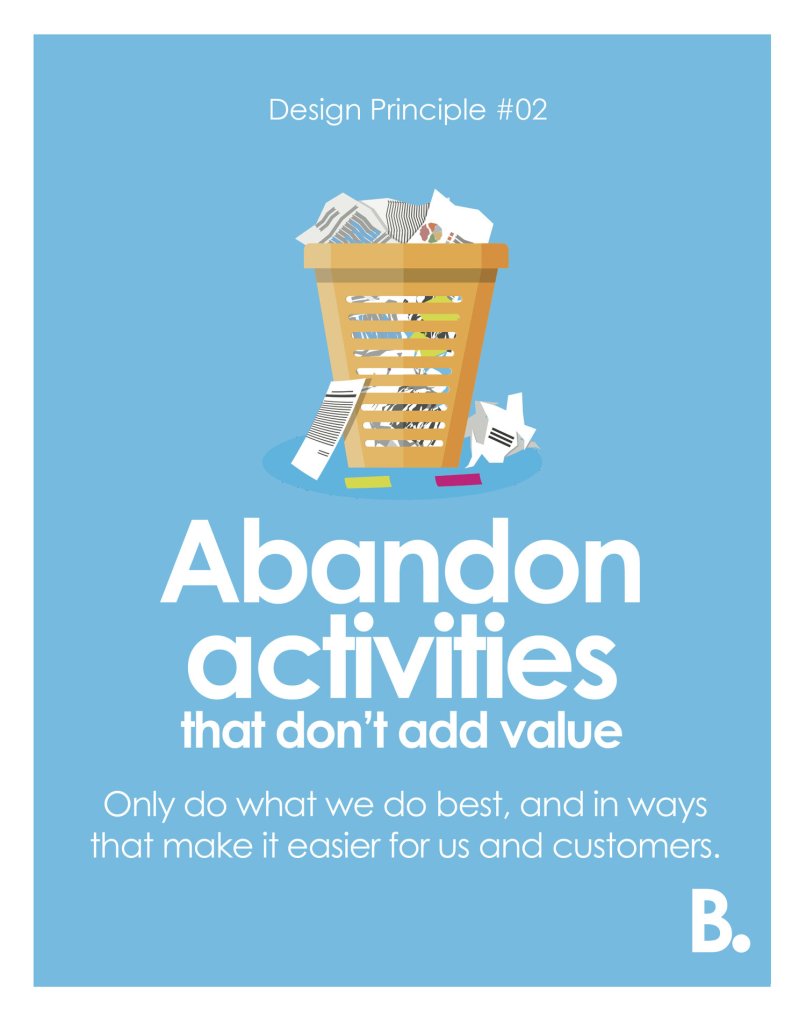 Why We All Need To Learn To Unlearn

We often talk about losing organisational knowledge and skills in a purely negative sense. ‘There are too many people leaving the business, we are losing too much experience’. But 21st century business is not just about keeping existing information, knowledge and behaviours – it’s about unlearning the habits and beliefs that hold us back, and replacing them with habits and beliefs that help us to prepare for the future.

None of this is to say that we don’t need business plans , policy or forecasts, but that they should now be put together on the basis that we will fail at some point and we’ll need to adapt them again and again. Learning, unlearning and relearning as go.

Related: The Productivity Paradox and Zoom Fatigue: Why Technology Won’t Solve Our Problems