The Way We Work Isn’t Working

The office, after management, is arguably the biggest inefficiency tax that organisations layer over themselves.

They cost huge amounts to procure and maintain, they become an all too convenient base for meetings (another inefficiency tax), and they set a precedent for the expected hours that people are meant to work. 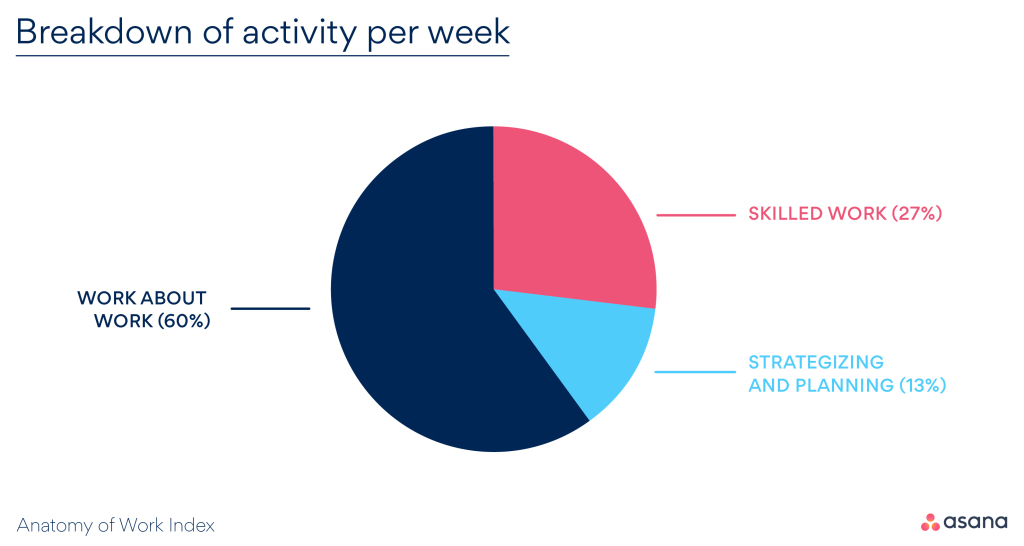 Offices promote lengthy commuting which has consequences for both the environment and our own mental health. A recent study found that just a 20-minute increase in commute time is equivalent to getting a 19% pay cut for job satisfaction.

Most importantly – our workspaces have a productivity problem.

Despite technology which previous generations could only dream of we’ve never felt so unproductive at work.

A recent report from Asana finds that employees spend nearly two-thirds of their day on “work about work”. Constant emails, message notifications, and unexpected meetings consume the best part of most days.

Over 10,000 people were interviewed globally and there’s some significant findings:

The majority of respondents’ time (60%) is spent on work coordination, leaving just 27% for the skill-based job they were recruited to do.

Responding to a constant barrage of emails and notifications is the primary reason that nearly one-third of employees regularly log extra hours, followed by unexpected meetings and chasing people for input or approval.

Respondents surveyed believe that nearly two-thirds of meetings are unnecessary.

Over 10 percent of an employee’s day – 4 hours and 38 minutes per week – is spent on tasks that have already been completed. This amounts to more than 200 hours of duplicated effort and wasted efficiency annually.

Less than half (46%) of respondents surveyed clearly understand how their output contributes to the achievement of their organization’s objectives and mission. 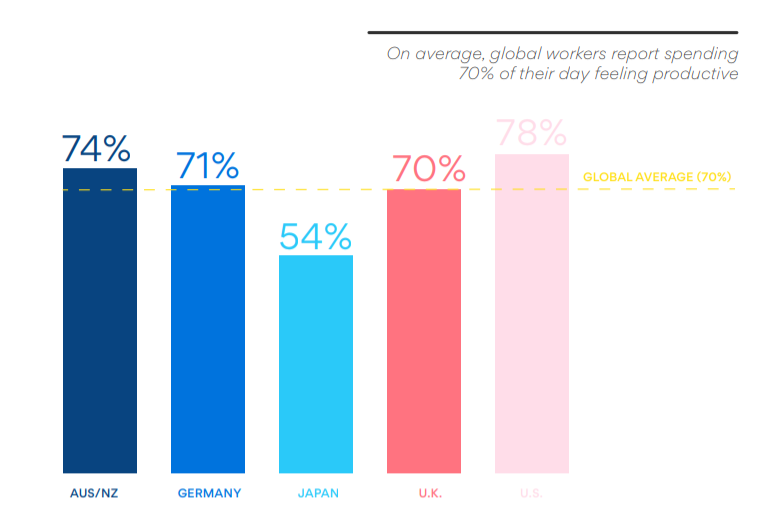 It’s astonishing to me that this isn’t bigger news within organisations – the cost of unproductive downtime plus the wellbeing impact is mind boggling.

Parkinson’s Law. Work expands to fit the time available for its completion

In a post that is more relevant than ever Chris Bolton asks why do we waste so much time on trivial things in work? One of the reasons is our tendency to hoard unnecessary resources – to fill work with work.

“The basic theory is that an individual within a large administrative organisation will reach a point in their career where things start to get a bit ‘too much’ for them. Rather than leave the job or share it with anyone else, they make the case for acquiring subordinates. Subordinates will lead to more subordinates and eventually there is a department to manage. However, the quantity of real work hasn’t actually increased very much (if at all).”

The ways most organisations respond to a new circumstance is simple: hire more resources. Even though everyone knows that throwing more resources at things is the very worst thing you could do.

The growth of ‘work about work’ seems unstoppable.

As Gary Hamel has explained – a small organisation might start off simply – one manager and 10 employees.  But as it grows it will often keep this ratio and sometimes reduce it. So an organisation with 100,000 employees will have at least 11,111 managers. Because an additional 1,111 managers will be needed to manage the managers.

And that’s before you go near management related functions whose entire function is , well , management.

The constant interruptions to our work day means very few of us spend time in a state of flow. Flow, a state of consciousness where we feel our best and perform our best, is the most desirable work state on earth, but it’s also the most elusive.  According to Steven Kotler , the average person spends less than 5% of their day in flow. If you could increase that to 15%, overall workplace productivity would double.

Arguably we are into wicked problem territory – with a complex web of technology, management and bureaucracy.

In the report Asana naturally put a lot of emphasis on the role technology could play – and they are right – it is ridiculous that in 2020 colleagues are duplicating effort on the same tasks. The tools are here to design that out today.

I’d go further and suggest that every manager should attend productivity training on an annual basis – and be assessed at their competence at using collaborative tools.

We also need to challenge our culture of busyness which worships at The Altar Of Having Too Much To Do.

We haven’t got too much to do – we’ve got too much ‘work about work’.  And the onus is on each and everyone of us to fight it.

The Asana Anatomy of Work Report can be downloaded here

Related: The Creative Value Of Open-Mindedness