The Problem With An Over-Reliance On Data

Data doesn’t say anything. Humans say things. We’ve conflated data with truth. And this has dangerous implications for our ability to understand, explain, and improve the things we care about. — Professor Andrea Jones-Rooy 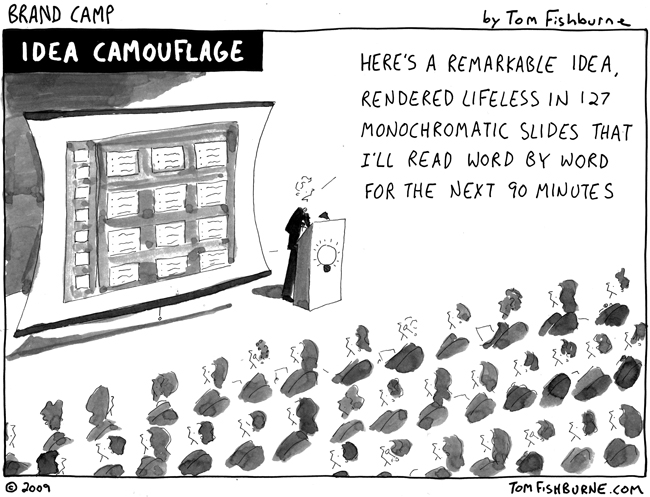 Last Saturday evening fans of Little Mix who had tuned in to BBC1 to watch the latest episode of their talent show, The Search, were instead treated to a contender for the world’s shittest PowerPoint presentation.

The slides, introduced by the government’s chief scientific adviser Patrick Vallance and its chief medical officer Chris Whitty, have been variously described as unstructured, ugly and unclear on what they were trying to get across to the public.

Whether you are pro, anti or ambivalent towards the latest lockdown – you had to be a near genius to draw anything meaningful from what was a truly baffling slide deck.

16 data heavy slides in just 12 minutes, some not even fitting on the screen. A spaghetti junction of graphs and charts rather than simple take away headlines. Labels and colour codes indistinguible or missing entirely.

This was a masterclass in how not to use data in your organisation. 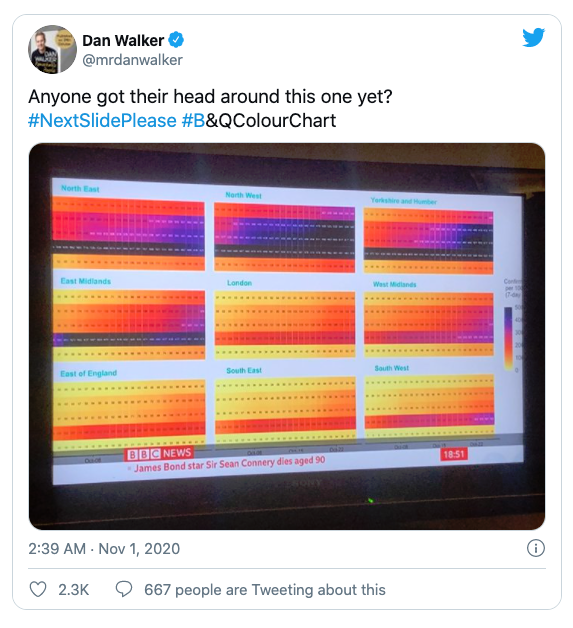 There was a certain dark humour on Twitter with people wondering whether Death by PowerPoint was as painful as Death by COVID.

Of course, this is genuinely no laughing matter. How can key public health messages be delivered from the highest office of the country in a way that would embarrass the most inexperienced comms newbie?

One of the answers is that the data has been allowed to take over from the story. In the first lockdown the story was very clear indeed and we all complied. Now, I’m not sure we know what the story even is.

What the Government want us to do is to change our behaviours, and you make change through stories, not statistics.

We’ve all sat through presentations like this at work. We’ve all the heard a presenter say “You probably can’t see this diagram from where you’re sitting but what it’s showing is…”.They are often put together by someone deeply in love with their own subject matter or persons with a strange proclivity for Venn and Sankey diagrams.

The reliance on data as a way to seek truth has boomed in recent years. The more data you are armed with the better, or so it seems.

I regularly hear companies say they are incapable of making a decision about something as they don’t have enough data, the right data, or because the data they have is of poor quality.

This notion of data equalling a divine truth needs challenging. As Andrea Jones-Rooy writes in Quartz, data only exists in the first place because humans chose to collect it, and they collected it using human-made tools. Therefore data is as fallible as people.

As she says “Data is an imperfect approximation of some aspect of the world at a certain time and place. As long as data is considered cold, hard, infallible truth, we run the risk of generating and reinforcing a lot of inaccurate understandings of the world around us.”

That said – we still need to believe in data. Data is necessary for us to understand the problem and to begin asking questions about it. It is only through asking those questions that we find a pathway towards a solution.

And therein lies the problem with the way much data is presented. It lends itself to generating confusion rather than great questions.

Or worse – it leads to mistrust.

Ed Conway, the numbers guy from Sky, has done a superb Twitter thread on this – “Lockdowns, like em or not, won’t work if no-one trusts the process and doesn’t comply. But that trust is earned. And easily lost. How do you earn trust? Well part of the answer is transparency. If you’re clear and honest about why you’re doing something and the evidence behind it, you will bring people along with you.”

Ed concludes that we need transparency, and that means not using out of date, poorly labelled charts to justify decisions. Or hiding data that helps explain why we’re facing unprecedented restrictions.

It’s a theme that Gavin Freeguard picks up for the Institute for Government – pointing out that badly presented data will be confusing to people inside government too. If we as the general public are having difficulty understanding messages across (and within) datasets, it suggests those inside government are having similar struggles. Indeed, making sense of the data is made nearly impossible by the sheer number of sources in use. There’s the ONS, PHE, NHS as well as other sources in Wales and Scotland.

The Case For Better Data

We need good data to ask better questions. It is only through those questions we’ll solve better problems and have greater impact.

We need to bring better data insights to our colleagues. We need to get better at ‘data storytelling’ that gives anyone, regardless of level or skill set, the ability to understand and use data in their jobs every single day.

It’s the best way to give our people the story about what’s happening and what we need them to do.

Poorly presented though, it may also be the worst.