The Clock Could Be Ticking for Favorable Estate Planning Provisions

Estate tax laws have been undergoing change over the last couple of decades, but in every instance of revision, they have managed to move forward, not backward, regarding exemptions, rates and flexibility. Despite this, the recent election of a new presidential administration and a new Congress could change that. The Biden administration frequently hinted at a possible reduction of the estate and gift tax exemptions to 2009 levels. Since the actual extent and timing of the potential changes are uncertain, admittedly, implementing a tax-aware estate transfer plan is more difficult than ever.

The passage of the Tax Cuts and Jobs Act of 2017 eased some of the pressure to give away assets when it increased (essentially doubled) the estate and gift exemption to $11.7 million, indexed for inflation (at least through December 31, 2025). For most married individuals, the ability to transfer $22.4 million was sufficient to reduce the need for accelerated gifting. Many, at the advice of estate planning practitioners, began focusing on planning techniques to “freeze” appreciation by using Grantor Trusts, Grantor Retained Annuity Trusts (GRATs) and other valuation reduction techniques. That could all change in the coming months.

In late March, Senator Bernie Sanders introduced the “For the 99.5 Percent Act”. It proposes that the estate exemption be reduced to $3.5 million and the gift tax exemption be limited to $1 million. In addition to the lowering of the exemptions, the proposal calls for an increase in the tax rate applied to taxable estates, beginning at 45 percent for estates valued up to $10 million and as high as 65 percent for those valued at $1 billion or more. The generation-skipping transfer tax (GSTT), which is applied to assets transferred to a beneficiary one or more generations removed, would impose a 65 percent rate and limit the ability to transfer assets to multiple generations for years to come. These changes could significantly reduce the ability to transfer assets to the next generation free of estate tax. 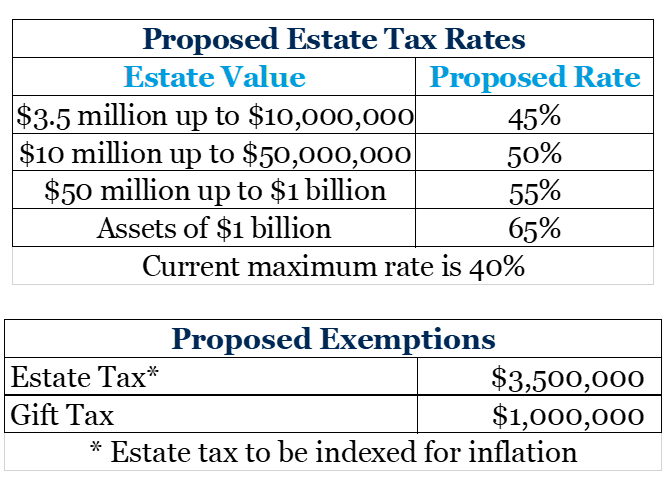 If passed, most provisions of the “For the 99.5 Percent Act” would become effective for transfers occurring after December 31, 2021. The Treasury Department and IRS issued final regulations in November 2019 clarifying that taxpayers taking advantage of the increased exemption amounts would not be subject to a claw-back should exemption amounts decrease, so using them before they expire should be a priority.

But not all provisions of the “For the 99.5 Percent Act” will receive delayed enactment. A few provisions as drafted are set to become effective as of the date of passage of the act. Three popular estate planning techniques which could be immediately impacted under the proposal include:

No More Zeroed out GRATs

One common technique that has been a target of elimination for some time is the so-called two-year rolling GRATs. They are used to transition appreciation of an asset out of an individual’s estate without using the estate or gift tax exemption. The “For the 99.5 Percent Act” would require that all GRATs adopt a minimum 10-year term and a maximum length of the annuitant’s life plus 10 years. This would significantly reduce the attractiveness of GRATs in most estate plans. This provision of Senator Sanders’ proposal is set to apply to transfers made after the date of enactment; therefore, those who wish to continue to use this technique should proceed quickly.

For newly implemented or revised IDGTs, the “For the 99.5 Percent Act” calls for all assets to filter back to the estate of the grantor (essentially eliminating the estate-freezing benefit of GRATs) and any distributions made from the trust during a grantor’s life to a beneficiary count as a gift subject to the gift tax. Since the proposed Act provides an exception to the estate tax inclusion rule for contributions to the trust subject to prior gift tax, using your exemption now to fund such transfers may provide some benefit. Future adjustments to existing trust provisions may negate this exception therefore individuals should explore the potential impact of the proposed rules with their attorney prior to funding.

Valuation discounts have been a subject of debate between planners and the IRS for some time, particularly when used in the context of non-business assets. The current proposal attempts to settle this debate.

Under the proposed bill, transfers involving non-business assets (those not involved in a trade or business and/or real estate with material participation) to an entity (family limited partnership/LLC) would be valued as if they were transferred directly to the donee, effectively eliminating any discount opportunity. There would be no application of the lack of marketability or control discounts for any stakeholder considered a “member of the family”. Notably, those employing discounts to transfer family business interests or real estate with material participation will not be affected by this proposal. If a family is considering implementing a non-business family partnership and wants a valuation discount, the time to act may be now, as this provision would take effect as of the date of the passage of the bill.

In addition to the increase in the tax rate for the Generation Skipping Tax to 65 percent, the “For the 99.5 Percent Act” attempts to curtail the multigenerational tax benefits for those trusts that qualify as generation-skipping trusts by imposing a 50-year limit on their duration. Under the plan, trusts would automatically be subject to the generation-skipping transfer tax when they reach their fiftieth year of existence. While that might seem like a long duration for a trust, it effectively limits the tax efficiency of dynasty trusts. For families with existing, or those contemplating establishing multigenerational trusts, the impact of forced trust termination of the trust at year 50 should be considered.

The “For the 99.5% Act” as proposed threatens many areas of estate planning, but which provisions (if any) become law will be determined in the coming months. While almost no one enjoys paying taxes, the fear of giving too much away, or worse, the loss of control, can present challenges when embarking on advance estate planning. With the potential for significant changes to the estate and gift tax, it is more important than ever to review your estate plan with your attorney to determine how these changes affect you and your family and to explore options that may allow you to preserve your assets for generations to come.

Related: Will Your Health Care Directives Protect You?