How Should I Position My Portfolio Before the 2020 Election?

Every 4 years this question surfaces and investors try to predict which candidate will be better for the economy and stock market.

We were fortunate enough to briefly discuss this topic in a client webinar with Dr. Apollo Lupescu.

Apollo shared his insights on what to expect from the stock market in an election year in addition to other timely topics including if we can recover from this crisis and how to invest during a pandemic.

While 2016 may seem like a distant memory, many investors were concerned at the time that a Trump victory would surely tank the stock market.  We fielded a lot of calls leading up to the 2016 election discussing if a more conservative approach should be taken, at least until we had more certainty.

While Trump’s victory was a surprise to many 4 years ago, it certainly was not devastating for the stock market.  In fact, the S&P 500 with dividends returned 21.83% in the following calendar year of 2017.  Investors who moved into cash to await more clarity would have swiftly regretted their decision.  The chart below shows annualized returns for each president dating back to 1969 with the red and blue bars depicting results for Republicans and Democrats. 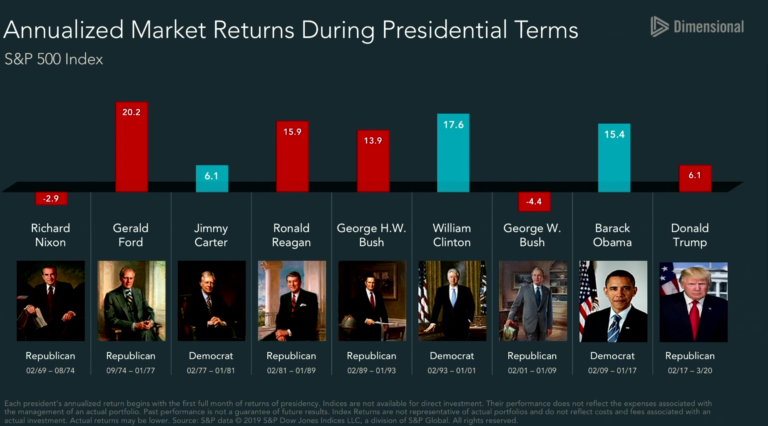 While there are a lot of theories about whether Republican or Democratic policies are better for the stock market, what we see is that over the long term, the stock market has rewarded investors regardless of who was in office. 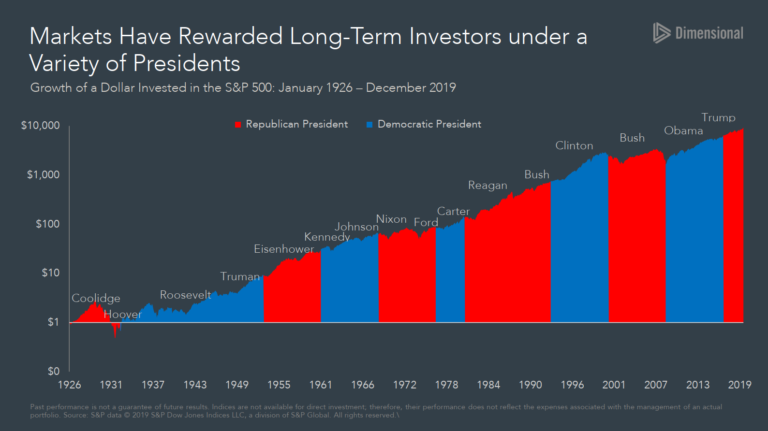 Historically the S&P 500 has grown ~9-10%/year.  On average an election year is no different.  Since 1926 we have had 23 different elections.  Of those 23 elections, we saw 4 that posted negative stock market performance for the year. 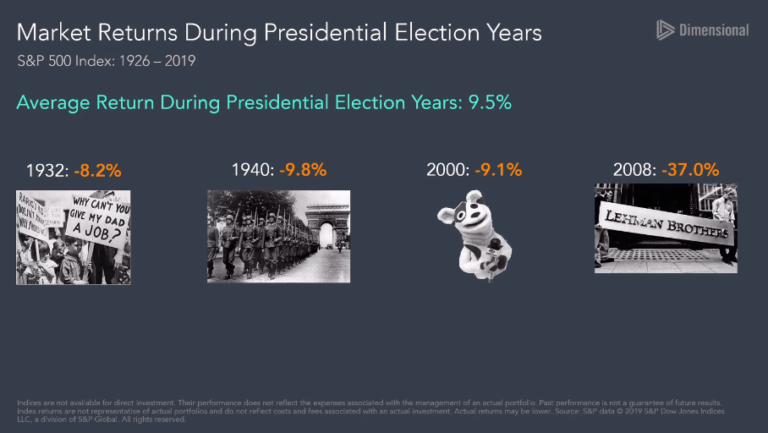 Of the 4 negative years, some remarkable things were happening aside from a presidential election:

Viewing the negative years in the context of these major events, it’s evident that the stock market results were influenced by forces much more powerful than the election.  It’s quite possible that 2020 will go down in history as posting negative market results in an election year.  If that happens, it’s unlikely to be a result of only the election.

2020 has been a year like no other.  We are living through a global health crisis, historic unemployment, and drastic changes to our daily routines.  And while the stock market initially reacted very negatively to the coronavirus pandemic, the recovery from the March low has been swift and dramatic.

While it’s attractive to draw conclusions about how the market will react to an election, market forces are not that simple because so many factors influence stock prices.  An election should not drive investors to buy or sell.  Those decisions are best made in the context of a long-term financial plan.  Long term investors are rewarded for bearing uncertainty.  Despite there not being a direct correlation between who is in office and stock market results, it is still important to vote!  We encourage you to vote, express yourself, and vote your conscience at the polls in November.

Related: Can We Recover From This? A Look Back at 3 Historical Events