Even More Tech Firms Are Leaving Silicon Valley for Texas

Hewlett Packard Enterprise is pulling up its stakes in Silicon Valley and heading for Texas. It’s not the first big tech firm to make the move, and it won’t be the last.

If you visit the private HP Garage museum in Palo Alto, California, you’ll see a plaque proclaiming it as the “Birthplace of Silicon Valley.”

“This garage is the birthplace of the world’s first high-technology region, Silicon Valley,” the marker reads. It names two Stanford students, William Hewlett and David Packard, who “in 1938 began developing their first product, an audio oscillator, in this garage.” (The pair’s first customer? Walt Disney, who was then working on 1940’s Fantasia.)

Earlier this month, Hewlett Packard Enterprise (HPE)—as the company is now known—announced that it would be leaving Silicon Valley for Houston, Texas, where it’s currently building a state-of-the-art campus. (HPE, which makes servers and networking gear, is not to be confused with HP Inc., the laptop and printer-maker. The two companies were created in 2015 after the Hewlett-Packard Company split its businesses.)

It’s not the first tech company to relocate its headquarters from California to Texas, which by all accounts has a much more favorable business climate. SignEasy, QuestionPro and DZS all made the move in the past 12 months. What makes HPE’s decision especially notable is not just its size—the company reported $7.2 billion in sales in the quarter ended October 31—but also its role as one of the founding companies of Silicon Valley.

Elon Musk Snubs California. Is Tesla Next to Come to Texas?

I don’t believe HPE will be the last big tech firm to say goodbye to the Golden State and hello to the Lone Star State. Speculation is rampant right now that Tesla may be next to make the move.

It would make sense. Tesla CEO Elon Musk already has strong connections to Texas. SpaceX, the entrepreneur’s other main venture, has a rocket production and test site facility in Boca Chica, just south of Brownsville.

Construction on Tesla’s next production facility is taking place in Austin. Once completed next year, the factory will build not just EVs—including the carmaker’s upcoming Cybertruck—but batteries as well. Musk’s Boring Company, which specializes in tunneling and transportation infrastructure, is also reportedly eyeing the Texas capital, an emerging tech hub in its own right.

Now the world’s second wealthiest person, Musk moved this month from Los Angeles to Austin and brought with him his private Musk Foundation, which issues grants in support of renewable energy, artificial intelligence, space exploration and more.

Like Lonsdale, Musk had sharp words to share about California when he spoke to the Wall Street Journal this week, likening the state to a sports team that has grown complacent after winning too many games.

Such teams “tend to get a little complacent, a little entitled, and then they don’t win the championship anymore,” he said, adding that California “has been winning for a long time. And I think they’re taking [those wins] for granted a little bit.”

I often say that money flows where it’s respected most, and this story bears that out. Whereas California takes as much as 13.3% of top earners’ income—one of the highest rates in the U.S.—Texas is one of only seven states that does not have an income tax.

By becoming a resident of the Lone Star State, Musk is poised to save billions in taxes. This year alone, he’s seen his wealth grow by an unbelievable $120 billion as Tesla stock has surged more than 660% ahead of its December 21 debut in the S&P 500 Index. 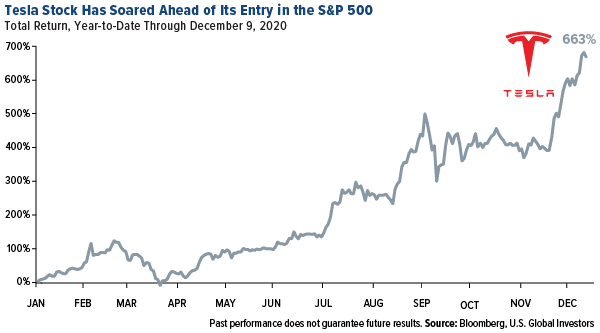 But it’s not just the uber-wealthy who are moving to Texas. According to New York-based fintech company SmartAsset, Texas ranked number two among states where upper-middle class families are moving. Between 2017 and 2018, Texas saw a net gain of 6,706 upper-middle class people, second only to Florida, which saw a whopping 18,876 people, SmartAsset reported in October. The firm defines upper-middle class as those with incomes between $100,000 and $200,000. 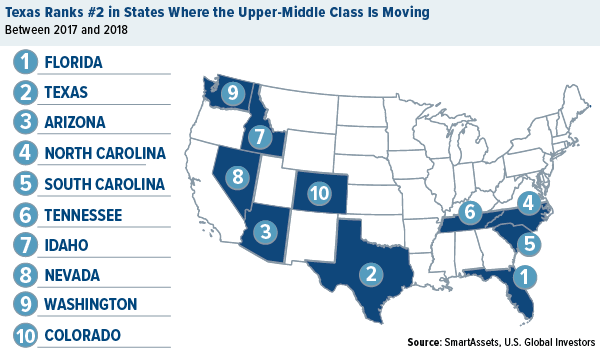 California, meanwhile, has seen a net outflow of people. In 2019, more than 653,000 Californians left the state while only 480,000 people became residents—resulting in a deficit of 173,000. Texas was the number one destination for those fleeing the state.

A look at housing prices helps explain why. At $242,000, the typical price of a single-family home in Texas was well below the national average as of October, according to Zillow data. Buying a similar home in California cost you nearly three times more, with the typical asking price pushing past $700,000. 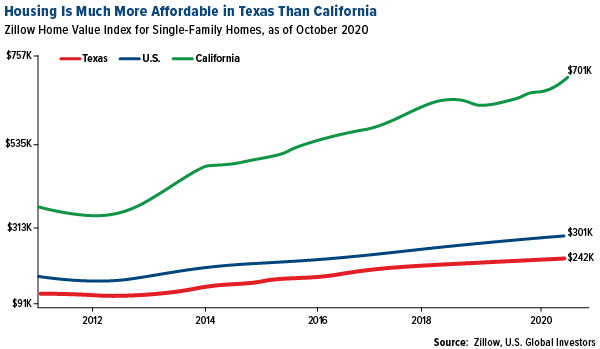 If that’s not bad enough, the cost of doing business in California is prohibitively high. The state ranked almost dead last in the Tax Foundation’s State Business Tax Climate Index for 2021. Only New Jersey ranked lower.

There’s a saying in Texas that you may have heard before: “I wasn’t born in Texas, but I got here as fast as I could.”

It’s a trite expression, and it looks good on t-shirts and coffee mugs. But it’s more than that. As many of you know, I grew up in Toronto, but San Antonio has been my home for over 30 years now. The city has also been home to U.S. Global Investors for more than 50 years. I wouldn’t have it any other way.

People are moving to the Lone Star State in droves because they can find all the amenities, culture and opportunities you might expect in places like California, at a fraction of the cost. Companies like HPE and, potentially, Tesla are similarly recognizing the advantages that Texas offers—a low cost of living, large talent pool, exceptional infrastructure and more.