Will Diversification Make a Comeback in 2023?

Diversification faced a challenging year in 2022, with the 60/40 portfolio (60% S&P 500 and 40% Bloomberg U.S. Aggregate Bond index) down 16% on a total return basis. Not only was it the worst performance since 2008, but also it was the first year since 1974 in which both stocks and bonds declined, highlighted below and on page 63 of the Guide to the Markets.

Although investors have come to expect a negative stock-bond correlation, in which stock prices and bond prices move in opposite directions, that was not the case last year. Persistent inflation caused the Federal Reserve to raise rates much more aggressively than initially anticipated, increasing the federal funds rates by 425 bps over the course of the year. Rates are the common thread between how stocks and bonds are valued, so higher rates put pressure on both stocks and bonds.

However, this dynamic could change in 2023, as we note in our outlook. Inflation appears to have peaked and is subsiding, as evidenced by normalizing commodity prices and supply chains, and waning demand for goods in favor of services. This should allow the Fed to end its rate hiking cycle in the coming months, limiting the rise in yields this year. In fact, a broadly forecasted recession would likely push yields down, supporting bond prices at a time when equities might struggle.

The dismal market performance and valuation reset in 2022 could set up a diversified portfolio for better returns in the year and years ahead. Last year was the worst year since 2008, but 2009 boasted positive returns for both stocks and bonds, and the 60/40 portfolio was up 18%. In 1974, both stocks and bonds were down, but both rebounded in 1975 for a 28% return on the 60/40. Challenges remained in both 1975 and 2009, but markets typically begin to recover before economic growth, the labor market, and earnings bottom. On a multi-year basis, the reset we saw in valuations in 2022 create a more attractive starting point for the years ahead. We project the 60/40 portfolio could return 7.2% annually over the next decade, compared to our projection of 4.3% at the end of 2021.

For long-term investors, buying the dips – in both stocks and bonds—could become attractive in 2023, and diversification could stage a comeback. 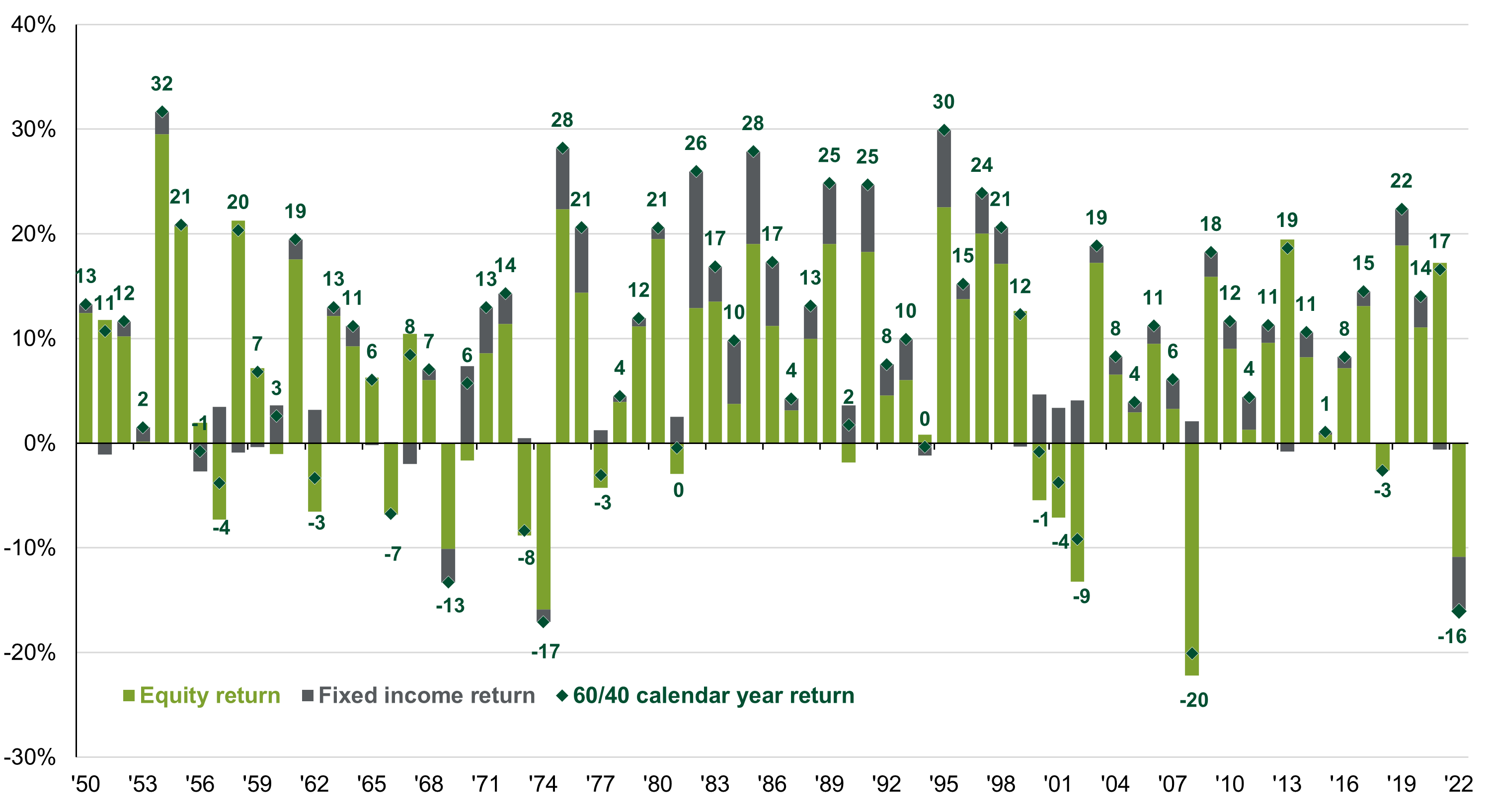 Related: How Will Investors Remember 2022?