A few thoughts on whether we’re in a bubble or not why at the end of the day I don’t think it will matter….

The VIX-plosion of February 2018 didn’t have an immediate catalyst. Instead, a slow buildup of short volatility chasers that began in institutional land and leaked out into retail through the easy-to-access XIV, an inverse volatility Exchange Traded Note. The shockwave across equities was fairly well contained, we saw a 10% decline that was followed by some whipsaw price action before finally resuming its trend higher. A few hedge funds and institutional investment firms went under due to their poor risk management strategies involving being short an excessive amount of volatility, echoing the theme of the housing market in 2006-2007, “housing prices never go down!” This time it was “Volatility always stays low!” Oh how the market loves to prove the over-confident wrong! This type of over-confidence peaks its head out every few years in different assets and securities. We saw it with Long-Term Capital Management in1998 and may be seeing it again today with the entrance of retail traders.

Charlie Kindeleberg in his book, Manias, Panics, and Crashes: A History of Financial Crisis, lays out the four “ingredients” needed to create a bubble and is described in the book Bull! by Maggie Mahar:

Do you think we could check any or all of those boxes today? A shock could be elimination of transaction fees or even the covid crisis. I think there’s little doubt that we have number four, there’s tremendous faith that Fed Chairman Powell will always swoop in and safe the day. I’ll leave you to judge if we have all four or none at all.

Mr. Market is like snake slithering through the high grass, seeking out the bold and boastful. It’s next victim is rarely known by a few until it’s known by all. 2017 and into the first weeks of 2018 the victim was short-vol, today where is the boastful, over-confident and the bold? Options. It’s been well reported the explosion in popularity of call options, the drug of choice for many new market enthusiasts. The siren song of cheap/zero cost transactions coupled with the greed and “I’m going to get mine” mentality that’s been brewing as the wealth gap has widened over the last decade.

Gunjan Banerji at the WSJ wrote on January 24th, “More than half a trillion dollars’ worth of options on individual stocks traded on Jan. 8 alone, the highest single-day level on record.”  Jason at SentimenTrader shared a great chart on Twitter recently that we continue to hit new highs of small trader call volume, accounting for 9% of total NYSE volume, compared to 2% peak in 2007 and 3% in 2018. The GS Index of the most shorted stocks has risen over 70% since the end of October, going near-parabolic to finish out 2020. One of the new Wall St. celebrities to come out of 2020 was Cathie Wood and the amazing performance in her firm’s ARK ETFs. But we’re not at the point where people are literally selling t-shirts with her ticker symbols on it and hats that say “BTC to the Moon”.  That kind of hero worship isn’t something you see at market bottoms. Is this enough to call it a bubble? Call it whatever you’d like, “bubble” is entirely subjective but beyond a duel of semantics, there does appear signs of froth in excessive speculation. 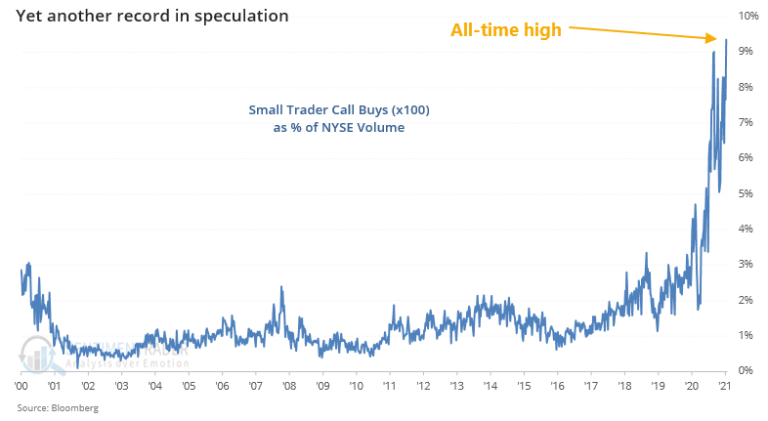 The gates has been lowered holding back the ‘average man’ from not just dipping their toe in the pool that’s brought great wealth to others, emboldened by the strong run in stocks off the March 2020 low. The access to platforms like Robinhood and reduction or elimination of trading costs as shorted the “discovery phase” of the speculative onramp of newcomers. It took several years to build in the 1990s, because just like it took an hour to download a song on Napster, it took a while for consumers to learn just how to make that proverbial easy buck from internet stocks. The saying “It’s different this time” actually does apply. Technology gives an injection of speed to nearly everything it touches, and the stock market is no different.

Retail investors aren’t alone in the chase, professional investors are ratcheting up their risk exposure as well. The latest BofA Fund Manager Survey showed a new record in percent of respondents saying they are “taking higher than normal risk levels” and the NAAIM Exposure Index has regularly been hitting above 100 levels (which suggests the use of leverage to get even more exposure to equities). Meanwhile the Put/Call ratio has been at basement levels for months, falling along with the percent of short interest and many other metrics suggesting risk management is less popular than wearing a mask by, never mind. 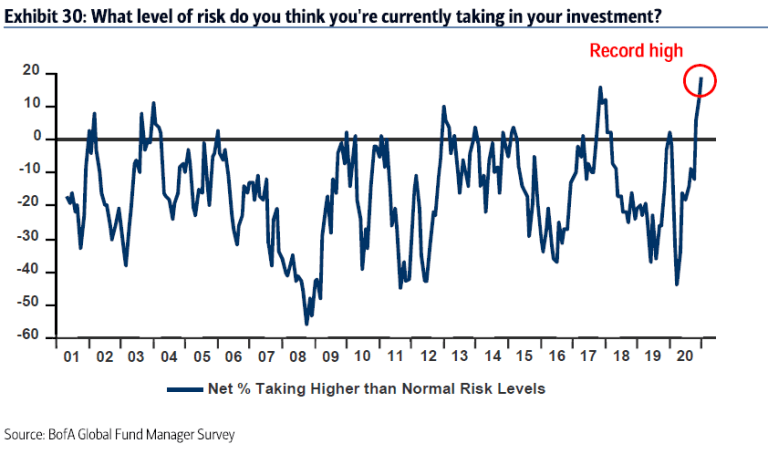 But back to the retail players… They have their tools from Reddit, TikTok, Facebook, YouTube, and Gary the taxi driver offering up stock tips. These tips are like free tanning oil at the beach for those seeking the deep dark tan of the young and beautiful. They’ve gotten tired of seeing everyone get a bronze glow and want to slather up and soak in the rays of a rising P&L too. But the longer they stay baking in the sun the greater the risk that oil causes them to burn, leaving the sand with more pain than they were seeking.  So far the market has been accommodative. Whether it’s GameStop, Tesla, or Bitcoin, the “YOLO” (you only live once) trade has pulled more participants into the sun. Twitter account, @Marketstream.io shared the chart below that was created from scrapping the trade position data from several popular Reddit trading communities and created a YOLO Index, which is up over 900% since January 2020. Does this look sustainable to you? 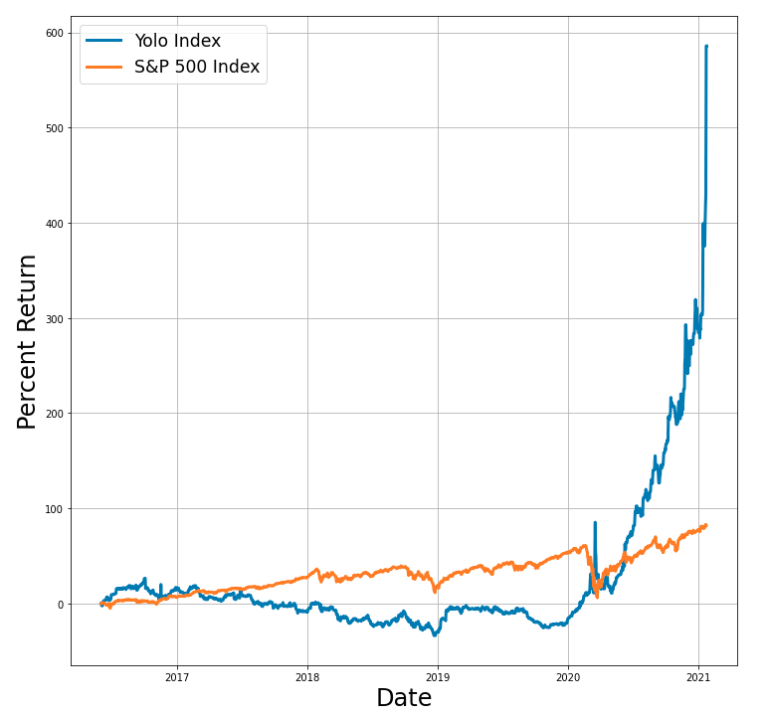 The question becomes, how long until these nouveau option geniuses get burned from over-exposure or Mr. Market attempts to teach a lesson of humility? No one knows but history has shown us the day will come. Fortunately for those that follow price activity, we don’t need a crystal ball to forecast the specific day of reckoning. It could be tomorrow, next week, or next year, it doesn’t matter! The result will be shown in the price discovery. When the internals and the indices begin to respond, price followers can recognize the change in trend and respond in-kind if needed per their own risk management process and time frame. At Thrasher Analytics we deploy the Market Health Report to help shine a light on our path within this jungle of a market along with the other tools and analysis deployed each week in the letter. Right now the market internals remain long-term positive with the large majority of stocks still well above their 200-day moving average and a healthy expansion of new highs.

As I’ve written already, and what’s begun to play out since, I think Tesla and Bitcoin are in for some tough times. Tesla market cap is now larger than the next eight automakers, combined yet it makes less than 4% of the cars. I last wrote about Tesla back in February 2020. Bitcoin has risen faster and by a larger percentage than any other ‘defined bubble’ asset in forty years, all on the hope and prayer of it having an actual use at some point (since you still can’t use your bitcoin to buy a Big Mac much less a Tesla). It doesn’t mean they will disappear into the market trash bin, but the velocity of their trends has gotten parabolic and unstable, refer to the letter last week and two weeks ago in the archive on the website.  This is notable because these are two of the darlings of the new Freshman class at Wall Street University. 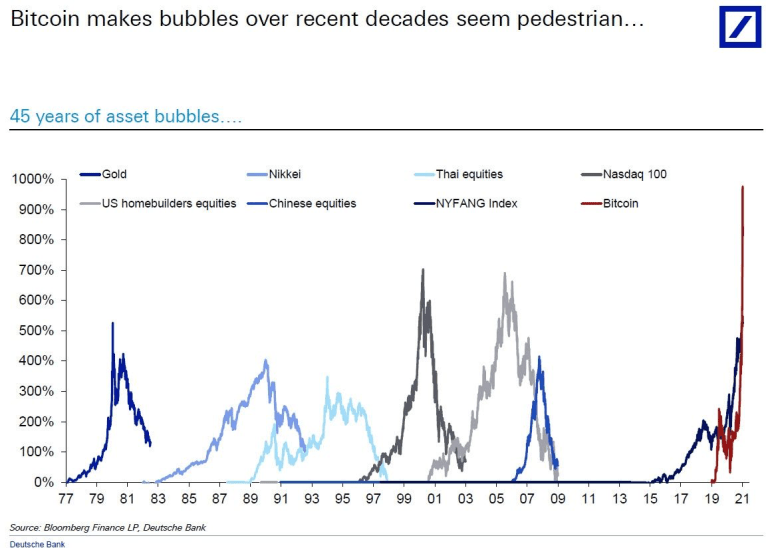 My approach to the market is to identify risks when they appear and then pause to see if the market responds. The calls for a Dot-Com mirroring bubble are loud. Maybe they are correct, maybe not. But truly it doesn’t matter. Because the response from the market is likely to be different. That was the biggest lesson I personally learned from the Covid Crash, the path won’t always follow a historical roadmap of past recoveries and it’s critical to recognize that and adapt. Some point to the recovery off the March 2020 low as the beginning of something new. A piece of me doesn’t agree. I don’t think we saw a great “reset” during that decline. It was more like the 1998 decline, stocks quickly recovered and resumed the trend that has preceded but there wasn’t a “reset” in stock valuations or sentiment. Goldman Sachs notes that Forward P/E is at the 98th %tile, Price-to-book is 94th, CAPE is 93rd, and enterprise value-to-sales is at the 100th %tile. If we had a ‘reset’ then we wouldn’t see valuations at these upper ranges already (but enough of me trying to make a fundamental argument…) I believe we’ll eventually look back at the Covid Crash as a very large bump in the road but not the start of new trend.

I lean more towards the idea that we are in bubble of some varying size, how it plays out after it’s popped though is anyone’s guess. A swift drop like February 2018 while delivering humble pie to overconfident short vol traders? Maybe. A protracted multi-year decline like after the Tech Wreck? Maybe. In the end, as I said before, we follow the path the market takes and adjust accordingly. Whenever a bubble is blown and does pop, it’s not likely to crest and resolve itself in a single day, so there’s likely to be opportunity for traders to recognize the bend in the trend. However, the sun will shine and burn up their accounts like many before them, at the current level of excess it doesn’t appear to be a question of if but instead of when.  Mr. Market won’t be made a fool for too long. The good news is there’s still a large majority in stocks in up trends. The greatest risk if some speculative pressure is released is likely in the high growth, ultra-speculative corners of the market which is where the new market participants seem to believe they’ve bested the bull and are mining gold.

To learn more about Thrasher Analytics and to subscriber: www.thrasheranalytics.com

Related: Is It Possible To Have Too Many Stocks Supporting the Market?