Warning for Bumpy Markets in 2022

Last December my Viewpoints article was titled, “Let’s Party Like Its 1999!” In that article we looked forward to 2021 as a year when the euphoria was similar to 1999. I think we can all agree that the environment was overwhelmingly giddy. Returns for equities have been robust, which was also similar to 1999. Returns for bonds have been hard to come by as bonds continue to have negative returns for 2021. Last year we correctly forecast that record levels of fiscal and monetary support, along with vaccines, would translate into superior equity returns. We felt that the US dollar would be under pressure given the enormity of the Fed’s currency creation and the fact that inflation was bubbling; we have been wrong on that front this year. We still don’t see the conditions that would support a sharp rally in the dollar, and we may very well see a weaker dollar in 2022.

We also correctly forecast the broadening of the rally and the recent breakdown of the high-flying “stay at home” stocks. Goldman Sachs tracks many of these non-profitable stocks in the GS Non-Profitable Tech basket (which is comprised of non-profitable U.S.-listed companies in innovative groupings) and as shown below, plummeted by 42.58% from its high in February of this year and has broken its prior low set this May. The market is now focusing on profitability and not just a plan to become profitable. Make no mistake, many of these companies will survive and thrive, but valuations often become untenable. 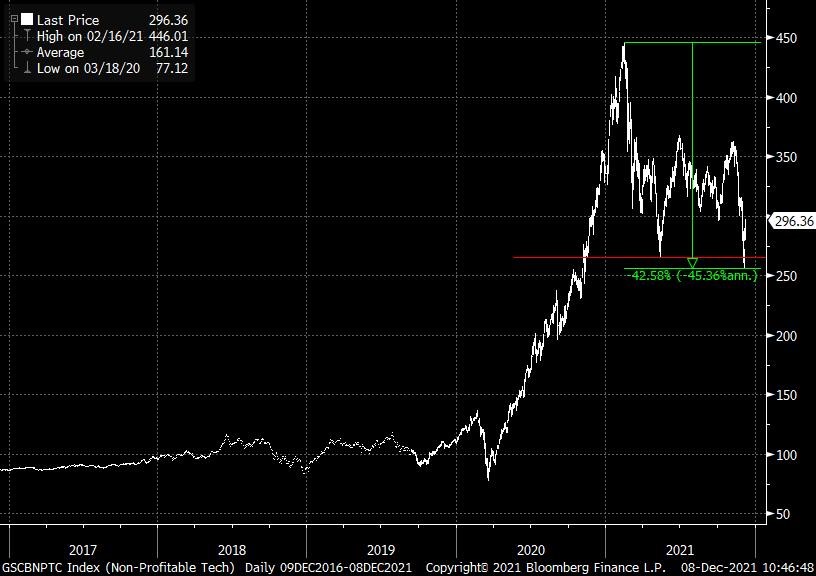 We believe conditions favor continued economic growth; however, several headwinds have manifested that could significantly reduce the profitability of U.S. companies in 2022. Earnings pullbacks could happen in large part because of persistent inflation in wages and input costs along with continued supply chain problems challenging margins. The prognosis for the pandemic presents challenges as new variants continue to muffle the economic recovery. It is also likely that the consumer could have a difficult time maintaining demand in an environment where increases in the cost of living (inflation) acts as a direct tax and reduces purchasing power. Finally, the Fed and Congress will likely begin to drain the punchbowl of stimulus in 2022. We don’t expect a recession, nor do we see a major drawdown, but we do see more and more evidence that 2022 could deliver much more tepid returns along with a rise in volatility.

Given our somewhat modest upside scenario, it is incumbent for us to also look at the growing evidence that peak valuations for equities for this bull market may be upon us. Many will dismiss this evidence believing that it will indeed be different this time. I suggest that it is almost never different this time. The equity markets have done an excellent job of policing excesses to date, but that can and likely will change at some point in the not-too-distant future. The evidence is significant that we are in the later innings of this market cycle, and therefore believe it is incumbent that asset managers adjust their risk levels accordingly.

Looking at valuations in the equity markets makes us become very cautious about deploying capital in areas that still appear to be very frothy. Rich Bernstein and team recently penned a piece titled “Bubble? 5 for 5” which I suggest is fundamental reading for anybody deploying capital for investment. If you don’t know Rich, he was the Chief Investment Strategist at Merrill during his 21-year career at the firm and now runs Richard Bernstein Advisors. He correctly called the bear markets of 2000 and 2008 early. In this article he outlines five characteristics of a market bubble:

We find this analysis quite sobering. It is not just Bernstein calling for caution; Savita Subramanian, U.S. Head of Equity Strategy at Bank of America Securities has presented her outlook for 2022 with an S&P Target of 4,600 by the end of 2022 (the S&P is around 4,700 as of the time of this article). This negative call is gutsy, but a closer look shows there are very real reasons for her conclusions including:

1. Earnings growth in 2022 could slow dramatically from the 48% in 2021 to around 6.5% in 2022. Margins could be under pressure because of rising input costs (inflation) and rising capital expenditures in the face of lower consumer demand.

2. Higher inflation will likely result in the Fed acting sooner rather than later to tighten monetary stimulus. Tightening liquidity is typically a challenge for longer-duration assets such as growth stocks trading at peak valuations. She notes that the S&P 500 currently has the duration of a 35-year zero-coupon bond. See chart below:

Valuations of the S&P 500 are at levels not seen since the “dot com” bubble in 1999. At 28 times trailing earnings, the S&P is 46% richer versus the long-term average. 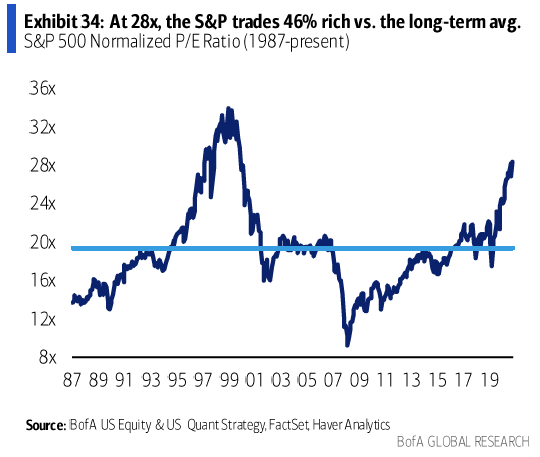 3. The Sell Side Indicator shown below was invented by Merrill back in 1985 as a CONTRARIAN quantitative measure to track the level of optimism of “sell side” strategists. As Wall Street becomes more bullish, this indicator moves more bearish. Right now, the indicator is knocking on the door of a general sell signal as bullishness on Wall Street has become extreme. Historically, this indicator has been very accurate. 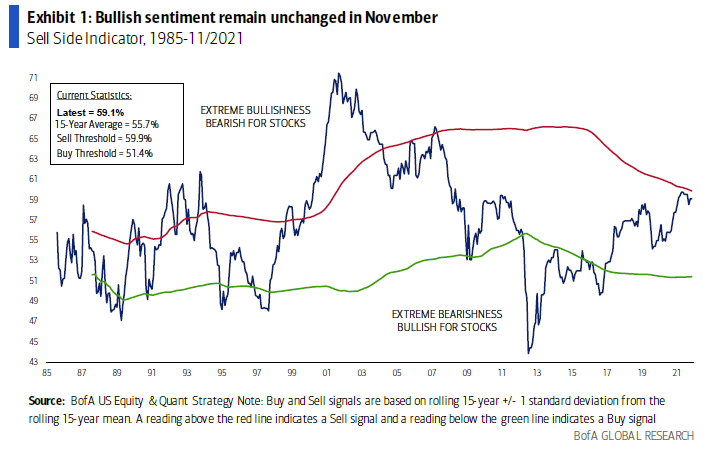 4. Along the lines of our earlier comments regarding price action of companies with no earnings, the BofA report notes that more companies without earnings have been floated this year than at the height of the “tech bubble.” 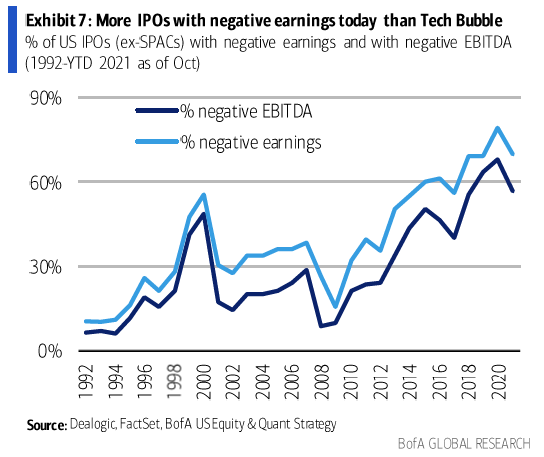 There is a lot more meat in these reports than I have summarized here, and I highly suggest taking the time to read them. Let’s remember that the financial world has changed dramatically since the beginning of the pandemic; we have witnessed a deployment of record fiscal and monetary stimulus in the form of a direct injection of currency into the markets and, added to that, we now have inflation that has proven thus far to not be transitory. I believe this should change the fundamental way we think about investing going forward. Remember that those who fail to learn from history are doomed to repeat it. The first decade of this century had no returns if you suffered through the dotcom drawdown. Bank of America Securities’ models show a negative price return for the S&P of 0.5% per year for the next decade – for the first time since 1999.

Our expectations for 2021 made in the Viewpoints article a year ago suggested that investors overweight Energy, Commodities, Materials, Financials and Industrials. Year-to-date sector performance (through 12/7/21; as measured by sector ETFs) shows the following results (our favored areas in bold):

Past performance is not indicative of future results. It is not possible to invest directly in an index.

As we have stated, we don’t necessarily see a down market in 2022, but a much more selective market. With the Fed tightening, inflation expectations persistent, globalization on the decline and the lack of any meaningful correction over 5% in well over 18 months, we think 2022 will be tricky for many investors. We see higher oil prices as a tax on the consumer which could act as a headwind to consumer demand; persistent inflation generally adds to this headwind. Rising inflation is also usually accompanied with rising interest rates which the Fed has been promising. This scenario puts long-duration fixed income under continued pressure and should be underweight, in our opinion.

Given this backdrop we are staying with our overallocations to Materials, Energy, and Financials as inflation often favors these sectors. We added Real Estate and Healthcare to our list of overweight areas. We still like Europe and believe that China could bottom next year, powering Emerging Markets higher. We favor quality over lower-grade companies. We like dividend growers over companies that are not earning their dividends. We favor value over growth, and small/mid cap over large cap. We would market weight Technology, Consumer Discretionary and Industrials. Finally, we maintain our underweight in Utilities, Consumer Staples and Bonds.

We are not advocating timing the market; however, there are times to be fully invested and times to raise a bit of cash. We think there will be better entry points in 2022 as the inevitable drawdown will likely show its head. We believe leverage should be avoided at this time. Finally, keep an eye on high yield as it tends to be correlated to equities. The spread over Treasuries for high yield is close to an all-time low, meaning that the yield that you receive for taking the extra credit risk is skinny. Corporate balance sheets remain very healthy but a downturn in the economy could make the spread widen and prices decline.