The climate change money continues to pour in…

The six-year plan is mostly focused on green transportation and cleaner energy.

And that’s just the latest news…

In November, Reuters reported that “banks, insurers, and investors with $130 trillion at their disposal pledged to put combating climate change at the center of their work.”

Whether or not you think climate change is a big deal, it’s important to look at the investment opportunity it’s creating.

Most investors think green energy stocks are the #1 way to play this trend, but that's not the case.

Green energy stocks have been a disaster... See for yourself.

This chart shows the performance of the Invesco Solar ETF (TAN)—a fund that invests in a basket of solar stocks.

You can see that TAN has been falling for the past year. 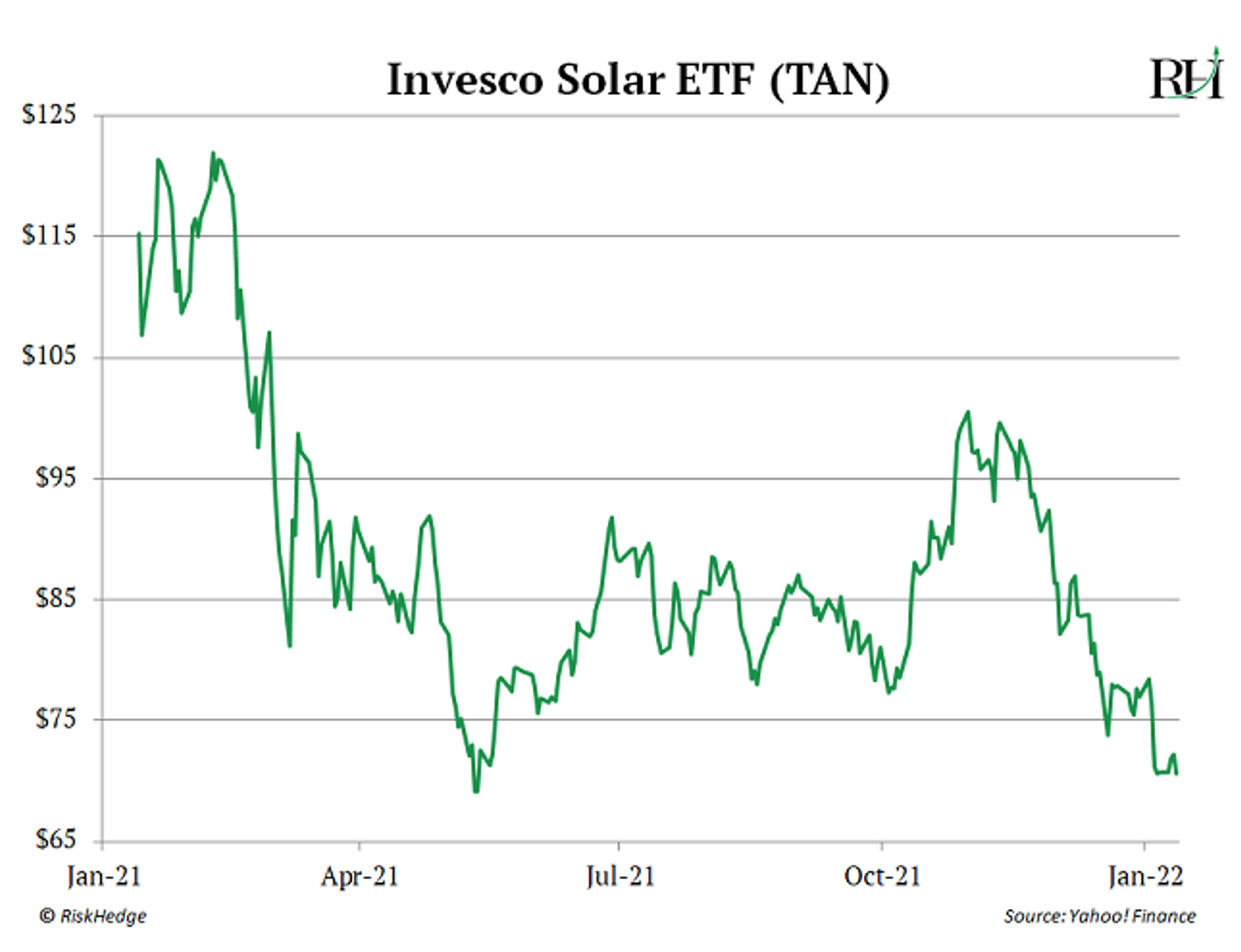 The same is true of other green energy stocks.

This chart shows the performance of the iShares Global Clean Energy ETF (ICLN). This fund invests in a basket of clean energy stocks, including Plug Power (PLUG) and Vestas Wind Systems (VWS).

Its chart is almost identical to TAN’s. 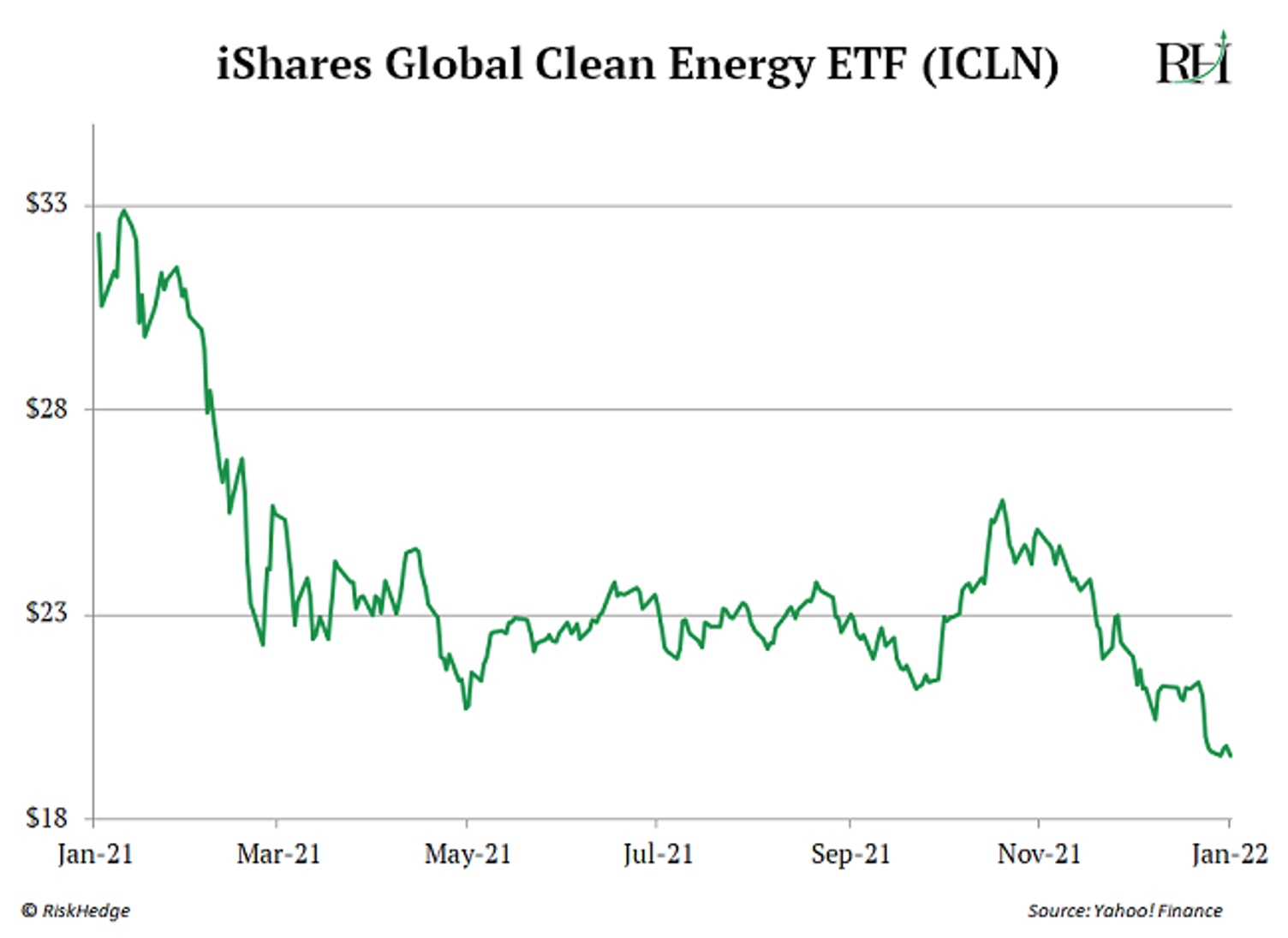 Now, to be fair, both charts look like they were starting to bottom out last month.

Today, both ETFs are breaking down.

However, that doesn’t mean green energy won’t play a major role in combating climate change in the years to come.

According to Morgan Stanley, the world needs to spend $50 trillion by 2050 “to slash emissions and meet the Paris Agreement's goal of halting global warming.” So, big money will continue to flow into the solar and wind industries.

But that doesn’t mean you should buy these stocks while they’re trending down.

Uranium is my #1 way to profit off climate change…

Nuclear power plants use uranium as fuel to produce electricity. Now, I realize a lot of folks are turned off by nuclear energy. They view it as dirty and dangerous.

In fact, many folks automatically think of the Chernobyl disaster or Three Mile Island when they hear the word “nuclear.” But disasters like those are extremely rare.

And they keep people from recognizing one of the cleanest energy sources on the planet.

According to the International Panel on Climate Change, nuclear power produces less air pollution than solar, wind, or hydro.

Those big “smoke stacks” at nuclear plants are just cooling towers for the nuclear power process. The steam drifting out of nuclear plants is as harmless as the steam from your shower!

In short, nuclear energy is one of our planet’s best hopes of combating climate change.

At the same time, nuclear power is an incredibly rich energy source. The 94 nuclear reactors in the US generate twice as much clean energy as every solar panel, wind turbine, and other clean energy source combined!

So, why aren’t we hearing about uranium stocks? There are a couple reasons…

One, uranium is a tiny niche market. Cameco (CCJ)—the biggest company in this space—is worth just $9 billion. That’s nothing compared to the world’s biggest oil companies. Even leading green energy companies are many times bigger than that.

Uranium stocks have also been out of favor for years.

But uranium has woken up in a big way…

The chart below says it all. You’re looking at the performance of the Global X Uranium ETF (URA), a fund that invests in a basket of uranium stocks. 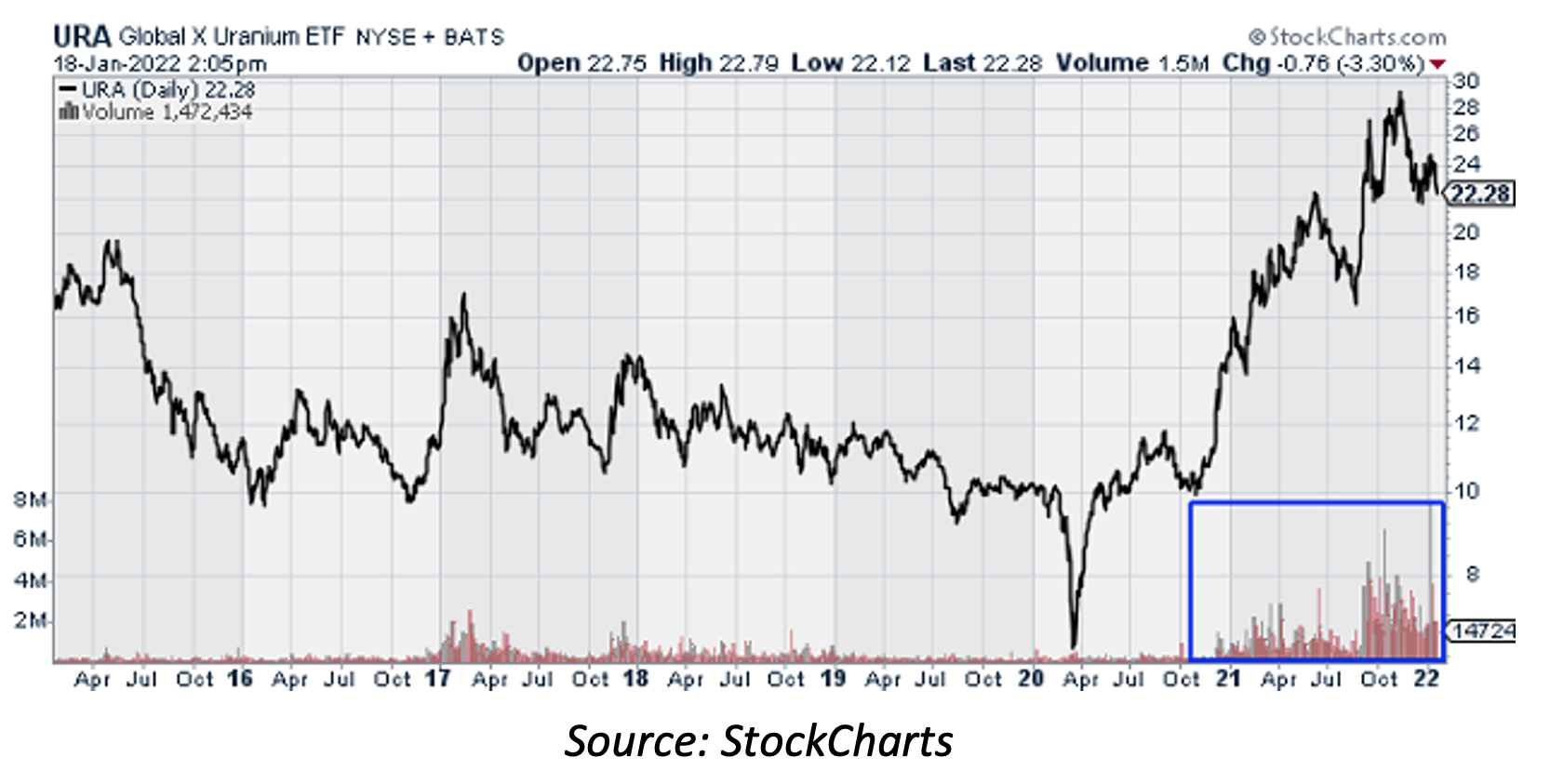 This is one of the most bullish long-term charts you’ll find. As you can see, URA is emerging from a massive base it’s been building since 2016.

As long-time readers know, I love buying stocks as they’re climbing out of huge bases… since these names often run for years.

Of course, I’m not the only one getting seriously interested in uranium stocks.

Notice how the buying volume in URA (bottom vertical bars in the chart above) has surged over the past year. That’s incredibly bullish. It tells us serious interest is returning to uranium stocks for the first time in years.

This is an opportunity you don’t want to miss…

Today’s uranium price is about $45/lb. If it goes on another run, it could get within reach of those 2007 highs.

If you want to speculate on higher uranium prices, URA is the simplest and safest way to do this.

Related: Don’t Let Journalists Turn You Away From This Early-stage Tech Opportunity