The End of China’s Disinflation

Deglobalization is real and the rate at which it will manifest is accelerating.  The recently announced meeting next week in Uzbekistan between Xi and Putin adds to the growing body of evidence that the two nations will fend off their respective growing risk of isolation by more closely aligning.  In a deeply inter-connected world of global supply chains, any step China makes toward aligning itself more closely with the Russia and its willful pariah status should be troubling to financial markets.

In their new book: Danger Zone – The Coming Conflict with China, Hal Brands and Michael Beckley write “China for its part, has been pursuing hedges against strategic isolation.  It has built an entente with Putin’s Russia, another angry revisionist autocracy with a penchant for aggression and a talent for making enemies.  That partnership features deepening economic, technological, diplomatic, and military cooperation beyond what most western observers would have predicted a decade ago.  It features tacit agreement that Beijing and Moscow won’t make trouble for each other along their once-contested border, so that they can maximize the trouble they make for the United States and its allies across Eurasia and beyond.  On the eve of Russia’s invasion of Ukraine, Xi Jinping and Vladimir Putin declared their friendship had ‘no limits’”.

The chart below courtesy of Robin Brooks Chief Economist at IIF illustrates the important point that China’s exports to Russia are still growing y/y. 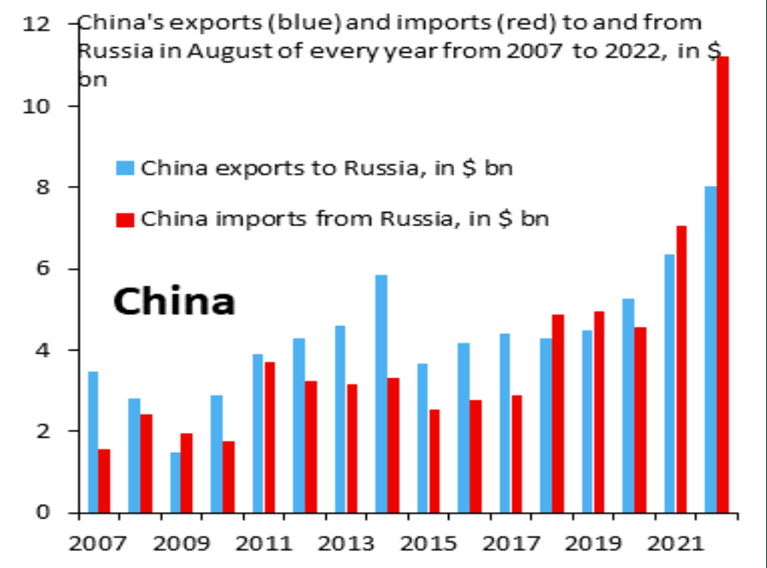 Why does all of this matter to financial markets? Because as Credit Suisse’s Zoltan Pozsar wrote recently, ”Thus, with slight exaggeration, the low inflation world stood on three pillars: first, cheap immigrant labor keeping service sector wages stagnant in the U.S.; second, cheap goods from China raising living standards amid stagnant wages; third, cheap Russian gas powering German industry and the EU more broadly.”  Pozsar goes on to write, “It’s time to think more about the risk of inflation staying higher for longer due to economic warfare, and less about inflation being driven by a messy re -opening process and stimulus.”

As I’ve discussed in the past, over the last forty years, the global economy has enjoyed the massive disinflationary and productivity benefits of China and Eastern Europe’s integration into the global economy.  Suddenly, those benefits are beginning to reverse, and it is hard to overstate the implications for inflation.  US and European multinationals have no other choice but to build redundancies into their supply chains and to make plans to move production to friendlier geographies.  The economics 101 result will be higher costs and those costs will be passed along to the consumer.

The tail risk national security experts fear in all of this is that China will embark on some sort of effort to gain control over Taiwan via blockade and coercion or even by invasion.  One of the core arguments made by Brands and Beckley in their book is the assertion that global powers tend to be most dangerous when they are on the cusp of decline and that does appear to be the case with China presently.  The property market which represents as much as 30% of Chinese GDP and, more importantly, serves as the core means of savings for Chinese individuals continues to implode.  To date, measures taken by the central government to shore up the property market have failed to stem the collapse in transactions and property prices.  Vacancy rates are north of 20% across the country at a time when the working age population is shrinking.  Confidence in the property market has collapsed and there is little the government can do to change that.

I certainly don’t claim to have any idea what Xi will choose to do in regard to Taiwan, but I have found zero experts that believe there is any likelihood that Xi will renounce their claims.  What is increasingly apparent is that China is willing to more closely align itself with Russia and therefore embark on a future that is more antagonistic to the West than at any other point in post-war history and that has meaningful negative implications for a rapidly evolving global financial system.  Pozsar’s thesis of “Economic warfare” may be hyperbolic but the trend, in this case, is not your friend.