Siegel On Why Stocks Could Rise 30%

During a recent CNBC interview, Jeremy Siegel suggested stocks could rise another 30% before the boom ends. Just when it seems like “euphoria” can’t get much more “euphoric,” every bullish guest in the financial media attempts to “out bull” the previous.

“It isn’t until the Fed leans really hard then you have to worry. I mean, we could have the market go up 30% or 40% [this year] before it goes down that 20%. We’re not in the ninth inning here. We’re more like in the third inning of the boom.”

Such isn’t the first time someone has made these types of predictions.

“Despite all of the recent ‘bubble talk,’ it is entirely possible that stocks could rise 30% higher from here. However, it is not because valuations are cheap. As I discussed in my recent analysis of Q3 earnings, stocks are trading near 19x trailing earnings.”

Of course, the reason at that time was more “Quantitative Easing” from the Fed. Bernanke was rapidly expanding its balance sheet as automatic spending cuts from the “Debt Ceiling” comprise started.  However, the “fiscal cliff” never occurred, and massive amounts of liquidity flowed into asset markets instead.

While Siegel makes some valid points about the coming economic expansion due to massive fiscal liquidity, there are significant differences in the technical and fundamental underpinnings.

In 2013, as noted above, valuations on stocks were around 19x trailing earnings. While certainly expensive, valuations had not yet eclipsed previous “bull market” excess of 23x earnings. As shown below, even if we assume no increase in the index price, the market will remain well above 20x earnings over the next two years. 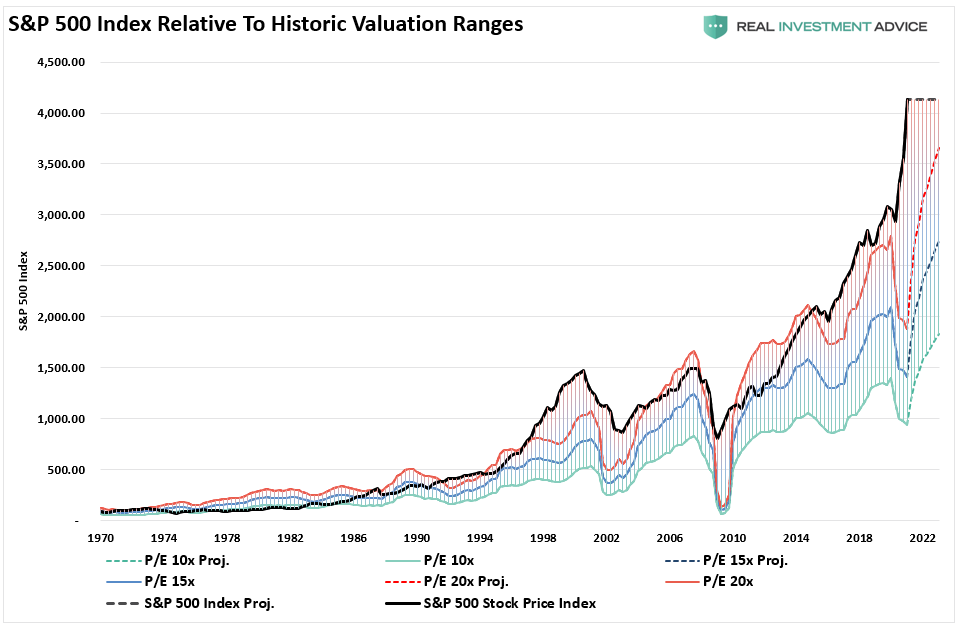 It is worth noting that historically when the market has traded at such a deviated level from valuations, forward returns have not been good.

Furthermore, earnings are currently trading well above the long-term exponential growth trend, and expectations are earnings will surge to a new peak by EOY 2022. Given this deviation from the long-term trend, it leaves a good bit of room for disappointment. 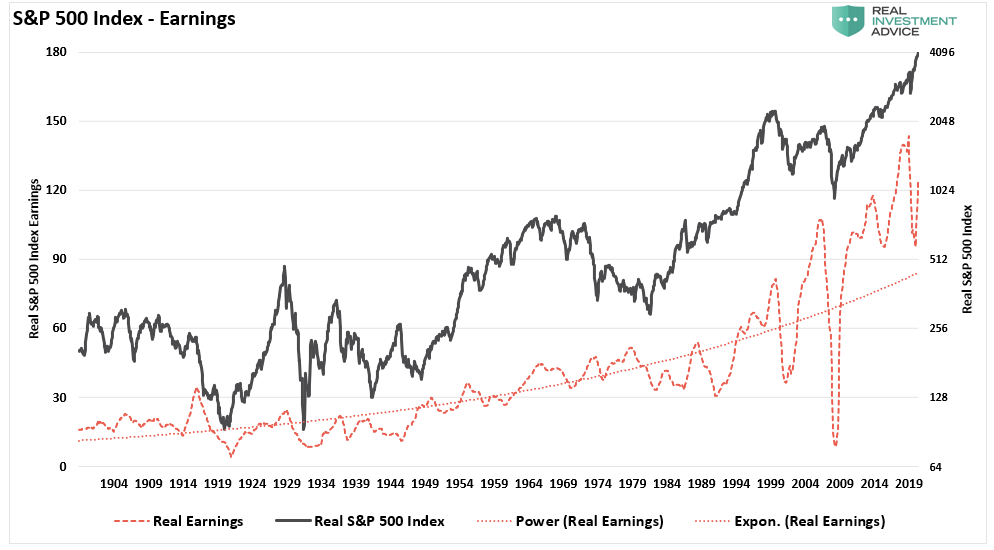 The chart below overlays the “inflation-adjusted” S&P 500 index over the long-term valuation bands. The current excess valuation levels rival that of some of the most critical mean reversions in history. As Carl Swenlin noted recently:

“Historically, price has usually remained below the top of the normal value range (red line); however, since about 1998, it has not been uncommon for price to exceed normal overvalue levels, sometimes by a lot. The market has been mostly overvalued since 1992, and it has not been undervalued since 1984. We could say that this is the ‘new normal,’ except that it isn’t normal by GAAP (Generally Accepted Accounting Principles) standards.” 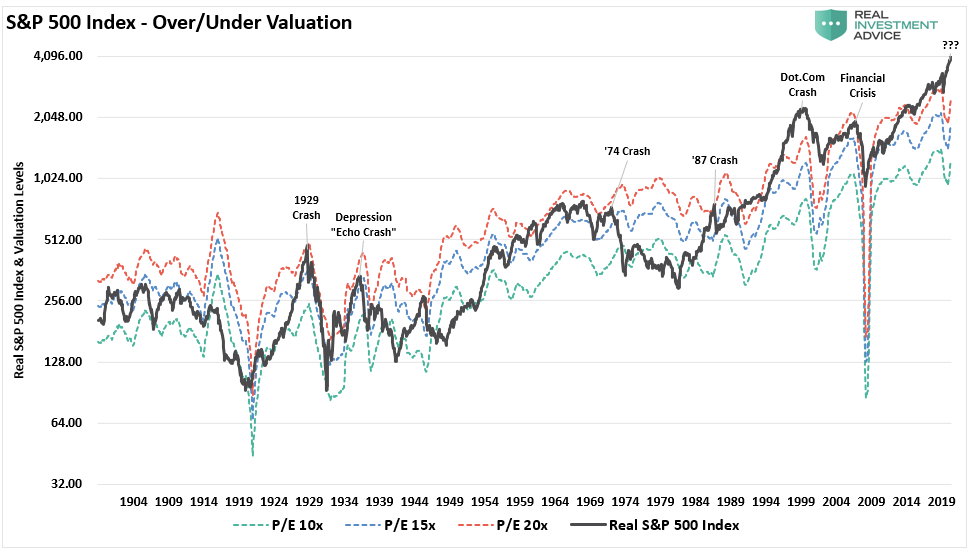 The hope, as always, is that earnings will rise to justify the over-valuation of the market. However, when earnings are rising, so are the markets. As such, the reversions always occur with prices catching down to earnings.

As Carl noted, there is nothing normal with GAAP earnings. Of course, today, most companies report “operating” earnings which obfuscate profitability by excluding all the “bad stuff.” However, as discussed previously, there is a tremendous amount of manipulation in both operating and reported earnings. To wit:

“The reason companies do this is simple: stock-based compensation. Today, more than ever, corporate executives have a large percentage of their compensation tied to stock performance. A “miss” of Wall Street expectations can lead to a large penalty in the companies stock price.

In a survey conducted with corporate executives, 93% of the respondents pointed to ‘influence on stock price’ and ‘outside pressure’ as the reason for manipulating earnings figures.”

The following table shows the expectations for reported earnings growth:

The chart below uses these earnings estimates and assumes NO price increase for the S&P 500 through 2022. Such would reduce valuations from 43x earnings currently to roughly 23x earnings in 2022. (That valuation level remains near previous bull market peak valuations.) 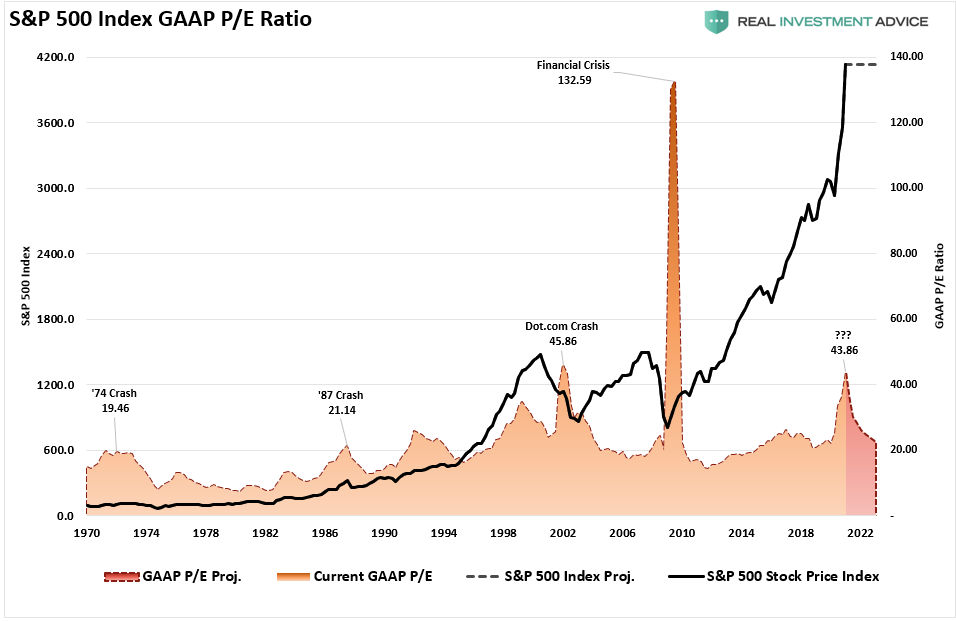 As I stated above, investors always bid up prices as earnings increase. With earnings expected to double over the next two years, and if we assume Siegel is correct in his 30% advance, the picture changes. Instead of valuations declining, the increase in price keeps valuations near 30x earnings. (Note: While Siegel discussed a 30% increase over 12 months, I have spread it out over two years.) 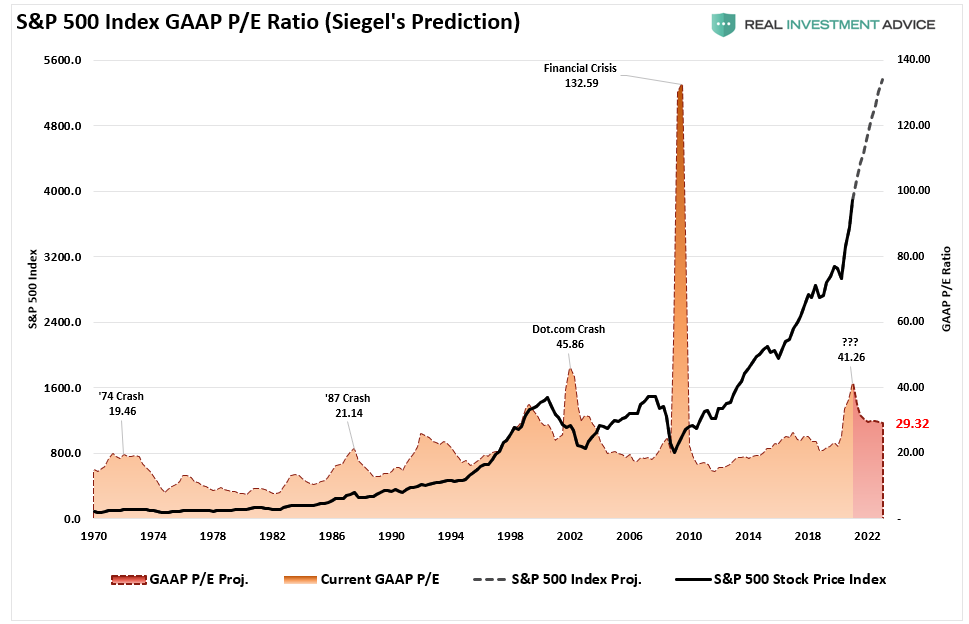 If Siegel is correct, a 30% advance will further exacerbate already extreme technical deviations.

“This time is different” is often the phrase most heard near market peaks. The reason is that it takes time to change psychology embedded during the previous “bear market.” However, once the “fear” is displaced by “greed,” the ensuing “bull market” leads investors to take on increasing levels of risk. Unfortunately, the reality is that eventually, the price reverts to reflect underlying economic and fundamental realities.

What causes that reversion is always unknown. However, it is generally a credit-related event that leads to a rush to protect capital. As I explained in “Fully Invested Bears:”

“Such is the consequence of the Federal Reserve’s ongoing interventions. Portfolio managers must chase performance despite concerns of potential capital loss. In other words, we are all ‘fully invested bears.’ We are all quite aware this will eventually end badly. However, in the short-term, no one is willing to take the risk of being grossly underexposed to Central Bank interventions.”

With the markets significantly deviated from long-term means, the following “reversion” will likely be a reasonably brutal event. As shown below, the market is currently trading nearly 20% above its one-year moving average. Such has only occurred a few times historically and has preceded corrections and outright bear markets. 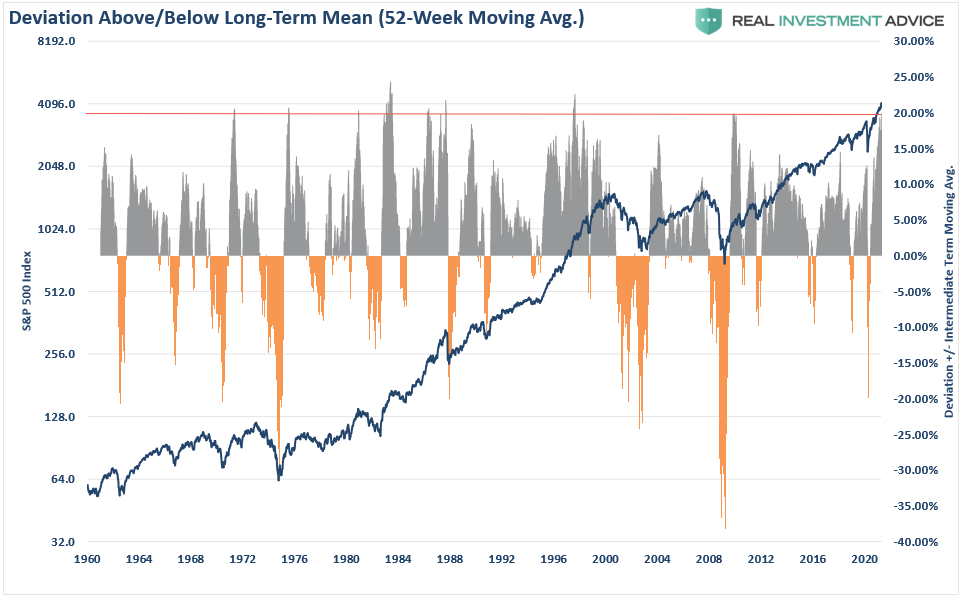 The market is also trading more than 25% above its 24-month (2-year) moving average. Such has previously only occurred a couple of times previously (1987 and 1999.) 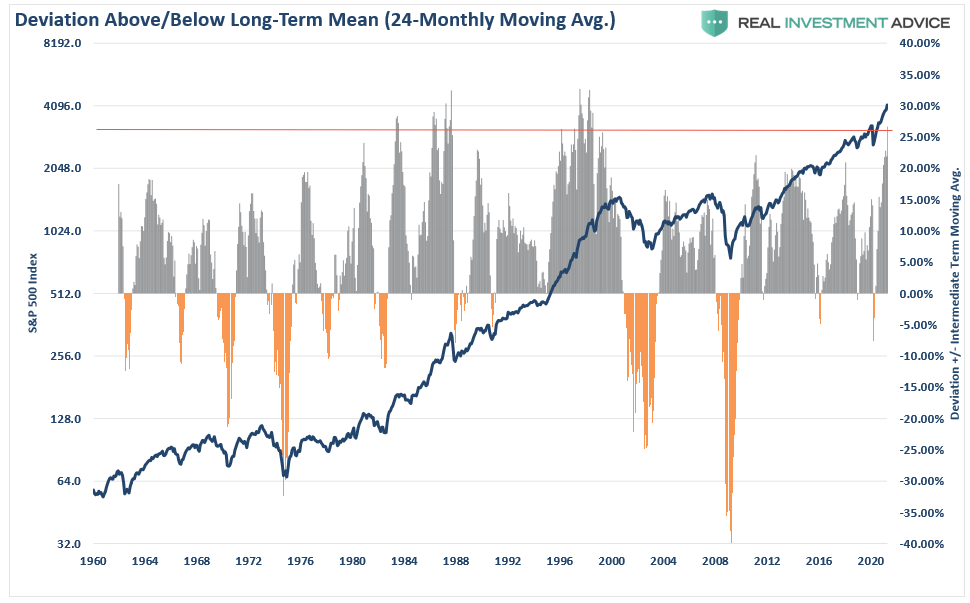 From a technical perspective, such is simply a reflection of current market psychology. That psychology is exceptionally bullish and very lopsided in terms of equity risk allocations. With the market “priced for perfection,” such leaves investors at risk of disappointment.

For Jeremy Siegel, making wild predictions about markets has no consequence. If he is wrong, he makes another prediction to cover for the first. However, for you, following such a prediction can have a devastating impact on your short- and long-term financial goals.

The reality is that markets are pushing “rarified air.” It is unlikely that corporate earnings will achieve the lofty goals set out by analysts currently. It is also very probable that economic growth may be weaker than expected. Of course, these are just “concerns” of an overvalued, extended, and overly bullish market.

Sure, the current cyclical bull market could rise another 30%.

Momentum-driven markets are hard to kill in the latter stages, particularly as exuberance builds. However, they do eventually end.

Will the market likely be higher in another decade from now? Maybe. However, if interest rates or inflation rise sharply, the economy moves through a normal recessionary cycle, or if Jack Bogle is correct, things could be much more disappointing. As Seth Klarman from Baupost Capital once stated:

We saw much of the same mainstream analysis at the peak of the markets in 1999 and again in 2007. New valuation metrics, IPO’s of negligible companies, valuation dismissals as “this time was different,” and a building exuberance were common themes. Unfortunately, the outcomes were always the same.

“History repeats itself all the time on Wall Street”  – Edwin Lefevre

Related: Is BofA Right About A Market Drop To 3800?