Reopening: The Markets vs Our Economy

As we enter the month of March, we also mark a full year of COVID-19 related restrictions on businesses, schools, and social functions. Somehow it feels like time has dragged on and yet simultaneously flown by.

I thought the above quote was quite fitting for today’s environment, but I was going between that and another appropriate line “Sometimes I've believed as many as six impossible things before breakfast”. It most certainly feels like the world has collectively begun believing a multitude of impossible things.

Afterall, it is hard not to think the world has gone mad when a ‘cryptocurrency’ with a dog as a mascot, that was literally made as a joke, increases in value by over 2,000% in a matter of a couple months. Its total value at the peak reached over $10 Billion….It is still valued at over $6 Billion at the time of this writing.

Similarly, you have collectibles such as trading cards where some are exchanging hands at values more than 20 times higher than they went for just a year earlier1. A Basketball card of Luka Doncic of the Dallas Mavericks recently sold for $4.6 Million. This set a record for the most expensive basketball card ever sold by more than double the previous record2. The price of that card represented more than half the annual salary the Dallas Mavericks pay Luka Doncic to actually play for their team.

I could go on and on about the seeming absurdity in the collectible space that is brimming with examples of artificial scarcity. Although, this may simply be an inevitable symptom of the extremes which inequality has reached more than anything.

Crazy is a Relative Term

In light of those previous examples it might not seem as odd that despite a full year of global travel and business restrictions, the market (as measured by the S&P 500) was actually UP over 20% from the start of 2020 through this February.

However, that does not mean the markets haven’t gotten ahead of themselves. Afterall, the analysis you hear now is simply discussing how long it will take to get back to normal or how to get back to previous levels of economic activity. That is the upside being discussed, not how long until our economy is better off than before. Yet the market is already priced for that improvement and priced for a future brighter than the start of 2020 when it wasn’t even paying attention to the threat of COVID-19.

Reopening: Markets vs Our Economy

As we mentioned in our last letter back in August, a lot of this discrepancy between the economy and the S&P 500 returns can be explained by the fact that the businesses making up the S&P 500 are not necessarily that related to the part of the economy and small businesses that make up our everyday lives and employment.

The chart below gives a look at the performance of the S&P 500 by sector and industry from the start of 2020 prior to Covid through this February. You can see the industries you would expect such as hotels, airlines & real estate (REITs) are negative….although maybe a little surprising they are down less than 20%. 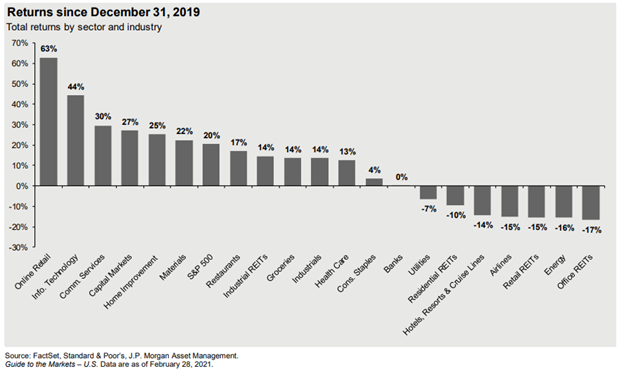 However, again this is only a breakdown of companies in the S&P 500, many smaller companies not included in the index or those small businesses that have no publicly traded stock at all (those most affected by the COVID restrictions) have been decimated.

That is why it might be prudent to question the assumption that the reopening of the economy will be a boom to the stock market. Those businesses we are all eager to get back to and frequent in our daily lives have little to do with the stock market. Those vacations we are eager to take? Yes, many of those hotels and airlines are publicly traded stocks, but their returns have little impact on the returns of S&P 500 that you hear about on TV.

In fact, Airlines make up less than 0.5% of the S&P 500. Hotels? Less than 0.25%. Real Estate (REITs) just over 2%. Restaurants are just over 2% but even then most of those are fast food places that likely benefited due to sit down restaurants being closed or highly restricted.

If we add up the weighting of Airlines, Hotels, Casinos, Real Estate, Restaurants, Cruise & other travel services, we don’t even get up to a 5% weighting in the S&P 500. Even the whole energy sector which has taken a toll from reduced mobility makes up less than 3% of the index.3

All of this is to say...the market is not the economy and a reopening of these sectors of the economy, which have a large impact on our daily lives, may not necessarily have as large of an impact on the markets.

In fact, you could even argue those that have kept their jobs and have excess savings could be liquidating their savings (including stocks) to fund these expenditures and that spending won’t all be going to publicly traded companies or companies that have an impact on market returns. Don’t get me wrong, a reopening is great for our economy (and let’s be honest, our mental wellbeing!) but to extrapolate that to the market might not be warranted.

A Year of Reflection

The last 12 months have definitely been a whirlwind. So much change, so much adaptation, and a time for reflection to what really matters in our lives. Maybe for some it is what we have missed. For some, it is who we have lost…..and for others it is a re-realization of what we have always had.

While a lot has changed, we continue to understand one constant truth in the markets....risk always exists. While we cannot eliminate risk, we can help manage it. We remain committed to a disciplined asset allocation plan grounded in each of your individual goals and objectives

We, just like you, look forward to a slow return to some version of normalcy. We realize that this last year has had a huge effect on everyone and encourage you to let us know if there has been any change in your financial priorities so we can keep your plan optimized for your long-term goals.