Predictions of a Theory of Behavioral Finance

A little over six weeks ago I published A Theory of Behavioral Finance. Subsequently, I have been considering each of the high level points of the Theory in greater detail in individual articles. Today’s article about the Predictions of a Theory of Behavioral Finance concludes this series. I am combining these pieces into a larger whitepaper that is soon to be available for download.

In my discussion of the Theory’s assumptions there were major factors identified contributing to reactive-oriented, rather than response-oriented, that the conclusion was that people are biased because of a small number of critical factors (refer back to the supporting articles for the details). These factors may be concisely expressed as due to a survival imperative people evolved with a preference for:

Each of these major factors are also therefore, the basis of a series of predictions. Namely:

Notice that each of these are framed on a continuum from more biased to less biased. This means that research based on these continuums allows researchers to test the causal nature of each key factor relative to biases.

More practically, this also means that as an investment practitioner, if you seek to mitigate the behavioral biases to improve your decision-making, that you need simply to counter the factors. That is, your research staff: need more time and energy; should have higher levels of cognitive diversity and psychological safety; and they should be hired, in part based on their ability to change their habits and their level of self-awareness. In fact, I would argue that if these considerations are satisfied that another prediction is that the investment results of such individuals and teams is higher than that of average individuals and teams.

An excellent review of the literature reviewing the relationship between time available and decision-making quality is provided in Ordóñez (2015).[1] First of all, they make a distinction between time constraints and time pressures. Constraints refer to externally imposed limitations on our ability to take time to make a higher quality decision. Whereas, time pressure refers to the psychological reaction that a person has when she or he believes the amount of available time is less than the amount she or he believes is necessary to perform a task. Germane to Prediction 1a, they summarize an entire body of research stating:

“Research suggests that people have strategies, if limited, for coping with time constraints and, presumably, with any resulting sense of time pressure. For example, they process information more quickly, become more energetic and anxious, and become more or less conservative in their risk-taking proclivity. Decision-makers under time constraint have been shown to switch to simpler strategies, stay with the same strategy if switching strategies would incur a cognitive cost, or simply fall back to old habits.”

“Payne et al. provided strong evidence of the ‘adaptive decision maker,’ who selects from a set of strategies that trade effort for accuracy…[I]f time constraints are imposed or information costs are high, decision makers will switch to simpler, non-compensatory strategies…in which they consider only the most important variables and truncate a decision quickly, devoting less time and cognitive effort.”

So, Prediction 1a is supported by an entire body of scientific evidence.

Research evaluating the causal relationship between a lack of energy/fatigue and behavioral bias was conducted by Hirshleifer, et al. (2020).[2] They tested whether decision fatigue – the tendency for decision quality to decline after an extensive session of decision-making – causes stock market analysts to be more heuristic in their forecasting. Net: “We find that forecast accuracy declines over the course of a day as the number of forecasts the analyst has already issued increases. Also consistent with decision fatigue, we find that the more forecasts an analyst issues, the higher the likelihood the analyst resorts to more heuristic decisions by herding more closely with the consensus forecast, by self-herding (i.e., reissuing their own previous outstanding forecasts), and by issuing a rounded forecast.”

Again, there is evidence in support of Prediction 1b.

Multiple researchers link higher levels of cognitive diversity with better group decision-making. That said, there are limits as discussed in my A Theory of Behavioral Finance and its assumptions. For example, because of energy conservation, time conservation, a need for psychological safety, and above all, working memory constraints, group decision making is best when done in a safe space where the group members are small in number.

That said, if we join in groups to increase the chance our genes propagate into the future, then the greater the cognitive diversity of these groups the better the decision-making must be. Deloitte[3] recently found in a large scale survey of 105 business leaders found that: “an increase in individuals’ feelings of inclusion translates into an increase in perceived team performance (+17%), decision-making quality (+20%), and collaboration (+29%).”

While these quotations are from consultancies, scientific journals have also featured research evaluating the importance of cognitive diversity to decision-making quality. What would be nice is if researchers would directly test increases in group cognitive diversity leading to less behavioral bias. Until that occurs, I believe this prediction is not quite conclusive evidence of A Theory of Behavioral Finance.

Doubtless you have heard of Google’s well-known study that circulated like wildfire in the business community several years back that found their highest performing teams all shared only one critical factor: psychological safety. This makes total sense because the entire reason for participating in a group is for survival. Therefore, those that have the highest levels of psychological safety likely also have better survivability/decisions.

Recall that in my article A Theory of Behavioral Finance – Assumption 1 – A Combination of Factors that I quibbled with the claim made by many behavioral finance researchers that the biases cannot be overcome. My confidence in making this statement stems from pioneering research done by Kirk et al.[7] where behavioral biases have been directly tested against meditators. Many researchers of meditators find two primary improvements in practitioners’ abilities: increases in meta-cognition and top-down control. So, that those with increased metacognition, like meditators, would be able to mitigate behavioral bias comes as no surprise.[8]

Of the predictions of the Theory, this is the one that has been directly tested.

Assuming that a person has some level of metacognition, they should be able to more effortlessly change their habits and decision-making. After all, it is that self-awareness that allows people the realizations needed to give themselves more time to make a decision, to ensure they are not fatigued, to better modulate their behavior in groups, to check to see if they are feeling safe emotionally, and so on.

Recall in my exploration of Assumption 3 – The Psychological Factors, I discussed at length the difficulty of changing habits. Specifically, Dunhigg says in his The Power of Habit, “When a habit emerges, the brain stops fully participating in decision making.”[9] Habit loops form to conserve time and energy, and very typically most habits are in place before age 9. But that does not mean that people do not change. We do.

I believe this is self-evident, but more research needs to be done to test whether or not behavioral biases are more easily overcome by those with greater metacognition and top-down control, as Kirk’s work above demonstrated.

The second big prediction of A Theory of Behavioral Finance is that a company’s securities’ prices are much more volatile than would be expected when examining the operating performance of the same company, and that this is due to the behavioral biases of investors. Stated more directly, securities prices are volatile due to investor emotions.

In my co-authored book, Return of the Active Manager, the following chart is offered in support of this prediction:

This chart shows a very simple metric regarding the components of the S&P 500 stock index: the annual 52-week high – the annual 52-week low, divided by the average annual level. That these spreads, even when averaged over very long periods of time are so large is evidence of behavioral bias driving stock prices. This is especially true when compared with the likely very stable operating performance of the components of the S&P 500 over these same time periods. Is it rational, for example, that the actual value – say as measured by total assets – of a very stable business such as Proctor and Gamble would fluctuate by an average of 22.5% over this same time period? No, it is not.

In fact, here is analysis I conducted that examines this point in greater depth: 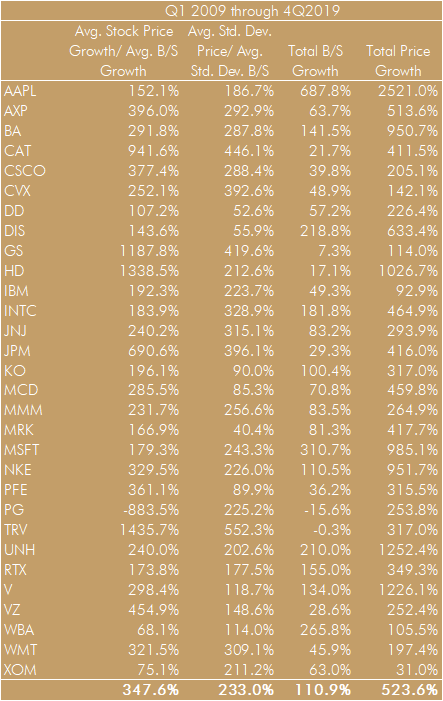 What the above graphic of the DJIA components shows in the second column is the average quarterly growth in each company’s stock price, divided by the average quarterly growth in their total assets. As you can see, with the exception of WBA and XOM (PG’s total assets just barely shrank), every company’s quarterly growth in stock price grew much faster than did the balance sheets. How much? 347.6% faster. Not only that, but the standard deviation of the quarterly stock price growth as compared to the total assets growth is 233.0% as shown in the third column. This means that the stock price series is much more volatile, too. A complaint might be that stock prices are marked-to-market, but that balance sheets are not. Fair enough, but as you can see in columns 4 and 5, the balance sheets, on average more than doubled over the time period, yet the stock price growth was in excess of that amount. In other words, the balance sheets are not stagnant. Not only that, but firms like GS where their balance sheet is almost entirely marked-to-market show very little growth, as compared with the growth in their stock price. Ditto: JPM. No, instead, the conclusion must be that stock market prices are more volatile, and this is likely due to misestimations of value caused by emotions and behavioral biases.

Research conducted by Hirshleifer and Siew (2002),[10] they say the following, in conclusion of their analysis: “This paper has examined the consequences of limited attention for disclosure, financial reporting policy and market trading…Owing to limited attention, such choices can affect investor perceptions and market price. In our approach, investors sometimes neglect relevant aspects of the economic environments they face, such as strategic incentives of firms to manipulate investor perceptions.” In other words, time constraints lead to limited attention, which in turn leads to neglect of crucial information.

In conclusion, A Theory of Behavioral Finance put forth multiple assumptions in support of it. Unique in my approach is that I postulate that behavioral biases have multiple causes, and that to understand and mitigate the biases, we need to understand multiple disciplines. These multiple causes include: biological, psychological, and sociological. The Theory also, to my knowledge, for the first time, advances a number of falsifiable predictions that if tested and confirmed would support the Theory. Most of these predictions already show strong indirect evidence, if not direct. This stands in stark contrast to Modern Portfolio Theory whose assumptions are unrealistic (i.e. people are not 100% rational), and its predictions are not borne out by the data (e.g. see Basu or Shiller).