“What is Internet, anyway?”

Bryant Gumbel asked this on The Today Show in 1994. 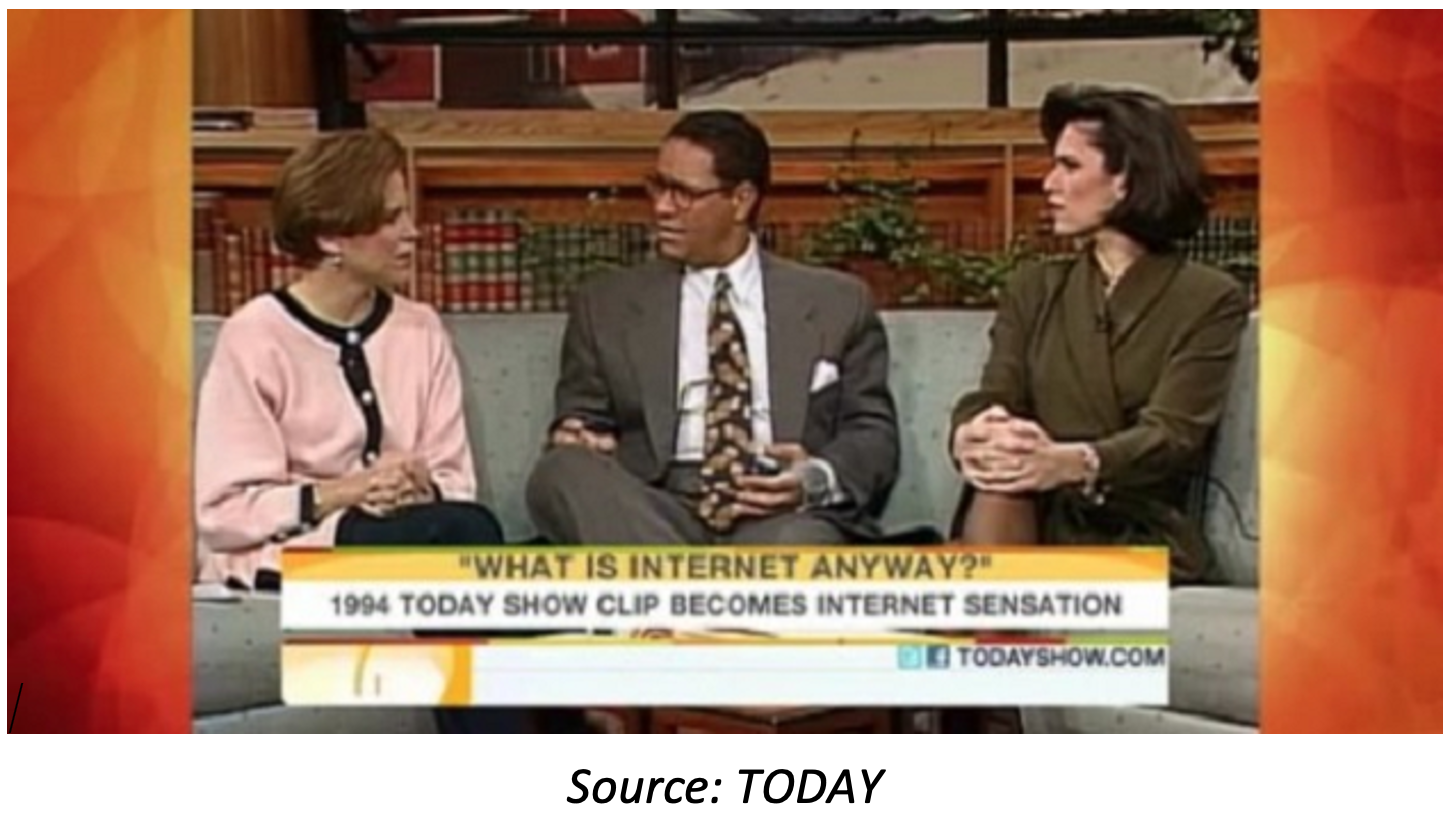 Looking back on this, it’s easy to laugh.

This was long before our lives revolved around the internet.

Most people had no idea what the internet would become. Even fewer folks were thinking about how to invest in it.

But those who saw the incredible potential of the internet went on to create the world’s most important businesses.

Of course, entrepreneurs weren’t the only ones to cash in on the internet. Countless everyday investors made life-changing money as stocks like Netflix rose over 3,000%.

But the truth is, most investors did NOT buy into these incredible stocks early on.

Do you know why?

Because most folks failed to tune out the naysayers.

New megatrends always seem like a joke in the beginning…

When they’re first getting started, world-changing megatrends have far more detractors than supporters.

Those detractors often populate the major media. They’re loud, and they’re everywhere. So, it’s easy to listen to them.

But listening to naysayers is one of the worst mistakes you can make as an investor.

Just imagine if you shrugged off investing in the internet in its early days because some journalist called it a passing fad. 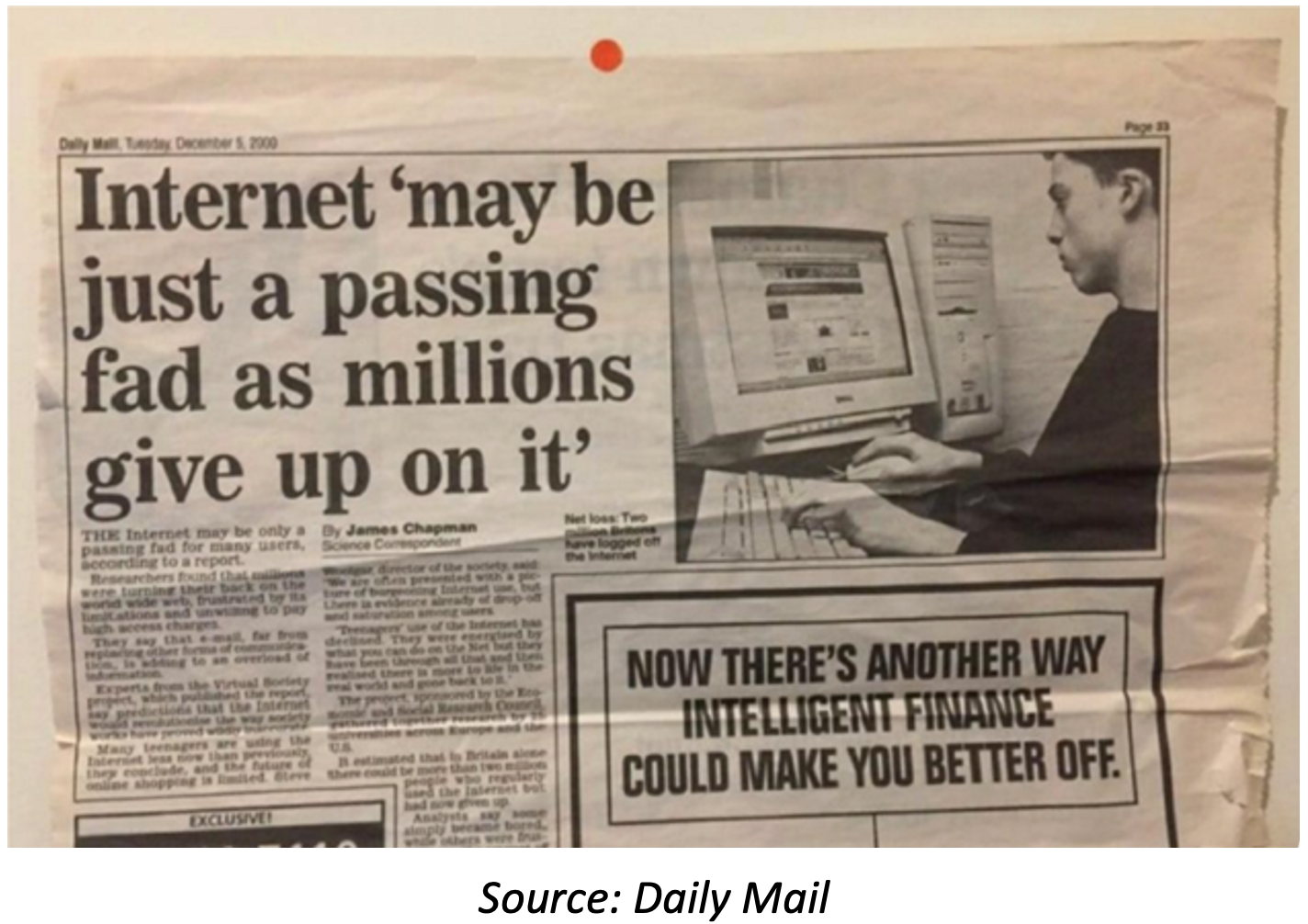 Of course, the internet is just one highly profitable megatrend that was mocked and dismissed during its early days.

Bitcoin is the world’s most popular and valuable cryptocurrency. It was created in 2009.

In its very early days, hardly anyone besides hard-core libertarians and “cypherpunks” even knew about bitcoin. Cypherpunks are a group of folks who believe the privacy-enhancing technology behind bitcoin is a game changer.

Word eventually got out about this underground technology. And once again, journalists, politicians, and even some respected investors were quick to dismiss it as a scam.

Bitcoin has been declared “dead” more than four hundred times, according to website 99Bitcoins. Whether it was worth pennies on the dollar, or over $60,000 per coin, someone wrote an obituary for bitcoin. 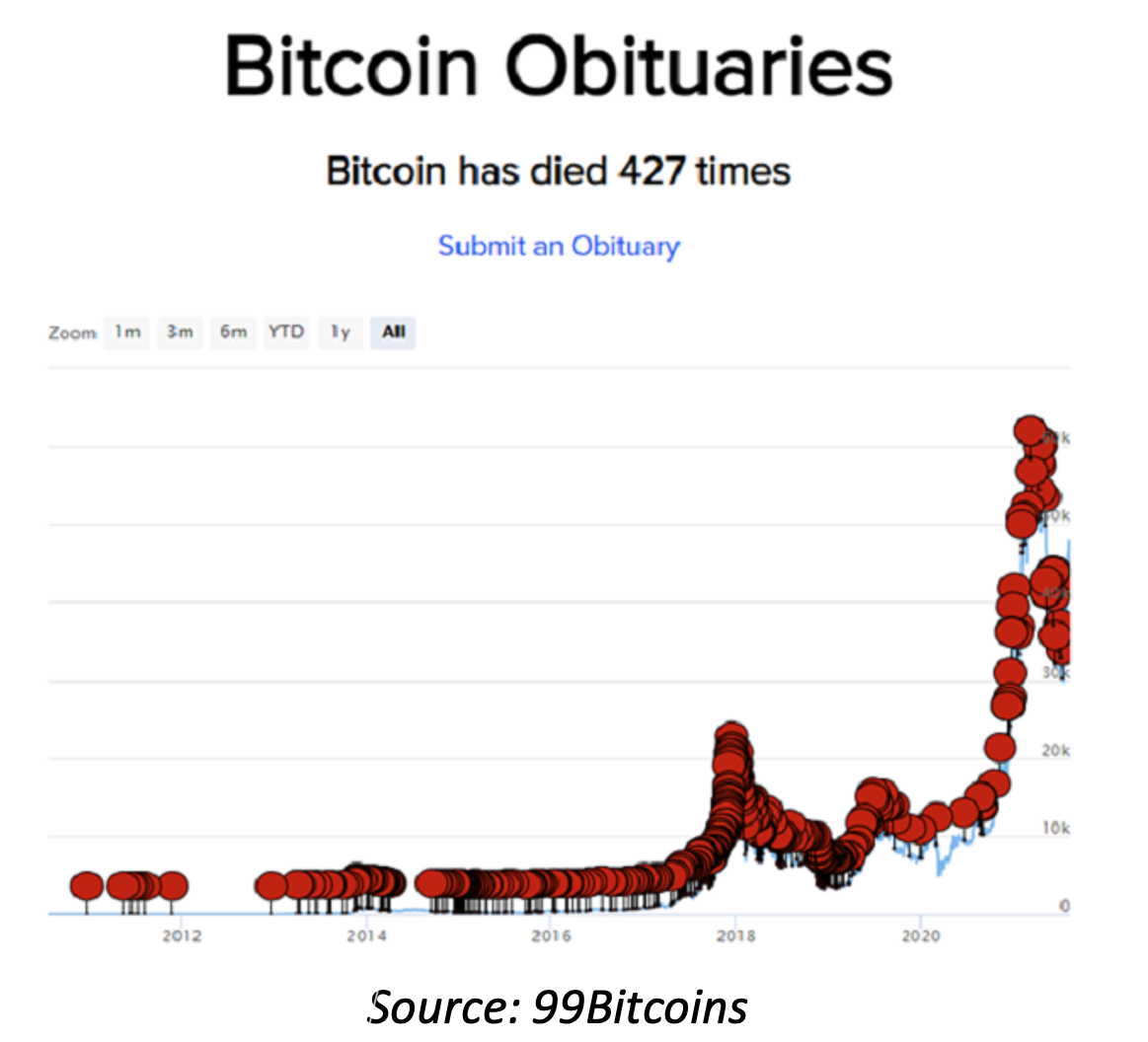 Bitcoin’s incredible rally has also given rise to thousands of other cryptocurrency projects. The secure blockchain technology that’s behind crypto is revolutionizing the way people borrow and lend money.

Of course, very few people recognized the immense potential of cryptocurrencies back in 2009.

The same is true of the internet. Hardly anyone could have predicted that we’d use the internet to interact with our friends and family, and shop for everything from groceries to cars.

So, it’s only fair to cut the journalists some slack.

After all, it’s not like journalists are paid to see the big picture…

The same goes for the talking heads on TV.

Their job is to entertain people. It’s not to help folks envision the future and invest in it.

So, you shouldn’t look to them for investing advice.

I mention all this because another massive money-making opportunity is staring us in the face right now. Just like the internet and bitcoin, it may sound “farfetched.”

But please, don’t dismiss it as a fad.

If you’ve been reading RiskHedge, you know the metaverse is a new, 3D, immersive internet. A virtual world where you, through an avatar, can socialize with other people, work, play, create, and basically exist.

Much of what takes place on the internet today could soon take place inside the metaverse.

And it’s just now starting to get the attention it deserves.

But there are still many folks in the media who are dismissing the metaverse.

Just look at this recent headline from The Guardian. It’s calling the metaverse a “boondoggle,” or a waste of time.

CNN refers to the metaverse as a “dystopian sci-fi idea.”

Now, I understand why some people are so dismissive. For one, it’s still very much the early days for the metaverse. Just like the way folks were skeptical of the early internet, it’s hard to see how the metaverse will reshape every aspect of our lives.

Plus, the only people really using the metaverse right now are children. But more than half of all American children are already playing on the metaverse!

And children are often the first to embrace revolutionary technologies.

We saw this play out with video games and social media.

Now, the same thing is happening with the metaverse. Giant tech companies like Facebook, Google, and Microsoft (MSFT) are at the forefront of this technological revolution.

Facebook is reinventing its entire business around the metaverse.

Earlier this year, Facebook changed its name to Meta. And it plans to spend $10 billion and hire 10,000 people to build out the infrastructure of the metaverse.

Microsoft has had its eyes set on the metaverse for years. In 2014, it acquired the virtual sandbox game Minecraft for $2.5 billion.

Microsoft is also actively building out the “enterprise metaverse.” In a nutshell, it aims to integrate the metaverse with the business world.

Imagine a business that is headquartered in New York with a warehouse in Tokyo. It’s impossible for a worker to visit both locations in one business day.

Microsoft wants to change that through the metaverse.

In short, it will digitally map both places. Then workers could virtually “visit” both locations, no matter where they are in the physical world.

Nvidia (NVDA) has also made the metaverse a top priority. The artificial intelligence pioneer recently launched its Omniverse platform that will allow engineers to develop 3D worlds for the metaverse.

In other words, the metaverse is going to be worth tens of trillions of dollars.

We’re looking at the next evolution of the internet—an internet that you can live in.

The metaverse will be a space where everyone can socialize, work, play, and create.

At this point, you must ask yourself, “Who’s more likely to be correct about the metaverse?”

Will it be the naysayers doubting this new technology?

Or the companies and entrepreneurs who are taking risks, investing their own money, and reshaping their entire business models to accommodate it?

My money, as always, is on the visionaries.

Related: The Real Reason Facebook Just Went “All In” on the Metaverse